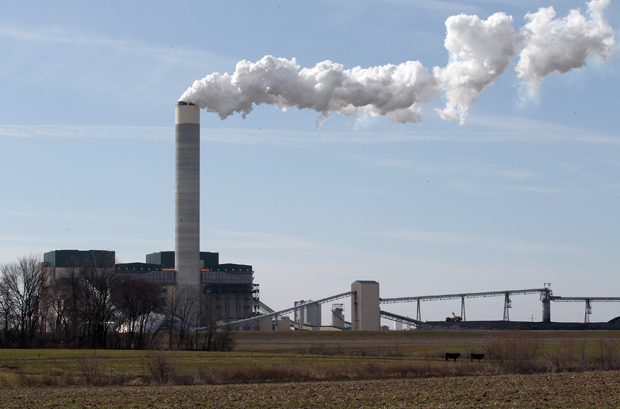 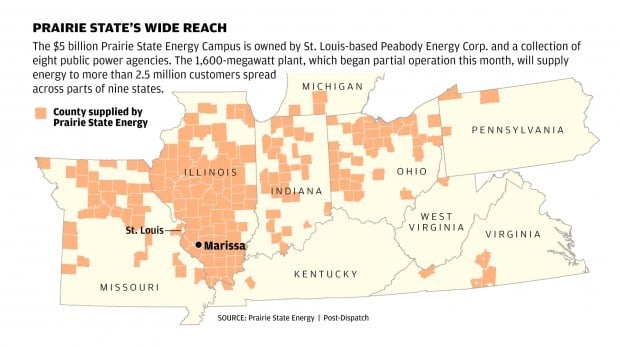 Back in 2006, plans for the Prairie State Energy Campus, a hulking coal-fired power plant on farmland in Washington County, Ill., seemed serendipitous for the city of Kirkwood.

The St. Louis suburb needed a stable, long-term power source. The plant’s developers needed customers. The parties struck a deal — a 30-year contract that would supply more than half of Kirkwood’s electricity beginning in late 2011. The kicker: The energy produced at Prairie State would be cheap compared with market power prices at the time.

But now, as the first of two 800-megawatt generating units at Prairie State begin operations — six months late — the plant hardly seems the bargain it did five years ago.

The $5 billion price tag is 25 percent more than when the city signed on, driving up the price of electricity that Kirkwood and other cities are obligated to buy. And construction delays mean the city is getting nothing for the monthly $296,000 checks it began writing to Prairie State’s owners in February.

To be sure, a lot has changed since 2006 — market shifts no one saw coming. Natural gas prices plunged to the lowest level in a decade, and the market price of electricity has fallen, too. And the Great Recession took a big bite out of electricity demand, which has yet to fully recover.

Still, some cities that bought into the project say they don’t feel even a tinge of buyer’s remorse. “This is a marathon, not a sprint. We’re not just talking 10 years. We’re talking 30 years, because that’s what our deal is,” said Mark Petty, electric director for Kirkwood, which committed to a 25-megawatt slice of the plant.

Officials in other cities aren’t so accepting of losing money in the short term.

“We’re in almost a million and a half bucks, and we don’t have a dime of revenue,” said Bob Stevenson, director of Hannibal’s Board of Public Works. “All I can say is, I had other plans for that money.”

Kirkwood and Hannibal are among more than 150 municipal utilities and electric cooperatives across nine states that are married to the Southern Illinois coal plant for decades. They include Columbia and more than 40 other towns scattered across Missouri.

Petty said Kirkwood’s rates, which have traditionally tracked those of Ameren Missouri, allow the city to make its Prairie State mortgage payments and still earn a profit. That’s not the case everywhere.

The Tri-County Electric Cooperative, which distributes electricity in three Southern Illinois counties, is boosting rates by 15 percent over two years, mostly to help offset higher energy prices as a result of its commitment to Prairie State. In the Chicago suburb of Batavia, bills are going up $8 to $21 a month to cover Prairie State costs.

The increases in Illinois stand in sharp contrast to lower electricity rates at municipal utilities elsewhere in the state, which are taking advantage of depressed power markets.

Next door in Missouri, Hannibal is raising rates for residential customers by 3 percent next month to offset the effect of construction delays.

Contracts between Kirkwood, Hannibal and Prairie State actually go through the Missouri Joint Municipal Electric Utility Commission, a state-chartered entity that buys bulk power for dozens of municipal utilities. The commission is among eight public power agencies that bought stakes in the project from Peabody Energy Corp. It owns a 12 percent share financed through the sale of $835 million of bonds backed by long-term contracts to sell the power to its member cities.

Unlike investor-owned utilities, such as Ameren Missouri, city-owned utilities aren’t subject to scrutiny by state regulators or consumer advocates who watch out for the interests of rate-payers.

The “take or pay” contracts, standard for large-scale power projects such as Prairie State, are favored by lenders and credit rating agencies because they provide assurance that the borrower pays its debts. They also require end users, in this case municipal utility customers, to make debt payments regardless of whether the plant is operational. And if any of the cities default, a “step-up provision” in the contract requires remaining cities to pick up that city’s share of the payments.

A DRAIN ON RESERVES

Hannibal’s payments of $250,000 a month began in February, even though the first unit at Prairie State didn’t begin operation until June 5. The payments ate a hole in the city’s cash reserves. Hannibal, like other cities, could see more financial pain after August, when its payments double to $500,000 as Prairie State’s second unit is supposed to go online.

But that launch likely will be delayed, too. In financial disclosures to bond investors, the plant’s owners said a large fan that moves exhaust through the plant’s emissions system failed on March 27. Bechtel, the lead contractor, said it could take as long as 30 weeks to get replacement parts and four to six weeks to make repairs. A Prairie State spokeswoman said the second generating unit is now scheduled to begin operation by the end of the year.

That could leave Hannibal and other cities paying out hundreds of thousands more dollars for power they won’t receive.

Ultimately, the cities may be compensated for delays. A renegotiated contract with Bechtel in July 2010 that capped the project cost at $4.93 billion also requires payment of damages for each day that each of the generating units is late. But the timing and amount of any damages are uncertain.

“We’re expecting that those things will be resolved and argued out when we have the entire project done,” said Duncan Kincheloe, chief executive of the Missouri Joint Municipal Electric Utility Commission. “We’ll probably have one view of that story, and Bechtel will probably have a little different view.”

In addition, the alliance also took out delay-in-startup insurance to protect member cities. He said discussions with the insurance carrier are ongoing.

Prairie State was seen as a model for coal-fired generation when Peabody Energy Corp. officials announced plans in the fall of 2001 in Nashville, Ill.

It also seemed an antidote to myriad pressures facing municipal utilities. The economy was humming. Electricity demand was rising, and so were energy prices.

Unlike wind power, Prairie State represented baseload energy, available around the clock. Coal at the time was much cheaper than natural gas. And the plant would be cleaner than the rest of the Midwest coal fleet.

Best of all, Prairie State would have a built-in fuel supply — a new coal mine across the road enabling fuel to be sent directly to the plant’s boilers via conveyors. That aspect of the project was especially appealing to utilities as a way to reduce coal transportation costs.

Today, St. Louis-based Peabody retains just a 5 percent interest in Prairie State. But officials still believe all of the selling points of the project then still apply despite the shift in energy markets.

“Investors in Prairie State look through the near-term blips to the longer-term cycles, and they see benefits to that,” said Vic Svec, a Peabody senior vice president.

But while some saw opportunity in Prairie State, environmental groups that sought to kill the project were warning anyone who would listen that cost projections provided to cities by the plant’s developers were too good to be true.

They pointed to dozens of similar projects across the country that were canceled as Prairie State progressed. The scuttled projects included a sister plant, almost identical to Prairie State, that Peabody proposed in western Kentucky.

“A plant like Prairie State is really the poster child for why we’re done with coal,” said Bruce Nilles, director of Sierra Club’s Beyond Coal campaign. “Because the economics are lousy.”

Two potential partners, in fact, pulled out of Prairie State.

Michigan utility CMS Energy, which had taken a 15 percent stake in the project and was to be the lead developer and operator, did so because it couldn’t get wholesale customers to agree to long-term power contracts, and therefore saw the project as too risky.

Wisconsin Public Power Inc., which buys power for 40 municipalities in the state, also backed away, citing cost uncertainty. Plant developers even sued the power agency for seeking to convert a possible ownership interest to a 25-year, fixed-price contract.

Prairie State officials said the $45 per megawatt-hour would result in a “windfall” for the power agency and “financial burden” for the project, according to the lawsuit. Meanwhile, around the same time, cities such as Hannibal, Kirkwood and Columbia were being pitched even cheaper energy from the plant.

Even after Prairie State is fully complete, Hannibal won’t use the electricity it gets from its share of the plant — at $54 per megawatt-hour — to power local homes. Instead, it will sell its share of the output, and it will lose money doing so unless power prices rise substantially. Currently, market prices for electricity are in the upper-$30 range.

Meanwhile, the city will continue to buy all of its energy from Ameren through 2016, at prices of $41 and $43 under two separate contracts. In locking in the Ameren rates, Hannibal officials are again betting market prices will rise, allowing the city to offset more of the losses from its Prairie State deal.

“Most veterans of the utility industry have pretty strong certainty that neither one of those conditions is going to last,” he said.

Stevenson, the Hannibal public works director, likewise said he’s taking a long-term view when it comes to the city’s deal with Prairie State.

“You have to,” he said, “because the short-term view sucks.”

The 70-year-old plants at Meredosia and Hutsonville, Ill., have run sporadically over the past few years.