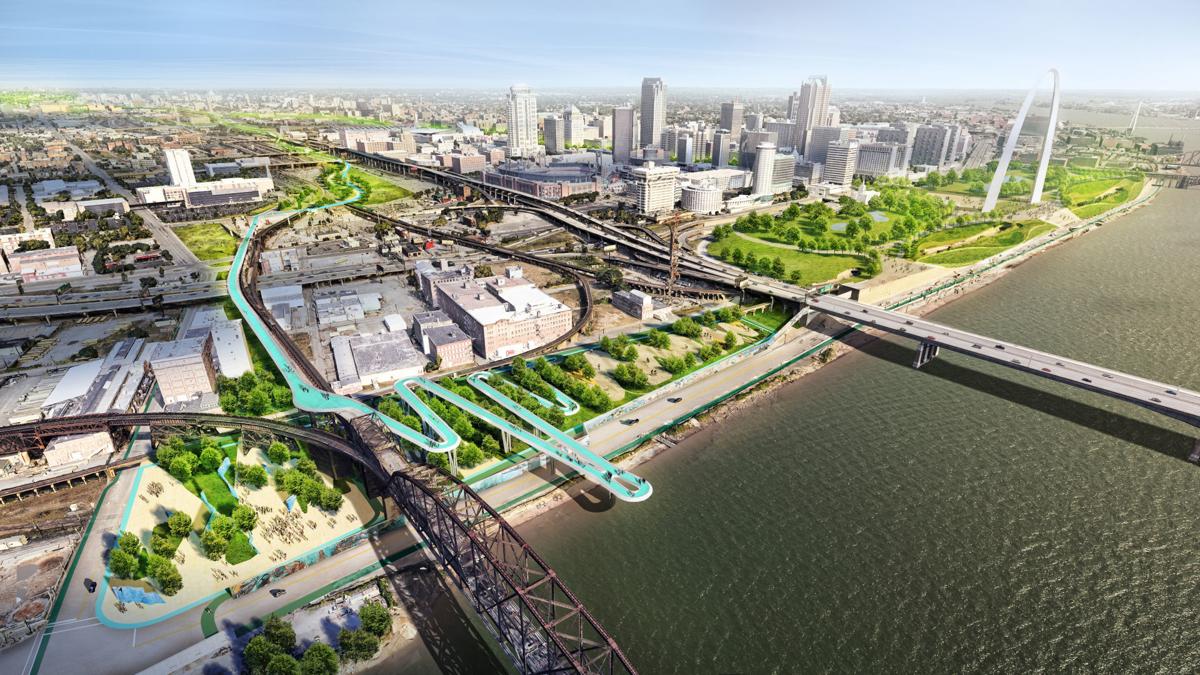 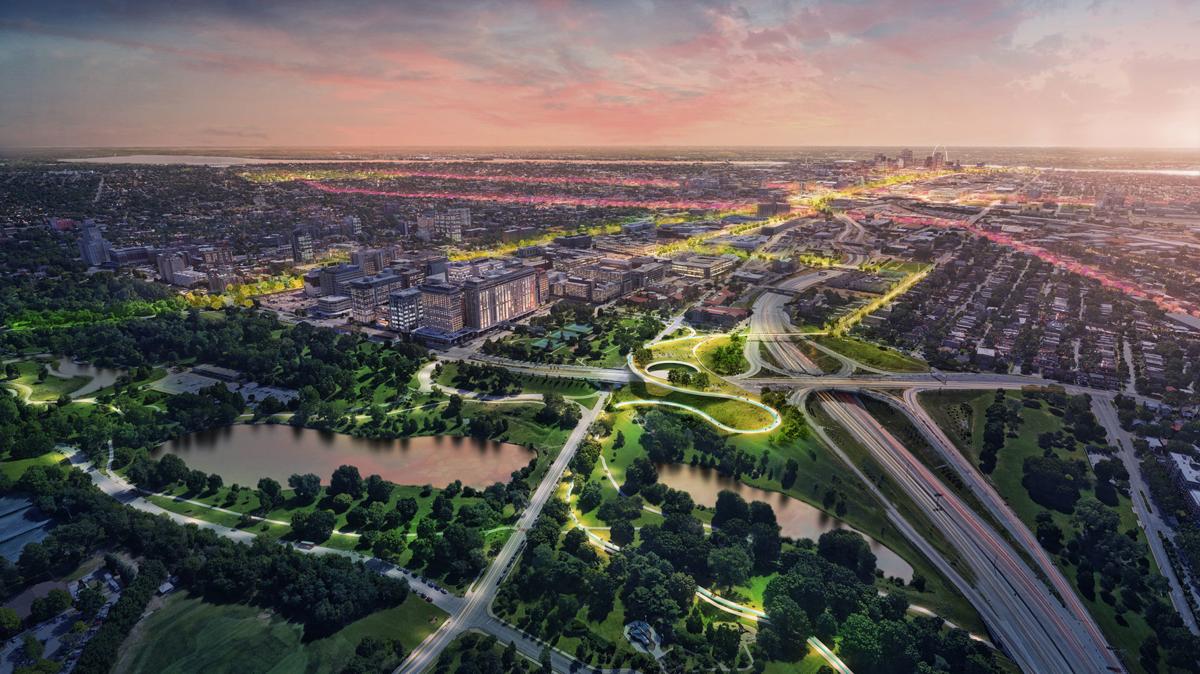 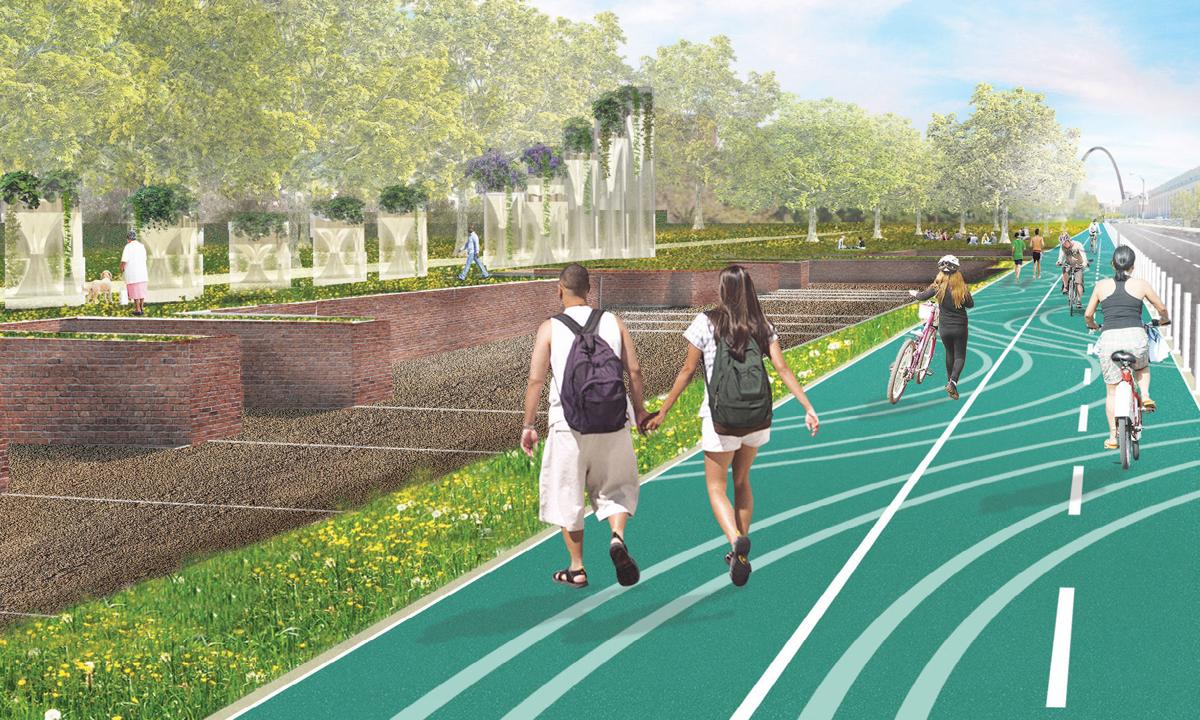 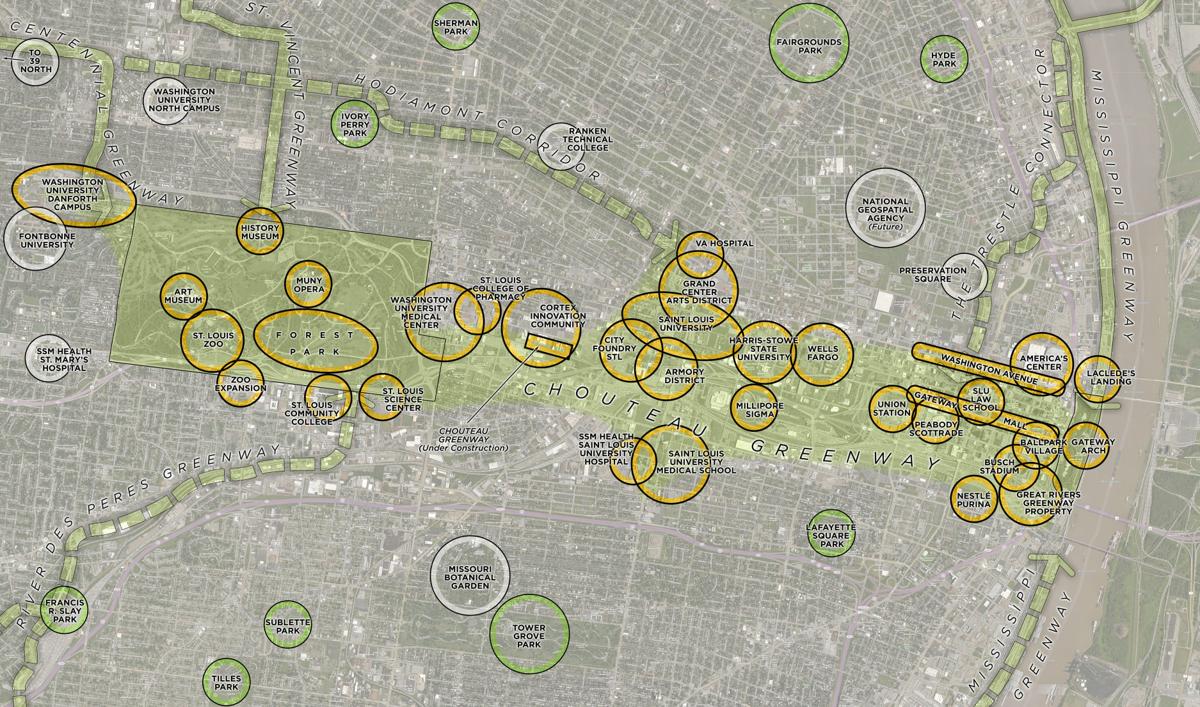 This map depicts some of the destinations along the route of the future Chouteau Greenway. (credit Great Rivers Greenway)

The momentous task of connecting Forest Park and the Gateway Arch — and potentially transforming a main swath of St. Louis — now rests in the hands of Stoss Landscape Urbanism, a firm unanimously chosen Wednesday to spearhead the design of a proposed pedestrian and cycling path called the Chouteau Greenway.

“This is an opportunity to take a series of really strong, what’s been described to us as islands in the city, and connect them,” said Chris Reed, founder and design director at Stoss, which has Boston and Los Angeles offices.

The group’s selection was announced by Great Rivers Greenway, the region’s public builder and manager of trail networks, after a nine-member “jury” of experts weighed competing visions for the project from four international design teams. Plans submitted by those teams were displayed for public review in early April, and additional details were provided in presentations at Harris-Stowe State University last week.

Though a significant step, Wednesday’s selection merely solidifies the team that will now seek to advance the project that would span the city. The design for the Chouteau Greenway is not settled, nor are funding mechanisms for the thoroughfare, which will rely on both public and private revenue sources.

The east-west corridor will include spurs heading north and south that “knit together” neighborhoods, parks and other focal points of interest. Great Rivers Greenway said the Stoss-led team would now “refine their conceptual plans,” with a June target in place for the project’s design to be finalized.

A commitment to flexibility during that refining process may have helped Stoss earn the nod.

“What set Stoss apart was their approach and an open understanding that even though they had some great ideas, that the community might want something different,” said Susan Trautman, Great Rivers Greenway’s chief executive officer.

Both the firm and organizers behind the design competition emphasized that the project faced more than just the logistical challenges of building the pathway itself. They said intertwined questions of equity, social justice and inclusiveness were as much a part of the equation as the project’s physical design.

“There’s kind of those three driving elements,” said Don Stastny, an architect based in Portland, Ore., who managed the design competition. “Trying to balance the connectivity of the greenway against economic and equity issues.”

“This project is unique in that it brings all those things together,” Reed said.

Trautman echoed that the Chouteau Greenway’s goal was to provide “everybody in the community” with opportunities for economic benefits.

“(Stoss) really understood the importance of economic development around the project,” she said, noting that its team includes a partnership with HR&A, a consulting firm that has researched the economic impacts of connectivity projects in other cities.

Starting this month, representatives from Stoss will come to St. Louis to meet with other project partners and to review input gathered from the community and from the design competition’s jurors, Trautman said.

After the project’s refined blueprint takes shape, Trautman said, the next — and perhaps most important — phase would begin in late June or July: cost estimation and an initial look at funding. Until then, she says, there are too many unknowns to say what the project’s price tag may be and how that cost would be spread across the public and private sectors.

She said Great Rivers Greenway expected to “leverage” some of its public funding to attract outside grants from foundations or federal agencies, and noted that the $600,000 cost of the design competition was covered entirely by private sources.

Reed said Stoss was prepared to tinker with its current design to develop something that was “still ambitious but ultimately achievable.”

The greenway’s ambition is already sparking excitement. Stastny has managed national design competitions for 35 years and said the project was “completely unique” compared with things he had seen elsewhere.

“I’ve been asked so many times over the course of this design competition, ‘Where else is this being done?’ and the answer is nowhere. This is an amazingly complex and interesting project that could basically transform the city,” Stastny said.

“It could very possibly be the highlight of my career if we’re able to pull off the transformation in the way that it is beginning to appear,” he added.

I ❤️ My Arch Photo Contest

Thanks for voting!  Look for winning photos featured in a special St. Louis Post-Dispatch section on Sunday, July 1.

This map depicts some of the destinations along the route of the future Chouteau Greenway. (credit Great Rivers Greenway)