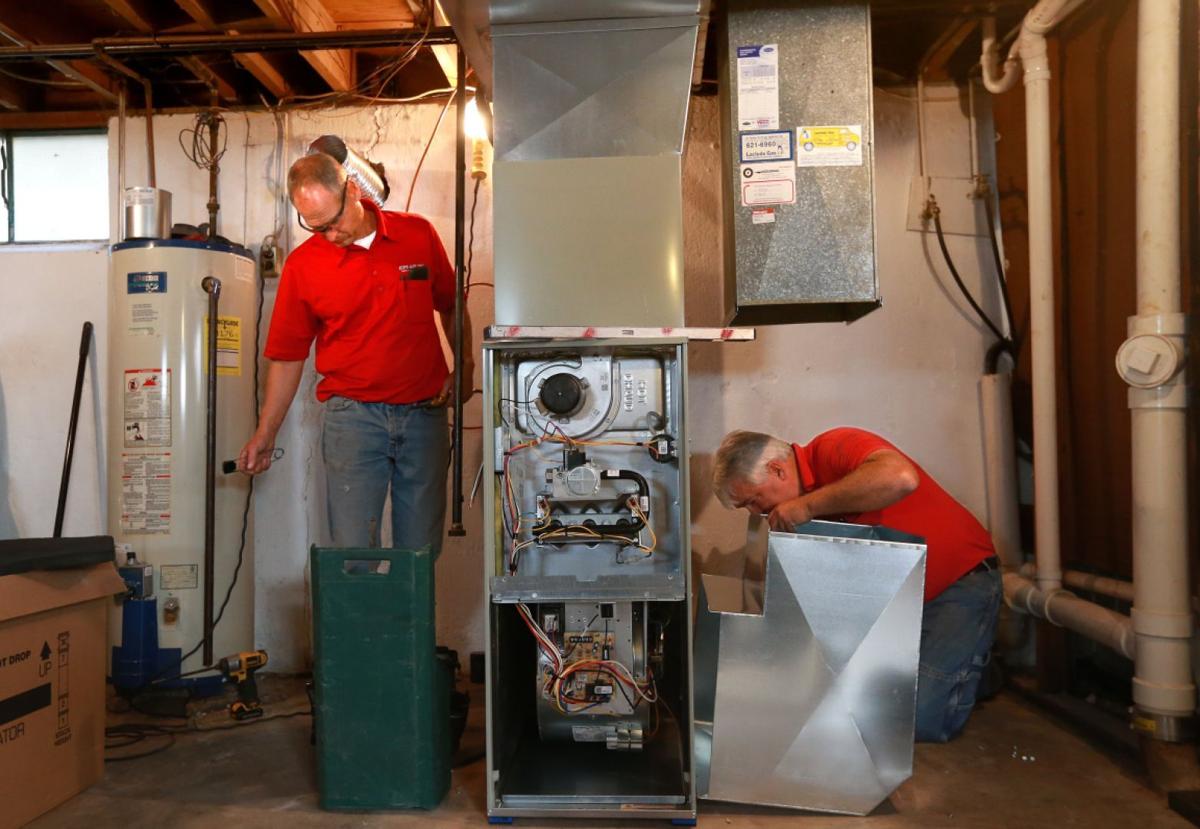 Mark Wahle, (left) and Jack Lyons, with Zipf-Air, Inc., install an entirely new new HVAC system in a Dogtown home on Monday Oct. 20, 2014, as a total replacement. The high-efficiency system is necessary to meet certain standards for homeowner Rebecca Tran to get a rebate from Ameren. Photo by Christian Gooden, cgooden@post-dispatch.com 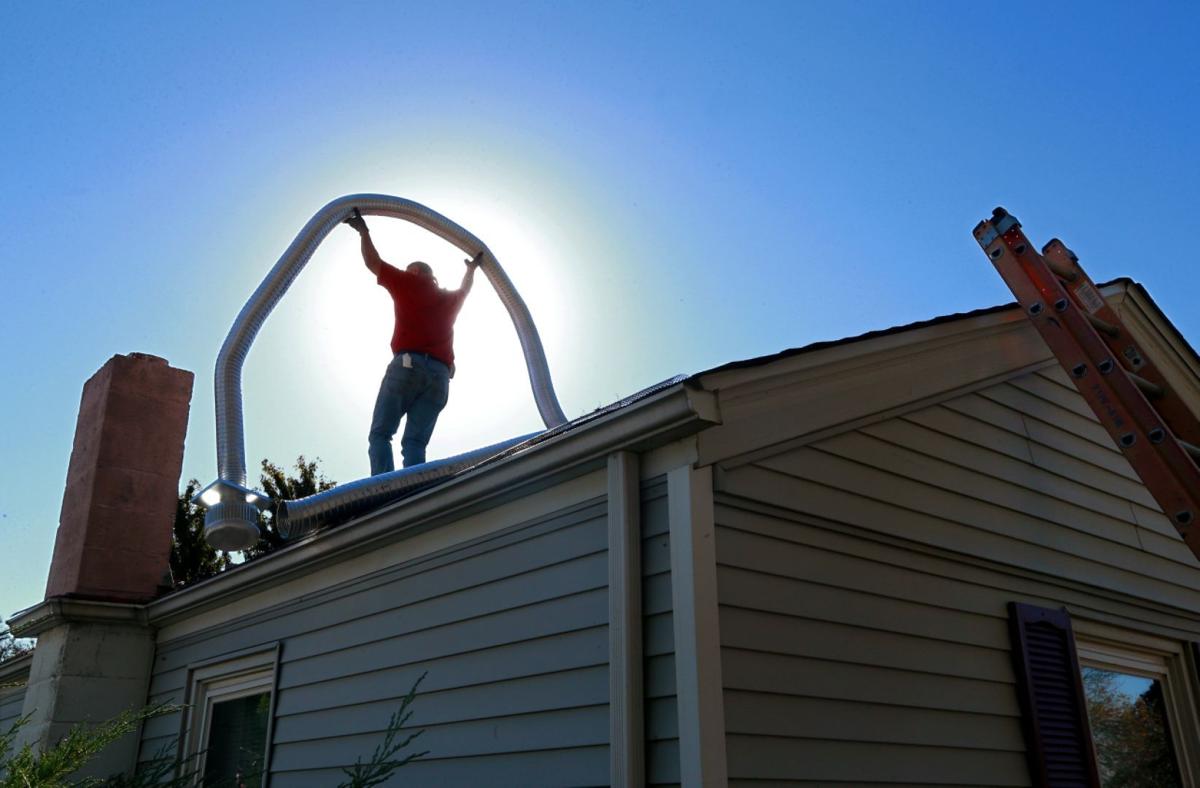 Mark Wahle, a technician with Zipf-Air, Inc., prepares to drop a new vent liner down the chimney of a Dogtown home on Monday Oct. 20, 2014, for a total furnace and air conditioning replacement. The narrower vent is necessary on the new unit that meets efficiency standard for homeowner Rebecca Tran to get a rebate from Ameren. Photo by Christian Gooden, cgooden@post-dispatch.com 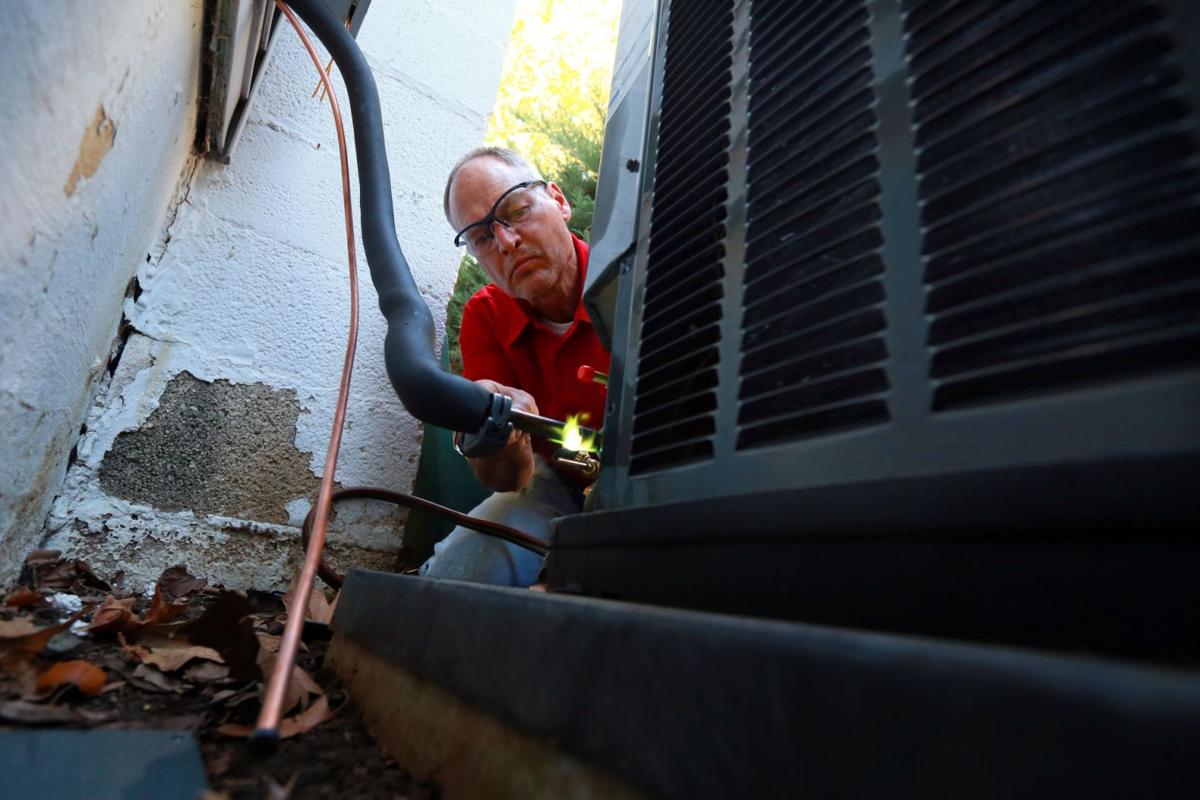 Mark Wahle, with Zipf-Air, Inc., solders the connections to a new air conditioning unit outside a Dogtown home on Monday Oct. 20, 2014, for a total furnace and air conditioning replacement. A total new heating and air replacement with a high-efficiency system qualifies homeowner Rebecca Tran for a rebate from Ameren. Photo by Christian Gooden, cgooden@post-dispatch.com

Missouri has long been a laggard when it comes to energy efficiency.

It hasn’t mattered much in a region powered by cheap coal. But as regulators appear poised to clamp down on carbon dioxide emissions, it could become a liability.

Yet Ameren Missouri, almost two years into a new regime of rules that promote efficiency, is hesitant to expand a program it believes will yield diminishing returns on energy savings after next year.

Its caution comes after the first year of data indicate many of Ameren Missouri’s customers are eager to take advantage of rebates for more efficient lighting and appliances.

Ameren far exceeded its 2013 savings goal, helping customers save between 310 and 397 gigawatt hours of electricity, depending on how results are counted (see attached story). The utility set a goal of 240 gigawatt hours for 2013, and it is shooting to save a total of 793 gigawatt hours through 2015.

Despite the success, some utility policy advocates say Ameren and the state can go much further to promote energy efficiency. Not only is it the cheapest and fastest way to meet proposed federal rules limiting emissions linked to climate change, they argue it is good for customers because it is less expensive than building new power plants.

“I want to compliment them on what they’ve done, and it’s good that they’re doing it. But there’s still so much more that can be done,” said Ashok Gupta, an energy economist at the Natural Resources Defense Council. “Ameren has just started. Any building in St. Louis, I would argue, is wasting at least 30 percent of its electricity.”

Ameren, however, doesn’t plan to expand its efficiency program when the current program expires next year. In its long-term resource plan, filed earlier this month, the utility said it planned to invest just over $147 million in energy efficiency from 2016 through 2018, the same it budgeted for the current three-year cycle.

With the same investment, Ameren projects just 54 percent of the savings impact, a total of 426 gigawatt hours from 2016 through 2018.

“We think utility energy efficiency programs are great,” Richard Voytas, Ameren’s energy efficiency manager, said at a state conference last week. “We think the business model that we have in the state of Missouri, the regulatory framework, is right on. And we’ve got a team dedicated to getting everything that we can. But we also know that past performance when it comes to energy efficiency is not indicative of future performance.”

Missouri has made big strides in recent years, writing regulations that allow utilities to earn a return on energy efficiency investments that offset lost sales.

Still, in its annual scorecard released last week, the American Council for an Energy-Efficient Economy cut the state’s ranking to 44th from 43rd. East of the Mississippi River, Illinois is ranked No. 11 for policies that encourage energy conservation.

The state took a big step in 2009, when the Missouri Energy Efficiency Investment Act, or MEEIA, took effect. It allowed utilities to get paid to promote efficiency, alleviating their natural disincentive to promote a program that reduces electricity sales. After writing rules, the Missouri Public Service Commission adopted Ameren Missouri’s program in 2012.

Beginning in 2013, monthly charges on customer bills, usually between $3 and $4 for a residence, pay for marketing rebates and other program costs. They also reimburse the utility for lost electricity sales due to more efficient appliances.

Profit is allowed, too. Depending on how well it performs, Ameren could be eligible for upwards of $30 million in net payments at the end of the first cycle in 2015, according to an estimate from the Office of Public Counsel.

“Missouri does have the right mechanisms in place to be able to make some good decisions,” Migden-Ostrander said in an interview.

Ameren, however, is hesitant to put more money into a new program that spokesman Warren Wood said was already investing in “all cost effective and reasonable” efficiency gains.

While it agrees efficiency is more cost-effective than new power plants, Ameren says it becomes more expensive to chase after harder-to-get energy savings.

Ameren, however, told the PSC it believed those numbers were “unattainable,” and it estimated it could realistically offset only 5.5 percent of its sales through energy savings programs. There is “boundless risk and uncertainty” associated with sustaining that level of savings called for by EPA, Ameren wrote.

Ameren’s environmental compliance manager, Mike Menne, warned this summer that if the EPA didn’t push back its timeline for carbon dioxide reductions, the utility would have to add 1,200 megawatts of natural gas power plants to comply with the rule. He played down the role of ramped-up efficiency programs.

“You get a lot of good energy efficiency upfront, but those programs become more and more expensive as time goes on,” Menne said then.

“The cheapest megawatt hour is the one never generated,” the environmental group wrote in comments to the PSC. “It appears KCP&L and GMO have taken this to heart, and the only thing holding back Ameren and Empire is leadership.”

Much of Ameren’s first-year gains came from a lighting program that subsidized more efficient compact fluorescent bulbs on retailer shelves. As older incandescent bulbs are phased out and more efficient lighting becomes the norm, Ameren will lose the opportunity to claim credit for those savings.

“Future lighting programs are going to become more of a challenge because you no longer have incandescent bulbs out on the shelves anymore,” Wood said.

Still, there’s far more savings potential yet to be tapped, the NRDC’s Gupta said. “Even in states like California where they’ve been doing energy efficiency so long, there’s a huge amount of potential left.”

Regulators must make sure that a megawatt of energy saved earns just as much for the utility as a megawatt of generation, Gupta said.

Just across the river, Ameren Missouri’s sister utility, Ameren Illinois, has been at the efficiency game for several years already.

“Illinois is in their seventh year and there’s still a lot of it there,” said Doug Sitton, president of Sitton Energy Solutions, which provides energy audits and commissioning for commercial buildings. “In Missouri, it’s still early.”

Ameren Missouri spent roughly 1 percent of its revenue on energy efficiency last year. That compares with 0.65 percent of statewide utility revenue spent on efficiency, ranked 35th in the country by the ACEEE.

Unlike some of the leading coastal states, where utilities will spend 3 percent or more of their budgets on efficiency, energy in Missouri is cheap, Ameren points out.

With low electricity bills relative to those areas, customers here aren’t as eager to offset monthly utility bills and it takes longer for customers to earn back their investment. Federal mandates on efficiency in new appliances will drive further savings that Ameren can’t claim credit for.

It is a good program and many people take advantage of rebates for efficient air conditioners, said John Zipf, owner of Zipf-Air Inc. in Kirkwood. But he agreed that saving energy wasn’t too important to some customers.

“Some people just say no, their bills are so low it doesn’t make a difference,” he said. “The problem is energy is so cheap in St. Louis.”

If customers don’t keep using rebates to adopt efficiency upgrades, the energy savings that form the basis of the utility’s potential profit under the program diminish.

“This is something they’re still learning to figure out, and they still have huge doubts they can do this,” Gupta said. “And that’s part of the cultural shift issue. And that cultural shift is both on the utility side and the regulatory side.”

Ameren, however, notes progress. Because of its efficiency program, Ameren said, it won’t need to replace its 800-megawatt Meramec coal plant when it is retired around 2022.

Ameren plans to close its 975-megawatt Sioux coal plant around 2033 and build 600-megawatts of natural gas power to offset it. In the meantime, it will build some renewable energy, potentially several hundred megawatts of wind generation.

That will help Ameren move toward compliance with EPA’s carbon rules, but Migden-Ostrander said state regulators needed to demand Ameren demonstrate it is using the least-cost option to comply.

“They may not be able to do all energy efficiency, but they can sure as heck do a lot.”

The agreement is the first for Ameren's energy efficiency program.

Families in affordable, multifamily properties would see greatest benefit from lower electric bills but struggle to participate in existing programs.

Kansas City, Chicago ahead of city in promoting energy savings.

Ameren has unlikely ally in fight over future of efficiency program

Ameren spars with critics over future of efficiency program

Energy efficiency rebates could be at risk in St. Louis area

Illinois boosts rank to No. 10.

Utility won't say whether it will try to redesign its energy savings program after Missouri regulators rejected its proposal.

It is the first time regulators are evaluating energy savings from a utility program under the state's efficiency law.

Missouri inches closer to the bottom; Illinois falls out of top 10.

Mark Wahle, (left) and Jack Lyons, with Zipf-Air, Inc., install an entirely new new HVAC system in a Dogtown home on Monday Oct. 20, 2014, as a total replacement. The high-efficiency system is necessary to meet certain standards for homeowner Rebecca Tran to get a rebate from Ameren. Photo by Christian Gooden, cgooden@post-dispatch.com

Mark Wahle, a technician with Zipf-Air, Inc., prepares to drop a new vent liner down the chimney of a Dogtown home on Monday Oct. 20, 2014, for a total furnace and air conditioning replacement. The narrower vent is necessary on the new unit that meets efficiency standard for homeowner Rebecca Tran to get a rebate from Ameren. Photo by Christian Gooden, cgooden@post-dispatch.com

Mark Wahle, with Zipf-Air, Inc., solders the connections to a new air conditioning unit outside a Dogtown home on Monday Oct. 20, 2014, for a total furnace and air conditioning replacement. A total new heating and air replacement with a high-efficiency system qualifies homeowner Rebecca Tran for a rebate from Ameren. Photo by Christian Gooden, cgooden@post-dispatch.com