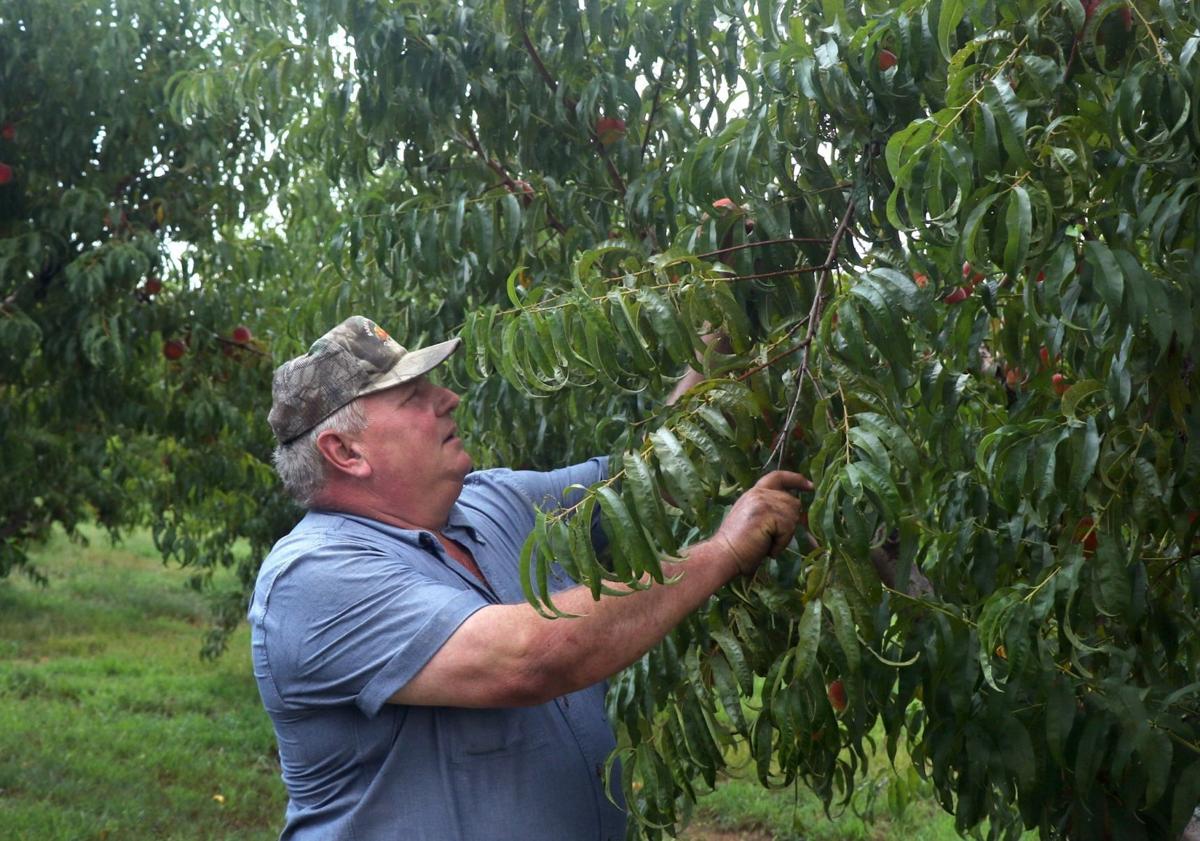 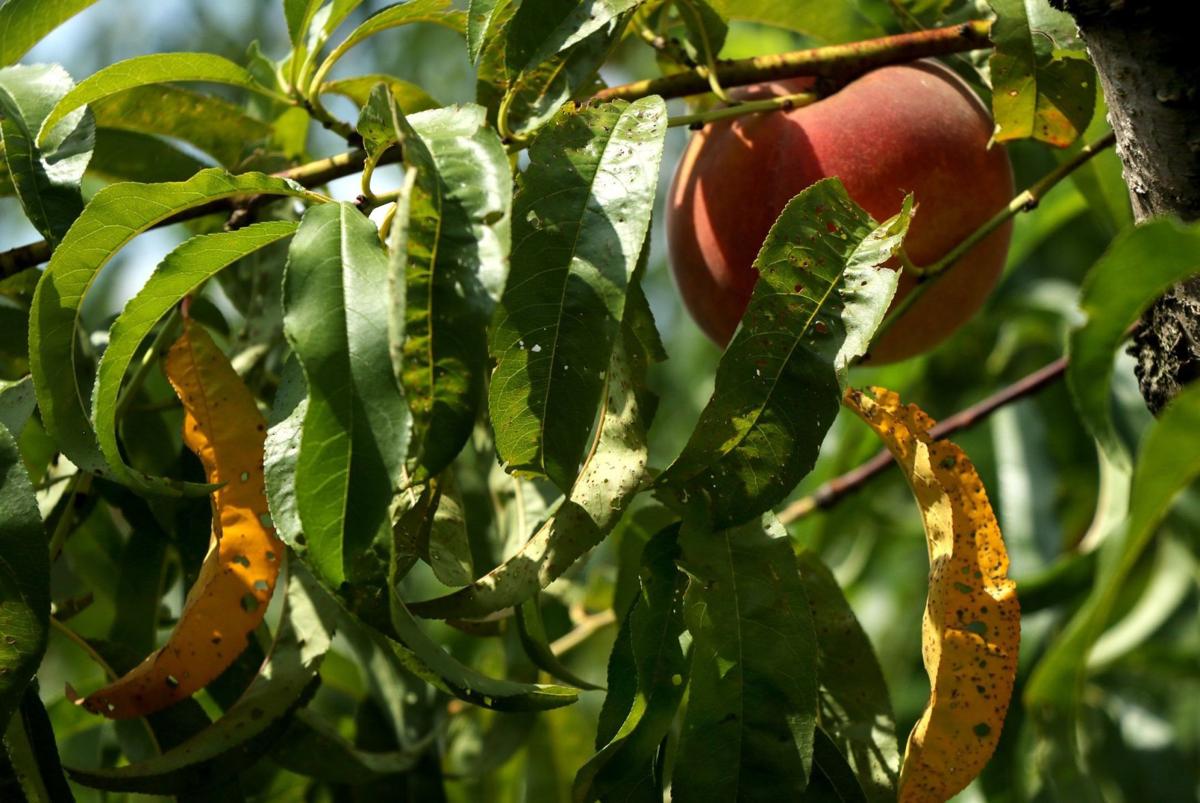 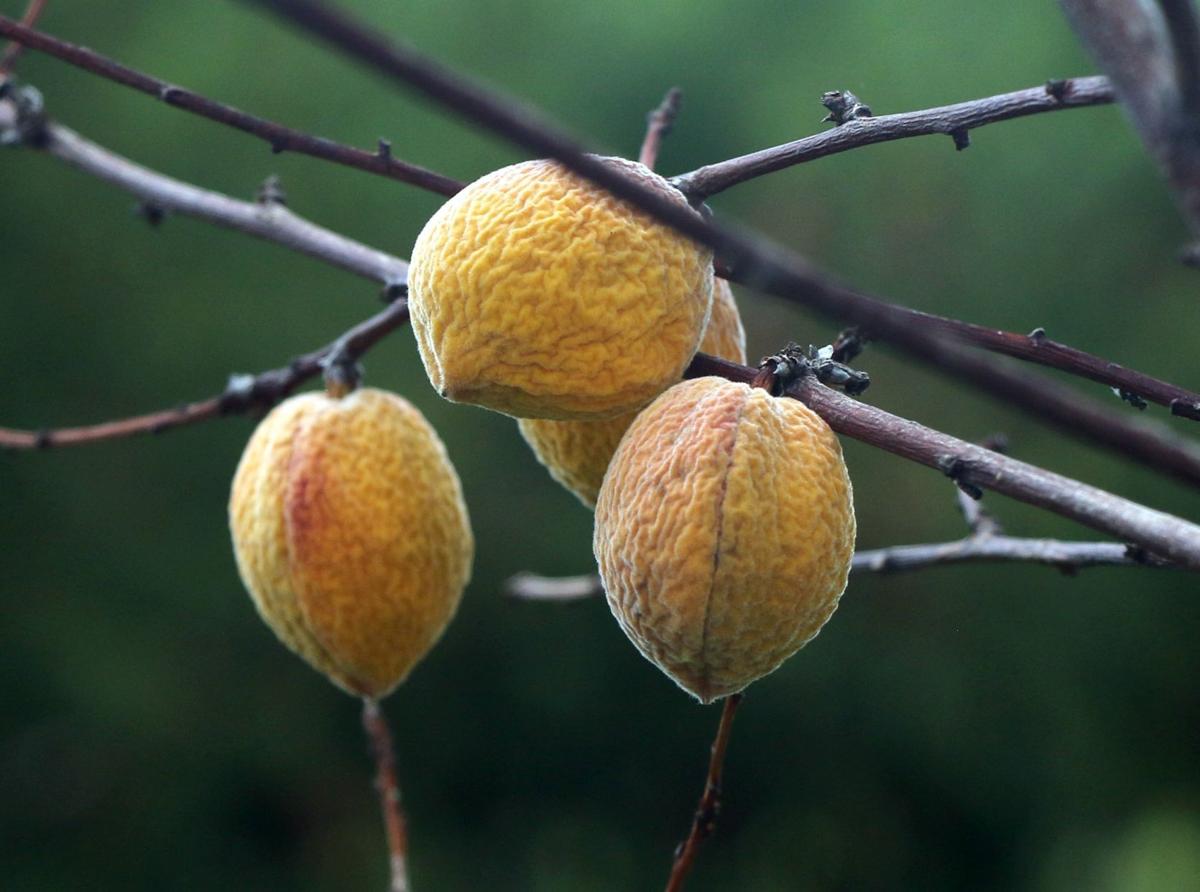 Peaches too small to pick are left to wither in the orchards of Bader Farms, near Campbell, Mo. This year Bill Bader says between 8,000 and 10,000 of his trees produced peaches "about the size of a quarter" that weren't worth harvesting. Photo by Bryce Gray, bgray@post-dispatch.com

CAPE GIRARDEAU, Mo. — In February 2015, with the U.S. Environmental Protection Agency considering whether to approve a new Monsanto weedkiller anticipated to be sprayed on tens of millions of acres of crops, many researchers wanted to see how the herbicide would work in the field.

University researchers had been requesting the tests in order to ease farmers’ fears about crop damage, and Monsanto scientists wanted to conduct tests to help draft recommendations for farmers who would use the pesticide.

But knowing federal regulators were paying attention to the new weedkiller’s potential to contaminate other fields, the company decided to “pull back” on testing to allow dicamba to have a “clean slate,” according to an email from Dr. Tina Bhakta, who, in her role as global chemistry expansion lead for Monsanto, was responsible for obtaining EPA registration for the weedkiller.

The email was included in Bhakta’s video testimony Thursday in U.S. District Court in Cape Girardeau, Missouri, in a civil lawsuit filed by Bader Farms, the largest peach farm in the state, against German agribusiness giants BASF and Bayer, which bought St. Louis-based Monsanto in 2018.

Stakes are high, according to some following the case, with an outcome expected to influence the pipeline of additional dicamba litigation heading through court from around the country.

Monsanto genetically engineered soybean and cotton seeds to withstand being sprayed by dicamba, a very effective but volatile weedkiller developed by chemical company BASF in the 1950s to combat the growing problem of weed resistance. Both companies also released accompanying herbicides designed to minimize contamination, known as “off-target movement,” that could harm sensitive crops, such as nontolerant soybeans, cotton and specialty crops.

Together, the new dicamba-tolerant crops and accompanying herbicide were to be the largest biotechnology launch in Monsanto history.

Bader Farms, which says it is no longer a sustainable business because of off-target movement of dicamba harming its orchards, alleges that the companies released their dicamba-tolerant systems intentionally to create drift issues in order to increase their profits. The lawsuit is one of many filed by farmers against the companies over the issue.

The companies deny the allegations, blaming the off-target movement of dicamba on farmers applying dicamba off-label, and on weather events and other issues.

Anticipating the widespread use of the new dicamba formulations, Jason Norsworthy, a weed science professor at the University of Arkansas, asked Monsanto for a little bit of its herbicide formulation — Xtendimax with VaporGrip — to test its volatility. But the company told Norsworthy it would have difficulty producing enough dicamba for both him and its independent tests, according to an email produced in court on Thursday.

Joe Sandbrink, a 35-year Monsanto employee, didn’t think much of that explanation when he forwarded the email to a fellow member of the technology development team.

Bhakta testified on Thursday that she did not know of any shortage of dicamba.

Much of the case, which was filed in November 2016, revolves around Monsanto’s decision to release dicamba-tolerant seeds without an accompanying herbicide in 2015 and 2016. In those years, many farmers allegedly illegally sprayed older versions of dicamba, harming farms including Bader Farms.

The EPA approved the new, allegedly less volatile herbicides — Monsanto’s Xtendimax and BASF’s Engenia — for use in the 2017 growing season. Still, complaints about off-target movement of dicamba continued. In 2017, more than 3.6 million acres of nonresistant soybeans were damaged, according to an estimate from University of Missouri professor Kevin Bradley. Complaints have continued in subsequent years.

“We anticipated it might happen,” Dr. Boyd Carey, regional agronomy lead at Bayer Crop Science, which bought Monsanto in 2018, testified on Wednesday. Carey oversaw the claims process for Monsanto’s launch of the new herbicide. Monsanto received more than 3,000 complaints in 2017.

Carey and Bhakta both testified Thursday that the company maintains there are no issues with volatility of Xtendimax, as long as the label’s instructions are followed.

Norsworthy was far from the only person asking to test dicamba, according to testimony from Bhakta.

Bhakta testified that she did not remember a meeting where she traveled to Norsworthy’s office in Fayetteville, Arkansas, to discuss the issue. She also testified that she did not remember the details of a meeting with Dr. Stanley Culpepper, a professor at the University of Georgia, in Athens, Georgia, to discuss his request for dicamba for volatility testing. Nor did Bhakta remember an email where she agreed with other Monsanto officials that it would be good to invite Culpepper to come to Monsanto’s own volatility testing in southern Georgia to “throw him something.”

“It was 2015. I meet with many people. I don’t recall this one,” Bhakta said. But emails show Bhakta was there, as well as included on many other emails discussing the requests from Culpepper and Norsworthy.

The two volatility studies that Monsanto submitted to the EPA were a 9.6-acre test over cotton in Texas on June 8, 2015, and a 3.4-acre test over bare ground in Georgia on May 5, 2015, she testified. No tests were conducted over soybeans.

In fact, the company vetoed its own employees — interested in testing to help develop recommendations for farmers who would eventually use the product — from testing the Xtendimax with VaporGrip dicamba herbicide in its own seed trials.

“I think I would veto this one, as we are limiting all use of VaporGrip this year,” wrote Bhakta in response to a December 2014 request from Monsanto researchers requesting the testing.

Bhakta was also a member of a team that was told to reach out to BASF to ask the company to limit testing, she testified. Bhakta said the company was concerned about tests being conducted outside of “good laboratory practice” though the studies that Monsanto had submitted were conducted under those practices.

At the time, Bhakta and her boss, Susan Martino-Catt, the director of Global Regulatory Sciences at Monsanto, were under a great deal of pressure from the executive team, according to emails. The company was planning on a 2016 launch of the herbicide, but it was not approved until Nov. 2016.

In a February 2015 email, Martino-Catt wrote they had gotten a “clear message” from the executive team “that we must do everything we can to get the registration.”

“Sometimes,” Martino-Catt wrote, “this means not having all the paperwork in place.”

Bhakta replied with a smiley face.

Peaches too small to pick are left to wither in the orchards of Bader Farms, near Campbell, Mo. This year Bill Bader says between 8,000 and 10,000 of his trees produced peaches "about the size of a quarter" that weren't worth harvesting. Photo by Bryce Gray, bgray@post-dispatch.com