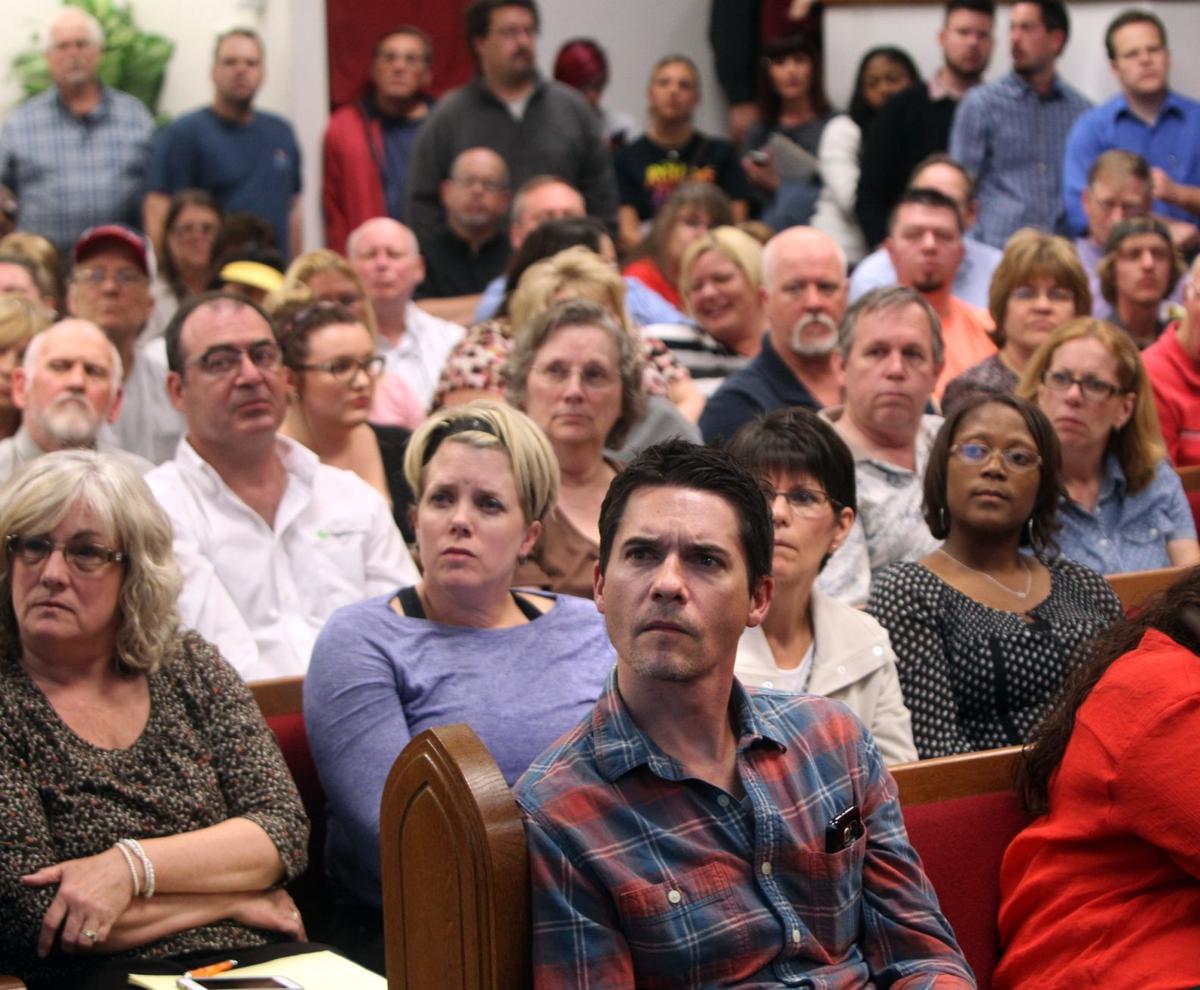 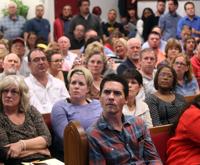 Hundreds of people watch a slide presentation on Thursday, Oct. 15, 2015 of the Attorney General's assessment of the landfill and nuclear waste situation at the Bridgeton Republic Services dump at a meeting by Just Moms at John Calvin Presbyterian Church. Most in attendance were not aware of the environmental consequences if a major event occurred. Photo by Christian Gooden, cgooden@post-dispatch.com 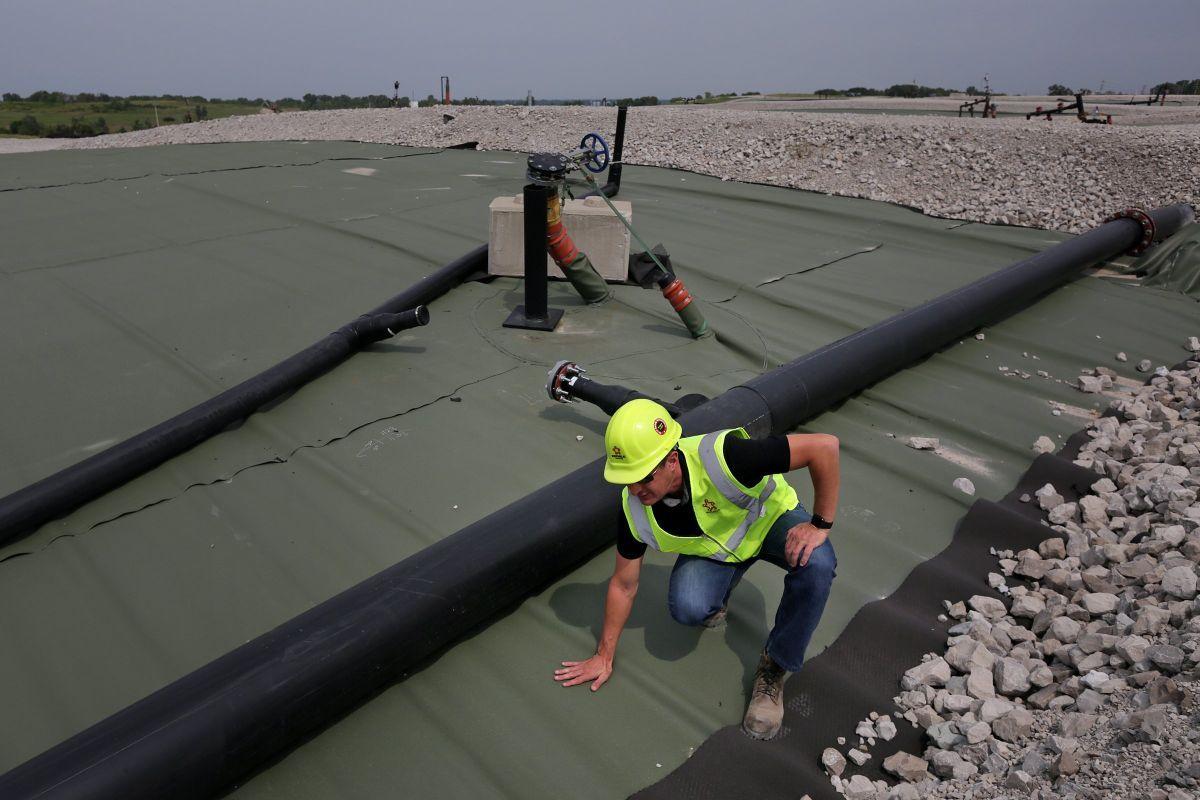 Brian Power, an environmental manager with Republic Services, shows an area in the south quarry portion of the Bridgeton Landfill, near where he says the reaction is most intense, on Friday, Aug. 28, 2015 in Bridgeton. Photo by Huy Mach, hmach@post-dispatch.com

BRIDGETON • As fear grows over a landfill fire smoldering next to a World War II-era radioactive waste site, the Environmental Protection Agency is disputing reports that warn of an elevated threat.

The EPA said it “strongly disagrees” with reports from Missouri Attorney General Chris Koster that assert the underground fire in Bridgeton Landfill is not under control. The agency also disagrees with a report indicating radioactive material from the adjacent West Lake Landfill has been found in vegetation beyond its perimeter fence.

The EPA spoke with the Post-Dispatch Friday after the agency released a report conducted by a division of the U.S. Department of Health and Human Services (HHS) that found the contaminated West Lake Landfill posed no exposure risks to the surrounding community.

“I really want to assure the communities and families in St. Louis that there is no imminent threat,” EPA spokesman Curtis Carey said.

EPA’s reassurances come as communities near the burning Bridgeton Landfill worry that the situation is out of control. Local school officials have sent letters home detailing emergency plans; St. Louis County government last week released a plan for responding to the fire’s spread. Hundreds of people showed up to a meeting in Bridgeton Thursday night to learn more about the 5-year-old fire and decades-old waste.

Last month, Koster released reports from experts hired by his office indicating the fire was moving toward the radioactively contaminated West Lake Landfill. Koster’s experts also said some radioactive contamination was found in vegetation and groundwater outside of the federally regulated Superfund site.

Koster is suing Republic over the burning landfill and its effect on residents and the environment. He released the reports just days after representatives of landfill owner Republic Services toured the site with the Post-Dispatch in an effort to demonstrate the situation is under control.

On Friday, though, the EPA’s Carey took issue with the reports from Koster’s experts and said some of their descriptions of the landfill fire’s spreading radioactivity should it reach West Lake were “not helpful.”

“What we are seeing so far in these other reports is we absolutely disagree with them,” Carey said.

Koster’s office did not respond to requests for comment.

People who reside near the landfills, however, may not take much comfort in the agency’s latest study. Robbin Dailey, who lives in the Spanish Village subdivision next to the Bridgeton Landfill, said she had lost faith in the EPA after attending years of community meetings on the West Lake Landfill.

“Had I not been witness to some of this rhetoric from EPA for several years, I would take their word verbatim for being the gospel truth,” she said. “But now I know better.”

West Lake Landfill has been contaminated for more than 40 years after a company illegally dumped material from uranium processing. The EPA has spent more than 20 years studying West Lake, but community concern has grown after the underground fire in nearby Bridgeton Landfill was discovered.

Republic Services refers to the fire as an underground chemical reaction. It has reached temperatures in excess of 300 degrees, hotter than normal landfill decomposition temperatures, but without flames.

Still, it has sent putrid odors wafting over nearby neighborhoods in northwestern St. Louis County, drawing nuisance lawsuits as well as the one filed by Koster’s office. Republic Services has since spent millions of dollars installing a landfill cap and gas and cooling wells meant to control the underground fire.

Republic Services insists that it has gotten the fire under control and that it is no longer moving toward the waste. The Phoenix-based waste hauler hopes the fire will burn out in several years.

Republic Services countered Friday, releasing a deposition with one of the state’s landfill fire experts, Tony Sperling. Koster’s office had cited Sperling’s report for its contention that the fire had moved beyond infrastructure meant to contain it.

A deposition between Sperling and Republic’s attorneys quotes Sperling as saying the fire is confined to the southern portion of the Bridgeton Landfill. Sperling also says he doesn’t know if it is moving toward the radioactive waste.

“If there is movement, it’s relatively much slower than it has been in the past,” Sperling is quoted as saying.

The EPA, too, emphasized nothing indicated the fire was moving towards West Lake.

“There’s no evidence or data to support the conclusion that the (subsurface smoldering event) is rapidly moving toward the (radiologically impacted material) in West Lake,” Carey said.

Even if the fire did reach West Lake, Carey said, the reaction isn’t expected to spread radioactive material aerially. The EPA disagrees with language in the St. Louis County emergency plan warning of the “potential for radioactive fallout to be released in the smoke plume and spread throughout the region.”

“We don’t believe that’s even a worst-case scenario in this situation,” Carey said.

There could be an increase in radon gas if the fire ever reached West Lake, but even then Carey downplayed any risk to the surrounding community.

“Even if that were to occur, which we don’t believe there’s any indication that it is, there would be no off-site health risks to the community,” he said.

Much of the HHS report references potential risks to workers on the landfill from inhaling particulates or radon gas. And while it insists people won’t be exposed to the landfill’s waste, it doesn’t rule out the possibility of groundwater contamination.

Carey acknowledged that groundwater does pose a risk to spreading contamination from West Lake, and he said the EPA was continuing to work with the U.S. Geological Survey to monitor groundwater.

“The reassuring thing here and what the (report) said is that there is no pathway to drinking water,” Carey said.

Dailey, the Spanish Village resident, said she worries the EPA and other federal agencies aren’t looking at long-term, low-level exposure.

“When it happens day after day, month after month, for years, that is chronic,” Dailey said.

These are just some of the articles about the West Lake and Bridgeton landfills that the Post-Dispatch has published.

AG Koster says fire, radioactive waste at landfills in Bridgeton not under control

Hundreds of people watch a slide presentation on Thursday, Oct. 15, 2015 of the Attorney General's assessment of the landfill and nuclear waste situation at the Bridgeton Republic Services dump at a meeting by Just Moms at John Calvin Presbyterian Church. Most in attendance were not aware of the environmental consequences if a major event occurred. Photo by Christian Gooden, cgooden@post-dispatch.com

Brian Power, an environmental manager with Republic Services, shows an area in the south quarry portion of the Bridgeton Landfill, near where he says the reaction is most intense, on Friday, Aug. 28, 2015 in Bridgeton. Photo by Huy Mach, hmach@post-dispatch.com