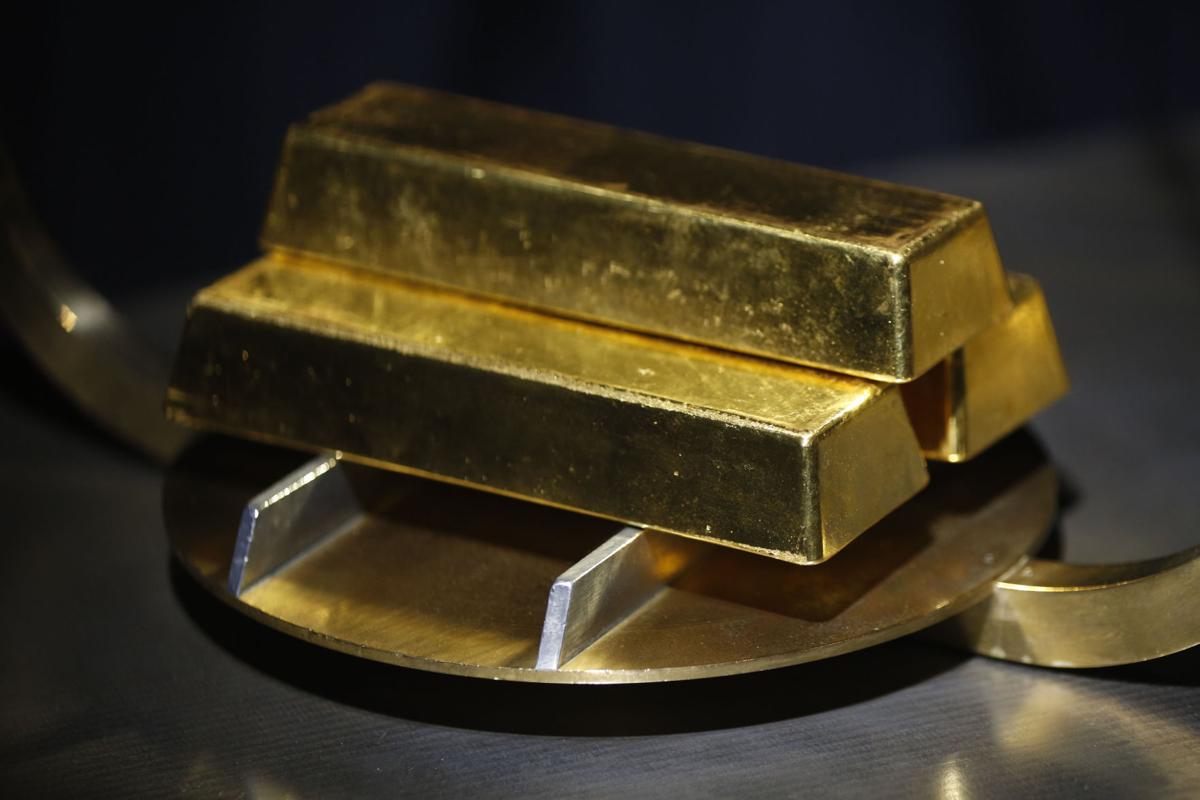 Gold bars inside the Denver Mint in Denver in October. The gold standard is one of the oldest ideas about money, but the hardest of hard-money hawks sense an opening to breathe new life into it.  Bloomberg photo by Luke Sharrett. 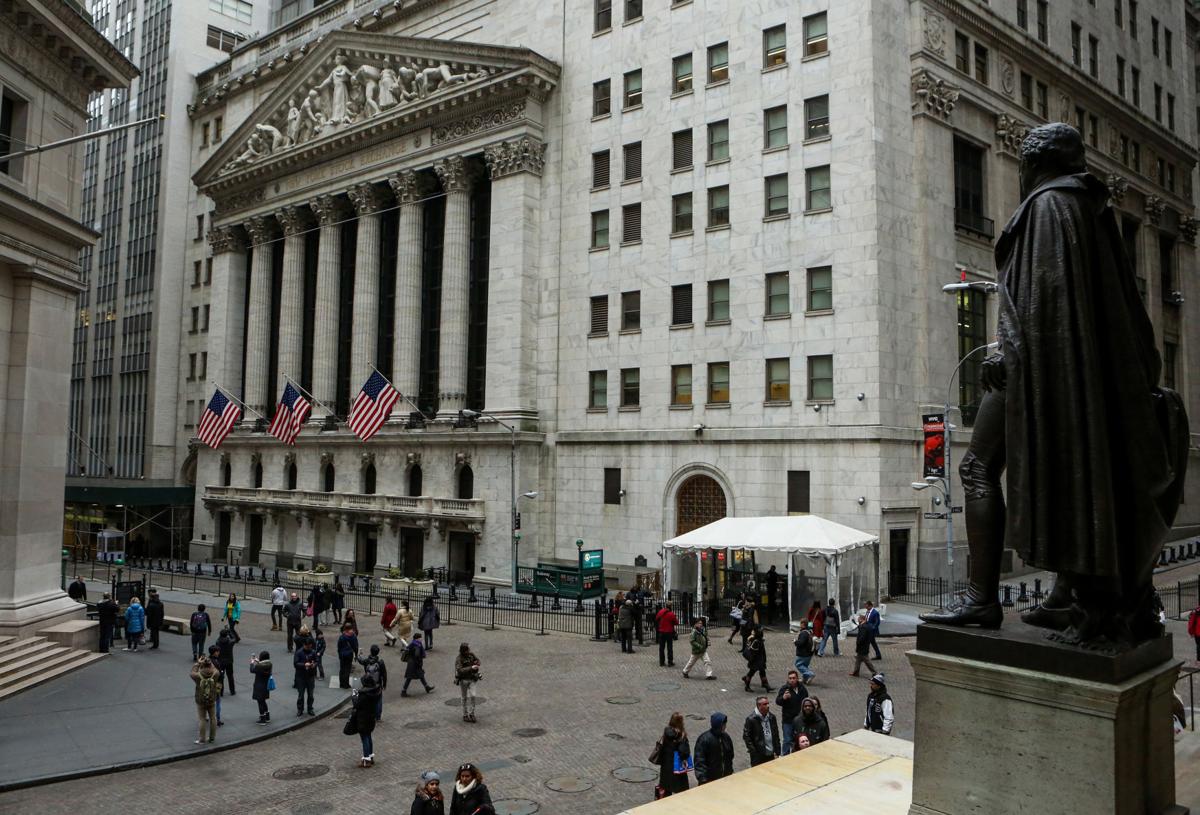 Pedestrians walk past the New York Stock Exchange in 2015. Rumbling discontent with the economy has left the financial establishment under siege, raising the appeal in some quarters of a return to the gold standard.  Bloomberg photo by Chris Goodney.

When times are tough, new economic theories get a better hearing. Maybe some old ones, too.

The gold standard is one of the oldest ideas about money, but the hardest of hard-money hawks sense an opening to breathe new life into it. Decades ago, the amount of cash circulating in a country was often limited by the stash of bullion held in its coffers. Especially since 2008, developed-world policy has headed in the exact opposite direction, expanding the powers of central banks to stoke growth. Helicopter drops of money, potentially the next new thing, would be a giant leap further.

For those in the United States who see much risk and little benefit in the current course, gold is still a rallying point. And their audience may be growing.

"The fringe has become the mainstream," said Jesse Hurwitz, a U.S. economist at Barclays Capital in New York. He sees the gold standard as a bad idea but "something we'll increasingly talk about."

Of course, full restoration of the system that reigned in the U.S. for a century through the 1970s is almost inconceivable. Even many gold bugs say it can't be done, and there's near-unanimity among economists that it shouldn't be attempted: the U.S. would be in much worse shape, they say, with a Federal Reserve stripped of its ability to freely tinker with the money supply.

But the backdrop to this well-rehearsed debate is changing. Rumbling discontent with the economy has left the establishment under siege, and you can't get more establishment than the Fed. So, in a curious twist, it's becoming easier for supporters of hard money — historically a policy favored by the rich — to give the idea a populist slant. The money conjured up by central bankers after the crisis, the argument goes, all went to bankers, leaving most Americans no better off. It's time to tie the Fed's hands, if not to gold, then at least to something.

"We don't need to be a slave to history," said George Selgin, director of the Center for Monetary and Financial Alternatives at the Cato Institute in Washington. The gold standard is "like Humpty Dumpty," he said, hard to put back together. But "we can think about having a monetary system that isn't completely arbitrary, where it isn't just a matter of discretion, people sitting in a room 13 times a year doing whatever."

For a while, to the hard-money folks, the U.S. election season must have appeared full of promise.

The Fed was getting bashed from all sides. "It is unacceptable that the Federal Reserve has been hijacked by the very bankers it is in charge of regulating," Democratic candidate Bernie Sanders said in a New York speech in January. Economists who support Sanders, like Nobel prizewinner Joe Stiglitz, see the Fed's quantitative easing as a form of trickle-down economics that's exacerbated inequality.

The proponents of gold or some other fixed monetary rule are more likely to be found in the Republican Party, and what they object to is the very idea of money creation by fiat, not just its distributional effect. Still, there's some overlap.

Ted Cruz, in one of the early candidate debates last year, said the Fed "should get out of the business of trying to juice our economy and simply be focused on sound money and monetary stability, ideally tied to gold."

Then there was Donald Trump. "We used to have a very, very solid country because it was based on a gold standard," he told WMUR television in New Hampshire in March last year. But he said it would be tough to bring it back because "we don't have the gold. Other places have the gold."

In more recent interviews, the presumptive nominee sounds like he's drifted toward a soft-money worldview. Last week, he drew attention to the U.S. government's ability to print money. To the gold bugs, that's a problem — but Trump painted it as a potential solution.

Below the presidential level, though, the gold camp and its allies have gained support.

"There's a growing constituency within the House Republican membership that a more rules-based approach or a gold standard would be advantageous," said Hurwitz of Barclays.

Not all Republicans welcome the development.

The gold standard "was awful. It was horrific," said Tony Fratto, a former Treasury and White House official in the George W. Bush administration. "It led to some of the worst economic downturns and bouts of deflation in history."

Fratto, now a managing partner at Hamilton Place Strategies, a Washington-based consulting firm for financial companies, says monetary policy is "the least well-understood" of economic disciplines — and that makes the central bank an easy target.

Those targeting it include the "Audit the Fed" movement led by Kentucky Sen. Rand Paul, whose father Ron Paul has been a standard-bearer for gold. Trump and Sanders are among those who've endorsed the effort to scrutinize the central bank's books.

For other critics, the goal is to impose new rules on the Fed. What would they look like? Cato's Selgin favors the ideas of a school known as market monetarists, who say the money supply should be adjusted according to a target for overall spending in the economy.

Another, better-known option is the Taylor Rule, which dictates interest-rate adjustments based on changes to inflation and output. The formula has fans in Congress. It's surfaced in some of the multiple bills aimed at overhauling the Fed — none of which have yet reached the floor of the House.

Bill Huizenga, a Michigan Republican and chairman of the House Financial Services subcommittee on monetary policy, sponsored one of them. He sees talk of a new gold standard as "more of an academic exercise than a real-world exercise," but supports rules that would restrain the "games being played" by central banks worldwide.

George Gilder thinks gold-standard ideas are on the way back whatever the politicians do. Founder and chairman of the Gilder Technology Group and a bestselling author who helped popularize supply-side economics in the Reagan era, he says the trillions of dollars that fly around global currency markets every day are a "bizarre abuse of capitalism," sucking vitality out of the real economy.

Gilder sees hope in countries like China that are "oriented toward a gold valuation" — the Chinese are unfairly maligned for manipulating their currency, he says, when what they wanted was to do the opposite and fix its value — and in the rise of bitcoin, a digital version of gold.

Running through a lot of the gold talk is an apocalyptic strain. True believers think a crash is coming that will blow away the current consensus, leaving only their ideas standing.

Gilder sees a political backlash when negative interest rates start taking away people's savings. Jim Rickards, chief global strategist at money manager West Shore Funds and author of "The New Case for Gold," says the Fed and its peers have expanded their balance sheets to "the outer limit of confidence."

Rickards helped negotiate the rescue of Long-Term Capital Management in the late 1990s and says it's been downhill ever since. "In 1998, Wall Street bailed out a hedge fund. In 2008 the Fed bailed out Wall Street," he said. "What's going to happen in 2018? It's going to be the IMF bailing out the central banks."

He sees a chance of "close to 100 percent" that a downturn worse than the Great Recession is on the way in the next few years — and then, "you're going to be hearing a lot more about gold."

The grocer joins a growing list of stores lifting mask requirements for the fully vaccinated in accordance with new federal public health guidance.

Gold bars inside the Denver Mint in Denver in October. The gold standard is one of the oldest ideas about money, but the hardest of hard-money hawks sense an opening to breathe new life into it.  Bloomberg photo by Luke Sharrett.

Pedestrians walk past the New York Stock Exchange in 2015. Rumbling discontent with the economy has left the financial establishment under siege, raising the appeal in some quarters of a return to the gold standard.  Bloomberg photo by Chris Goodney.