Ferguson apartment complex tells some low-income tenants to leave, but housing authority says they can stay
0 comments
Share this
Support local journalism for 99¢
1 of 2

Movers carry a resident’s furniture out of an apartment at the Park Ridge Apartments, a complex owned by T.E.H. Realty, on Wednesday, Oct. 10, 2018. The city of Ferguson condemned the apartment building on Tuesday when a piece of concrete fell off a second floor walkway to the ground outside a first floor apartment. The condemnation forced residents in the building to have to move out of the building immediately. Photo by David Carson, dcarson@post-dispatch.com 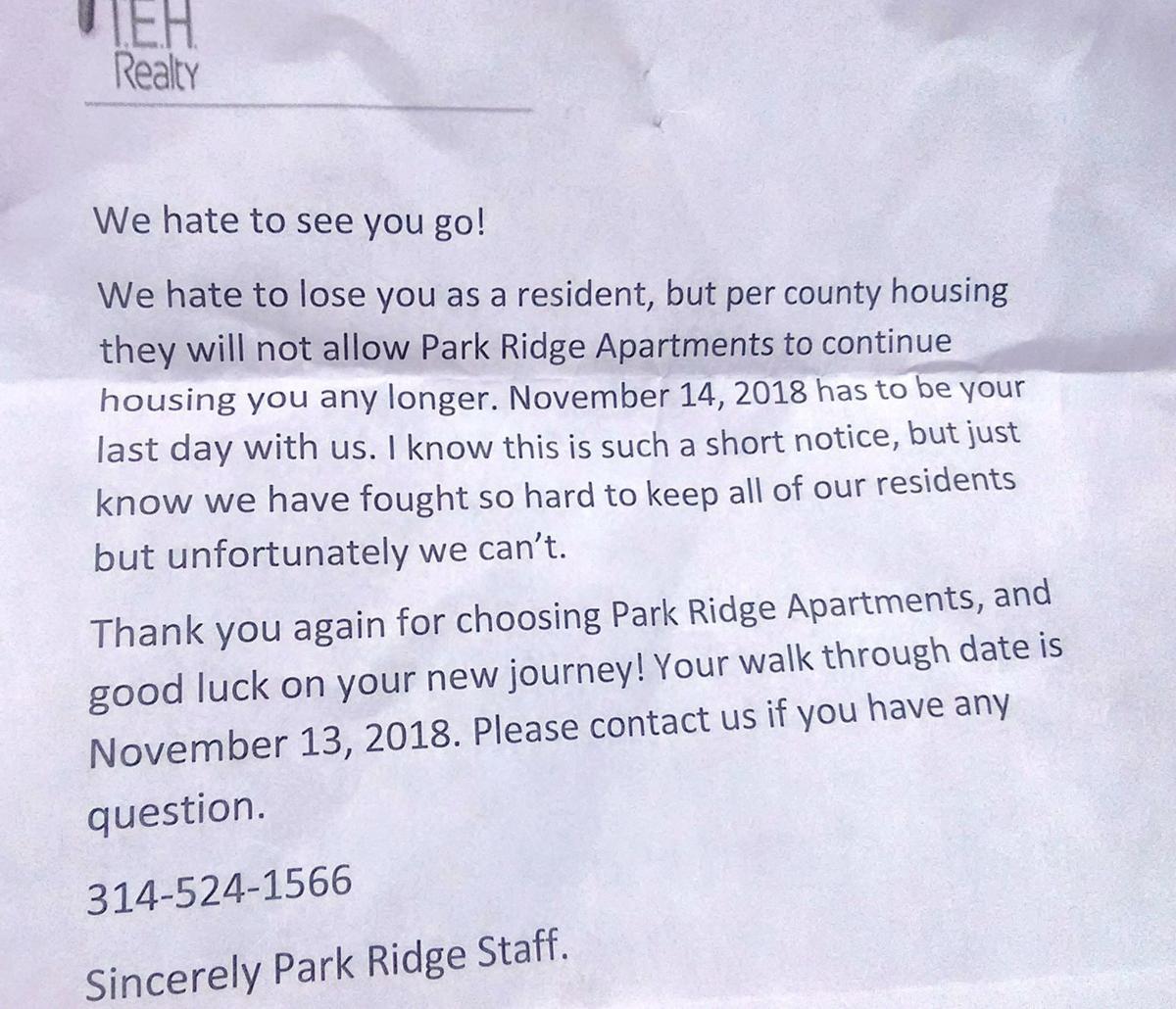 A copy of the letters sent to Park Ridge Apartments residents receiving Section 8 vouchers by T.E.H. Realty, the apartment owners. Copies of the letters were independently provided to the Post-Dispatch by Latasha Brown and the St. Louis County Housing Authority.

FERGUSON — Several tenants at the troubled Park Ridge Apartments have been told by the owner they have to move out, blaming the St. Louis County Housing Authority for threatening to pull Section 8 funding. But the head of the Housing Authority says that's not true — and the tenants did not receive proper notification.

The inspections, which took place on Oct. 25, followed reports about substandard conditions at several apartment buildings, including the 336-unit Park Ridge Apartments, which is owned by T.E.H. Realty.

After the inspections, Park Ridge management sent letters to tenants who get subsidized rent ordering them out. Some tenants were directed to leave by Nov. 14, others by Nov. 30.

"We hate to see you go!" one letter said. "We hate to lose you as a resident, but per county housing they will not allow Park Ridge Apartments to continue housing you any longer. November 14, 2018 has to be your last day with us. I know this is such a short notice, but just know we have fought so hard to keep all of our residents but unfortunately we can't."

The letter was signed "Sincerely Park Ridge Staff" and had T.E.H. Realty letterhead.

Springwood Apartments in Bel-Ridge was the first of 10 large complexes that affiliates of T.E.H. Realty have purchased in the St. Louis region since December 2014. Village inspectors recently wrote the firm at least 167 building code citations.

County officials said they learned about the Park Ridge letters when a client brought one in to the office Thursday. Housing Authority Executive Director Susan Rollins said the letters are illegal.

An email to Michael Fein, a manager with T.E.H., went unanswered. A phone number listed on the eviction letter was answered with an automated message that the number had been temporarily disabled.

Concern about conditions at the apartment complexes, many of them clustered in the southeast section of Ferguson along West Florissant Avenue, has grown in recent months as several of the properties have changed owners.

Rent is cheap at Springwood Apartments, but Bel-Ridge officials are finding lots of problems.

About a week before the inspection sweep, a walkway at a building in the Park Ridge complex collapsed, which led to a score of unsafe living conditions being uncovered. Residents living in the building were abruptly forced out because of safety concerns, but they had little time to pack and leave and had few options where to go.

"We decided that we needed to take a much closer look at the T.E.H. properties and see what they were doing," Rollins said. "The Housing Authority has the right to be proactively inspecting apartment complexes to make sure the living conditions are safe for residents."

Of the 20 buildings at Park Ridge, inspectors on Oct. 25 found problems with 19, Rollins said. Those included structural problems evident on the buildings' exteriors, prompting fears of another walkway collapse.

T.E.H. Realty took over the complex in the 1300 block of Sharondale Circle in May. The company, based in Kansas City, began in Israel in 2006 before expanding to the U.S. in 2008. T.E.H. owns properties in Pennsylvania, Tulsa, Okla., and Kansas City. It has acquired at least 2,400 rental units in the St. Louis area since 2014.

That includes Springwood Apartments in Bel-Ridge. The 271-unit complex racked up scores of citations in recent months, leading to one of its 17 buildings being condemned.

The recent inspection sweep included other nearby apartment complexes, like Canfield Green, where Mike Brown was fatally shot by a police officer on Aug. 9, 2014. The area, which includes a concentration of low-income housing, has struggled with neglect, poverty and crime.

But the timing and scale of the inspections alarmed area residents, some of whom have been forced out of apartments deemed unsafe in past years. They feared the latest inspections pointed toward impending evictions.

Latasha Brown, who heads the Southeast Ferguson Community Association, said she was surprised to find a notice of inspection at her apartment in Canfield Green because it had been inspected when she moved in about two months earlier.

Residents cite crime and maintenance issues at the Park Ridge and Northwinds complexes, whose owners have benefited from millions in low-income housing tax credits.

In addition to the Park Ridge eviction letters, Brown also got calls from residents of Northwinds apartments, a nearby low-income housing property with 438 units. She said 270 people paying market rate at Northwinds had gotten a letter from T.E.H. telling them they owed money and needed to pay up or face eviction.

Brown said she went to Northwinds on Thursday but couldn't get into the office because it was packed with tenants.

"This has been an ongoing problem and it has gotten worse," said Brown, who used to live at Park Ridge and had to move out in 2016 after her apartment failed inspections. "When we ask questions, we get no answers."

Sharon Hooks was one of the residents who had to move out of her Park Ridge apartment in October after the walkway collapsed. She's been living out of boxes since.

She arrived home on Thursday to find a letter from T.E.H. that ordered her to leave by Nov. 30.

"We don’t know what to believe no more," she said.

Melanie Randels, a Ferguson resident and activist  who helped residents forced out of the condemned Springwood building, said she knows of a handful of tenants who moved out of Park Ridge and the nearby Northwinds apartments in recent days because of the inspections and letters.

"They said they were told that anyone who has vouchers will have to leave," she said.

Brown planned a neighborhood association meeting at 6 p.m. Wednesday at the Ferguson Community Empowerment Center to try to get answers. She invited Rollins, who confirmed Friday that she will be attending. Tenant advocates and representatives of legal nonprofits are also expected to attend.

T.E.H. has not responded to the authority's requests for comments or notices that it needs to make repairs, Rollins said.

After the inspections, the other two owners of the apartments got to work making repairs, Rollins said. T.E.H. did not.

Rollins said the authority has not pulled any vouchers or funding from Park Ridge, but had barred the complex from accepting new Section 8 rental applications until it made necessary repairs. The authority has given T.E.H. until April to get them done.

"We decided T.E.H. needed to be told and sometimes the only way to tell them anything is that we are the Housing Authority and we can withhold funds from you if you're not doing what you're supposed to be doing," Rollins said.

Confusion reigns at Ferguson apartments where tenants were ordered out

Some residents fear they will be homeless soon because of letters sent by the complexes' owner.

It was one of 12 low-income apartment complexes the firm has purchased in the region since late 2014.

Movers carry a resident’s furniture out of an apartment at the Park Ridge Apartments, a complex owned by T.E.H. Realty, on Wednesday, Oct. 10, 2018. The city of Ferguson condemned the apartment building on Tuesday when a piece of concrete fell off a second floor walkway to the ground outside a first floor apartment. The condemnation forced residents in the building to have to move out of the building immediately. Photo by David Carson, dcarson@post-dispatch.com

A copy of the letters sent to Park Ridge Apartments residents receiving Section 8 vouchers by T.E.H. Realty, the apartment owners. Copies of the letters were independently provided to the Post-Dispatch by Latasha Brown and the St. Louis County Housing Authority.