Become a Member
Read Today's E-edition
Share This
Foreclosures are cheap, but be careful
0 comments
Share this
1 of 3 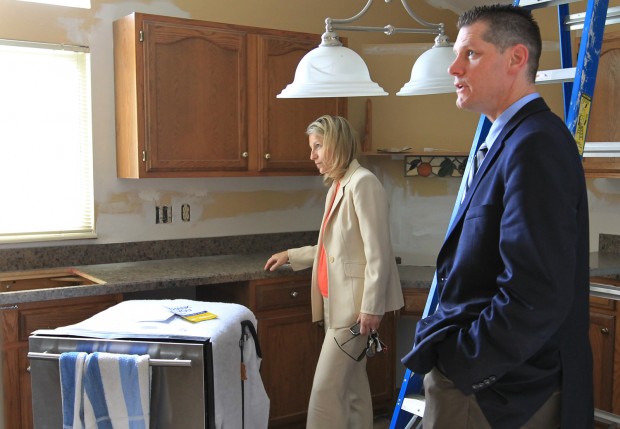 Brian and Christina Jenkins look over the work they still have to do in the kitchen on Tuesday, May 28, 2013, on a home they purchased in north county in the Barrington Downs subdivision before they can rent out the home. Photo by J.B. Forbes jforbes@post-dispatch.com 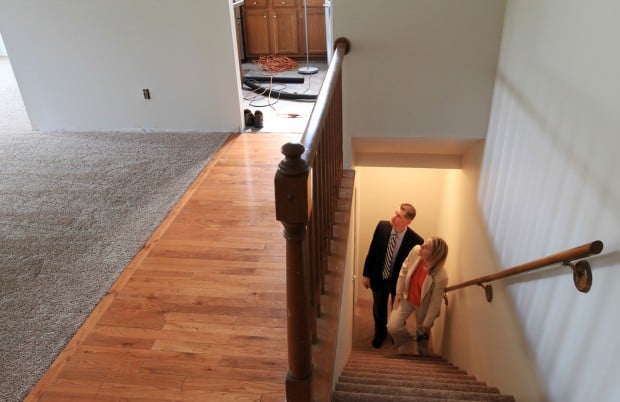 Brian and Christina Jenkins look over the work they still have to do on Tuesday, May 28, 2013, on a home they purchased in north county in the Barrington Downs subdivision before they can rent out the home. Photo by J.B. Forbes jforbes@post-dispatch.com 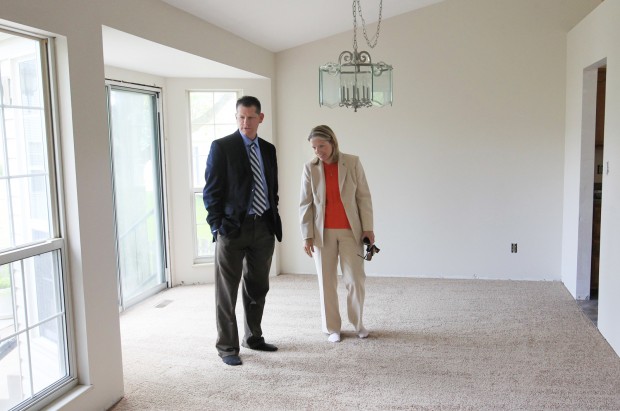 Brian and Christina Jenkins look over the new carpeting that was just installed and the work they still have to do on Tuesday, May 28, 2013, on a home they purchased in north county in the Barrington Downs subdivision before they can rent out the home. Photo by J.B. Forbes jforbes@post-dispatch.com

Back in 2011, Christina and Brian Jenkins decided to take up a sideline as landlords. Since then, they’ve acquired three rental houses in St. Charles and north St. Louis counties. Two of them were foreclosures.

They have advice for those who want to pick up a foreclosed house on the cheap, and it comes from a fairy tale.

“You have to go through a lot of frogs before you find a prince,” says Christina Jenkins.

The frogs may have ripped-out plumbing, or a crumbling roof or an air conditioner that disappeared. The princes sit in nice neighborhoods and need some paint, carpeting and other minor fixes.

The princes and frogs have one thing in common. They’re usually cheap compared with houses of similar size in the neighborhood. That’s what attracts landlords as well as would-be homeowners.

Foreclosed property on average goes for prices 37 percent cheaper than similar owner-sold homes in St. Louis, according to RealtyTrac, an online foreclosure market. There were 1,354 foreclosed homes sold here in the last three months of last year, making up 14 percent of all sales.

In our region, foreclosures are highly concentrated in north St. Louis County, although there are some nearly everywhere. RealtyTrac counted three for sale this year in ZIP code 63124, which covers Ladue.

To a buyer, a foreclosure is a mystery house. The old homeowner is long gone, so there’s no one to fill out disclosure forms listing problems with the house.

Homeowners facing foreclosure do little maintenance, and the process can drag on for more than a year. Even with the homeowner gone, the house can sit vacant for months before the bank puts it on the market — time for roofs to start leaking, thieves to rip out the copper pipes, basements to fill up with water and mold to climb the walls.

That’s why buyers should make purchase offers contingent on a professional building inspection. The banks and government agencies that own foreclosed homes generally won’t make repairs. But at least the buyers will know what they’re getting into.

The Jenkinses shop for houses in the $80,000 to $100,000 range. Their last foreclosure purchase was a house in the Hazelwood School District. The carpet smelled and the house needed “elbow grease,” Christina Jenkins says. But the hardwood floors were pretty and the Jenkinses thought renters would like it.

They found themselves in a bidding war.

“There were multiple offers. We went back and forth two or three times — once after we gave them our ‘best and highest’ offer,” she says.

“Usually, they’re priced pretty reasonably,” says Dennis Norman, who has negotiated many foreclosure sales at MORE Realtors in Chesterfield. “The buyer has to get there immediately. People flock to them.”

The bidding process can put off buyers, Norman says. Instead of replying to an offer quickly, the bank may sit back and collect several, then they ask bidders for their best and final bid.

To sweeten the pot, the Jenkinses took a chance and waived the building inspection on their last house. By that time, the couple figured they knew what they were doing.

“We can look past the ugly,” says Christina Jenkins. Instead, she looks for structural soundness. “Is it eaten by termites? Is there a flood problem? Is there mold?”

Then they calculate how much it will take to make it attractive to a renter. “It’s not just the value. It’s what we’ll have to put into it. Is it in the right neighborhood?” Landlords check ads for rentals in the neighborhood to get an idea of what rent to charge.

The Jenkinses got the idea to become landlords while helping a relative shop for a rental home. They saw the rents landlords were getting; compared it to prices of homes and saw a profit to be made. How much? The long-term return of the stock market is 8 percent, notes Christina, who is an accountant. Anything over that is gravy for an investor with a long horizon, and she’s anticipating gravy.

Competition is fierce, he says. His last purchase was in Sunset Hills and it drew 12 offers the first day it was on the market. “Lowball offers are not going to work,” he says. “The price they’re listed for is what they go for.”

To get a leg up on other buyers on the best homes, he won’t demand a home inspection contingency, and sometimes offers all-cash. Banks will sometimes take an offer $10,000 to $20,000 lower than the competition for a buyer offering cash and no contingencies.

On the other hand, some foreclosed properties are so bad that the bank doesn’t try to sell them. “They release the deed,” says Roberts, who also works in St. Louis County’s housing rehabilitation program. In effect, the bank abandons the property. “They become a liability of the county or the municipality,” Roberts says.

NOT JUST FOR INVESTORS

The presence of landlords flush with cash is a problem for families who want to buy a foreclosure to live in. So, Fannie Mae and Freddie Mac give such families a head start. The two big government-controlled mortgage companies own lots of foreclosed houses. For the first two weeks a house is on the market, only would-be occupants can bid.

For people with good credit and a substantial down payment, getting a mortgage for a foreclosed home is usually no problem, says Jeff Griege of Paramount Mortgage. They’ll get a conventional loan.

“The home has to be habitable. It can’t be in poor condition. It must have a functional bathroom. The kitchen has to be there,” he says.

Problems come when a buyer with only a small down payment wants to go FHA. The Federal Housing Administration will back a loan with only a 3.5 percent down payment, but it has tougher standards for the home’s condition. Delays caused by going FHA can prompt the bank to reject the offer.

Fannie Mae and Freddie Mac have loan programs for people who buy their foreclosures. They require no appraisal, which can save the homeowner about $450, and no mortgage insurance. Freddie’s requires as little as 5 percent down payment, and Fannie will take 3 percent. The Freddie Mac program, called HomeSteps Financing, is available in Illinois, but not Missouri. Freddie plans to roll it out to more states this year.

The FHA offers a “203k” loan which will cover some rehab costs for homes needing lots of work. “It’s cumbersome. It won’t be a 30-day closing,” says Griege. The buyer must hire qualified contractors, and the FHA will check the reasonableness of the bid.

Find out about home sales in your neighborhood

Track median home prices for your town since 2000 in our searchable database, and see how they're recovered since the Great Recession.

St. Louis is a good town for buying fixer-uppers

St. Louis is the fourth-best place in the country for buying cheap old fixer-upper houses, according to RealtyTrac.

Not according to a recent inspector general's report, which found that about half of homeowners who won loan modifications still failed and ended up facing foreclosure again.

Some potential sellers are holding out for better prices; others are just stuck.

Buying a home after short sales and foreclosures

For people whose income and credit took a hit in the recession, there's hope.

Brian and Christina Jenkins look over the work they still have to do in the kitchen on Tuesday, May 28, 2013, on a home they purchased in north county in the Barrington Downs subdivision before they can rent out the home. Photo by J.B. Forbes jforbes@post-dispatch.com

Brian and Christina Jenkins look over the work they still have to do on Tuesday, May 28, 2013, on a home they purchased in north county in the Barrington Downs subdivision before they can rent out the home. Photo by J.B. Forbes jforbes@post-dispatch.com

Brian and Christina Jenkins look over the new carpeting that was just installed and the work they still have to do on Tuesday, May 28, 2013, on a home they purchased in north county in the Barrington Downs subdivision before they can rent out the home. Photo by J.B. Forbes jforbes@post-dispatch.com