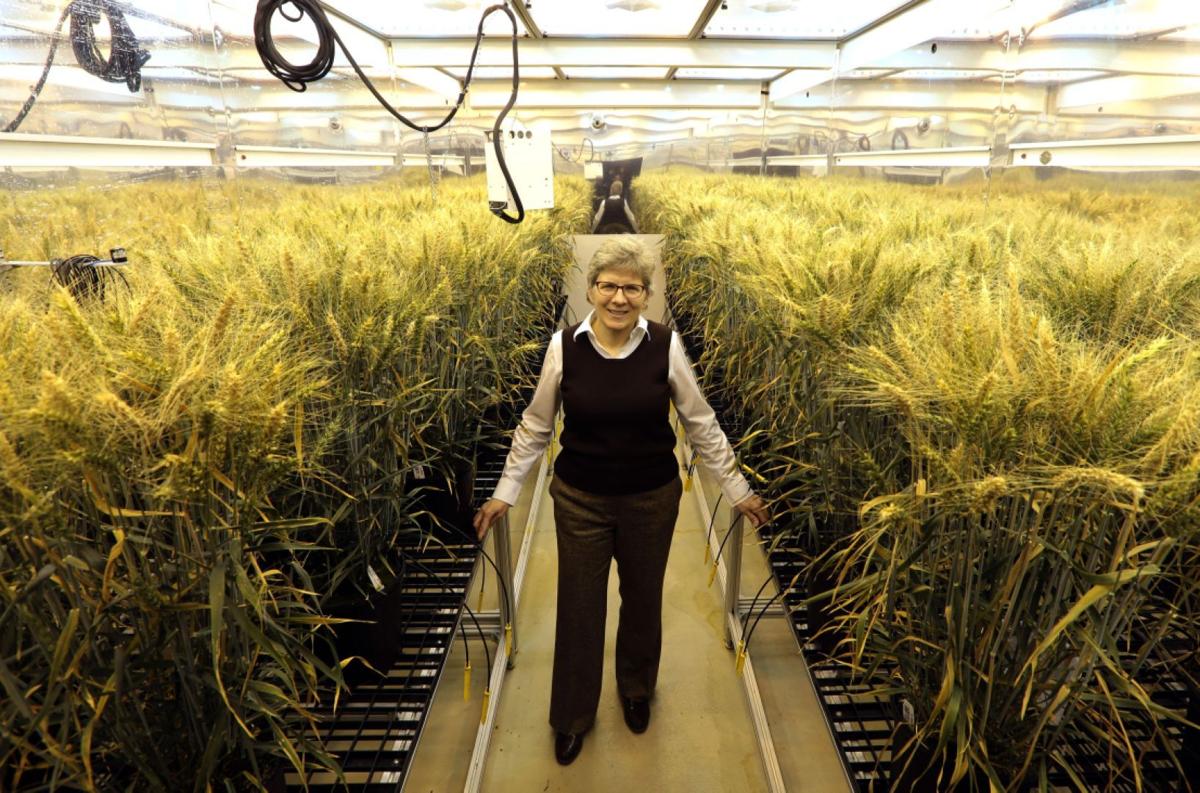 Monsanto is once again pursuing development of genetically modified wheat - something it abandoned in the 1990s after meeting stiff resistance from farmers worried about consumer reaction. Claire CaJacob, Global Wheat Technology Lead, has her portrait taken inside a growth chamber with three month old wheat on Thursday, Jan. 8, 2014, at Monsanto's Chesterfield Village Research Center. The growing conditions simulate a summer day in North Dakota. Photo by Laurie Skrivan, lskrivan@post-dispatch.com 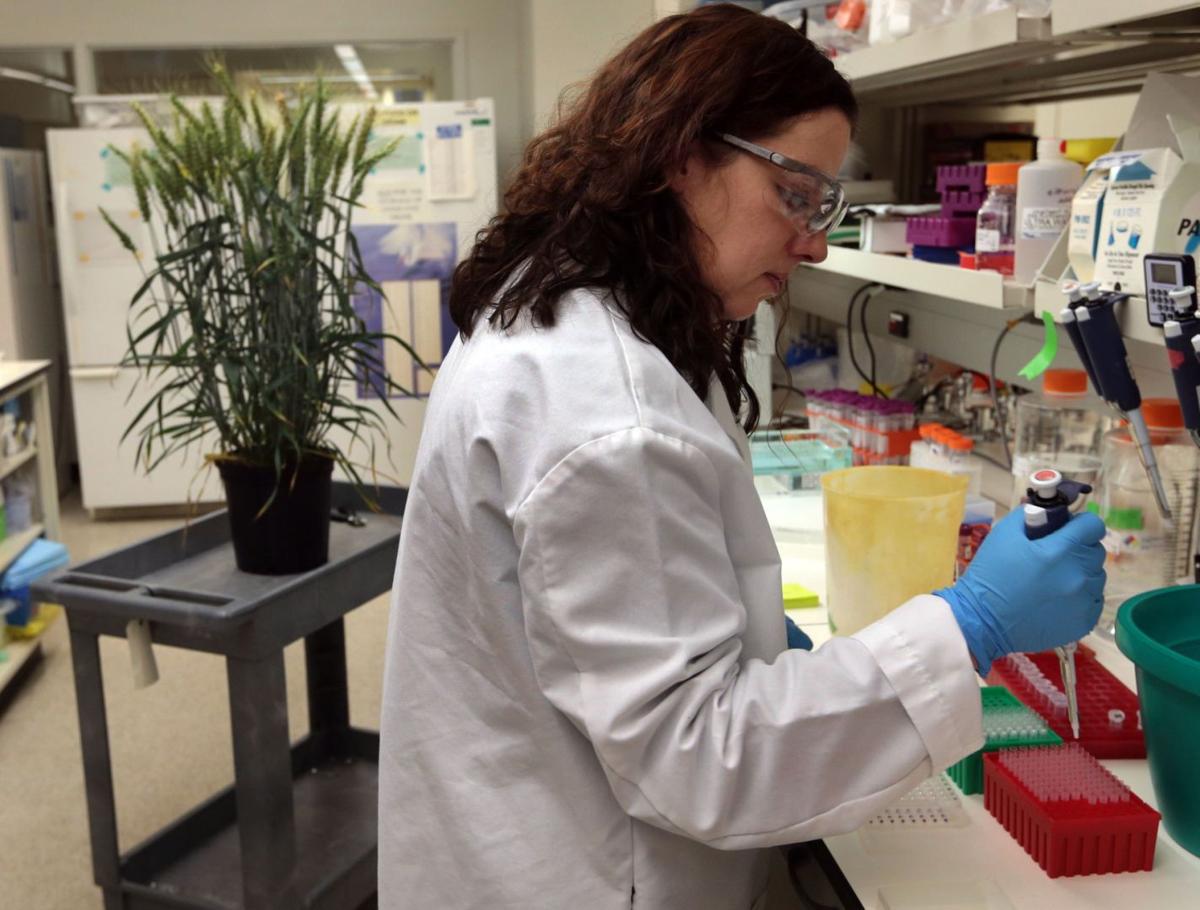 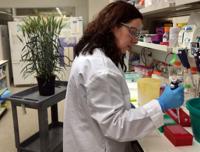 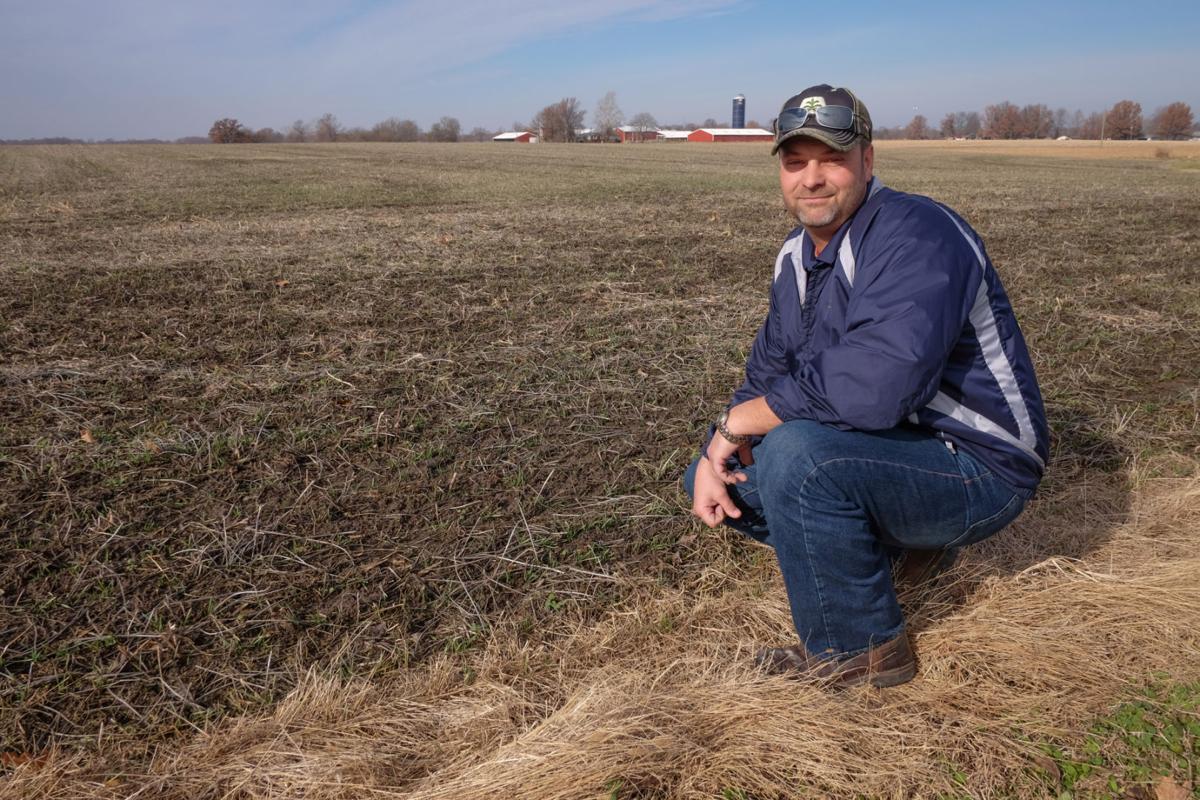 Kyle Brase is seen near one of his recently-planted wheat fields in Edwardsville, Ill., on Dec. 3, 2014. The fifth-generation farmer grows genetically-modified corn and soybeans. But he isn't sure the consumer market is ready for GMO wheat. (Photo by Tim Barker/tbarker@post-dispatch.com)

CHESTERFIELD • At the heart of Monsanto’s global research operation is a structure with a rather ordinary name. But on the fourth floor of Building GG is a room where the future of wheat may be changing.

The facility has dozens of rooms just like it. But inside this particular 10-foot-by-20-foot growth chamber — whose mirrored walls and sun-bright lamps can imitate the weather of any U.S. field — is a batch of young wheat plants.

They’re part of an intensive effort to use breeding and gene manipulation to make a new kind of wheat. The plants represent several years’ worth of work aimed at creating a plant that’s resistant to a trio of herbicides.

The research has the attention of supporters and critics alike.

The supporters tout the work being done at the Chesterfield Village Research Center as critical to feeding a growing global population, while the critics say the world isn’t ready for the genetic modification of a dinner table staple.

For Creve Coeur-based Monsanto, it is an expensive and time-consuming quest. It costs $150 million or more to add just one new genetic trait to a seed. Add a long development timeline — including field trials and regulatory approvals — and it could be another decade before the company is ready to put its new wheat seeds in farmers’ hands.

“People think we’re being coy about it. But we really don’t know,” said Claire CaJacob, director of the company’s wheat research.

It takes a combination of traditional breeding and genetic enhancement to mate the ideal plant with the right genetic sequences to arm it with the ability to shrug off the herbicides dicamba, glufosinate and glyphosate — Monsanto’s signature weedkiller sold as Roundup.

To get there, researchers will sift through hundreds of thousands of plants.

“You have to find the one plant that’s going to be the parent of every other seed out there,” CaJacob said.

The funny thing (though the company probably sees no humor) is that this isn’t the first time Monsanto has sought the perfect wheat plant. They found it before.

A decade ago, the agriculture giant was on the verge of seeking regulatory approval for a Roundup Ready version of hard red spring wheat, typically used for bread flour.

But in May 2004, Monsanto halted the program, citing changing market conditions. It was clear that growers — worried about consumer backlash — weren’t ready.

“There was massive opposition,” said Bill Freese, a GMO critic and science policy analyst for the Center for Food Safety.

It didn’t take long, however, before wheat farmers grew tired of watching neighbors switch to more profitable corn and soybeans — both having seen greater yield increases fueled by stronger breeding programs and genetic modifications. By 2006, the number of U.S. acres planted with wheat had dropped to 57 million, down from 75 million a decade earlier. Soybeans, on the other hand, surged from 64 million to 75 million during the same period, according to the U.S. Department of Agriculture.

“We came to the conclusion that we had to do something,” said Paul Penner, president of the National Association of Wheat Growers. “It’s no fun raising wheat if you are making a loss on it.”

So in 2008, the group asked its members if they were ready for GMO wheat.

A survey went to 21,000 growers in the organization. A third of them answered, with 76 percent saying yes.

The change of heart should not be surprising, said Jason Lusk, an agriculture professor at Oklahoma State University and a supporter of GMO wheat.

“They can see some of the benefits that other groups have enjoyed,” Lusk said. “Why deny producers the choice?”

In the summer of 2009, the company revived its wheat program and grabbed the raw seed materials needed by its scientists, spending $45 million on WestBred, a Montana wheat breeding company.

In late 2013, a scare went through the global wheat market after an Oregon farmer found a rogue GMO wheat plant growing in one of his fields. This was a dozen years after Monsanto ended its testing in that state.

The discovery of that single plant sent shock waves through the industry, with several key overseas buyers — including Japan and South Korea — suspending purchases of U.S. wheat, over fears of contamination.

The crisis passed after a few months, though it offered a strong reminder that GMO wheat still faces hurdles beyond those encountered by other crops.

The reason is simple: Corn, soybeans and cotton aren’t generally considered food. With obvious exceptions, those crops are mostly eaten by animals or turned into fuel or clothing. But wheat is bread, pasta and pastries.

It’s what makes Kyle Brase, a fifth-generation Edwardsville farmer, question the wisdom of pursuing GMO wheat at this time.

Brase, whose family works some 3,000 acres, isn’t opposed to GMOs for most crops. But wheat is different.

“So much of it goes right into the food chain,” Brase said. “We really need to have the vast majority of the consumers on board before we bring it to market.”

You only have to look at potatoes to see a basis for his concerns.

This month, J.R. Simplot Co. suffered a blow when its new GMO potato was rejected by one of its major buyers — fast-food giant McDonald’s. The Innate potato has been modified to produce less acrylamide — a suspected human carcinogen — when cooked.

Monsanto ran into a similar problem in the 1990s, with one of its first modified seeds, the NewLeaf potato, designed to produce a toxin that repelled beetles. That program was shuttered in 2001 after meeting resistance from GMO-wary farmers and McDonald’s, which reportedly told suppliers to stay away from the potato.

In the end, however, the fate of GMO wheat could be decided by the economics of supply and demand.

Some agriculture observers say growing demand may eventually force the market, and consumers, to accept modified wheat because of its promise of greater yields.

We got a glimpse of what the future could look like in 2012, when drought sapped the world’s wheat supply, said Jeff McPike, a grain broker with McDonald and Pelz in Boulder, Colo. Two years of solid crops have erased those bad memories, but that doesn’t mean the potential for shortages is over.

“This year, everyone is going to be able to relax. But that’s just a short-term thing,” McPike said. “Five to 10 years from now, we are going to have to make that choice, or change our diets.”

It’s seems logical to ask why Monsanto — when it resumed wheat research — didn’t simply pull its old program out of mothballs.

A lot has changed since 2004, including the rise of weeds with immunity to glyphosate. From Monsanto’s view, the window has closed on Roundup Ready wheat.

Now it wants to sell farmers a newer generation of seeds immune to a variety of herbicides. The idea is to get farmers closer to the early days of Roundup, when weed control was made simpler by a spray that could kill everything in a field except the protected crop.

That’s what concerns critics, who blame Monsanto for the so-called “superweeds” that have sprung up across the nation. Generally they result from the too-frequent use of an herbicide — in this case, glyphosate. A new generation of modified corn, soybeans or wheat won’t change that, said Freese from the Center for Food Safety.

“The last thing we need is another herbicide-resistant crop,” he said. “It’s just a really bad idea. And we should realize that by now.”

But Monsanto and other biotech supporters have long touted the promise that genetic modification holds for crops — beyond making them herbicide tolerant. For example, they point to the development of a trait that allows corn and cotton to naturally produce Bacillus thuringiensis, or Bt, a toxin that kills root worms and other insects.

And there’s long been talk of modifying crops to perform better in droughts or in areas where growing conditions are less than ideal.

Such is the work being done by David Lightfoot, a professor of biotechnology and genomics at Southern Illinois University Carbondale.

His work involves inserting a protein into plants that creates glutamate, an amino acid that helps them survive dry spells and recover more quickly when rain returns.

Lightfoot is testing the modification in wheat, but it has already shown promise in corn and soybeans and is in Monsanto’s development pipeline. At this point, Lightfoot said, it’s up to the company to figure out when to include the trait in its commercial products.

“It’s just a question of when it’s the right time,” he said.

Until then, there will be those skeptical of what genetic modification offers — aside from seeds that let farmers use herbicides sold by the makers of those seeds.

David Hole, a professor of plant breeding and genetics at Utah State University, has been involved in conventional wheat breeding for some 25 years. And he isn’t convinced that better yields for GMO crops is related to anything other than strong breeding programs within companies like Monsanto. The actual genetic part of it, he argues, hasn’t lived up to the hype.

“There’s a potential out there,” Hole said. “It just hasn’t been completely realized.”

Timothy Barker is a reporter for the St. Louis Post-Dispatch.

An increasing number of weeds are Roundup-resistant, forcing changes in agricultural practices.

Monsanto is once again pursuing development of genetically modified wheat - something it abandoned in the 1990s after meeting stiff resistance from farmers worried about consumer reaction. Claire CaJacob, Global Wheat Technology Lead, has her portrait taken inside a growth chamber with three month old wheat on Thursday, Jan. 8, 2014, at Monsanto's Chesterfield Village Research Center. The growing conditions simulate a summer day in North Dakota. Photo by Laurie Skrivan, lskrivan@post-dispatch.com

Kyle Brase is seen near one of his recently-planted wheat fields in Edwardsville, Ill., on Dec. 3, 2014. The fifth-generation farmer grows genetically-modified corn and soybeans. But he isn't sure the consumer market is ready for GMO wheat. (Photo by Tim Barker/tbarker@post-dispatch.com)