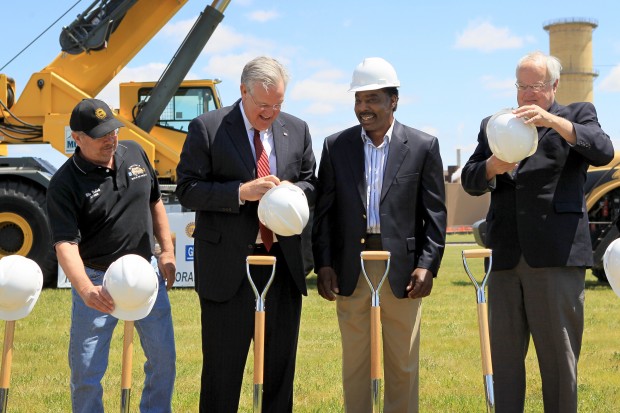 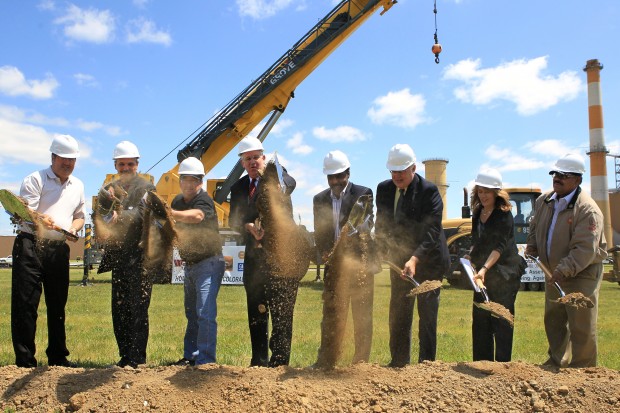 Gov. Jay Nixon (fourth from left) joins other officials to break ground at the future site of a 500,000-square-foot expansion of the General Motors assembly plant in Wentzville on Monday, May 21, 2012. Photo by David Carson, dcarson@post-dispatch.com

Buoyant one moment, the suddenly subdued dignitaries and automakers stepped into a trap Monday when St. Charles County Executive Steve Ehlmann asked for a moment of silence.

The ground was technically broken a few days ago on the $380-million expansion of the Wentzvile GM assembly plant that will start production of the new Chevrolet Colorado mid-sized pickup.

Nixon hailed the announcement as part of the "rebirth of the American auto industry."

The Colorado will be added to a line that currently produces the Chevrolet Express and GMC Savana full-size vans.

Building GM's next generation Colorado will bring an additional 1,260 hourly and salaried jobs in 2013.

Some workers at the GM facility now producing the Colorado in Shreveport, La. are expected to accept the company's offer to move to Missouri.

But Mike Bullock, the chairman of UAW Local 2250 said he expects up to 80 percent of the jobs might ultimately be filled by St. Louis area residents.

The Wentzville plant, which shed 900 jobs during the recession, had 450 hires last year when it brought back a second production shift.

"It's great to be growing rather than shrinking," said plant manager John Dansby.

Back from the brink, GM plant manager heralds Wentzville revival

AT&T has ordered 1,200 compressed natural gas Chevrolet Express cargo vans to add to its fleet of service vehicles that will be assembled …

A job at General Motors is worth driving 180 miles a day. At least Kevin Hulsey thinks so.

They will work a second shift that's set to begin in early January, marking the first time in two years that the plant has run more than a single shift.

Toyota subsidiary in Troy and St. Louis forges ahead

Bodine Aluminum, manufacturer of engine blocks for Toyota, is commemorating its 100th year in business

Gov. Jay Nixon (fourth from left) joins other officials to break ground at the future site of a 500,000-square-foot expansion of the General Motors assembly plant in Wentzville on Monday, May 21, 2012. Photo by David Carson, dcarson@post-dispatch.com