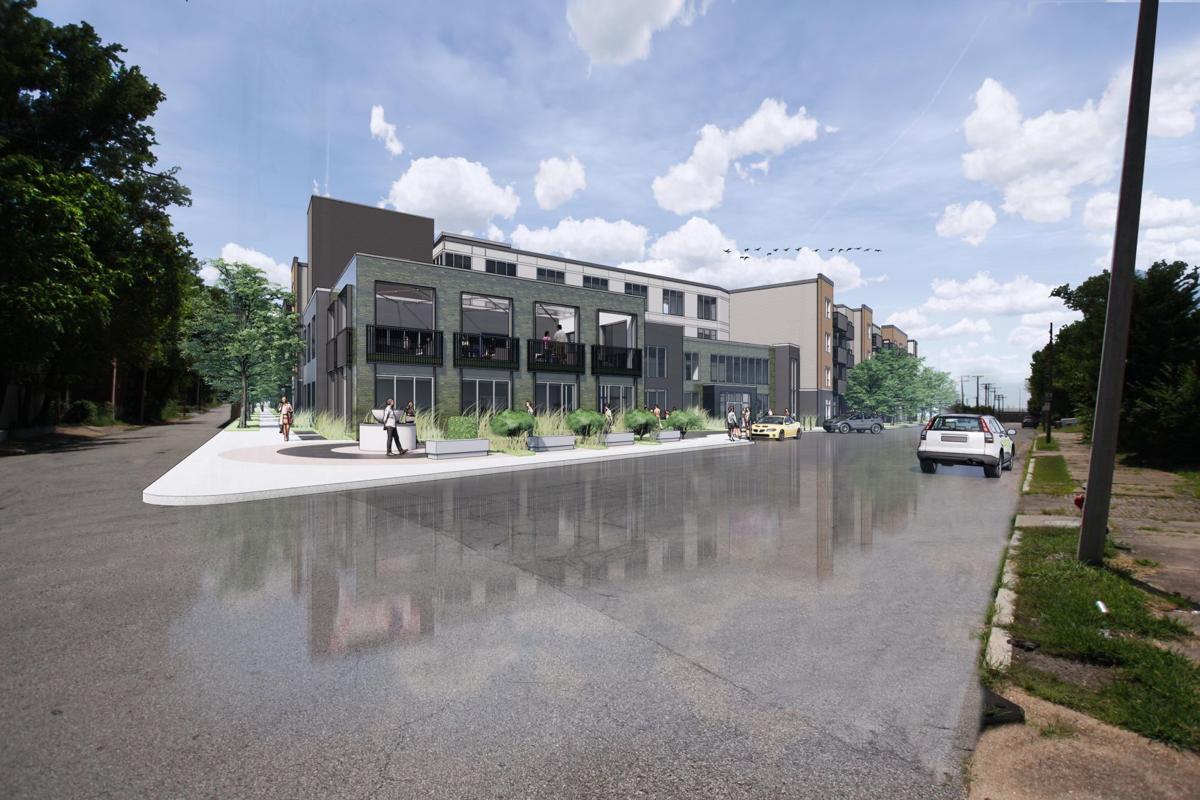 Developer Green Street plans a 307-unit apartment building at the corner of Swan and Taylor avenues, a block south of the Grove entertainment district on Manchester Avenue. (Rendering courtesy of Green Street development).

Rowhouses planned along Vista Avenue as part of the second phase of the Unify Grove mixed-income development in the Forest Park Southeast neighborhood (rendering courtesy Green Street and architect JEMA).

One of the apartment buildings planned at Vista and Newstead avenues as part of the second phase of the mixed-income Unify Grove development (rendering via Green Street and architect JEMA).

A $55 million plan for the corner of Swan and Taylor avenues would add 307 apartments and 1,400 square feet of commercial space to the site occupied by two industrial buildings that Green Street plans to demolish. The 6-acre site would also get a 381-spot parking garage as part of the plan.

That project is being paired with a second, scattered-site development that would build 168 apartments and town homes on six sites to the east of Taylor. Half of those apartments would be leased at below-market rate in order to maintain some income diversity in the quickly redeveloping neighborhood.

The projects follow Green Street’s 235-apartment Chroma project at the northeast end of the neighborhood near Vandeventer and Manchester avenues, which it co-developed with the Koman Group.

The latest projects are near the southwest corner of the neighborhood, about a block south of Manchester and the popular Urban Chestnut Brewing beer hall that Clayton-based Green Street also helped develop. Construction is scheduled to begin in the second quarter and be complete by the summer of 2021. Rental rates are estimated at around $2.05 per square foot.

“Our hope is to bring some density to that end of the Grove,” Green Street President Brian Pratt told the city’s Land Clearance for Redevelopment Authority.

LCRA recommended 10 years of 75% tax abatement for the 307-unit market rate project on Swan. Board member Sean Spencer called it a “bold statement” and an “investment in a long-neglected area” of the neighborhood.

The mixed-income project, meanwhile, is the second phase of a mixed-income development process overseen by the Washington University Medical Center Redevelopment Corporation. The first, Adams Grove, included 50 affordable homes developed in the neighborhood and 46 market-rate homes.

Green Street will be involved in the second phase of that plan, this time developing smaller apartment buildings and connected row homes on several sites on Vista, Norfolk and Swan avenues. The $27.6 million worth of projects should start around the same time as the large apartment building in order to coordinate infrastructure improvements and open by the middle of 2021. It’s in a redevelopment area that allows an 85% property tax abatement.

Pratt said Green Street has tried to concentrate its investment in the neighborhood and still feels bullish even after all the new apartments that have opened in recent years.

“We still feel very strong there’s depth in the market,” he said.

It’s not the only project Green Street is looking at in the area. Just across the railroad tracks at 4591 and 4565 McRee Avenue, Green Street plans a $40 million rehab of two old warehouses into an entertainment venue as well as offices and bars and restaurants. The LCRA has recommended a decade of tax abatement at 50% and 90% for those projects.

Meanwhile, Amy and Amrit Gill’s Restoration St. Louis plans another apartment project on the 4400 block of Manchester Avenue across from Urban Chestnut. The $13.3 million project would add 60 apartments in a five-story building similar to their existing apartments just to the east.

Get a beer at the dog park — ‘Bar-K’ pitched for St. Louis

The location on McRee Avenue would be the second location for the Kansas City concept.

Pratt has worked for 10 years at Green Street, known for mixed-use projects concentrated in the Grove entertainment district.

It's a marquee project for the central corridor that the city's redevelopment office has a financial stake in via a $730,000 loan to the developer in 2018.

A Minnesota developer has bought into the historic property, one of the last missing teeth of the region's Central Corridor redevelopment.

Plans for the industrial building next to the warehouse being rehabbed for the dog park and bar concept hadn't been clear.

Project calls for 50 single-family homes and two, 20-unit apartment buildings next to an affordable housing project.

Missouri Foundation for Health would move its offices there from downtown in the latest project for the fast-changing neighborhood.

The 50 affordable units are scattered among market rate units being developed in the quickly-gentrifying neighborhood.

Developer Green Street plans a 307-unit apartment building at the corner of Swan and Taylor avenues, a block south of the Grove entertainment district on Manchester Avenue. (Rendering courtesy of Green Street development).

Rowhouses planned along Vista Avenue as part of the second phase of the Unify Grove mixed-income development in the Forest Park Southeast neighborhood (rendering courtesy Green Street and architect JEMA).

One of the apartment buildings planned at Vista and Newstead avenues as part of the second phase of the mixed-income Unify Grove development (rendering via Green Street and architect JEMA).