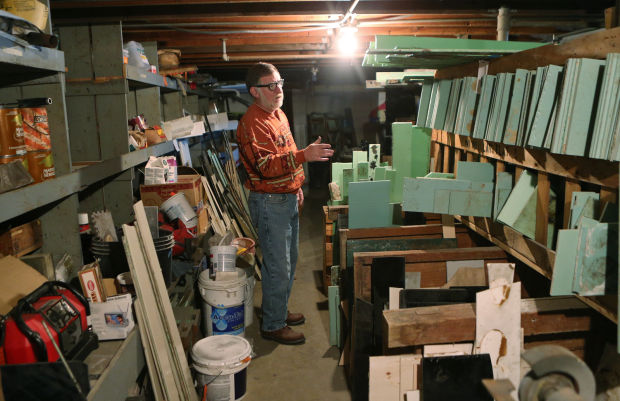 Tim Dunn shows some of the many colors of vitrolite glass he has stored in the basement of his shop in Maplewood on Wednesday afternoon, Nov. 13, 2013. Photo by J.B. Forbes, jforbes@post-dispatch.com 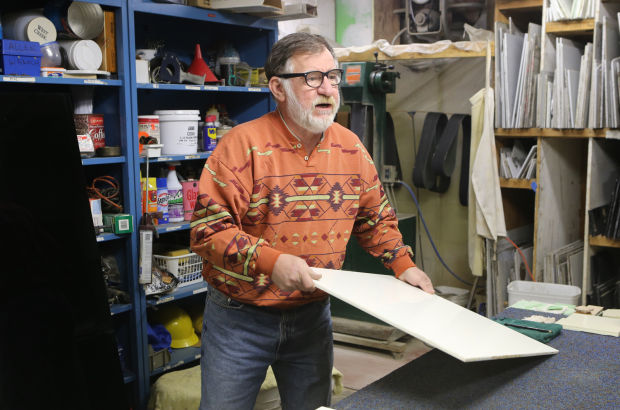 Tim Dunn shows some of the many colors of vitrolite glass he has at his shop in Maplewood on Wednesday afternoon, Nov. 13, 2013. Photo by J.B. Forbes, jforbes@post-dispatch.com 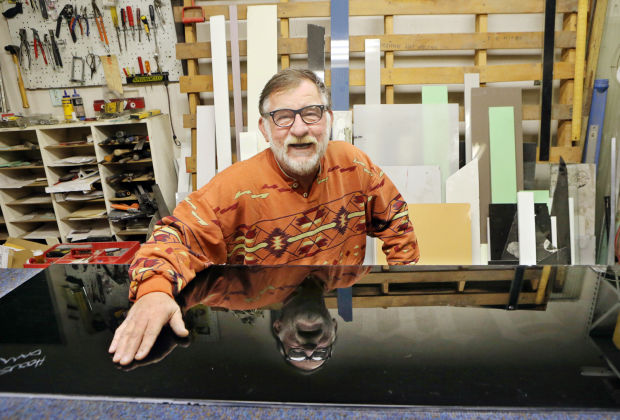 Tim Dunn poses with a piece of vitrolite black glass at his shop in Maplewood on Wednesday afternoon, Nov. 13, 2013. Dunn is going to install the glass in one of the bathrooms in the Hoover Dam. Photo by J.B. Forbes, jforbes@post-dispatch.com

The U.S. Interior Department determined that Dunn’s Vitrolite Specialist Inc., of Maplewood, is the only company with the experience, expertise and material able to restore the Vitrolite walls of the public restrooms atop Hoover Dam.

As a result, the government has awarded Vitrolite Specialist a “single-source” contract to redo the glass walls of the 1930s men’s and women’s restrooms.

Vitrolite is a structural glass once popular in Art Deco homes and on storefronts across the country. Production ended in the early 1950s and, as the Interior Department notes in classic bureaucratese, Dunn’s company is now the go-to source for Vitrolite and the skill to install it.

In its May 15 decision to hire Dunn’s company, the Interior Department also said: “The Vitrolite Specialist is the only company in the U.S. that has a sufficient supply of Vitrolite paneling in the colors and sizes needed for the Top-of-Dam Restrooms.”

Use of Vitrolite and other pigmented structural glass reached its zenith in the 1920s and 1930s as Americans swooned over Art Deco’s sleek, alluring curves. The Vitrolite Co. based in Chicago, made its product in Parkersburg, W.Va.

The special glass, mechanically ground to a mirror finish, gained some of its popularity in the 1930s when the Roosevelt administration helped storekeepers remodel their storefronts as a way to stimulate the economy during the Depression. A government program helped small-business owners pay to modernize their shops.

A few years ago, Dunn put a curved window, Art Deco touch on his base of operation, a former street-corner confectionery built in 1934. The main floor and basement are crammed with what he estimates is more than 20 tons of Vitrolite, all carefully cleaned, sorted, stacked and shelved.

Throughout the building are pieces marked “Hoover Dam.” After Thanksgiving, Dunn and his helpers will load the 700 square feet of Vitrolite into a trailer and haul it 1,600 miles to the enormous concrete structure that has plugged the Colorado River since 1935.

Not only is Hoover Dam a construction and engineering marvel, it is a National Historic Landmark with numerous Art Deco flourishes.

Nowhere is that more evident than in the public restrooms on top of the dam. Black Vitrolite covers the walls of the men’s room. Jade Vitrolite decorates the two-story women’s room.

The men’s room replacement black Vitrolite is coming from the ground floor of the Lofts at OPOP, formerly the St. Louis School Board, at 901 Locust Street downtown. A Vitrolite Specialist crew removed the shiny black panels this month.

The Vitrolite, installed decades ago in a storefront remodeling, came down as part of the building owner’s plan to redo the storefronts of the 1890s structure.

Bob Burk, whose Chicago-based UrbanStreet Group bought the building a year ago, said Thursday the storefronts will get new windows and a more modern look.

With the needed black Vitrolite in hand, Dunn tapped his vast network of Vitrolite hunters for jade-colored glass. He found some never-used jade Vitrolite in a Denver warehouse.

His Hoover Dam job is to restore 75-year-old restroom walls marred by graffiti and, according to the Interior Department, damaged by plexiglass installed years ago in a misguided repair effort. The government will pay Vitrolite Specialist $131,000 to redo restroom walls and other public areas inside the dam.

Dunn said the dam job, which will take a month, is the second-largest his company has undertaken. The largest, done last year, was to put more than 1,500 square feet of Vitrolite on the front of an old movie theater in Grand Island, Neb.

Appreciation of Art Deco’s elegant forms is making a comeback, said Dunn, who began collecting Vitrolite in 1985. As his collection grew, he took on more jobs to install Vitrolite at theaters, other commercial spaces and in residential kitchens and bathrooms across the country.

“You get into something and you keep going, you know?” he said.

Dunn, 60, got the Vitrolite collecting bug and learned how to cut and install the special glass as an apprentice to a Vitrolite expert who retired more than a decade ago. He said he jokes with his wife, Geri Redden, that his primacy in the Vitrolite business makes him a “national treasure.”

“She told me that only musicians and artists get to be national treasures,” Dunn said. “That’s not fair. I’m the only one doing this stuff.”

Vitrolite Specialist remains small. Redden is a partner in the company. Daughter Cheryl Akers is the bookkeeper. The firm also employs a warehouse worker, a subcontractor and a new Vitrolite Man in waiting.

“I’ve had an apprentice for nine years,” Dunn said.

Shiny black glass from a St. Louis storefront is now in a Hoover Dam restroom.

Tim Dunn shows some of the many colors of vitrolite glass he has stored in the basement of his shop in Maplewood on Wednesday afternoon, Nov. 13, 2013. Photo by J.B. Forbes, jforbes@post-dispatch.com

Tim Dunn shows some of the many colors of vitrolite glass he has at his shop in Maplewood on Wednesday afternoon, Nov. 13, 2013. Photo by J.B. Forbes, jforbes@post-dispatch.com

Tim Dunn poses with a piece of vitrolite black glass at his shop in Maplewood on Wednesday afternoon, Nov. 13, 2013. Dunn is going to install the glass in one of the bathrooms in the Hoover Dam. Photo by J.B. Forbes, jforbes@post-dispatch.com