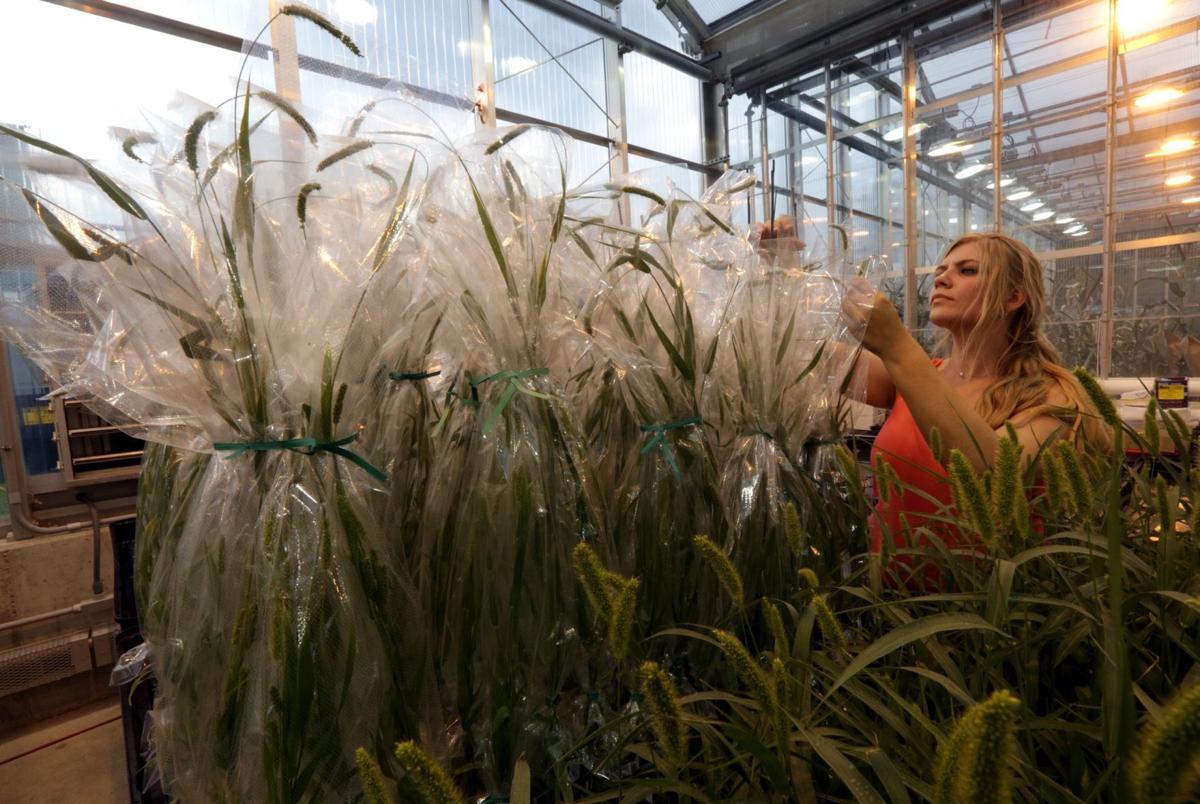 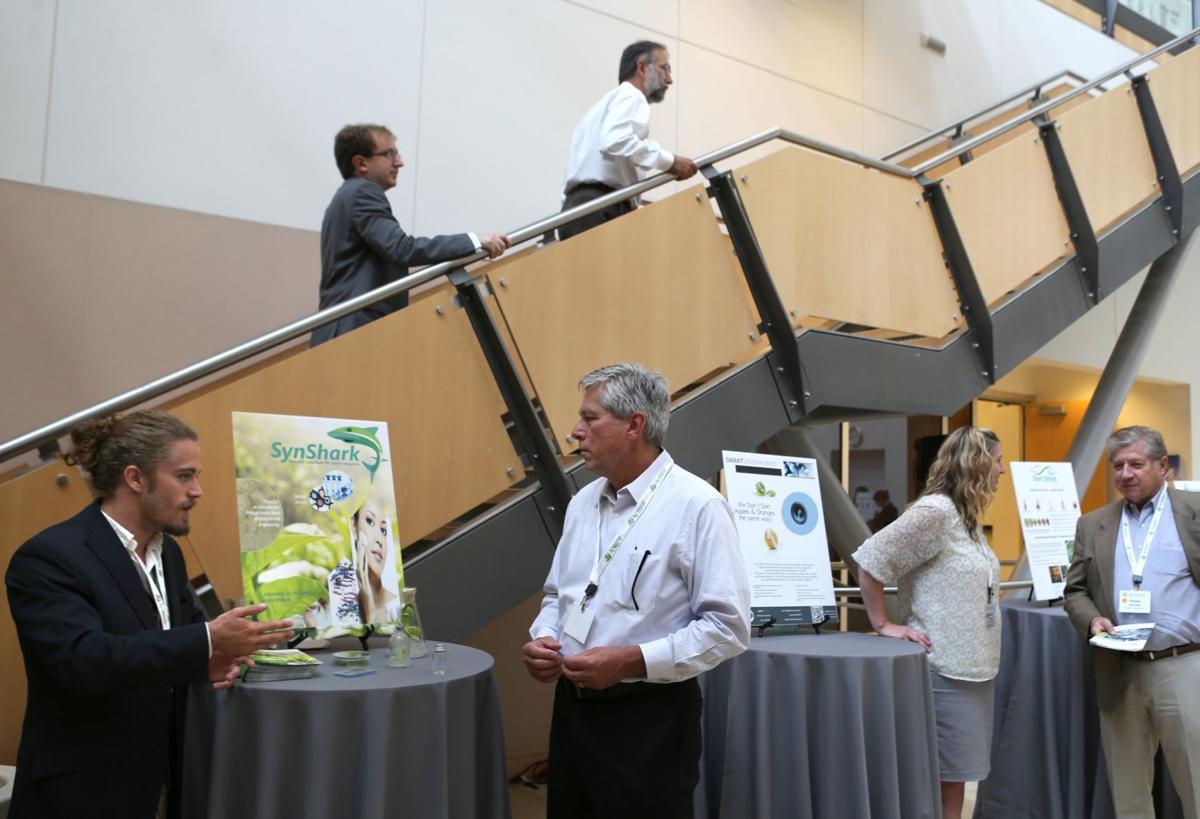 Connor Gorman (left) with SynShark talks with Mark Russell from Adjuvants Plus as people mingle at the eighth annual Ag Innovation Showcase in an area where early stage ag startups area show off their technology and ideas to potential investors and partners on Tuesday, Sept. 13, 2016. Photo By David Carson, dcarson@post-dispatch.com

CREVE COEUR • Just a day before German conglomerate Bayer’s announcement of a $66 billion deal for Monsanto, hundreds of agriculture technology entrepreneurs and investors gathered within sight of the seed company’s sprawling campus.

The people from around the world who make their way to the Donald Danforth Plant Science Center for the annual Ag Innovation Showcase are a testament to the ecosystem the St. Louis region has managed to build around ag-tech, helped in no small part by the presence of one of the giants in the industry.

More than 4,100 people in the region work at Creve Coeur-based Monsanto, and many of the young companies trying to commercialize new plant science technologies view the company as a potential partner or acquirer. The startups recruit from Monsanto, and vice versa, and the company’s charitable arm, the Monsanto Fund, donated land and provided the money for the construction of the Danforth Center, one of the premier institutes for plant research.

Now, the largest private company in the region’s biotech industry may soon be less local. German drug and plant chemical giant Bayer announced Wednesday it would buy Monsanto for $66 billion.

Attendees at the ag-tech conference this week were well aware that a deal between Bayer and Monsanto might soon be announced. Two other megadeals had already been announced in the agriculture industry in the last year.

“It was basically mentioned in every conversation,” said Nathan Kurtz, who heads entrepreneurship programs for the Kansas City-based Ewing Marion Kauffman Foundation and was in town for the conference.

How the deal might ultimately affect the region’s plant science industry is unclear. Much depends on how much Bayer’s top decision-makers in Germany decide to invest in St. Louis area operations, which will include the seeds and traits headquarters for Bayer’s crop science division.

Bayer officials emphasized that it’s in their interest to keep scientific talent in the region and to help startups grow through grants, venture funds and other outreach.

“We will want to further strengthen this going forward because the core for everything biotech, seeds and traits is going to be St. Louis,” Liam Condon, the head of Bayer’s crop science division, told the Post-Dispatch. “The ecosystem you require to thrive can never just be internal. It has to be a supporting community.”

A deal is far from certain. Antitrust regulators are expected to scrutinize the transaction closely. Monsanto’s stock, already trading well below Bayer’s offer price of $128 per share on fears that regulators will block the deal, fell 2 percent Thursday to $104.22.

Even if the deal is approved and Bayer de-emphasizes the St. Louis office, people in ag-tech note that the region has more than Monsanto going for it. The Danforth Center is thriving and just opened an expansion. Research institutions such as Washington University serve as regional anchors. Food ingredient giant Bunge’s North American headquarters is expanding in Chesterfield, and one of the world’s largest seed companies, Germany-based KWS SAAT AG, set up a research shop for 75 scientists at the Danforth Center two years ago.

“When you think about the bioscience ecosystem, Monsanto has certainly been an important anchor to that but they are by no means an oasis in a desert,” said Donn Rubin, chief executive of BioSTL, which advocates for the area’s biotech industry and runs nonprofit lab space operator BioGenerator. “There is a lot of activity going on.”

Many expect Bayer to retain much of Monsanto’s scientific workforce while cutting some overlapping corporate functions. Such cuts could shake loose talent that might migrate to startups, or launch new companies.

As big ag companies consolidate further, Crisp sees an inevitable reduction in their research and development spending. That will add to the urgency among growers and others in the food supply chain who want more innovation and choices. St. Louis, he said, has an infrastructure for ag entrepreneurs that “is second to none.”

Technologies at companies like Benson Hill, which uses big data techniques to help analyze and sequence genes, make it far faster and easier to develop new seed and plant traits. That opens up commercialization opportunities that were previously restricted to deep-pocketed giants like Monsanto.

“Growers are eager to see more innovation and less control by a handful of players,” Crisp said.

The loss of Monsanto’s headquarters doesn’t worry the investors behind Clayton-based venture capital firm Lewis & Clark Ventures. They announced Monday they had raised $20 million to focus on ag-tech firms.

“You’d certainly rather have an independent Monsanto, but the value of Monsanto and the value of the people and the influence here in St. Louis is unlikely to change dramatically,” Lewis & Clark managing director Brian Hopcraft said Monday. “St. Louis is such a well-positioned geography and we have some great things happening here and it makes St. Louis stand out on ag-tech.”

The Kauffman Center’s Kurtz, however, said it was a legitimate question whether the loss of Monsanto’s headquarters might slow the attraction of experienced talent here.

On the other hand, experienced Monsanto employees now may take a risk and start or join a young company. “I think St. Louis is one of the best resourced towns for helping entrepreneurs and those who are interested in pursuing entrepreneurship,” Kurtz said.

Our coverage of Bayer's proposed takeover of Monsanto

The companies confirmed the $66 billion deal on Wednesday, Sept. 14.

Benson Hill Biosystems is looking to expand and interested in occupying a 40,000 square-foot expansion of the Creve Coeur plant science incubator.

A timeline of Monsanto's evolution

Over the course of its 115-year history, Monsanto has continually reinvented itself through technology and business mergers, marketing product…

The saving grace for St. Louis in the Monsanto sale

Connor Gorman (left) with SynShark talks with Mark Russell from Adjuvants Plus as people mingle at the eighth annual Ag Innovation Showcase in an area where early stage ag startups area show off their technology and ideas to potential investors and partners on Tuesday, Sept. 13, 2016. Photo By David Carson, dcarson@post-dispatch.com 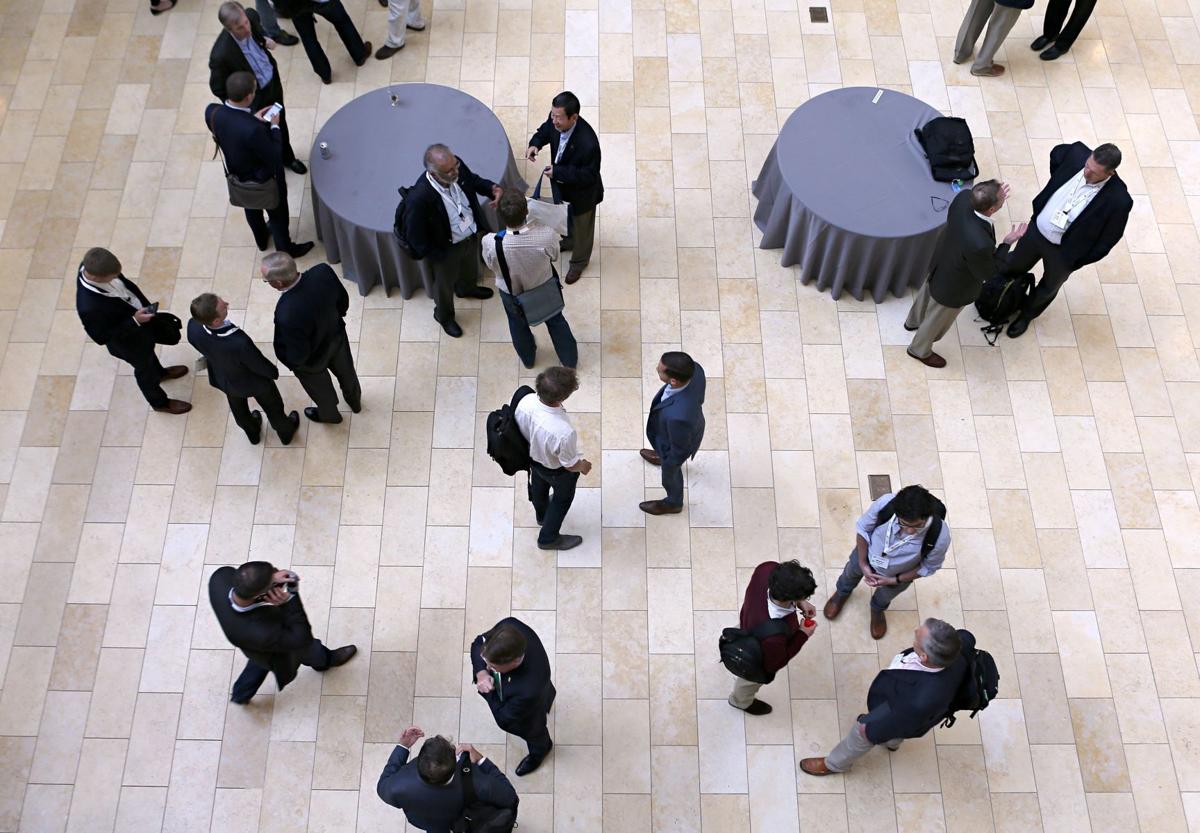 People mingle at the eighth annual Ag Innovation Showcase in an area where early stage ag startups show off their technology and ideas to potential investors and partners on Tuesday, Sept. 13, 2016. Photo By David Carson, dcarson@post-dispatch.com