Since 2014, an underground fire has smoldered in a coal mine about 60 miles northeast of St. Louis, eating away at the coal seams of the once-productive Deer Run Mine and also at the vitality of the towns above.

Since the mine fully halted operations in late 2015, Bryan Sullivan, mayor of nearby Hillsboro, Ill., says the housing market has slumped and that businesses, such as the local Ford dealership, have closed their doors, creating a void that he doesn’t see getting filled anytime soon.

“It’s had a huge negative impact on us here locally — loss of 150-plus good-paying jobs here in this area and all of the ancillary business that went with it,” Sullivan said.

He says the community held out hope that the mine could resume activity, as the company stopped short of sealing it for good and floated the possibility of expanding operations to unaffected areas. But that hope, unlike the fire, has now been extinguished, after the mine’s operator, St. Louis-based Foresight Energy, indicated in a Securities and Exchange Commission filing this month that it aims to permanently close the mine and terminate its lease for mineral rights at the site.

Though the filing states that March 2015 is when “the last coal was mined and removed under the terms of the lease,” Foresight signaled as recently as January that it was only moving to partially seal the mine. The fire dealt the company a $42.7 million setback in 2017, suffered amid total losses of $215 million on the year. With Deer Run now facing permanent closure, it projects that the losses of mineral reserves, machinery and other assets will amount to a hit of between $134 million and $172 million, according to the filing.

The pain, though, extends beyond the company, as residents and local officials in Hillsboro and Montgomery County can attest. They point out that spillover effects of the mine closure amount to more than just lost income. It also includes the loss of city and county revenue from taxes and royalties tied to mining.

The county’s annual operating budget, for instance, has dwindled from $7.4 million when the mine was operational to $5.8 million today, said Megan Beeler, vice chairman of Montgomery County government and chairman of its finance committee. The mine, she said, represented the single largest revenue source, once generating $250,000 to $300,000 per month.

“We’ve already gone through the tough adjustment of losing that revenue and having to live without it,” Beeler said. “We have trimmed everywhere we possibly could.”

That has meant putting off road projects and implementing cutbacks for services like animal control and recycling programs, she says.

In the future, though, Beeler braces for further repercussions, with the loss of jobs exerting “a rippling impact on our population.” Fewer residents will jeopardize future state and federal funding given to local government based on population data gathered in the next census. A disproportional strain could face Montgomery County, which is on pace to fall below the 30,000-resident mark — a threshold Beeler says is important for funding options.

“Rural counties bear this burden pretty harshly,” Beeler said. “Rural counties as a whole deal with this when you have a limited economic base and a smaller population, but yet are still mandated to provide certain services and certain duties and responsibilities.”

Despite the crunch that the county has seen in recent years, Beeler says its budget is structured so that basic operations do not rely on mining revenue. That source of money may not re-emerge, given the dimming prospects for coal as an energy source in the U.S.

And, as Illinois data show, any rebounds in coal production don’t guarantee that jobs will follow, hand in hand — especially in an industry where automation has, for decades, eroded employment more aggressively than any perceived regulatory “war” on coal. Last year, for instance, coal production in the state was up 10 percent over 2016, according to Phil Gonet, president of the Illinois Coal Association. Employment, though, actually decreased by about 200 workers — to about 3,400 overall — with two mines closing down.

But Gonet believes that Illinois Basin coal can stay competitive, thanks to the highly productive longwall mines throughout the region.

“I think we’re still well poised for the market because our producers are very productive,” Gonet said. “In a shrinking marketplace, the low-cost producer is going to prevail.”

Even so, local leaders like Beeler say diversification of the Southern Illinois economy is essential. Montgomery County, though, is bound to coal in more ways than one. Another prominent employer there is the coal-fired Coffeen Power Station, owned by Dynegy. The utility’s fleet of coal generation in downstate Illinois faces uncertainty, with 20 percent shutting down in the last couple years, and another 30 percent expected to be retired within three years, according to an October statement from the company.

Those plants slated for retirements have not been specified, but Beeler says Montgomery County is already “looking at what (it) can do post-coal.”

“We’re learning the same hard lesson: You don’t put all your eggs in the energy basket,” Beeler said. “The energy industry is fickle, and when those are your largest employers and also your largest property taxpayers, it’s difficult for a rural county to overcome any type of loss.”

She said that the county has had different workforce development and retraining initiatives in place for the last six years — an interval that seems to have gone by quickly, given the pace of change.

“In a nutshell, we need to train our people for a post-coal economy,” Beeler says. “What we didn’t realize is how quickly we’d be there.”

Foresight's CEO is among the 30 top-paid in St. Louis

Mnuchin says will leave next U.S. administration a "bazooka" after clawback of Fed loan funds 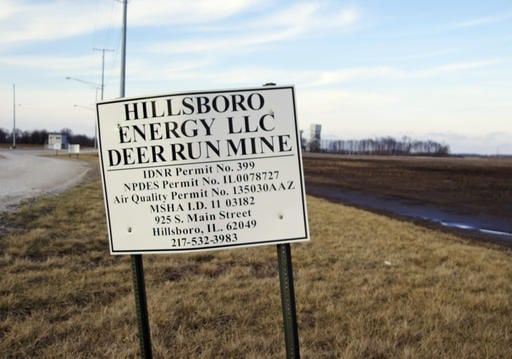 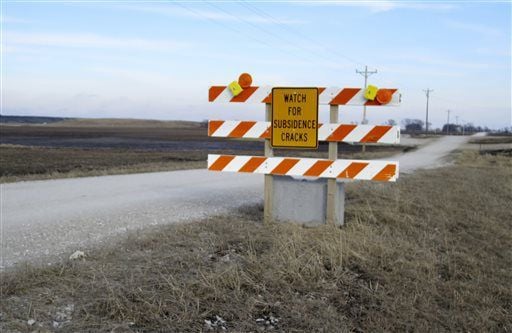 In this Feb. 5, 2016 photo, a traffic sign near the Deer Run coal mine near Hillsboro in southern Illinois warns motorists to be aware of cracks in the road caused by settling of the ground from mining, a process known as subsidence. Mine owner Foresight Energy is asking state regulators to approve a 7,731-acre expansion that is opposed by some residents who fear it could jeopardize public health and cause environmental damage. A smoldering underground fire has led the company to idle its operations (AP Photo/Alan Scher Zagier)