In groundbreaking, NGA promises to build St. Louis businesses, too
0 comments
Share this
{{featured_button_text}}
1 of 3 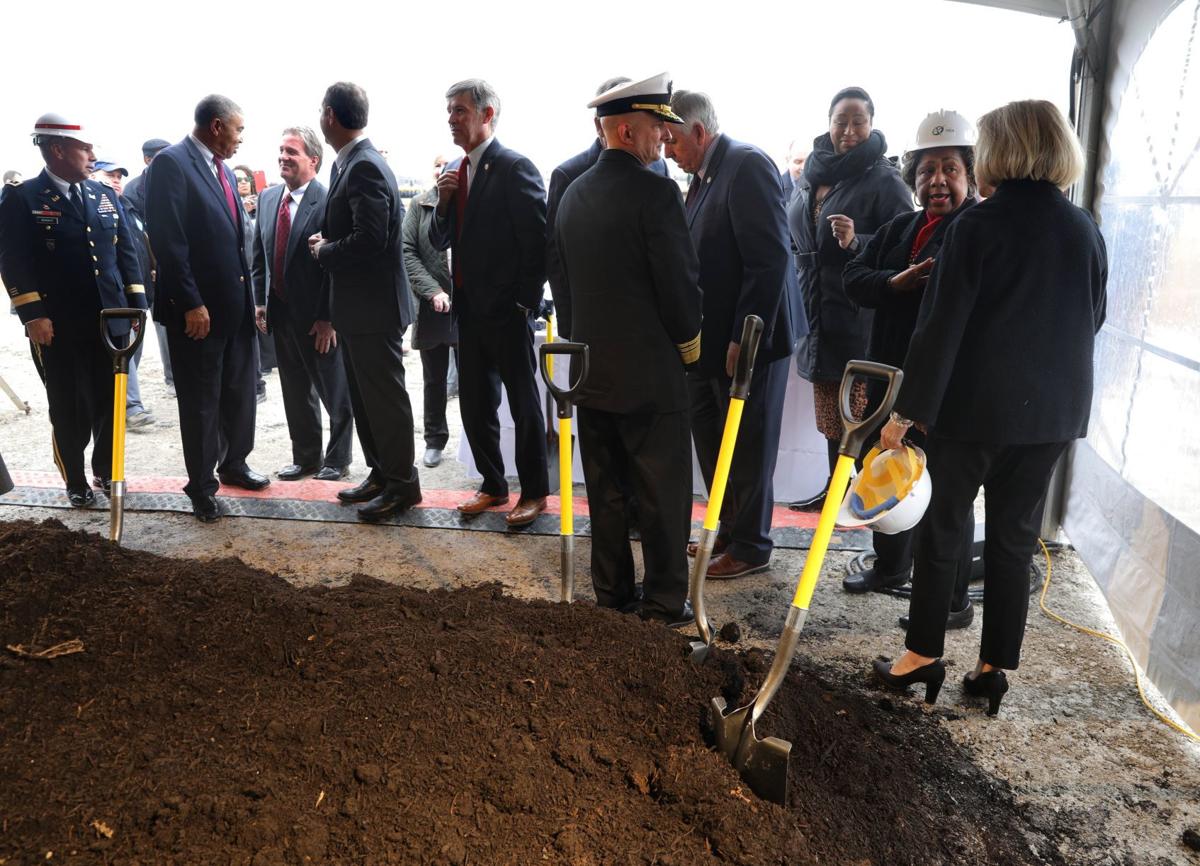 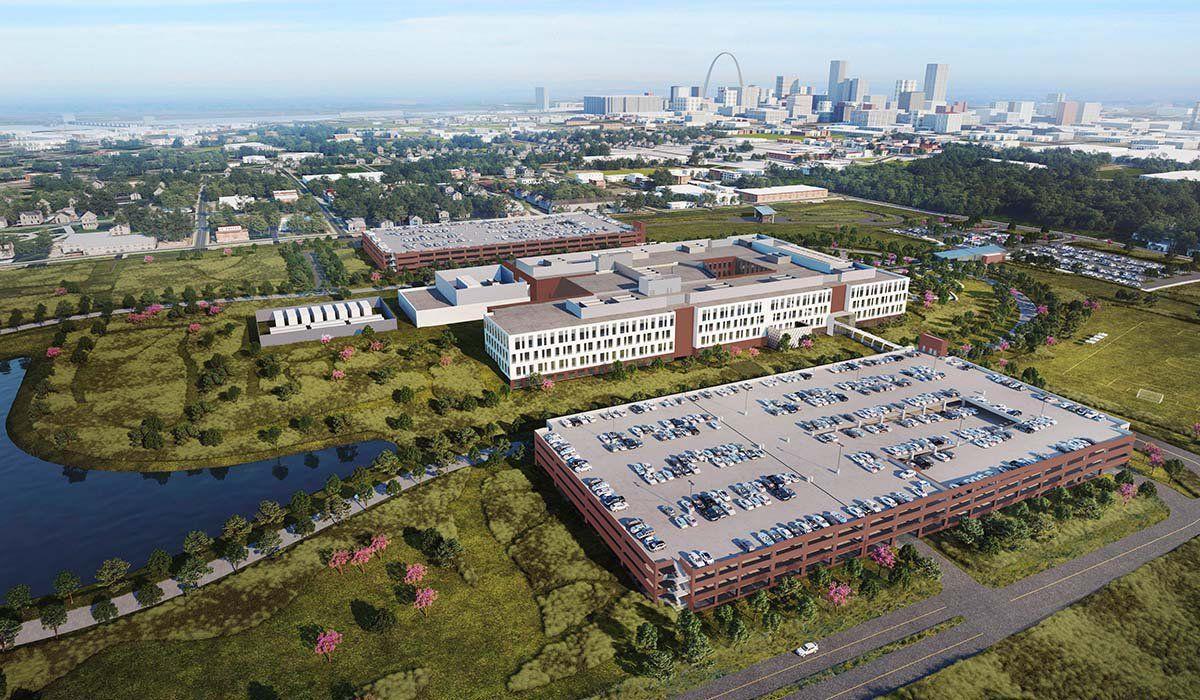 Aerial view of the Next NGA West campus concept from the northwest. The U.S. Army Corps of Engineers, which is overseeing the $1.7 billion NGA project, released renderings of the planned north St. Louis campus from the joint venture led by Rock Hill-based McCarthy Building Companies and Washington-based HITT Contracting. The joint venture won the $712 million construction contract last month. Outfitting the facility and other costs brings the total cost up to $1.7 billion. (Rendering courtesy of McCarthy-HITT and the U.S. Army Corps of Engineers) 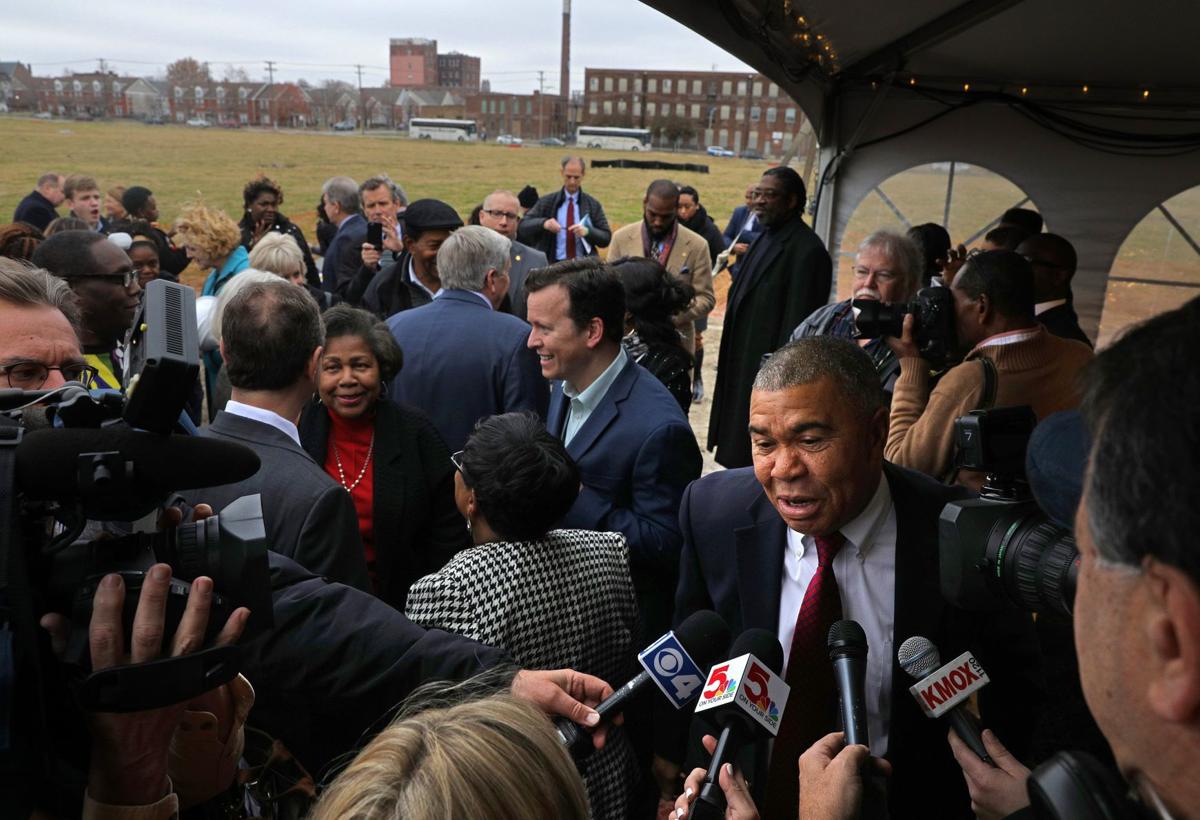 ST. LOUIS — Four years ago, houses still dotted the streets near Cass and Jefferson avenues, the remnants of a neighborhood that had seen residents leave and investment dwindle for decades.

On Tuesday, top federal intelligence and military officials gathered here, now a cleared 97-acre site, and promised to pour $1.7 billion into a new campus for the National Geospatial-Intelligence Agency, hopeful that the 3,000-plus NGA jobs will draw even more private investment to the near north side.

It's the largest project north St. Louis has seen in generations, a massive federal campus in the heart of the region's urban core. When it opens in 2025, it will serve as the new western headquarters for a high-tech intelligence agency that has quietly worked on the south Mississippi Riverfront for decades.

Intelligence officials see the opportunity for innovative design that allows them to better collaborate with the private sector, developing new ways to analyze mapping data.

Acting Director of National Intelligence Joseph Maguire told the gathering that the new facility would be the first in the intelligence community with unclassified office space specifically designated for producing analysis based on unclassified imagery and intelligence.

"In these spaces we will increase the unclassified information and intelligence that we produce while reducing the amount of time that it takes to do it," Maguire said. "Furthermore, we are absolutely committed to sharing that intelligence, expanding our partnerships in the private sector, state and local governments and also with our partners and allies abroad."

Those high hopes were on full display as a parade of politicians made their way to the microphone Tuesday before ceremoniously turning the first shovel of dirt.

The ceremony marked a victory for the city on a project many saw as a long shot in 2014, when the NGA first said publicly it needed to find a new home for its 3,000 St. Louis employees — its largest presence outside Washington.

Blunt applauded the state for finding the money to assemble the land in north St. Louis; St. Clair County offered NGA flat open ground next to Scott Air Force Base. "We certainly wouldn't have wanted to be there today instead of here," Blunt said. "Congressman Clay and I might not have been invited to be there today."

St. Louis and the state invested in excess of $114 million to acquire and prepare the land in the St. Louis Place neighborhood — debt that will be repaid with state and local income taxes from NGA employees.

The project has been in the back of the mind of area officials for a decade. Blunt mentioned that, 10 years ago, he told former Mayor Francis Slay, whose administration won the 2016 commitment from NGA to stay in the city, that the NGA would be looking for a new facility soon.

Clay, long an advocate for the project, thanked city officials for their work assembling property. He was the only one to thank controversial developer Paul McKee "for having the vision to assemble the 97 acres needed to make this site viable and allow the city of St. Louis to complete this project."

McKee had assembled over half the site and responded to a blind request for proposals that later turned out to be the NGA. He had bought some property from the city's land bank, and to fully assemble the site, the city had to buy that property back from the developer and his lender the Bank of Washington, who wanted more than they had paid for it. The negotiations nearly derailed the project. And last year, after the city canceled McKee's development rights in the area, lawsuits against the city from the bank, represented by McKee's lawyers, almost threw a wrench into the whole NGA project.

But Clay also extended an olive branch to City Hall, thanking Krewson and the head of the city's economic development office, Otis Williams.

Krewson, too, made sure to note efforts Williams and his staff have put into assembling the NGA site and clearing and cleaning the land for the handoff to the federal government.

"Literally we would not be here today had they not done the work, the hard work, to deliver this site," she said.

This family was forced to move for NGA. Their new home caught fire last week

Though he retired as director of the National Geospatial-Intelligence agency a year ago, Cardillo still visits St. Louis regularly and is part of the efforts building links between the NGA and the region's workforce and educational system.

There's a strong emphasis on doing a better job of making sure Black St. Louisans share in the growth.

'Placing a bet on St. Louis,' NGA prepares to allow more access for tech firms it hopes will cluster here

Troves of public documents recently obtained by the Post-Dispatch, and interviews, tell of a development deal that nearly came apart, but ended up keeping 3,000 jobs in the city.

The land transfer is culmination of years of work by the city's economic development agency.

Foreign governments, hazardous materials would be restricted. But liquor stores and fast-food would also get extra scrutiny.

Aerial view of the Next NGA West campus concept from the northwest. The U.S. Army Corps of Engineers, which is overseeing the $1.7 billion NGA project, released renderings of the planned north St. Louis campus from the joint venture led by Rock Hill-based McCarthy Building Companies and Washington-based HITT Contracting. The joint venture won the $712 million construction contract last month. Outfitting the facility and other costs brings the total cost up to $1.7 billion. (Rendering courtesy of McCarthy-HITT and the U.S. Army Corps of Engineers)