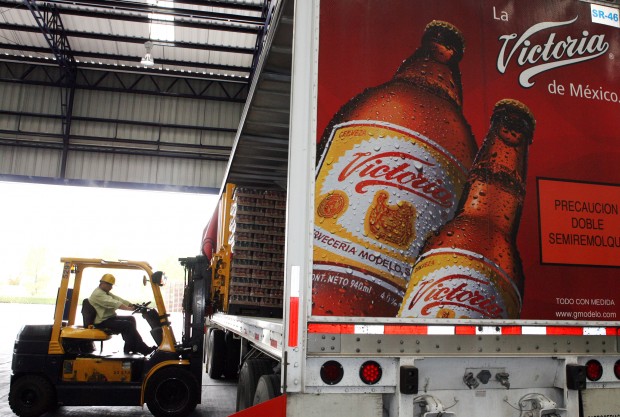 Beer is loaded onto a trailer at the Grupo Modelo SAB beer factory in the state of Zacatecas, Mexico, on Aug. 22, 2007. St. Louis-based Anheuser-Busch owns 50 percent of Modelo, and is reportedly considering expanding its partnership with the Mexican brewer in response to an attempt by InBev to purchase A-B. Photographer: Susana Gonzalez/Bloomberg News. 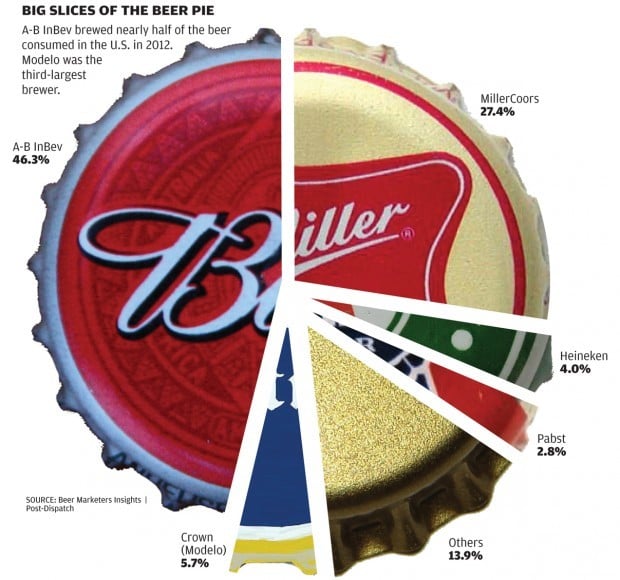 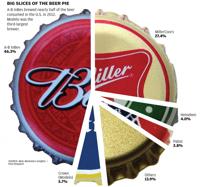 The bid by the world’s biggest brewer to buy one of its largest rivals hit a roadblock in Washington Thursday, though some industry-watchers remain optimistic the deal will ultimately bust through.

The U.S. Department of Justice filed suit seeking to block Anheuser-Busch InBev’s proposed $20 billion purchase of Mexican brewer Grupo Modelo, arguing that the merger of the nation’s No. 1 and No. 3 biggest beer-sellers would be bad for beer-drinkers nationwide.

In its 27-page lawsuit, the Justice Department argues that the merger would give the beer giant undue sway over prices. By eliminating a major competitor, A-B InBev — and rival MillerCoors — would be free to hike the cost of a six-pack without fear of losing market share.

“We believe this acquisition is bad for consumers,” Assistant Attorney General Bill Baer said. “It will lessen competition in the beer market and it will result in consumers paying more for beer and having less choice.”

The deal, which would give A-B InBev the half of Modelo that it does not already own, was widely hailed on Wall Street and around the beer industry when it was announced in late June.

It was a logical move for A-B InBev, which has grown into a global behemoth through mergers and acquisitions — most notably its 2008 takeover of St. Louis-based Anheuser-Busch — and then driven huge profits through efficiency and global marketing of its biggest brands.

But it also raised antitrust red flags from the start.

Adding Modelo — whose flagship Corona Extra is the most popular import beer in the U.S. — to A-B InBev’s portfolio would give the big brewer control of 46 percent of the country’s $80 billion beer market by dollar value, and 52 percent by volume. In some key markets such as Texas and Florida, those numbers are even higher.

To pre-empt those concerns, A-B InBev structured the deal to sell Modelo in the U.S. through a third party — New York-based wine producer and beer importer Constellation Brands. They set up a 10-year supply agreement, with price controls in place, and promised that U.S. beer drinkers would see no difference after the merger.

“We believe this transaction brings no change to the U.S. market,” A-B InBev Chief Executive Carlos Brito told analysts when the deal was announced June 29.

But the Justice Department sees it differently.

In their lawsuit, regulators argued that Constellation — which, as a middleman, has no production facilities or brands of its own — would have no incentive to keep prices down to sell more volume. They described the arrangement between Constellation and A-B InBev as merely a “facade of competition.”

Regulators reached that point after months of investigation. Lawyers for the Justice Department, which along with the Federal Trade Commission reviews large mergers, talked with A-B InBev, Modelo and Constellation as well as their competitors, beer wholesalers, craft brewers and others around the industry. They also held what Baer called “frank and candid” discussions with A-B InBev about other arrangements that might ease anti-trust concerns.

“At the end of the day we were too far apart,” Baer said.

So after notifying the company Thursday morning, the Justice Department filed its lawsuit in federal court in Washington.

What happens next, no one knows, though all sides agreed that plans to close the deal by March are likely on hold.

The Justice Department is not proposing any specific remedy but rather seeking an injunction that would block the deal outright. Still, Baer left open the door to a negotiated settlement.

“Obviously the parties are free to propose fixes that will avoid the need for an injunction,” he said. “But at this point what we are asking the district court to do is enjoin the transaction.”

For its part, A-B InBev made no move toward negotiation, at least publicly. The brewer issued a statement vowing to push ahead despite the suit, which it called “inconsistent with the law, the facts and the reality of the marketplace.”

“We remain confident in our position, and we intend to vigorously contest the DOJ’s action in federal court,” A-B InBev’s statement read. The company declined to comment further.

The brewer will be facing a Justice Department that, under President Barack Obama, has been more active in antitrust litigation, particularly against horizontal mergers of the kind A-B InBev is proposing.

And a Justice Department lawsuit successfully blocked H&R Block’s plans to buy rival TaxAct for $287.5 million, a move that would have created a duopoly in tax preparation.

When it has concerns, the government often tries to reach a settlement with concessions before going to court, said Sandeep Vaheesan, special counsel with the Washington-based American Antitrust Institute, a nonprofit that supports the Justice Department’s lawsuit.

“Litigation is very rare,” he said. “I do think the Department of Justice has a very strong case.”

Still, some analysts and industry-watchers said they remain optimistic that the two sides will work something out.

“We still believe a deal will happen, but completion is likely to be delayed beyond the first quarter of 2013 and may require concessions,” wrote UBS analyst Melissa Earlam in a note, according to Bloomberg News. “We don’t assume this is a dealbreaker.”

Indeed, Bloomberg, citing unnamed sources, reported late Thursday that talks are continuing between the Justice Department and A-B InBev, even as their lawyers head to court.

The trouble, said Tom Pirko, a consultant with California-based Bevmark who’s worked for both regulators and brewers on past beer-industry mergers, is that there’s no obvious fix here. Typical antitrust remedies like selling off assets or brands won’t do much to ease concerns about price.

“Everything’s negotiable. Even when you file a lawsuit,” he said. “But I don’t think they know how to solve the problem.”

Still, A-B InBev has a lot at stake, and not just in the U.S.

Modelo is by far the biggest player in Mexico’s $6 billion beer market, and that alone makes it a juicy prize. But its flagship brand — Corona Extra — is also one of the world’s most popular import labels, and A-B InBev has big plans to place it alongside Budweiser and Stella Artois as one of the global brands it is selling to rising middle-class consumers around the world.

That potential, and A-B InBev’s long track record of successful mergers, had people who watch the company predicting they won’t let go of Modelo lightly.

“They tend to do what it takes to get deals done,” said Harry Schuhmacher, publisher of Beer Business Daily. “You’ve got to think they’re going to fight for it hard.”

But right now, to keep Modelo, it looks like they’re going to have to fight the U.S. government.

• In June, A-B InBev announced a $20 billion agreement to buy all of Mexican brewer Grupo Modelo, giving it control of the popular Corona Extra brand and 46 percent of the U.S. beer market, which has $80 billion in annual sales.

• To address antitrust concerns, A-B signed a 10-year deal by which Constellation Brands would import and sell Modelo's beers in the U.S., with some price controls.

• On Thursday, the Justice Department sued to block the deal, calling the Constellation agreement a "facade of competition" that would give A-B InBev too much control over beer pricing. A-B InBev pledged to fight the lawsuit.

Bud-Justice Dept. square-off is all about pricing

Can the King of Beers save the Modelo deal?

A-B InBev's options include fighting in court, negotiating a settlement or walking away

A-B, DOJ filed a request in court asking litigation to be stayed until March 19.

A-B says "substantial progress" has been made in talks with the DOJ.

Beer is loaded onto a trailer at the Grupo Modelo SAB beer factory in the state of Zacatecas, Mexico, on Aug. 22, 2007. St. Louis-based Anheuser-Busch owns 50 percent of Modelo, and is reportedly considering expanding its partnership with the Mexican brewer in response to an attempt by InBev to purchase A-B. Photographer: Susana Gonzalez/Bloomberg News.