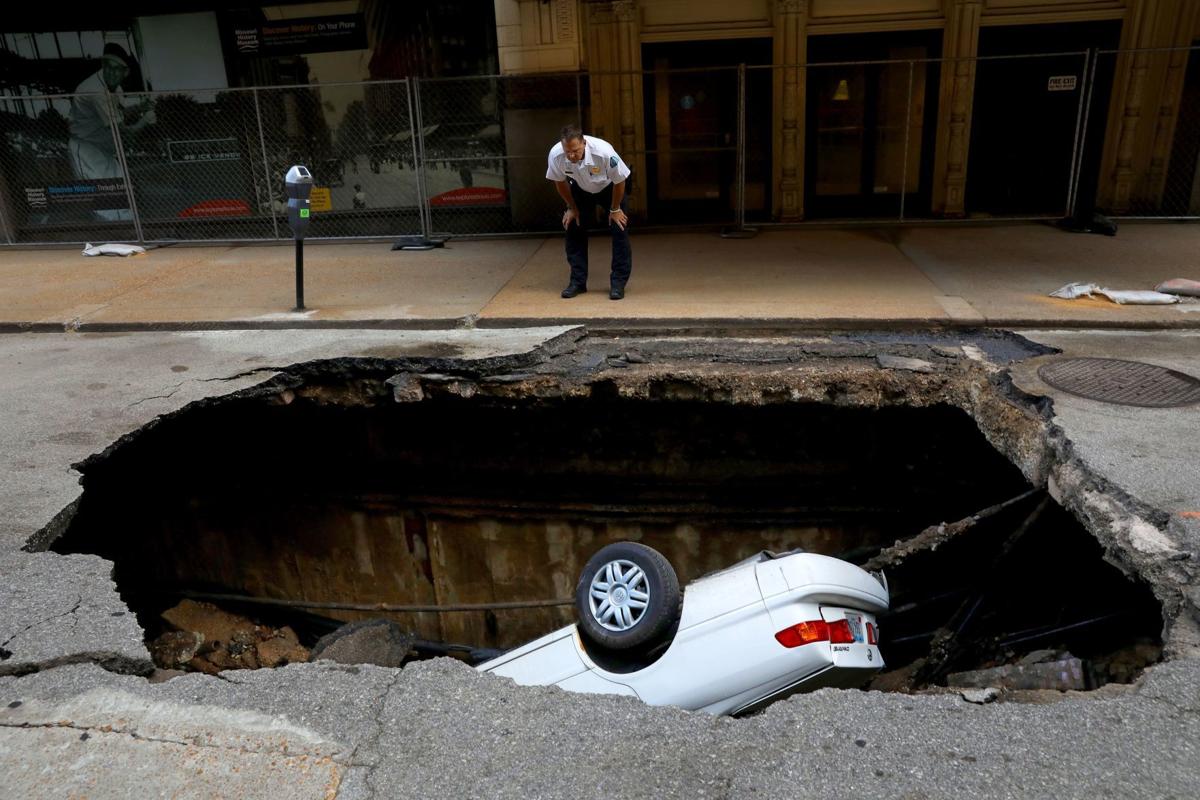 FILE PHOTO: A St. Louis police officer looks over a large hole in 6th Street on Thursday, June 29, 2017, that swallowed a Toyota Camry between Olive and Locust Streets. A water main was damaged. Photo by Christian Gooden, cgooden@post-dispatch.com 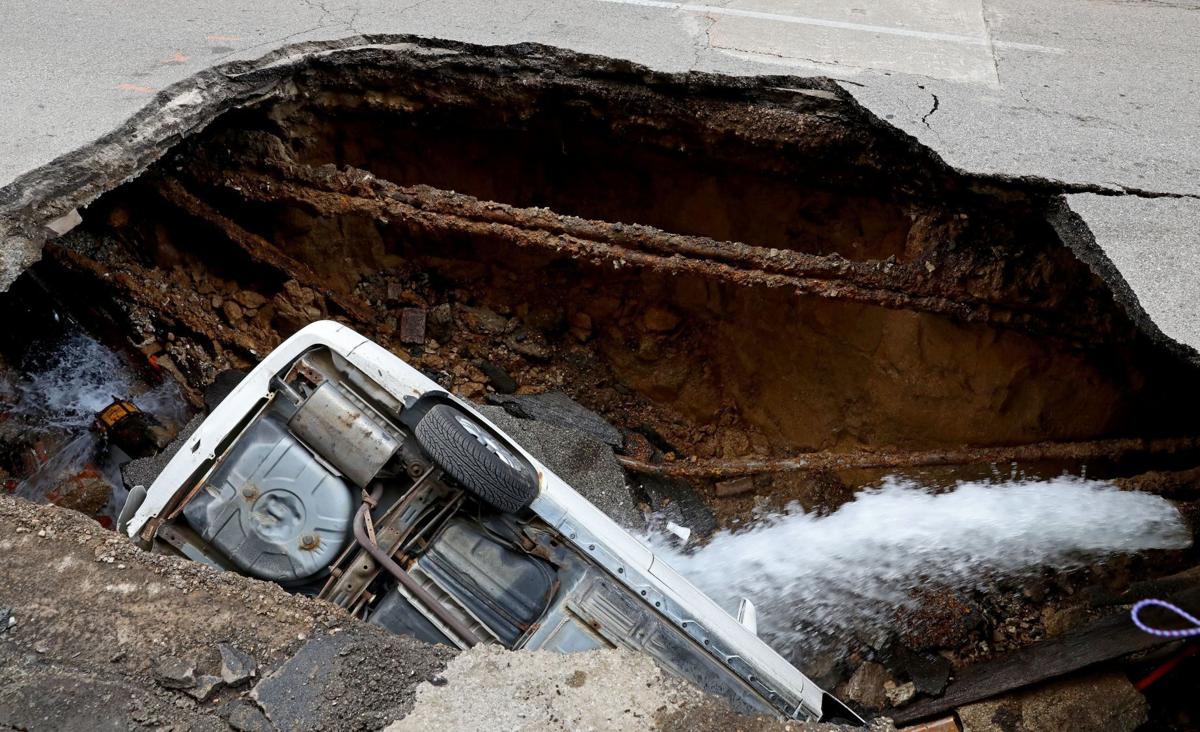 Two years ago this week, an eventful eight-month period began on a single block of downtown St. Louis — one highlighted by ruptured water mains spilling millions of gallons of water and a sinkhole swallowing a Toyota Camry when a sizable chunk of Sixth Street caved in.

The cavernous void that engulfed the car — 20 feet deep and 8 to 10 feet across — raised questions about why there wasn’t soil and other material there to support the roadway , as one would expect.

While some speculative bystanders chalked it up at the time as a freak accident or fluke of geology, others thought the crater was triggered by erosion from the water main that broke just around the corner, months before.

“I know where a lot of the dirt was,” Amos Harris, a developer for the neighboring Railway Exchange Building, told the Post-Dispatch when the sinkhole emerged in June 2017. “It was in our basement.”

That assessment is echoed in a lawsuit filed by the building’s owners in St. Louis Circuit Court last week.

The suit, which also includes the City of St. Louis as a plaintiff, places the blame on Ameren through one of the electric utility’s subcontractors, INTREN. It alleges that they “negligently caused the rupture” of a water main while working in the area in November 2016, setting in motion a destructive chain of events that have cost millions for the property owner and the city.

In total, the suit says that $26 million in remediation and repair costs have been incurred so far at the Railway Exchange Building and the Seventh Street Garage across the street. Meanwhile, it states that the city has faced its own costs and lost 15 million gallons of water in the two allegedly linked episodes — a quantity it says carries about $2.7 million in value. The lawsuit seeks financial relief deemed “just and proper under the circumstances.”

Much of the eight-page lawsuit maps out the chronology — and the close proximity — of the events. It says that on Nov. 13, 2016, INTREN employees ruptured a water main while “digging a trench for a new conduit for electric service cables on Locust Street, between Sixth and Seventh Street.” An estimated 9 million gallons of water were released over the course of several hours.

“This prolonged release of water, at high pressure, washed away a great deal of subsurface soil in the surrounding area. Much of the soil, liquefied into sludge by the escaping water, entered the basements of the buildings owned by (St. Louis Railway, LP),” the lawsuit says, adding that a section of Locust Street collapsed from erosion underneath.

But the filing says that “unbeknownst” to St. Louis Railway, erosion from the rupture created “huge voids beneath the asphalt-topped concrete of the streets surrounding the (Railway Exchange Building). As a result of these voids, further ruptures of water mains in the vicinity of the November 2016 Rupture were inevitable.”

That came to fruition, the lawsuit states, in June 2017, when a second water main break occurred “as a direct result” of the earlier rupture. The failure of that eight-inch main allegedly released 6 million gallons of water and “caused additional flooding and other damage to the buildings owned” by St. Louis Railway.

Perhaps most strikingly, the main break “manifested itself” through the sudden formation of the car-eating sinkhole, the suit says. Workers found that an approximately 50-foot-long stretch of the street had been hollowed out underground, and was not supported by soil.

Harris told the Post-Dispatch last year that the first incident left 6 to 9 feet of water in the basement of the 1.2 million-square-foot Railway Exchange Building, and 2 to 3 feet of water got into the basement when the sinkhole opened. Developers are aiming to convert the vacant building — which previously housed a Macy’s department store on the lower floors until 2013 — into space for offices, retail and apartments.

The lawsuit says that work has been “significantly delayed” by damage from the broken water mains.

Ameren declined to comment on the matter. After the sinkhole’s appearance last year, an Ameren spokesman confirmed to the Post-Dispatch that a contractor dug a trench for a conduit the previous November, but denied that they ever hit a water line.

A court summons issued Nov. 2 requires that Ameren file a plea for the case within 30 days.

FILE PHOTO: A St. Louis police officer looks over a large hole in 6th Street on Thursday, June 29, 2017, that swallowed a Toyota Camry between Olive and Locust Streets. A water main was damaged. Photo by Christian Gooden, cgooden@post-dispatch.com