Regional leaders presented a $175 million plan to expand America’s Center downtown that they say is necessary to compete with nearby cities for big conventions and the thousands of people they bring to the St. Louis area’s hotel rooms and restaurants.

The project, announced Wednesday, would add 92,000 square feet of exhibit space along Cole Street and a 65,000-square-foot ballroom along Ninth Street as well as a new pavilion and green space on what is now a surface parking lot.

Instead, the fund used to service the debt issued in 1991 to finance the Dome at America’s Center — built for the National Football League Rams, which left in 2016 — will be used to service new, 40-year bonds issued for the America’s Center expansion. The Dome debt is set to be paid off in 2021. St. Louis and St. Louis County each contribute about $6 million a year to that fund through hotel taxes.

“This is a good deal for county taxpayers as the proposed revenue will be paid from out of town visitors who stay in our county hotels and motels,” Stenger said in a statement.

Though convention center upgrades have been talked about behind the scenes since the Rams left, Stenger had declined to commit to using the county’s share of hotel tax to help with upgrades, saying he was waiting to see a final plan.

At an event Tuesday announcing the plan, Ratcliffe thanked Stenger specifically for his “due diligence” in assessing the proposal and making a decision that could be seen as politically difficult.

“I want to tell you how much we appreciate the stand you’ve taken on this,” she said.

As for Krewson, she said America’s Center upgrades had been “on my urgent list for a year and a half.”

“Things don’t stop at that city-county line,” Krewson said. “And these big decisions are better made together.”

The expansion comes as some downtown restaurateurs and hoteliers complain that their businesses have taken a hit from fewer conventions. The CVC said last month that hotel room night bookings associated with America’s Center were down 30 percent year-to-date, to 230,554 from 327,578 in 2017.

Several big conventions, such as the O’Reilly Auto Parts and FIRST Robotics, did not return this year because they had outgrown America’s Center’s facilities. Ratcliffe said that some national associations, which book several years in advance, had removed St. Louis from consideration after the unrest that began in Ferguson in 2014, and that those decisions were starting to have an effect this year.

Ratcliffe has long argued that upgraded facilities were needed to compete for conventions in cities such as Nashville, Tenn., and Indianapolis, which have spent hundreds of millions of dollars in recent years to revamp their tourism infrastructure. She said getting the two regional leaders on board was key to the project’s success.

“It’s a big step in our region to have the county executive and the mayor involved in something like this,” Ratcliffe said in an interview Tuesday.

In the last year, two land purchases by the St. Louis Land Clearance for Redevelopment Authority hinted that a plan was in the works. The LCRA last year bought the parking garage just across Ninth Street from the northwest corner of America’s Center.

That garage will be demolished to make room for 92,000 square feet of new exhibit hall space. It will also allow 26 new loading docks to be added along Cole Street and let the convention center reorient the current 12 docks at an angle, so trucks don’t block traffic along the street.

“If we can’t get the freight in, it costs the clients money,” Ratcliffe said.

Plans also call for adding a wall with art and some greenery to beautify the Cole edge of the convention center. The front entrance along Washington Avenue would also be spruced up.

The new exhibit space will allow current exhibit halls to the south toward Washington to be turned into a 65,000-square-foot ballroom, more than double the size of the current one. The current ballroom, Ratcliffe said, is not large enough to be competitive as a signature convention center ballroom. It will remain, however, as an option for groups to use.

A new kitchen will be added to service the ballrooms, she said.

As America’s Center was built in phases over the decades, including avoiding a privately held parking garage on Seventh Street that it was never able to acquire, the layout posed logistical problems. Now, for instance, the kitchen is on a different level from the ballroom and servers must take a “circuitous route” through the convention center that’s the equivalent of a couple of city blocks.

“It’s hard to get the food to hold up when it has to be plated and travel this far,” Ratcliffe said. “It’s a great kitchen, but it’s not in the right location to serve the ballroom.”

Just to the west of the new ballroom and its glass entrance along Ninth , a surface parking lot the St. Louis economic development agency bought this summer would be turned into green space and a pavilion. That will provide space for outdoor events and beautify the rough western edge of the convention center, which is currently dominated by unattractive surface parking.

The surface lot just to the west of that, which the city agency bought as part of its transaction over the summer, would be held for future development, perhaps a parking garage and retail businesses, though details aren’t final.

Both the St. Louis Board of Aldermen and the St. Louis County Council will need to approve ordinances authorizing the new financing plan.

Ratcliffe said she hoped to begin construction on the exhibit space and loading docks by late next year, with the ballroom and green space to follow. To avoid disrupting events, the project will have to be built in phases. The goal is to wrap up by the end of 2021.

“The fact is that this building has a huge impact on the regional economy,” Ratcliffe said. “There’s a lot of economic activity that’s generated beyond the city.”

Also Wednesday, the board approved a $750,000 contract with Employment Connection as part of the Cure Violence initiative officials hope will prevent murders in the city's most violent neighborhoods.

Leaders at the St. Louis Convention and Visitors Commission warned that more delay would exacerbate a cash crunch at the tourism office.

The St. Louis Municipal Finance Corp., in charge of issuing the bonds, already punted on the project in early April.

New exhibit space would be added along Cole Street on the site of an existing parking garage a city economic development agency bought last year, freeing up space for a new ballroom double the size of the existing one in America's Center. Rendering courtesy of Convention and Visitors Commission 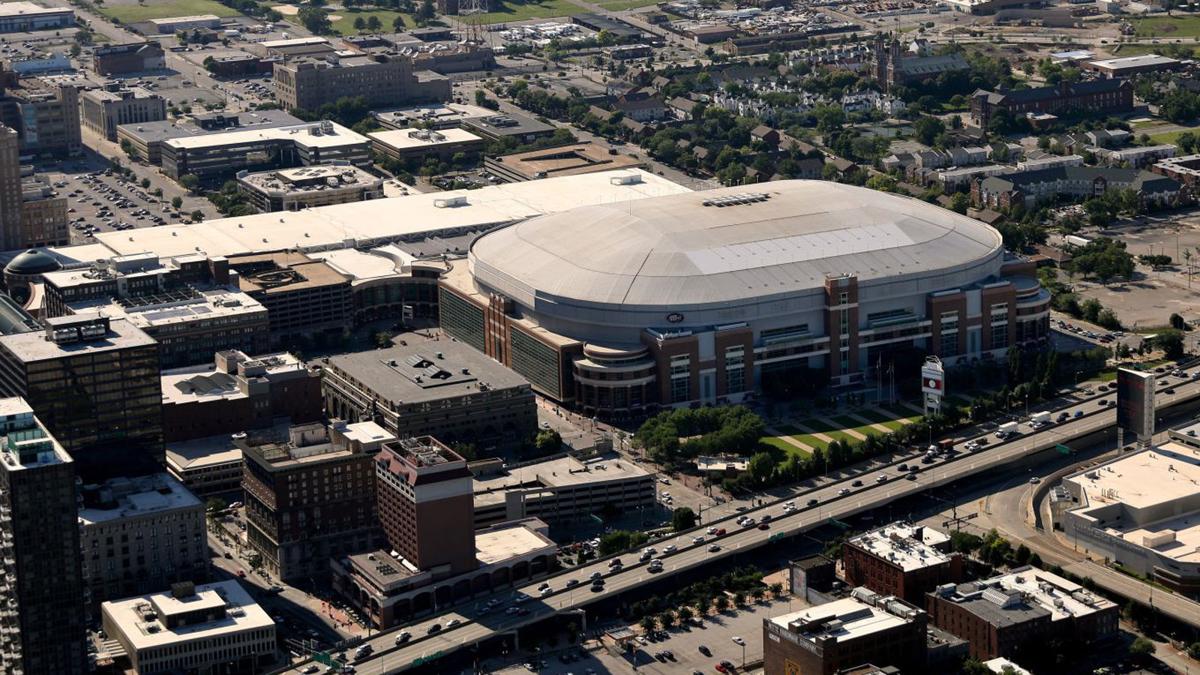 The Dome and convention center in St. Louis as seen on Tuesday, June 5, 2018. Photo by David Carson, dcarson@post-dispatch.com