The Angad Arts Hotel is on track to open by November, its developers and operators say, adding 146 hotel rooms to Grand Center and capping a five-year effort to rehabilitate the empty Missouri Theatre building.

The historic building was constructed as companion offices in 1920 to the former Missouri Theatre. The 12-story building has been vacant for nearly a decade, a missing tooth in the midtown arts district that boasts the Fox Theatre, Powell Hall and the Contemporary Art Museum of St. Louis among its attractions. The Angad Arts hotel already is accepting reservations for the beginning of November.

Its return to use will be slightly less ambitious than what was announced more than three years ago. Bull Moose Industries, a Chesterfield-based metal tube manufacturer largely for the construction industry, is no longer planning to move its headquarters to the building. Bull Moose’s parent company, British steel firm Caparo Group, shares an ownership stake in the building with local developer and Lawrence Group CEO Steve Smith.

The initial plan for Bull Moose and the hotel had been unveiled with fanfare, drawing former Gov. Jay Nixon and former St. Louis Mayor Francis Slay to ribbon cuttings. Caparo Group founder Lord Swraj Paul, who co-developed the building with Smith, was here as recently as August 2017 to visit the building named in honor of his late son and former Caparo Group CEO Angad Paul.

A spokesman for Bull Moose said the company, which had initially planned to move 75 of its corporate employees to the office, had outgrown the space and would remain in Chesterfield. Caparo Group is in discussions with potential tenants to fill the 25,000 square feet of office space, the company said.

“The space in the arts district is fantastic,” the company said in a statement. “While we wish it would still accommodate our near 100 employees, it will be a great space for the right-sized company.”

Work is well underway, though, on the $65 million project to transform the structure into a unique hotel offering, featuring a ground-floor restaurant affiliated with a celebrity chef, Grand Tavern by David Burke.

Employees from general contractor Paric Corp. were busy this week working on the lobby — which will be on the top floor — and finishing the ground floor. Most of the room floors are already finished, and feature work from local artists in rooms offering four color schemes that guests can choose to fit their mood.

An art gallery will greet patrons as they enter the building, offering local art for sale. Take the elevator to the lobby where a 14-foot-tall “chameleon lamp,” a 360-degree video art installation, will run images curated by local video artist Zlatko Cosic. A rooftop bar and lounge, the Angad Rainbow Terrace, will be open to the public and serve small plates in addition to drinks.

Of its 146 rooms, 25 of them will be extended stay with kitchenettes. Event spaces on the top floor as well as a 3,000 square-foot ballroom for dinners and receptions are under construction.

Operating the hotel is hospitality industry veteran David Miskit, who has managed and opened a number of hotels in New York, Miami, and most recently, the Ambassador East hotel (briefly rebranded as Public Hotel) in Chicago. He counts the famed New York institutions Studio 54 and Palladium as early gigs on his résumé.

“The goal is to become the ultimate concierge for all these venues here,” Miskit said of the surrounding performance halls and museums during a Tuesday tour of the under-construction hotel.

The food and beverage service throughout the hotel will be run by restaurant operator ESquared Hospitality and Burke, who have already collaborated on two concepts: Tavern62 by David Burke in New York City and BLT Prime at the Trump International Hotel in Washington, D.C.

Miskit said the goal was to offer a hotel restaurant “as good as any other restaurant.” Though St. Louis has a good food scene, “the hotels got a bit stuck in time,” he said.

For developer Smith, the project marks a long journey to reinvigorate the historic structure, a specialty for the prolific developer known for the rehabs of the Park Pacific and Security buildings downtown. He’s also no stranger to boutique hotel development, having completed the nearby Hotel Ignacio down Lindell Boulevard in 2011.

He bought the Missouri Theatre in 2013 for $3.2 million from the arts district’s nonprofit development group, Grand Center Inc.

“To complement our world-class cultural institutions, we’ll finally have a gathering place for the people who visit or call it home,” Smith said in a statement.

There are hundreds of applications awaiting review at the state office that reviews them, stymieing developers. 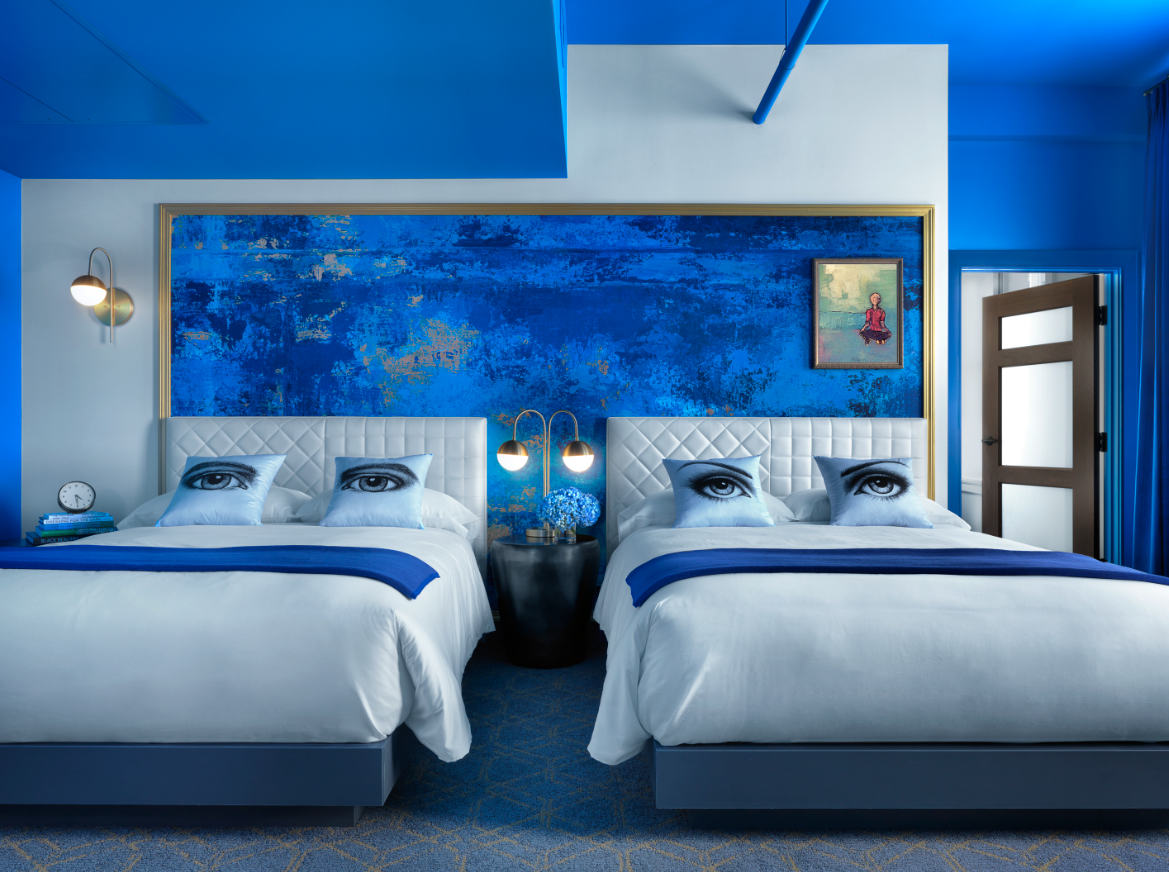 A rendering of the "Chameleon Lounge" in the under-construction Angad Arts Hotel in Grand Center. (Handout) 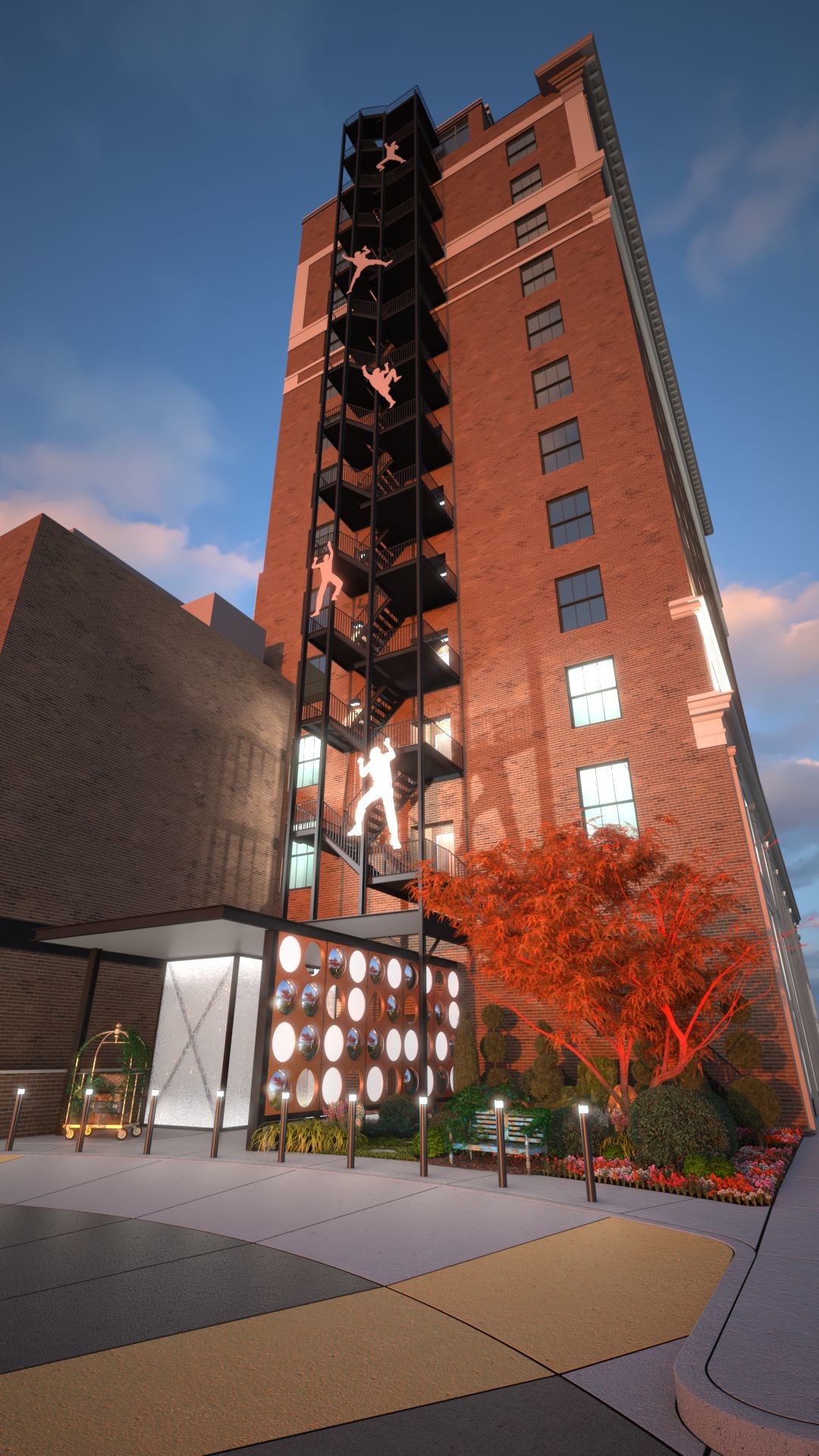 The rendering of the art planned for the fire escape on the Angad Arts Hotel, as viewed from what will be the main entrance east of North Grand Boulevard along Samuel Shepard Drive. (Handout)