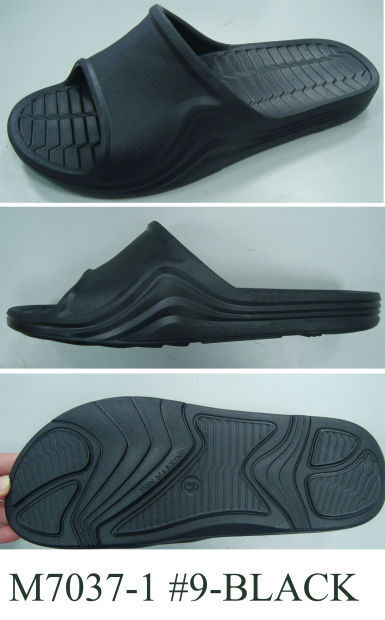 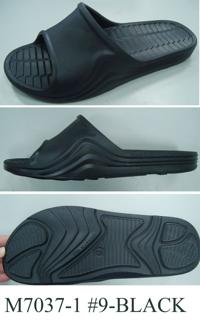 This is a prototype of the soccer slide Elan Polo plans to make in the U.S. for Walmart. 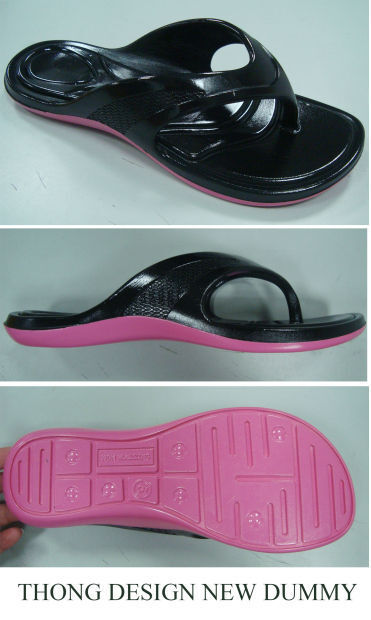 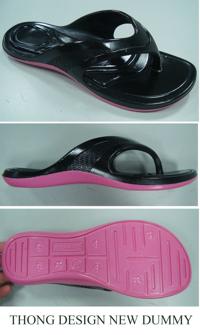 This is a prototype of one of the women's thongs that Elan Polo plans to make in the U.S. for Walmart.

The fine print on cheap flip flops — like a lot of other low-priced goods sold at big box stores — often says “Made in China.”

But a local company has plans to make flip flops, a garden clog and a soccer sandal that would instead bear a “Made in the U.S.A.” label. Priced from $7 to $12 a pair, the shoes are expected to begin hitting Walmart stores next fall and into spring 2015.

It’s been decades since the U.S. shoe industry sent most its manufacturing work abroad. Missouri, once a major center for footwear production, has also seen that part of its economy mostly disappear. But a handful of shoe companies still call the St. Louis region home.

One of them is Elan Polo International, a $300 million company whose corporate headquarters is tucked away in an Overland office park, where about 100 people design shoes and oversee global production and distribution. An importer since its inception in 1976, the company’s biggest customers includes Walmart and Target among its big customers. It supplies the shoes sold under the private labels of both major retailers.

Executives at Elan Polo never gave much serious thought to producing shoes in the U.S. After all, the economics didn’t seem to make it viable, with labor much cheaper in countries such as China. (Today, about 99 percent of footwear sold in the U.S. is made overseas, according to the Footwear Distributors and Retailers of America.)

But that quickly began to change last year when Walmart began challenging its suppliers to find a way to bring more production stateside. The push was part of a commitment by Walmart to buy $50 billion in American-made merchandise in the next 10 years. The pledge came after years of criticism of the retailer for selling so many imported goods from low-wage countries.

Walmart’s initiative set the folks at Elan Polo thinking: Was there a way to make some kind of shoe in the U.S. that could still be competitively priced with imports?

Joe Russell, Elan Polo’s co-chief executive, said in a recent interview that the whole initiative would have been a “nonstarter” without Walmart’s encouragement. “It certainly seemed as though it would be a daunting task, however, with solid support from Walmart, it also seemed as though it could be a doable deal,” he said.

So how did the company do it? It decided to tap into a certain kind of shoe production — injection molding — that requires little labor. Rising fuel prices and labor rates in China have also helped close the gap. Executives also note that by making the shoes in the U.S., money would be saved by avoiding the taxes placed on imported footwear.

Now they are in the midst of setting up a factory from scratch in Hazlehurst, Ga., for which they will hire about 150 workers — eventually as many as 250. Production is expected to begin in late February or early March.

The U.S. initiative was tantalizing to many Elan Polo employees, who cross several time zones to make several trips to China each year to inspect production, Russell said.

“It’s amazing — everybody raises their hand when I say, ‘Are you ready to go into American footwear?’,” he said. “When you say, ‘Who wants to go to Guangdong?,’ there are no hands raised.”

This initiative is especially notable in that many “Made in the USA” initiatives involve higher-priced goods for which consumers might be willing to pay more.

“You rarely see the low end of the market with ‘Made in the USA,’” said Marshal Cohen, a footwear analyst for NPD Group. “It’s just so difficult to compete. ... But if anyone’s going to be able to make it work, Walmart certainly can. They’ve got the reach and the ability to market it.”

He said noted that a handful of notable footwear brands have some or much of their production in the U.S. But he said added that most consumers would be hard-pressed to name them: Timberland, New Balance, Red Wing.

Matt Powell, an analyst with SportsOneSource, said noted that he’s seen some movement among higher-end boutique companies making expensive footwear in the U.S.

“I think there’s an interest and people who are on the fringes who are trying to make a way, but I would not call it a groundswell yet,” he said.

Part of the problem, Powell said is that making shoes is such a labor-intensive process.

“Most athletic shoes in America are complicated and include many steps,” he said. “The labor costs are just prohibitive.”

But as wages in Asia continue to rise while those in the U.S. do not — and amid fuel price increases — the economics could begin to make sense. He added that duties are placed on imported shoes but not on the materials to make shoes. So companies such as New Balance can save a percentage of the cost by importing shoe parts instead of completed products. Besides, shoe parts take up less space than individual shoe boxes, so companies can save on shipping costs too.

In any case, domestic production of competitively priced shoes could be compelling with shoes that require a simpler production process, Powell said.

“It makes sense that products that are mostly machine-made could migrate here,” he said.

Jeff Kirby, Elan Polo’s vice president of global sourcing, said that by using an injection molding production process, the factory in Georgia will be able to pump out about 20,000 pairs of shoes a day — compared to perhaps 5,000 a day with the same number of people for a higher-labor kind of shoe.

Injection molding entails pushing ethylene vinyl acetate, or EVA, into a machine through a mold. Under Elan Polo’s setup, people will be needed mostly just to run the machines and trim the products.

Figuring out how to get the whole operation going, though, hasn’t been easy. When Elan Polo executives began surveying the U.S. manufacturing base last spring, they found that the places using injection molding were few and far between.

“The more we looked at it, the more it became evident that we would essentially have to start this from the ground up,” Russell said.

So he reached out to McPherson Manufacturing in Hazlehurst, Ga., which he knew of through other business relationships. It has experience in a diverse array of molded products. The two companies decided to set up a 50/50 partnership called EP American Footwear. Between the two companies, they are investing more than $25 million.

Then they had to figure out where to make the shoes. Walmart held a summit in August where it set up meetings for Elan Polo executives and other suppliers with governors and lawmakers from several states, including Mississippi, Georgia, South Carolina and Florida.

There wasn’t a big difference in the offers, Russell said. So they decided on Hazlehurst because McPherson was based there.

Hazlehurst, about 100 miles west of Savannah, is in an area with an unemployment rate that has recently been as high as 15 percent, Russell said, added, so that region should have a good source of workers. An Army base, Fort Stewart, is nearby. That was an added incentive because Walmart has a commitment to hire veterans.

Kirby said the factory workers’ pay will depend on their job duties,description, but he said the wages will be above minimum. The median household income in Hazlehurst is $26,389, according to the U.S. Census Bureau.

The logistics have been the hard part. They are not as worried about the outcome. After all, they are not launching a whole new style of shoe that might or might not resonate with consumers, Kirby said. Rather, the flip flop, garden clog and soccer sandal are a staple of many big box stores.

“We’re not pushing the envelope with a new product,” he said. “They currently have this product in their stores. So you’re not taking such a big chance on whether this will work or not.”

He added that Walmart will still sell some shoes in this category that are made in China. The American-made products will supplement its assortment.

While they don’t have an official contract with Walmart, Elan Polo executives said they have a good long-running partnership with Walmart so they have faith it will work out. And, they added, Walmart has been flexible on shipping and production schedules, as well as in what they want to see in the products themselves in order to make this work.

“They are bending over some of their procedures,” Kirby said. “It may not be the same timeline they are used to.”

Walmart did not respond to a request for comment.

While Elan Polo is excited about this new initiative, executives don’t see themselves moving other kinds of shoe production to the U.S. in the near future. “From our perspective, that’s out of reach,” Russell said.

So Elan Polo will continue to have its more labor-intensive shoes made abroad.

Hush Puppies sells more than 18 million pairs of shoes every year in 160 countries.

This is a prototype of the soccer slide Elan Polo plans to make in the U.S. for Walmart.

This is a prototype of one of the women's thongs that Elan Polo plans to make in the U.S. for Walmart.