Many in St. Louis are trapped in the 'unbanked' economy
0 comments
Share this
{{featured_button_text}}
1 of 3 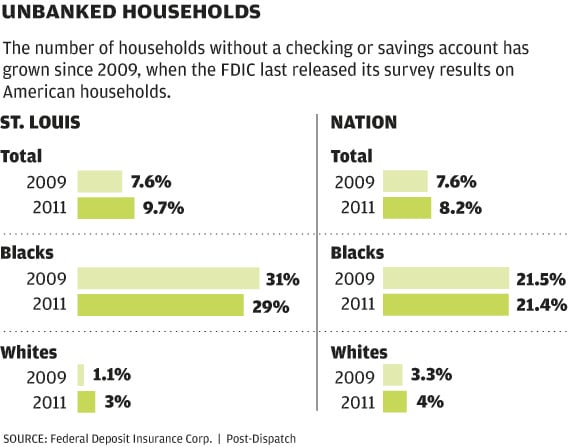 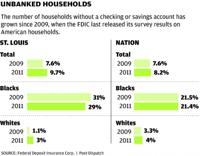 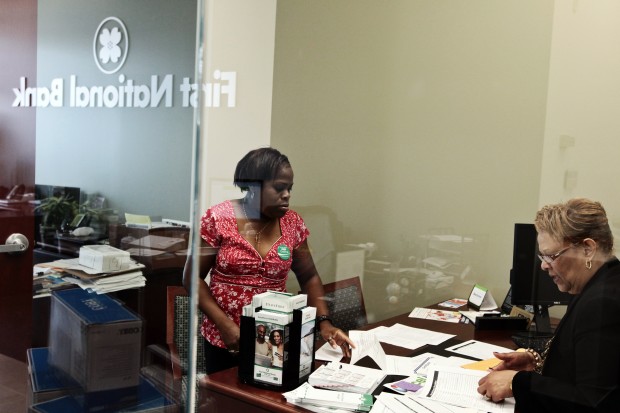 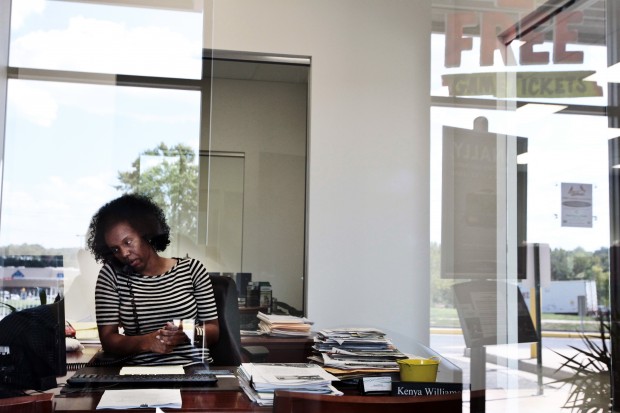 A growing number of American households don't have a checking or savings account, a clear sign of much deeper financial instability.

The percentage of households in the St. Louis region that are 'unbanked' rose to an estimated 9.7 percent in 2011, according to a survey released by the Federal Deposit Insurance Corp. Wednesday, an increase from 7.6 percent in 2009, when the survey was last conducted.

The percentage of unbanked African-American households soared to 29 percent locally, among the highest rates in the nation, though down slightly from the last survey.

For Wednesday's report, the FDIC surveyed households across the country in June 2011, partnering with the U.S. Census Bureau.

The primary reason people surveyed gave for not having a bank account was a sense that they didn't have enough money to open one, according to the report.

The increasing number of people without a checking or savings account alarms those who work with the region's poor, who often rely instead on costly alternatives to cash checks or take out loans.

"All of these things take resources out of the households," said Jacqueline Hutchinson, director of city services for the Community Action Agency of St. Louis County, an Overland-based nonprofit.

Without bank accounts and established credit, families can't buy cars and homes or start businesses, Hutchinson said, dragging down the region's economy. “It really impacts the entire community, not just the household," she said.

Since the task force formed, nearly a dozen local banks have developed new services and products for the unbanked and underbanked -- which are defined as households that have a bank account but use costly alternative financial services. The FDIC's survey found that the one in four households nationwide, or 28.3 percent, are considered either unbanked or underbanked.

The number of unbanked households would have been higher had community groups not prodded banks to increase their financial literacy efforts and outreach to underserved communities, Hutchinson said.

"The economic downturn was happening at the same time (the task force formed), and a lot of people got in trouble financially," she said.

By contrast, just one percent of St. Louis households identifying as white in 2009 reported a lack of bank accounts. That figure rose to 3 percent in the St. Louis region in the latest report.

The FDIC's 2009 study served as catalyst for community organizations to work with banks to increase access to financial services, said Rance Thomas, president of the nonprofit group North County Churches Uniting for Racial Harmony and Justice, which works with other local nonprofit groups to increase access to financial services.

"We made the community aware of the FDIC's study and the need to do something," Thomas said. "There had been a great need for some time. But I think many banks just ignored it."

Accessing a cash advance through a car title loan company, for example, can come with triple-digit annual percentage rates. At a car title loan outlet, a person with no bank account can borrow cash in exchange for a vehicle's title, jeopardizing their transportation and ability to work.

"I feel like a lot has changed in the banking culture," said Elisabeth Risch, education and research coordinator at EHOC. "There has been a lot of positive collaboration with banks, but this kind of thing takes a long time."

In a report slated to be released today by the St. Louis Equal Housing and Community Reinvestment Alliance, EHOC and other local groups cited progress on access to financial services.

Three new bank branches are opening in St. Louis County as a result of the groups' efforts, including a Midwest BankCentre branch slated to open in Pagedale in November.

First National Bank of St. Louis opened a branch in Ferguson in March, following an unfair lending complaint against the Clayton-based bank. In 2009, EHOC filed a complaint with the U.S. Department of Housing and Urban Development, alleging First National failed to provide banking services in black neighborhoods in violation of the federal Fair Housing Act.

"Most of us in the banking industry were embarrassed by the high FDIC numbers," said Rick Bagy, president of the bank.

Since opening, the Ferguson bank branch has had smaller average deposits than the bank's other branches spread throughout the metro area, he said, but home loan volume has been strong.

"I've been very happy with our home mortgage volume there," Bagy said. The bank has also rolled out new products geared to attract the unbanked. One of them, Easy Choice Checking, doesn’t allow users to overdraft their account and rack up high fees.

Hefty overdraft fees are among the reasons people moved away from banks during the economic downturn.

"There's so much distrust in the industry," said Rose Eichelberger, founder and executive director of Ready, Aim, Advocate, a Jennings-based nonprofit that offers job readiness training to the poor.

Eichelberger also has worked with banks to expand their financial literacy efforts.

"Financial education is not an option; it's a requirement," she said about her group, which pairs classes on creating a budget and savings account with job placement assistance.

New efforts are underway to reverse unbanked trends. The St. Louis Regional Unbanked Task Force will kick off a program called Bank On Save Up next year with the goal of assisting 20,000 households to open checking or savings accounts within two years.

The Federal Reserve Bank of St. Louis also plans to hold a two-day conference in late October with speakers from across the country discussing access to financial services as part of the Fed's new research effort on the state of American household's balance sheets.

“Access is the very first step to household financial stability,” said Bill Emmons, an economist with the St. Louis Fed. At the Fed's conference, speakers will present advances in technology, such as mobile banking, that could help increase access to financial services.

“Technology is going to be the real game changer,” Emmons said. “There's a feeling that this is a unique time to make a lot of progress very quickly.”

Lending to African-Americans fell by nearly half from 2007 to 2009, yet lending to whites increased 22 percent, according to a report.