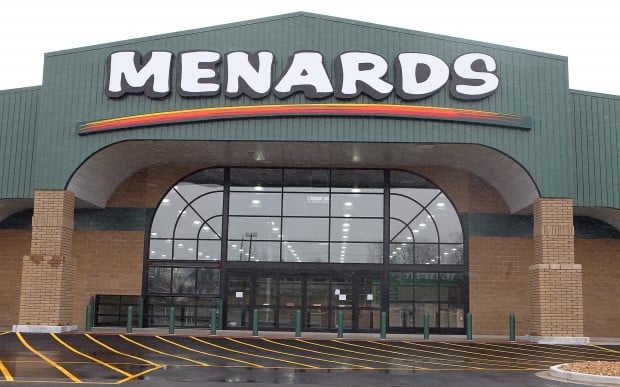 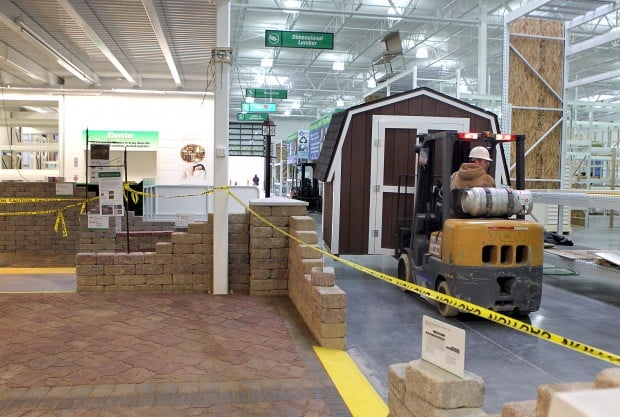 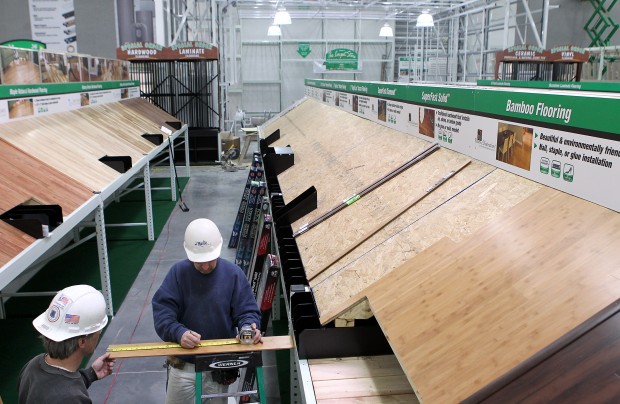 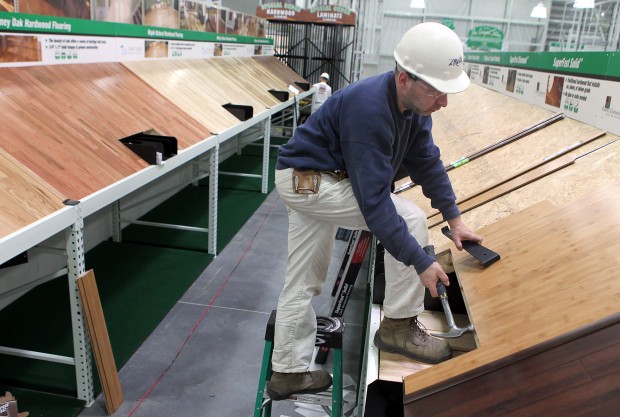 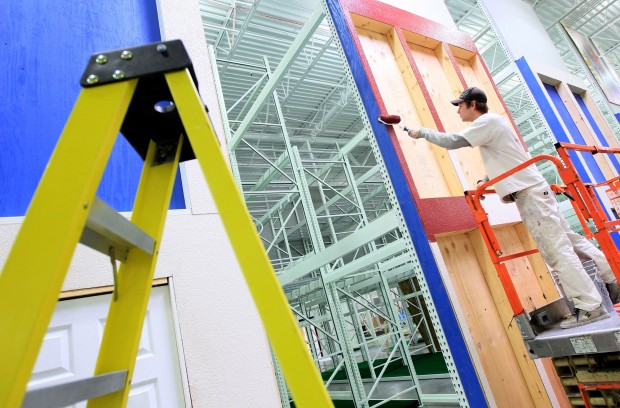 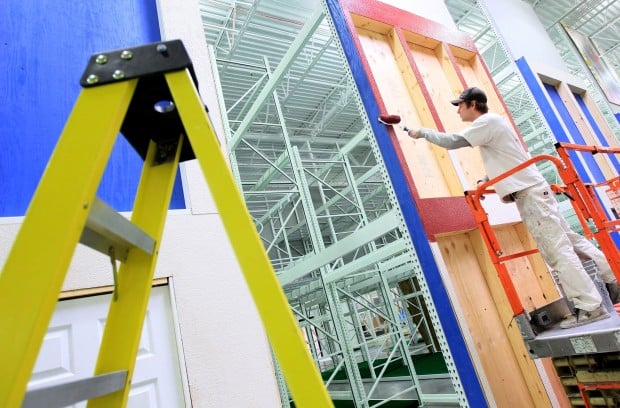 The folksy jingle “save big money at Menards” — often heard in other parts of the Midwest — will soon be making its debut in St. Louis.

Home improvement retailer Menards, which has a big presence in its home state of Wisconsin and surrounding states, is set to open its first stores — and supersized ones at that — in the area next month.

These initial two stores in St. Peters and O’Fallon, Ill. were to be the first of at least six, but Menards recently slowed its aggressive expansion push here and elsewhere amid the uncertain economy.

Saying that “the great people of the St. Louis area desperately need a better choice for home improvement products,” Menards promises to bring the “lowest prices in the region” on name-brand products.

But analysts note that prices in this industry tend to be pretty competitive, especially since many of the larger chains carry similar merchandise. They add that Menards’ larger rivals — Home Depot and Lowe’s — have an advantage with their size in being able to leverage more buying power with suppliers.

Menards’ new stores are notable in part for their sheer size — more than 200,000 square feet with a full-service lumberyard and warehouse that shoppers can drive into.

The company has been going against the grain by opening these ever-bigger stores in recent years at a time when most big-box retailers are shrinking their footprints.

Menards says these new stores will be almost double the size of a Home Depot and Lowe’s and will offer 40 percent more products than those competitors.

The privately held company’s expansion comes at a time when the industry is poised for an upswing with the housing market appearing to be on the rebound.

In January, home prices saw their sharpest increase in nearly seven years, according to real estate data firm CoreLogic. Meanwhile, the inventory of homes for sale in January fell to its lowest level in 13 years, the National Association of Realtors reported last week.

The new store openings — Menards has yet to give the exact opening dates in April — also coincide with the sector’s busiest time of year. Many home improvement retailers boost their staffing in the spring when home remodeling and construction projects get under way.

But still, even Menards has become more cautious recently, putting on hold other stores beyond these initial two slated for this region.

“We have postponed plans to build additional stores due to concerns that economic conditions will worsen, but if the economy improves, we hope to be able to reconsider,” Jeff Abbott, a Menards spokesman, wrote in an email.

He added that the company could not comment about ongoing real estate deals.

Until recently, Menards had been working on at least four other proposed stores for this region. Those stores were slated for Richmond Heights, St. Ann, Manchester and O’Fallon, Mo.

But despite Menards’ slowdown, Richmond Heights’ city manager Amy Hamilton said that city is still “moving forward” with plans for a megastore east of Hanley Road and south of Highway 40 (Interstate 64).

The proposed two-story, 246,000-square-foot Menards store would be in Hadley Township, a historically African-American neighborhood that has been the focus of a decade of failed redevelopment efforts.

The proposed Menards store for that area made major headway when it reached an agreement at the end of last year to buy about 100 properties that would be torn down to make way for the development. Those contracts are set to close by the end of this year, Hamilton said.

The city manager added that the city is still working out the details of a proposed tax assistance package to support the plan.

“We’re not anywhere close to breaking ground,” Hamilton added. “That wouldn’t be until 2014.”

A Menards store also was to be one part of the redevelopment project for the defunct Northwest Plaza in St. Ann.

Matt Conley, St. Ann’s city administrator, said the city is aware that Menards has reprioritized its store openings. But it’s not “that big of an issue” right now because there is still a lot of work to be done to get the site ready, he said.

Conley said the city believes Menards will still move forward, but on its own timetable.

Given the state of the economy, he said, “We understand why they need to be sure it’s done in a way that’s best for them.”

Menards operates in a $300 billion home improvement market of which Home Depot and Lowe’s have been taking a larger share in recent years. The two rivals now make up more than 40 percent of that market.

Founded in 1958 by John Menard Jr., Menards has 273 stores in 14 states. It has been expanding from its home base to new markets such as Detroit and Kentucky.

“These stores were seeing more and more business from St. Louis area ZIP codes, therefore we wanted to provide more access and better shopping convenience for the good folks of the St. Louis metro area,” Abbott wrote in an email.

He added that Menards was interested in St. Louis in part because of its “Midwestern values.”

“What also separates Menards from the competition is our friendly guest service and the way guests are treated like family in a hometown hardware store atmosphere,” he wrote.

The company, whose executives rarely speak to the media, would only answer questions via email.

Menards carries an eclectic mix of merchandise that veers beyond the traditional fare found in a home improvement store. It has lines of pet products and some groceries such as cereal, milk and frozen pizza. In offering such a wide selection, it aims to be a one-stop shopping experience. It even sells jewelry.

When it comes to its assortment of home improvement products, however, analysts say there isn’t a lot that separates the chain from the heavyweights of Home Depot and Lowe’s.

“The products are really almost exactly the same,” said Eben Jose, an analyst with research firm IBISWorld. “They all source from the same suppliers.”

He expects that Menards will pick up some market share as it expands, but will remain a niche regional player. Home Depot and Lowe’s, meanwhile, have already saturated most markets so their expansion has slowed if not stalled.

“Demand is growing and the industry as a whole is expanding,” Jose said. “Somebody has to grab that extra revenue.”

But Menards’ larger competitors don’t seem to be too worried — at least not outwardly.

“When there is competition, the customer ultimately wins,” Lowe’s spokeswoman Katie Hallaway said in an email. “It keeps all retailers on our toes, providing the best products and services possible.”

She added that Lowe’s matches a competitor’s prices and offers an additional 10 percent off that item if it is found at a lower price at a competitor.

Edward Jones’ Diedrich said Menards has proven that it can hold its own against Home Depot and Lowe’s in markets where it already operates. But with just 273 stores, Menards is much smaller than Home Depot with 2,200 stores and Lowe’s with 1,750.

“Certainly, Home Depot and Lowe’s are much larger, so they have more buying power and are probably able to pass that along to their customers because of their size advantage,” she said.

Diedrich added that one of the things home improvement stores have going for them is that they are a bit more insulated from online competition compared to other parts of the retail industry. After all, lumber as well as lawn and garden items are not the easiest things to buy and sell online.

But they’re not totally immune, so these companies have still been growing their e-commerce channels, investing in services such as ordering online and picking up in stores.

Local folks such as Josh Vaughn, manager of Habitat for Humanity’s ReStore in St. Louis, which sells new and used donated home improvement materials, are looking forward to checking out Menards’ new stores.

“I think it’s great for the economy,” he said. “It will keep the prices competitive and what not. So I think it’s good for the layman, the everyday guy needing a good price on home improvement.”

Campaign has raised more than $75,000 to keep independent toy store operator in business.

Customers can head to the stores in O'Fallon, Ill., and St. Peters to see if they really do offer the lowest prices, as promised.

The project includes two out lots on the premises for other small businesses.

Agreement would end years of negotiations over various projects for historic section of Richmond Heights.

A St. Ann official says Charter will put a call center in what had been Macy's

The store will be at the former Northwest Plaza

New developments spurred in part by a $23 million project to build the first Menards hardware store in the Metro East are starting to spring up.