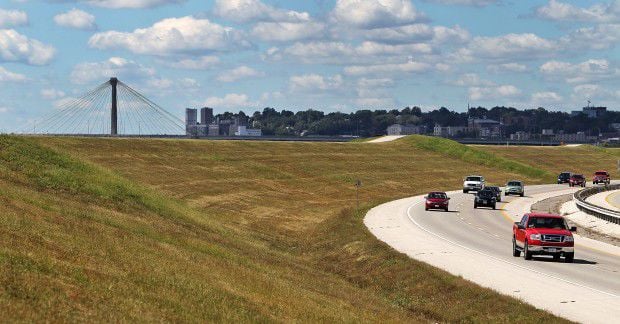 They’re already gearing up for a new round of projects and another bond sale before the end of the year that could finance work on an even higher level of protection.

And they’re not waiting for the U.S. Army Corps of Engineers to do it.

“What the board decided is why should we wait?” said Chuck Etwert, chief supervisor of the Southwestern Illinois Flood Prevention District Council. “Let’s keep moving forward.”

The levee district voted last month to work on a bond financing package that, combined with savings of some $15 million on existing projects, could put an estimated $80 million toward additional work.

Leaders see the additional projects as essential to protect property and lives from the volatile Mississippi River, which experts warn is flooding higher and making federal flood risk calculations less and less accurate.

The hope is the new work can be counted as a local match to any future federal funding toward projects to bring the levees back to what they were built to withstand some 70 years ago: a flood estimated to occur only once every 500 years.

Waiting for the corps to sign off on whether the levee district’s projects are an acceptable local match to any federal funds for levee work and “we’d waste another year and a half,” Etwert said.

Corps spokesman Mike Petersen said it’s a “relatively new” development to apply in-kind work on these types of projects. But the projects are bringing down risk — every little bit of which is important to protect the “$8 billion of investment and thousands and thousands of lives behind those levees,” he said.

So the corps is doing what it can to allow the work to be counted toward federal matching requirements.

“We continue to communicate with the flood prevention district council and work with their engineers to make sure the investments they’re making pay off the way they need them to,” Petersen said.

For several years, the district has been working to get levees back into compliance with 100-year flood protection. That’s the level the Federal Emergency Management Agency deems strong enough to withstand a flood officially estimated to have a 1 percent annual chance of occurring.

A quarter-cent sales tax in Metro East funded bonds to finance the roughly $110 million worth of work that Etwert said should be finished by the end of this year. Much of that work didn’t qualify for federal matching funds.

By next year officials hope to get approval from FEMA that the levees are again certified to withstand the 100-year flood.

Winning back the 100-year protection is seen as vital to the economy of a portion of Metro East that covers all or parts of many communities, including East St. Louis, Granite City, Alton, Cahokia, Wood River, Roxana, Sauget and Hartford.

Without 100-year accreditation, the roughly 150,000 people and 7,000 businesses would be required to purchase expensive flood insurance, stymieing economic growth in a portion of the region some say can least afford it.

Etwert and corps officials know that just settling for 100-year is not enough. But with an estimated $270 million of work left to reach the 500-year level, which the corps has said could take nearly 30 years, plenty of work remains.

“Any work toward the 500-year is good work,” Etwert said.

Petersen, though, pointed out that no federal appropriations is available now. He said the district missed out on about $9.5 million in federal funds toward 500-year flood work last year because it didn’t match the federal money.

There was no local match because the levee district insisted on using union labor for the work, which Petersen said the corps can’t mandate. However, the in-kind approach could resolve that issue, and Etwert said the corps may give more weight to union labor in its bidding process.

Meanwhile, flood experts warn that federal flood guidelines for 100-year and 500-year floods may be underestimating the river’s risk. A study from Washington University professor Bob Criss just last month estimated the 100-year flood height on the Mississippi River at St. Louis was underestimated by more than five feet.