An uncomfortable decision looms for Missouri regulators, one that pits state property rights against the renewable energy that would help in the fight against climate change.

For five years, Houston-based Clean Line Energy Partners has worked to win approval for the Grain Belt Express transmission line in the states it would cross: Kansas, Missouri, Illinois and Indiana.

The independent transmission developer says it needs the right to use eminent domain, just like utilities, in order to keep a 780-mile infrastructure project from being scuttled by one landowner unwilling to sell it an easement.

Instead, one state — Missouri — could end up blocking it.

The issue has divided the Missouri Public Service Commission. Members laid out their positions on the cross-state transmission line earlier this month, indicating a 3-2 vote may derail a project whose developers say would bring Kansas wind energy east to the grid.

Indiana and Kansas have both said yes to the line that eastern population centers would need to tap the wind energy of the Great Plains. While Illinois regulators are still considering it, the state has already given preliminary approval to one of Clean Line’s other projects from Iowa.

Missouri regulators appear to be heeding the vocal opposition of farmers who don’t want to sell easements for the line across their land. Like the interstate highways that displaced some communities and disrupted farm operations last century, a growing demand for electric highways in this millennium worries rural landowners caught in its path.

“Anyone would know if you put a 200-foot tower in the middle of someone’s property ... there’s going to be significant property devaluation,” said Jennifer Gatrel, who heads Block Grain Belt Express Missouri, the group of farmers and landowners who sit along the line’s path in the state.

But without the transmission projects, supporters say, the wind power in the sparsely populated Great Plains can’t be fully harnessed and delivered to cities trying to wean themselves off of coal.

“We are moving toward a low carbon future, and projects like this help us get there,” said John Moore, an attorney with the Natural Resources Defense Council who handles federal transmission issues for the environmental group. “I do think we need to move a little bit beyond parochialism. The flow of electricity does not stop at the state line.”

But a majority of the five-member Missouri PSC seemed swayed by their staff’s analysis that the project wasn’t needed in the state and may not have an immediate benefit to Missouri ratepayers.

While Clean Line says as much as 500 megawatts could be offloaded to Missouri buyers, it hopes to take much of the 4,000 megawatts past Missouri to an Eastern grid where prices are higher. Regulatory staff is charged with looking at the benefits to Missouri to determine if a company should have utility status and the right of eminent domain. So staff and a majority of the PSC don’t see the project as necessary to the state.

Kenney and Scott Rupp, both Republicans, said they would oppose the project. Joining them to oppose the line was Democrat Stephen Stoll, a former state legislator from Festus. Stoll said little about his rationale except that he agreed with staff.

Rupp cited property rights and the fact that Clean Line did not go through a planning process that regional transmission operators use to choose transmission projects. Those projects, such as one Ameren is proposing in Northeast Missouri, are paid for by rolling their costs — and a profit — into the electric bills of all of a region’s ratepayers deemed to benefit.

Clean Line is an independent transmission developer majority-owned by British utility National Grid and the Ziff brothers, U.S. heirs to a magazine publishing fortune who made billions of dollars investing it. Unlike a line chosen by a grid operator, Clean Line would assume all the risk of signing up enough customers to cover its costs.

Mark Lawlor, Clean Line’s director of development, has said the company bypassed the transmission operators because it would cross three of them, and the operators don’t yet have rules to allocate costs for transmission projects that cross more than one grid operator. Clean Line believes independent developers shouldn’t have to wait years while the operators hash them out.

“The (regional transmission organizations) do not have a monopoly over transmission — they never have and were never intended to be so,” Lawlor said. “There is nothing in the state statute that requires a state project to be approved or originate from an RTO. It’s an implied requirement that doesn’t exist… You’re eliminating an entire sector of the marketplace from helping to build our infrastructure.”

Jeff Clark, director of the Wind Coalition in Austin, Texas, said he was “perplexed” as to why the PSC would stop the project. He represents wind developers in Kansas who would build projects if they could connect to customers.

The commission hasn’t voted yet, so backers haven’t given up yet. They do have the support of two of the panel’s Democratic members.

Commissioner Daniel Hall, one of the supporters, said he felt the PSC should think beyond the short term impacts to Missouri ratepayers.

“I view our analysis of the public interest somewhat broader than that,” Hall said during the meeting earlier this month. “I think as a state, as a nation and as a planet, we are witnessing a long-term comprehensive movement toward renewable energy, including wind energy ... I think as we sit here today, we as a commission can either facilitate that movement or we can temporarily hinder it.”

Editorial: Missouri, my friend, is blowing against the wind

To the east and west of Missouri, a $2.2 billion, 780-mile transmission line designed to carry wind power from the great plains of Kansas to cities farther east has been approved.

Kansas said yes to the line, known as the Grain Belt Express, a while ago. Indiana also has given its approval. The most recent neighboring state to do so is Illinois, which approved Clean Line Energy Partners transmission route last Thursday. 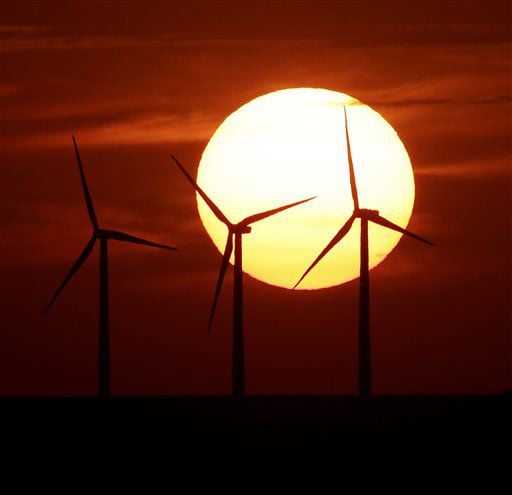 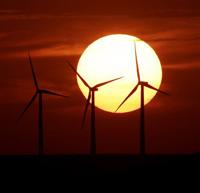 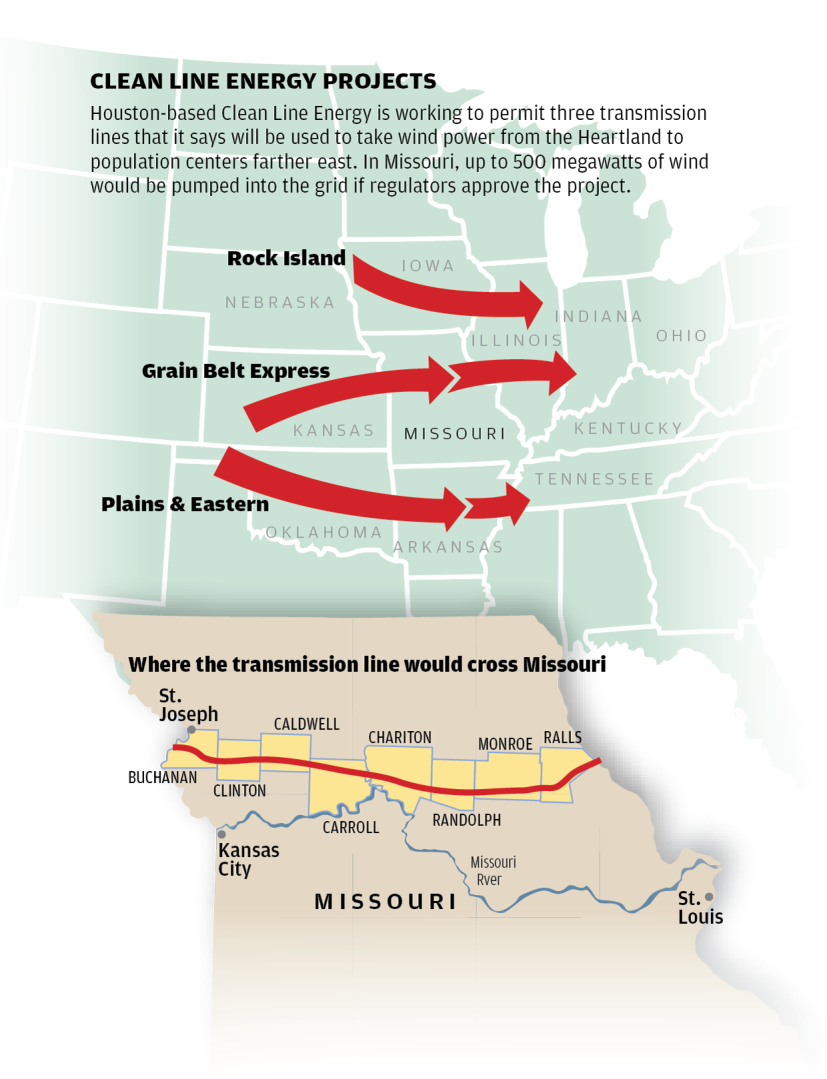 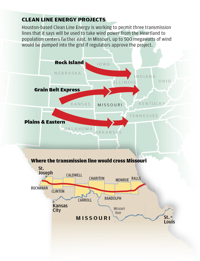 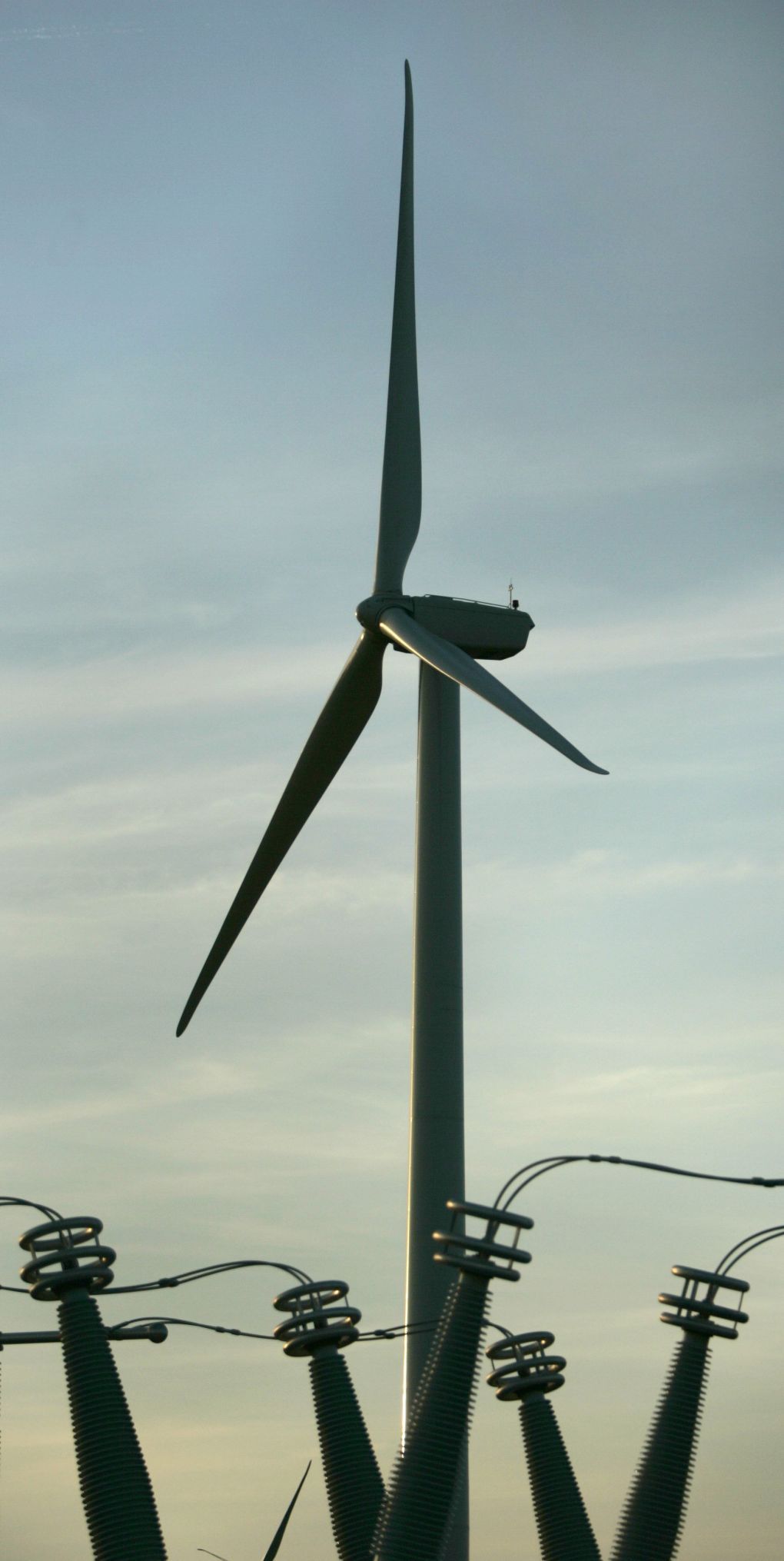 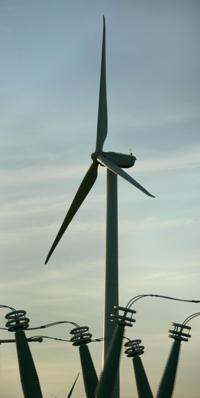 A 260 foot tall wind tower is framed behind electrical transmission equipment at the Elk River Wind farm near Beaumont, Kan. May 19, 2006. The tower is one of 100 at the wind farm which is the largest in Kansas. (AP Photo/Charlie Riedel)