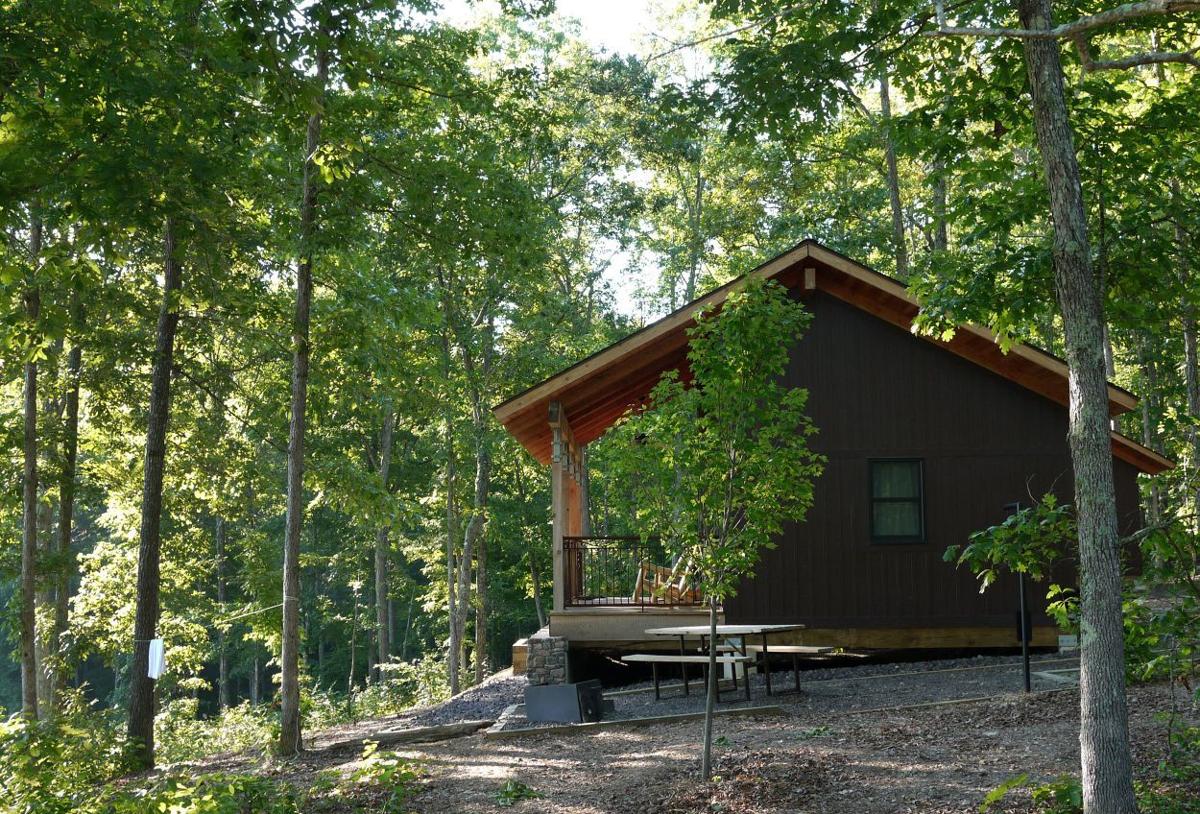 Johnson Shut-Ins moved its camping facilities to nearby Goggins Mountain. In addition to equestrian and basic camping sites, the shut-ins features six camper cabins with heating, air-conditioning and electricity. Photo by Bill Keaggy 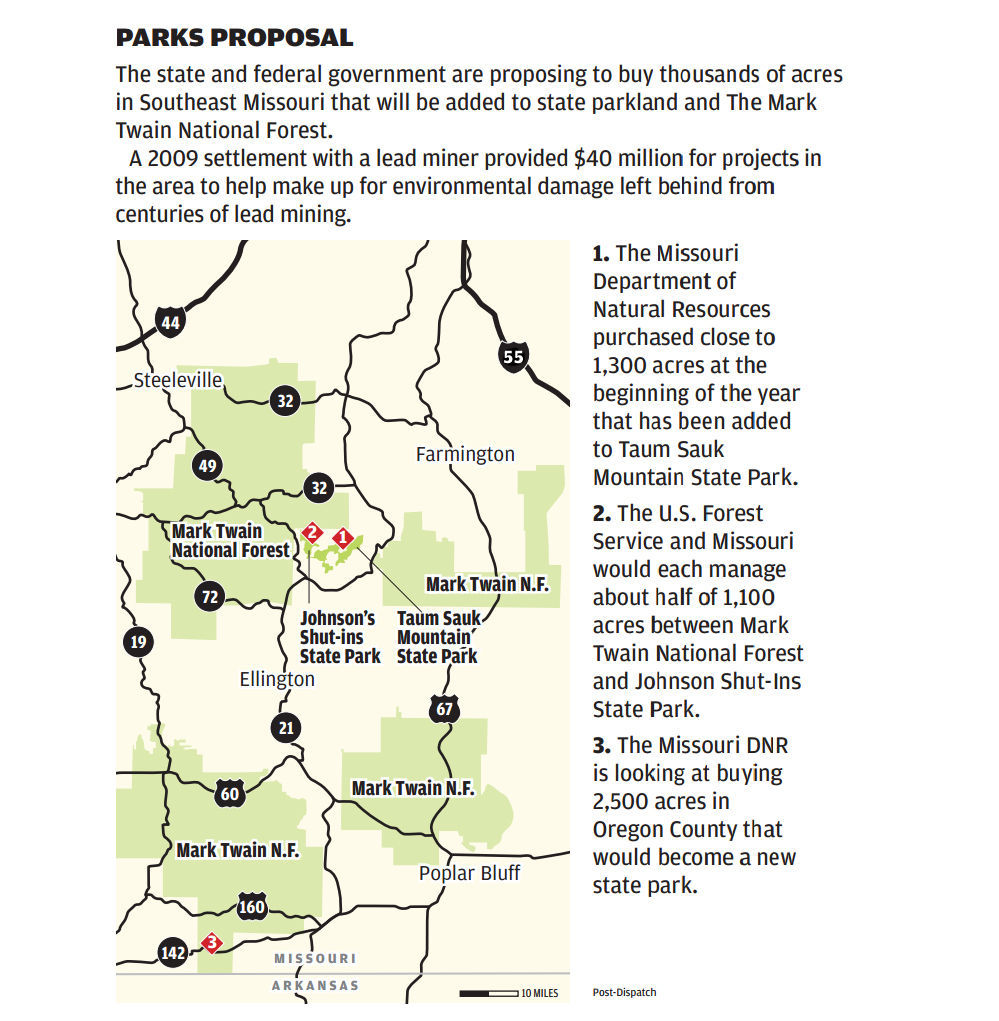 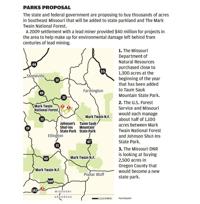 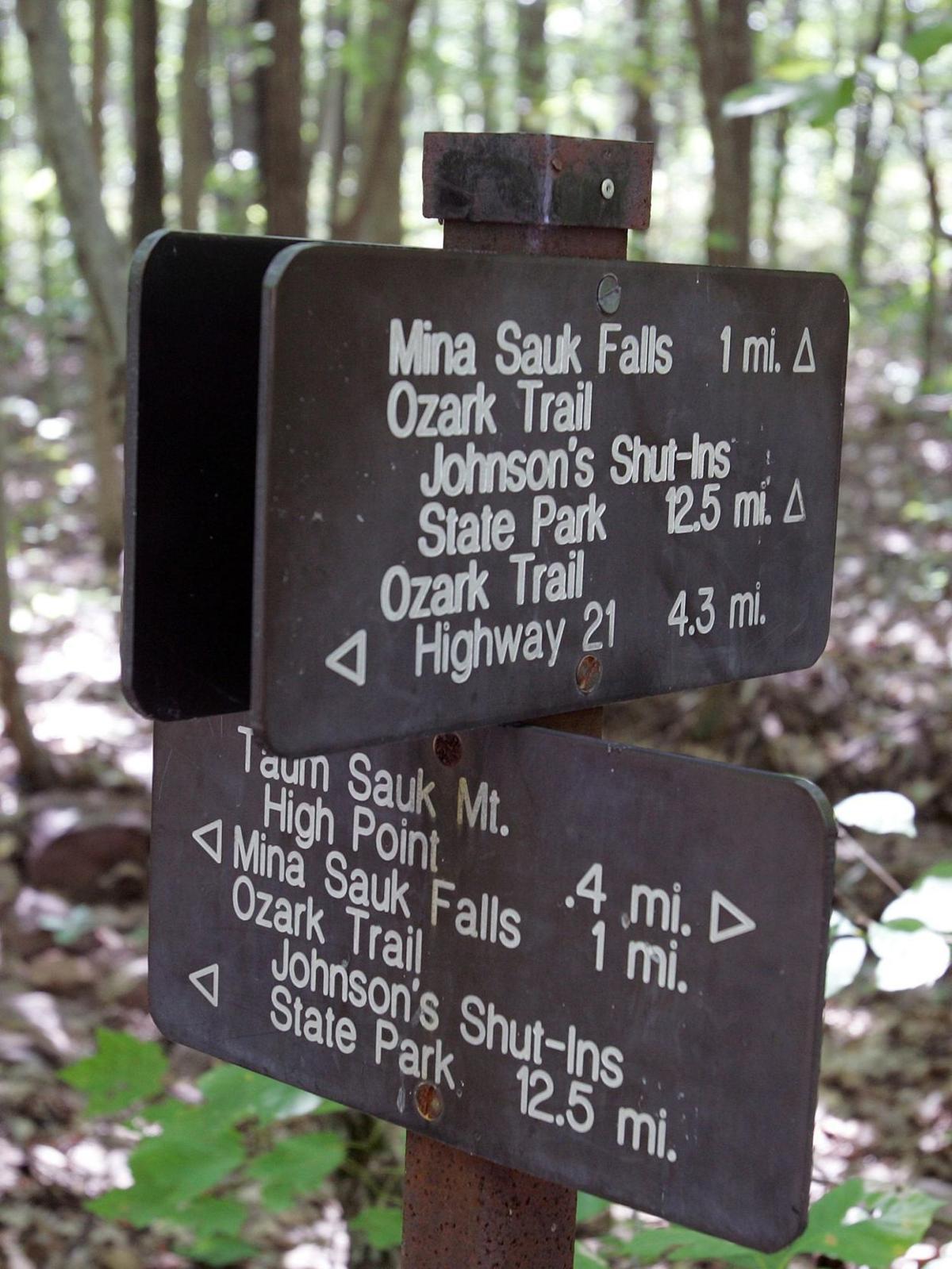 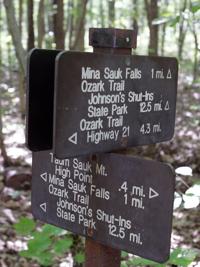 A trail marker at the Taum Sauk Mountain State Park section of the Ozark Trail trail Sunday, Sept. 3, 2006. The Ozark Trail includes 350 miles in 13 counties. The Ozark Trail emerged from a vision in the late 1970s to build a scenic and varied route in the Missouri Ozarks, from just outside St. Louis southwest to the Ozark border. (AP Photo/James A. Finley)

Missouri wants to acquire 2,500 acres along the Eleven Point River in southeast Missouri for a new state park, one of several acquisitions planned with federal agencies in an effort to conserve thousands of acres of land.

The land purchases, spread across several counties, are funded by settlement money from lead-mining companies. The funds are earmarked to restore mining areas or acquire land elsewhere to offset environmental damage from the area’s long history of lead mining.

“A lot of times at a contaminated site you can expend tens of thousands of dollars per acre to try and restore it,” said John Weber, an environmental contaminants specialist with the U.S. Fish and Wildlife Service’s office in Columbia, Mo. “And it’s not a cost effective or efficient way of spending the restoration dollars. Instead, what we’ll try to do is protect land that’s already in pretty good shape.”

The plans for the Oregon County state park and other land purchases come after many were surprised to learn in recent months that the Missouri Department of Natural Resources had secretly bought a former music festival campground in Shannon County and was developing a massive, $52 million state park on the site.

Fish and Wildlife, the U.S. Forest Service and the Missouri DNR make up a special board of trustees directing the use of about $40 million for projects in southeast Missouri.

The money is from a 2009 settlement with the American Smelting and Refining Co., or Asarco. There’s a similar but separate effort with another $20 million from the settlement ongoing near mining areas in the Joplin area.

The trustees have allocated about $28 million for the current and former round of restoration projects and land acquisitions after finishing a restoration plan for the region last year. There’s money available for further land purchases and restoration projects, including the possibility of actual lead cleanup in southeast Missouri watersheds affected by mining.

In some areas, they may have to wait until complex Environmental Protection Agency Superfund cleanups are finished, Weber said, before they come in and improve the land beyond EPA minimums. And the trustees may obtain more money for more projects if they reach settlements with other lead-mining companies.

“There are a few remaining companies out there that we may negotiate with,” Weber said.

Already, the Missouri DNR has acquired almost 1,300 acres next to Taum Sauk Mountain State Park and Johnson’s Shut-Ins State Park. It will be added to Taum Sauk, Weber said.

Also under consideration for purchase is 1,100 acres between Johnson’s Shut-Ins and the Mark Twain National Forest. The Forest Service and DNR’s state parks division would each take about half.

Some of the acreage that would be added to Mark Twain National Forest runs along Shut-In Creek near what’s known as the Bell Mountain Wilderness.

Areas along water bodies are especially valuable because of the wildlife they attract and their importance to the surrounding ecosystem, said Becky Bryan, a remediation coordinator with the Forest Service in Columbia who is involved in the southeast Missouri projects.

“It’s a high demand area, people want water on their property, so it’s harder for us to obtain riparian areas because people want to keep them in private ownership,” she said. “We would be filling in those areas that are on the edges of the wilderness, helping consolidate the ownership within the area.”

The largest proposed purchase is the 2,500 acres for a new state park in Oregon County. The agencies are still accepting public comment on that proposal, the Bell Mountain Wilderness acquisition and several small land acquisitions through Oct. 15.

The park’s name and its amenities would be chosen during the state-run planning process. The public also can comment on projects to control non-native species in the Big, Upper Black and Meramec River watersheds.

Additionally under consideration is the purchase of several hundred acres near Taum Sauk and Johnson’s Shut-Ins parks, as well as an undisclosed amount of acreage along the Eleven Point River in Oregon County.

The agencies held a public meeting at the beginning of September to discuss the plans and the public can submit comments through Oct. 15.

“A lot of these proposals are coming directly from state government,” Weber said.

But unlike the federal agencies involved, the Missouri Department of Natural Resources did not make anyone available last week to publicly discuss its plans to add thousands of acres to its holdings.

Officials in Oregon County say they have been frustrated with a lack of information from DNR. Presiding Commissioner Patrick Ledgerwood said the DNR has not been forthcoming during the process, and he’s concerned about adding more public land in a county where he said the government already owns a fifth of the acreage.

After hearing rumors over the summer and calling DNR several times, he had to drive to Jefferson City and go to the office of Missouri State Parks Director Bill Bryan before Bryan confirmed the state’s plans to acquire the land, Ledgerwood said.

“That’s just ethical, to let the citizens of that county, let their local elected officials know what’s going on,” Ledgerwood said. “And we didn’t even get the courtesy of that.”

Area legislators have complained previously of the “shroud of secrecy” around the Shannon County project, and the Salem News reported that DNR officials would not even confirm it was developing a state park.

Post-Dispatch phone calls to Bryan’s office and another DNR official handling the southeast Missouri restoration projects last week were sent to DNR spokesman Tom Bastian, who said by email on Wednesday that no one was available for an interview.

“With these settlement funds, we will be able to preserve some of Missouri’s most pristine and natural landscapes for future generations, while restoring those areas damaged by historic lead contamination,” DNR Director Sara Parker Pauley said Friday in an emailed statement. “This multiyear effort is helping the State of Missouri chart a path toward achieving the dual goals of restoring and protecting our natural resources in these areas.”

DNR does maintain a website with information about the lead mining restoration plans and how the money will be used. So does the Fish and Wildlife Service, which sent out a press release Aug. 31 about the plan and the public meeting held Sept. 2.

Ledgerwood said after he went to Jefferson City, Bryan, the state parks director, went to Oregon County to discuss the plans for the new park. But Ledgerwood said Bryan didn’t mention a public comment period during his August visit or how the project fits into the overall lead restoration program. There never was lead mining in Oregon County, and the money would be better spent elsewhere, he said.

DNR plans only about 10 primitive campsites on the land, Ledgerwood said. About 105,000 acres of Oregon County are owned by the federal government as national forest and there are ample camping opportunities in the area. It’s “not going to be an economic boon for our county,” the county commissioner said.

Instead, DNR will take a parcel five times the size of the Shannon County Park off of Oregon County’s tax rolls, along with the jobs and economic activity generated by the ranching that goes on there. Oregon County is already one of the poorer counties in the state, along with many others in southeast Missouri, Ledgerwood said.

“Most of the counties have one ingredient, or one thing in common,” he said. “It is they have more public land than other counties.”

He said no resident he has spoken to support the new state park.

“We’re willing to do whatever’s necessary on our end to try and stop it because it’s not good for our county,” Ledgerwood said. “It’s just going to make Oregon County poorer.”

Missouri and the federal government want to spend settlement money from lead contamination for a new park near the Arkansas border.

Rep. Kevin Engler, R-Farmington, was concerned about the secrecy of the process.

Ranch where Beatles stayed could become a Missouri state park

Owners of 2,200 acres of the old Pigman Ranch in the Ozarks say they are in negotiations with the state.

Two bills would force the state to sell 2,500 acres in Oregon County.

Long a summer camp destination and later famous for music festivals, the property will be the newest state park. when it opens next year.

Land described as "magical" by some will be open to everyone sometime next summer.

Johnson Shut-Ins moved its camping facilities to nearby Goggins Mountain. In addition to equestrian and basic camping sites, the shut-ins features six camper cabins with heating, air-conditioning and electricity. Photo by Bill Keaggy

A trail marker at the Taum Sauk Mountain State Park section of the Ozark Trail trail Sunday, Sept. 3, 2006. The Ozark Trail includes 350 miles in 13 counties. The Ozark Trail emerged from a vision in the late 1970s to build a scenic and varied route in the Missouri Ozarks, from just outside St. Louis southwest to the Ozark border. (AP Photo/James A. Finley)