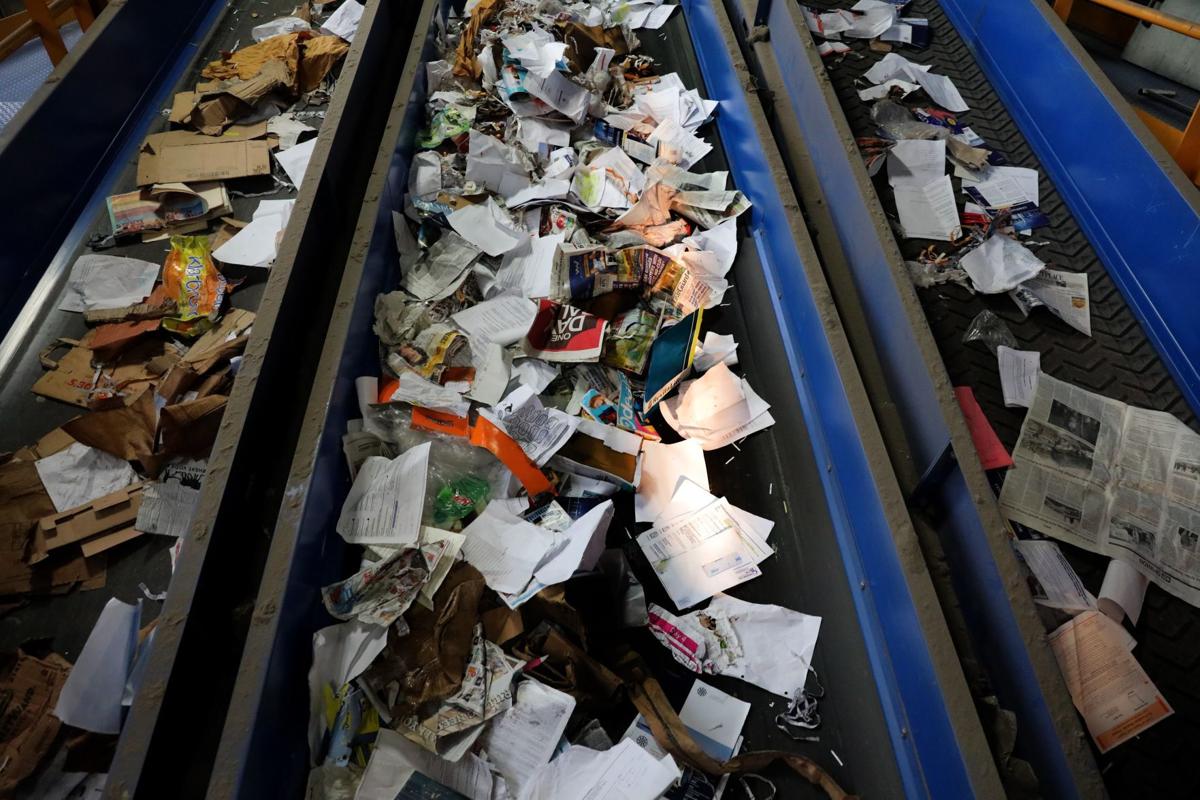 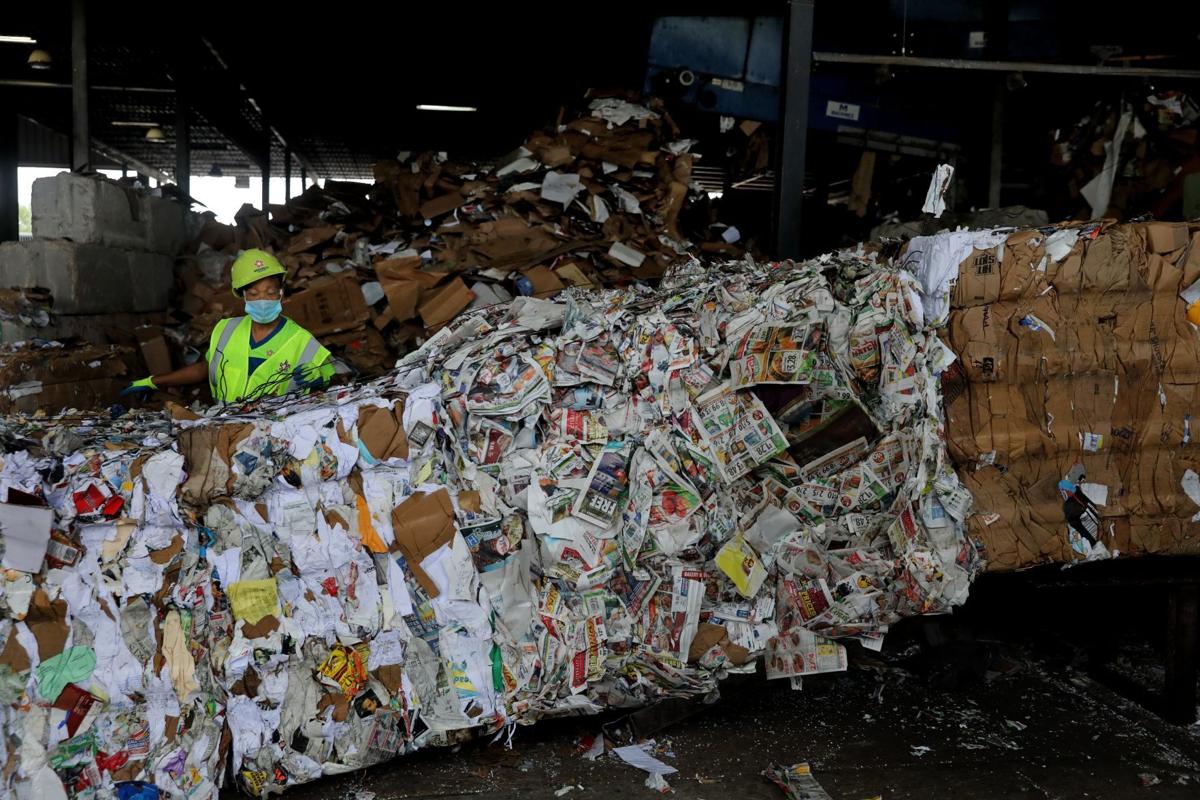 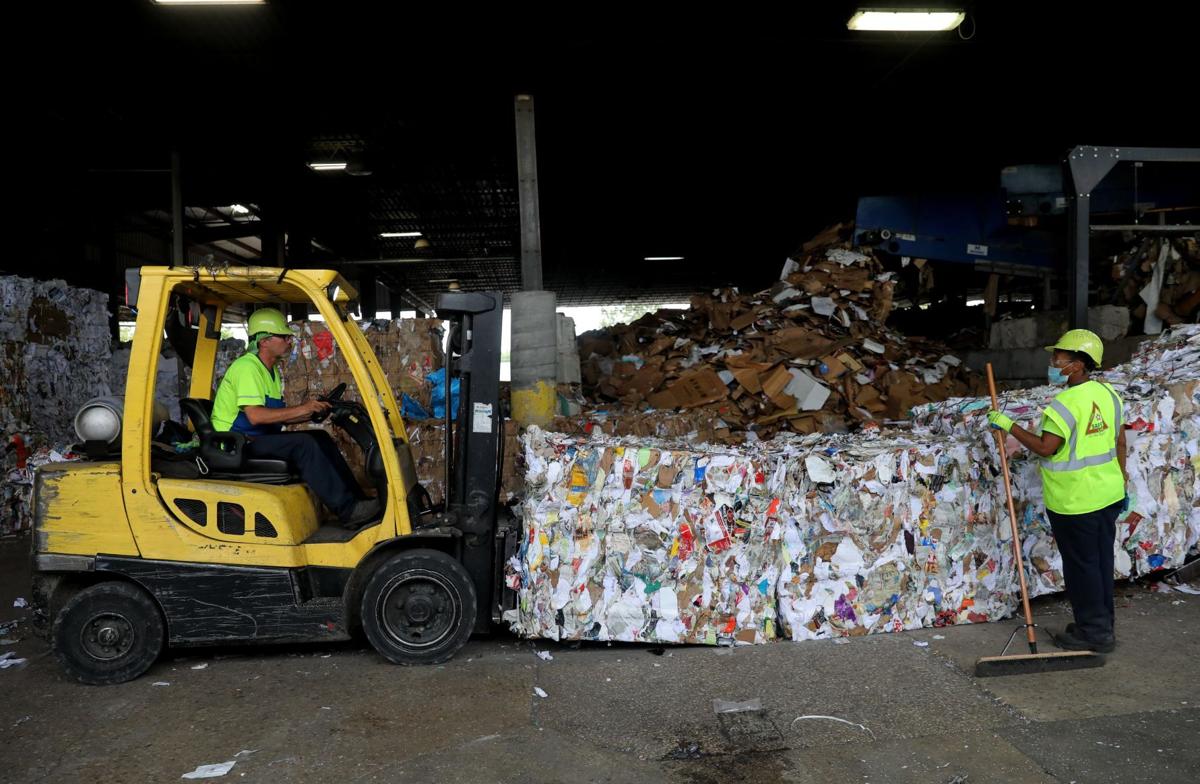 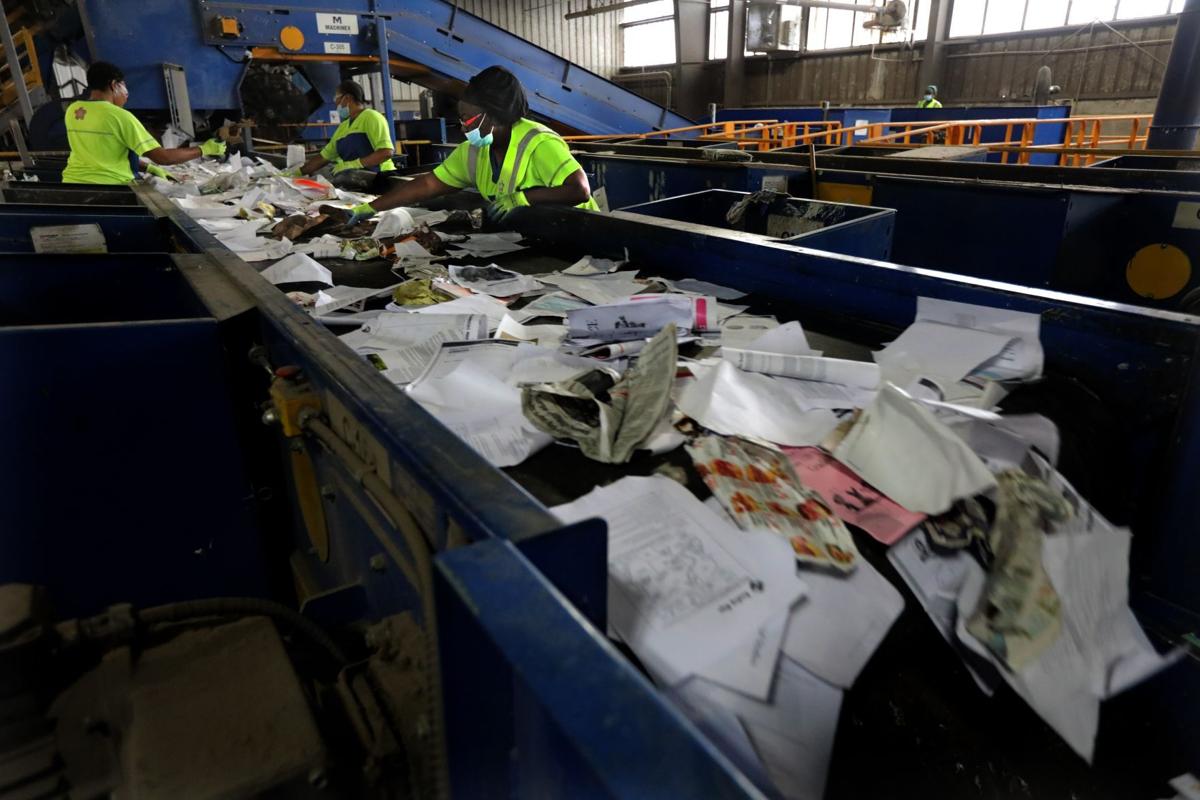 Employee Barb Tillman, right, manually pulls out pieces of cardboard and trash from the paper lane as it moves along a conveyor to be separated and bundled on Wednesday, Sept. 2, 2020, at Republic Services' recycling center in Hazelwood. Photo by Laurie Skrivan, lskrivan@post-dispatch.com 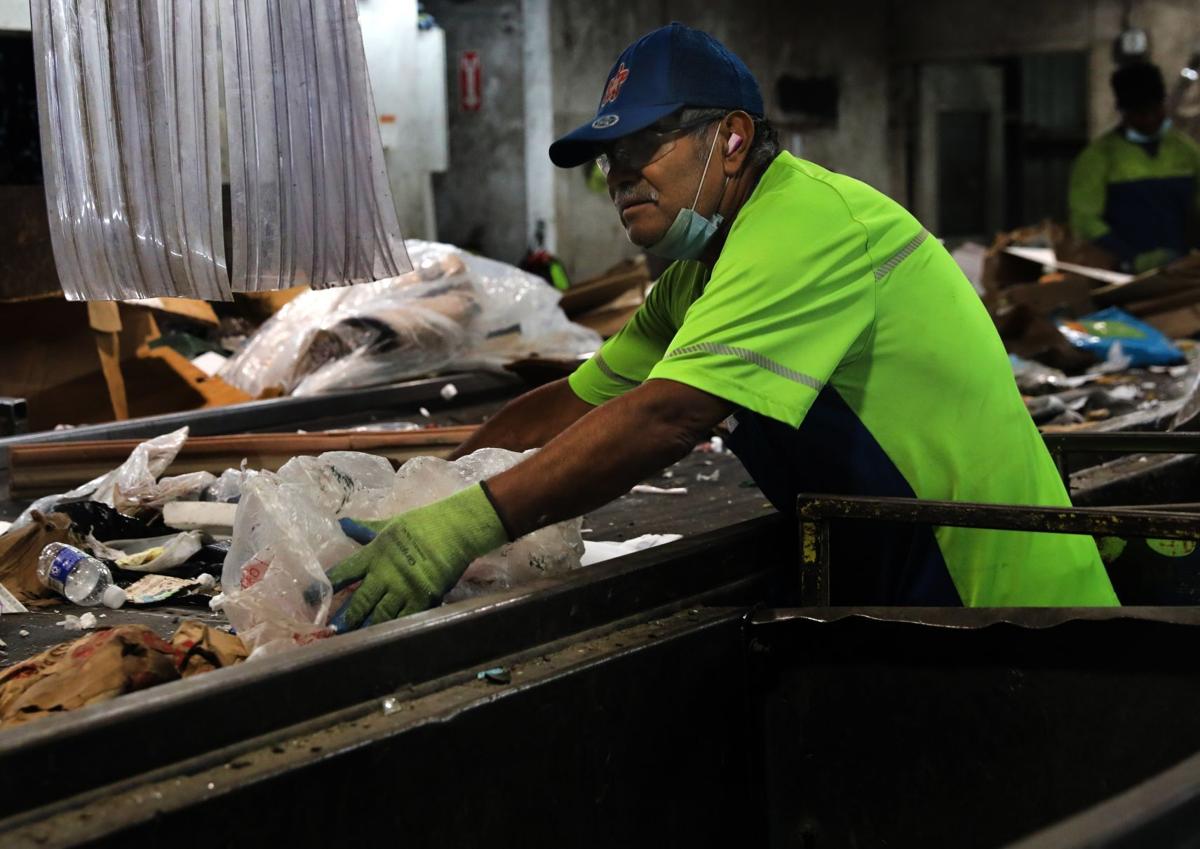 Employee Jose Reyes pulls out plastic and trash recyclable materials move along a conveyor to be separated and bundled on Wednesday, Sept. 2, 2020, at Republic Services' recycling center in Hazelwood. Photo by Laurie Skrivan, lskrivan@post-dispatch.com 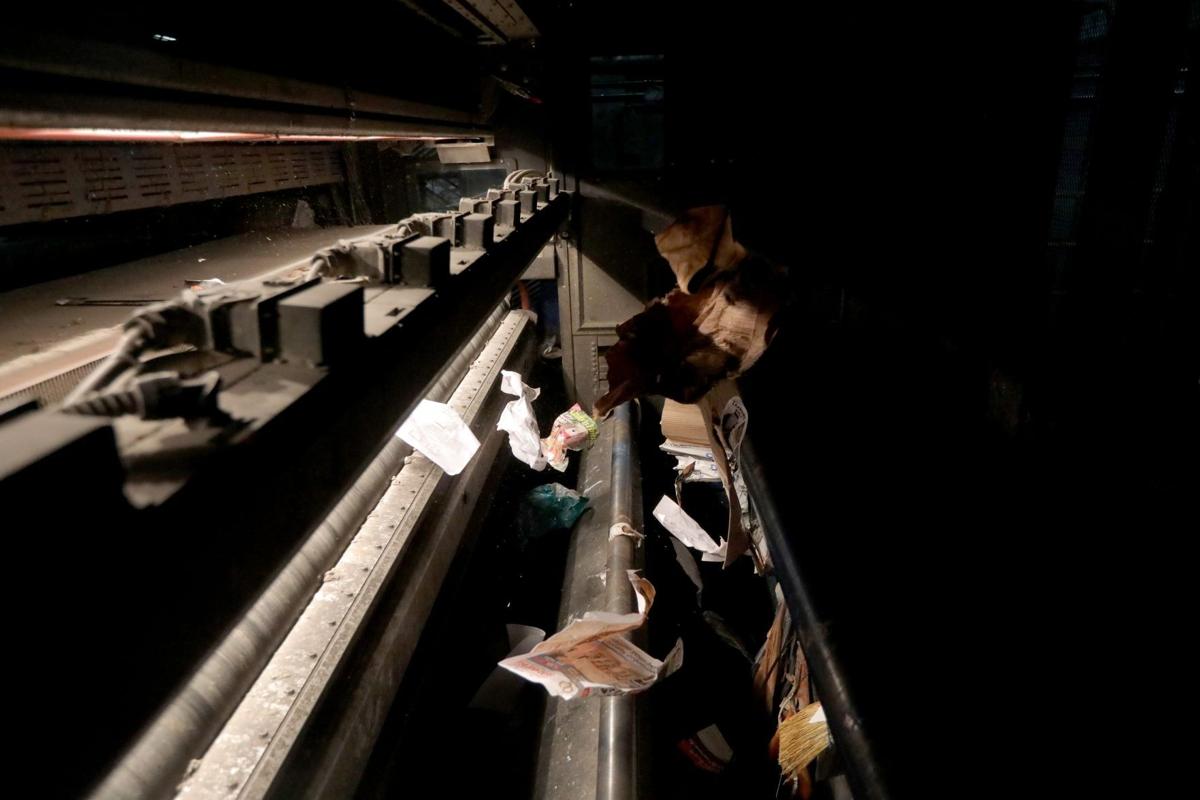 HAZELWOOD — An unruly mountain of stray paper, cardboard, beer cans, tissue boxes and containers of all sorts spills out of the building at Republic Services’ recycling center here — the dominant collection site for the St. Louis area’s mixed recycling streams.

“We never had a big pile that high,” said Brent Batliner, who manages the site.

It looks like trash at this stage, before the facility’s $10 million maze of equipment goes to work. But soon, it’s sorted and transformed into tidy rectangular bales ready to be sold as individual commodities, like recyclable aluminum, cardboard, or milk jugs coveted for their ability to be dyed any color during their plastic reincarnation.

Lately, though, Batliner’s team has had to work harder to complete that conversion. Volumes are way up. And the balance of ingredients that make up the stream has shifted, with more cardboard from package deliveries, and more beverage containers from people’s homes. Moreover, they’re messier, pocked with greasy pizza boxes and — far worse — the dreaded plastic bag.

The changes all reflect ways in which the ongoing coronavirus pandemic has altered the recent rhythms of recycling — and how, for the last several months, the mountains of material have told far-reaching stories of society’s response to the outbreak.

Perhaps the most obvious coronavirus-induced shift is seen in the overall volume of recycling. As workplaces vacated, many commercial sources of recycling dried up — dropping by about 50%, according to Elysia Musumeci, who coordinates recycling outreach and education for the city of St. Louis.

But with many people confined to home, a simultaneous surge in residential recycling has more than made up for the loss of commercial volume, Batliner says. Now, compared to pre-pandemic times, the region has seen a roughly 10% increase in the total amount of material collected for recycling, he says.

The sprawling mound in front of the recycling center in Hazelwood is a testament to that shockwave. Normally, the pile from residential sources is not so massive that it extends outside of the building — a rarity typically only seen sometimes around the holidays, Batliner said.

The most visible change is the rising tide of plastic bags, he said, which cannot be recycled at the facility. Instead, they’re a top nuisance, getting tangled in machinery and requiring frequent removal, when the lines of conveyor belts are brought to a stop. Republic Services even created a new “screen cleaner” position at the site in recent months, increasing the labor dedicated to untangling the plastic that gums up the sorting process.

The influx of plastic bags comes as grocery stores have barred reusable bags as a health precaution, and as places like restaurants have turned to carry-out orders as a primary means of doing business. But the region’s recycling industry insiders name a long list of other contaminants they’ve seen with greater regularity since the start of the pandemic — ranging from big to small, from clothing and electronics to sauce packets and corks.

One distinct headache comes from disposable masks, gloves, and other personal protective equipment used by area residents. There’s also been a rise in forms of plastic wrap and film used in packaging, as well as more signs of work around the house — unwanted yard waste, drywall, screen doors, and large furniture items that threaten to damage recycling center machinery or injure workers.

“People are cleaning out their houses,” said Jenny Wendt, a project manager for University City who handles environmental and economic development issues.

Of course, problems remain from familiar foes like spaghetti, chicken bones, and other food waste that irreparably contaminates parts of the stream.

About 20% of the material that comes through the Hazelwood recycling center cannot be used, and ends up “making a very long trip to the landfill,” Batliner said.

And that number has risen during pandemic by 50 tons a month — just one percentage point more for the facility, but a huge rise in shopping bags and plastic film.

“It takes a lot more plastic bags to make a pound,” Batliner said.

Alongside the new trends in contamination, there have also been shifts in the intake of desirable material.

For a trained eye like Batliner’s, the biggest difference can instantly be seen in the pile of material waiting to be sorted.

“You used to never see that much brown,” he says, commenting on the generous amounts of cardboard littered throughout the heap — profitable deposits, yet to be mined.

The spike in cardboard is a direct reflection of online shopping binges, and the rising influence of e-commerce amid the pandemic. By weight, cardboard represents about 50% of the recyclable material recovered at the Hazelwood plant — more than any other commodity.

Ebbs and flows have applied to other materials, too. In April and May, for instance, Batliner says there was a major cutback on the volume of the inserts and advertisements, or “mailers,” sent through the mail.

National numbers back that up. Mailers were down by more than 40% in the second quarter, said Pete Keller, the vice president of recycling and sustainability for Republic Services’ nationwide operations.

At the same time, he added that the company has seen a “pretty significant increase” — reaching as much as 20% growth — in the amounts of recycled aluminum and the type of plastic commonly used for beverage containers.

Demand for the Hazelwood plant’s products has also changed.

Batliner says there was briefly a spike in prices for mixed paper in the early days of the outbreak — after the society-wide run on toilet paper made paper mills desperate to find more paper.

The e-commerce boom, meanwhile, has helped fuel a nearly insatiable demand for packaging. For a couple months, that became the most common destination for recovered plastic from the Hazelwood recycling facility, temporarily leapfrogging a carpet company that typically buys up huge volumes of plastic bottles as a chief raw material. That company’s business was interrupted for a while, but has recently rebounded, Batliner said.

Glass, though, seems to have hit a slump — something Batliner attributes to widespread bar closures.

“It’s almost like one thing is trading off for the other,” he said.

Industry-altering disruption is not new. Just two years ago, China imposed policies that drastically reduced allowable contamination levels for recyclable paper, cutting itself off as a top destination for the material, virtually overnight.

Locally and nationally, recycling services absorbed financial hits from the move, as prices for mixed paper cratered, and a scramble for new markets ensued.

Since then, the aftermath has seen some alternative buyers for recycling paper emerge — including at domestic mills in the U.S. — and prompted some new investments within the industry.

In Hazelwood, for instance, Batliner says that a $3 million piece of equipment for sorting paper was bought in response to China-related fallout, but is now helping pay extra dividends.

All of this leaves industry and public officials asking just a few things of area residents:

Give them clean, empty, dry recyclables — and keep the plastic bags out of the bin.

Employee Barb Tillman, right, manually pulls out pieces of cardboard and trash from the paper lane as it moves along a conveyor to be separated and bundled on Wednesday, Sept. 2, 2020, at Republic Services' recycling center in Hazelwood. Photo by Laurie Skrivan, lskrivan@post-dispatch.com

Employee Jose Reyes pulls out plastic and trash recyclable materials move along a conveyor to be separated and bundled on Wednesday, Sept. 2, 2020, at Republic Services' recycling center in Hazelwood. Photo by Laurie Skrivan, lskrivan@post-dispatch.com