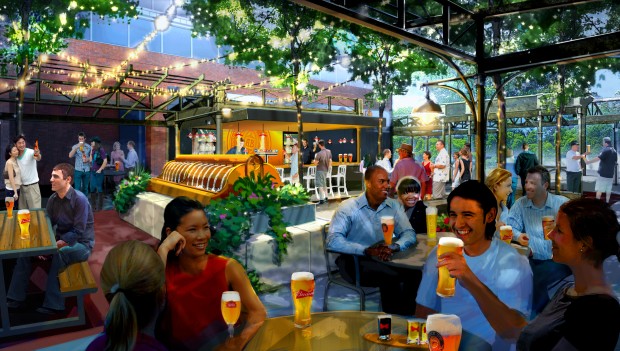 A-B plans to open its new 'biergarten' adjacent to the tour center at its St. Louis brewery in Soulard by mid-summer. Rendering courtesy of Anheuser-Busch. 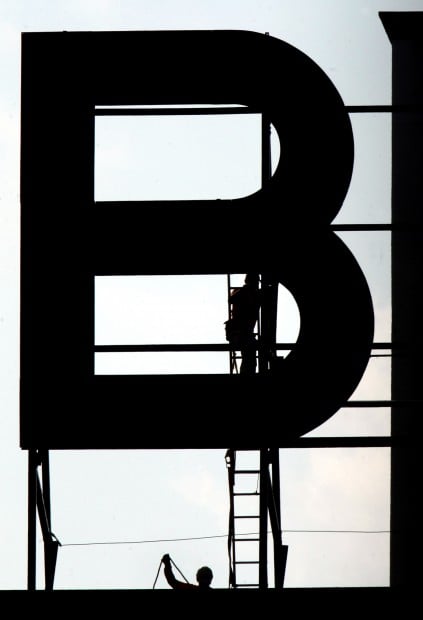 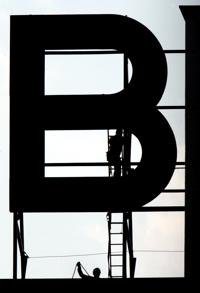 FILE PHOTO: Workers began dismantling the iconic Budweiser sign above the Anheuser-Busch bottling plant on Monday, Jan. 26, 2013. The 150-foot-long sign, installed in 1979, is being upgraded to shine more brightly, using LED technology. Removing the sign is a difficult process - the "B" alone is 18 feet tall and weighs 2,400 pounds.  The 'B' will be featured in the brewery's new biergarten. Photo by Robert Cohen, rcohen@post-dispatch.com

The throngs of visitors who tour Anheuser-Busch’s St. Louis’ brewery in Soulard will soon be able to extend their stay at a new outdoor beer garden with seating for 300.

Anheuser-Busch is building a new ‘biergarten’ — German for beer garden — adjacent to its Tour Center at 12th and Lynch streets, already one of the largest tourist attractions in the region. St. Louis is the only one of A-B InBev’s 12 U.S. breweries with a beer garden in the works.

Construction is set to begin next month, with a mid-summer opening planned.

The new beer garden, which has no admission fee, will sell food including grilled meats and small sandwiches in addition to beer. Some of the food will even include beer as ingredients.

“It’s not about sitting down and having a big meal, it’s about small plates that enhance the beer experience,” said Julia Mize, A-B’s vice president of experiential marketing.

Those who have come to expect the free beers at the end of A-B’s brewery tours need not worry. The beer garden won’t replace the two free beers currently offered to tour-goers 21 and older, company officials said. Participation in a brewery tour is not required for admittance to the beer garden.

The beer garden is designed to give visitors a chance to learn about some of A-B InBev’s more than 200 brands in a setting reminiscent of beer gardens prevalent in St. Louis in the 19th century, company officials said. It’ll have similar capacity as the beer garden at Grant’s Farm in south St. Louis County, but with a more contemporary feel.

The beers available for sale will include familiar fare such as Budweiser, and those with origins from around the globe, including Stella Artois, which is owned by the brewer’s parent company, Belgium-based A-B InBev. Some beers will be available in 3 or 4-ounce glasses in flights of five.

“We will rotate the taps, so we’ll be able to offer an interesting flight experience,” Mize said. “In addition to Budweiser, Bud Light and Michelob Ultra, we’ll also offer beers from around the globe. We see a resurgence in consumers’ desire to taste and learn new things.”

Each of the 17 beers on tap will be served in the appropriate glassware, and a Brewmaster’s Tasting will be held each day at 3 p.m., the same time A-B’s brewmasters across the country taste beer for consistency and quality.

One familiar landmark that will be incorporated in the décor is the 18-foot red letter ‘B’ that was part of the Budweiser sign that stood atop the St. Louis brewery since 1979. The sign was dismantled in February and replaced with a new LED sign that uses less electricity and requires less maintenance.

Both the sign upgrade and the beer garden are included in the St. Louis brewery’s $20 million annual capital improvement budget; however, the company declined to disclose the cost of the beer garden project.

Of A-B's dozen breweries in the United States, five offer tours. The company is developing a new beer tasting experience at its Fairfield, Calif., brewery, but no other beer gardens are in the works.

A-B began offering brewery tours in St. Louis in 1887 and has grown to become one of the region’s largest tourist attractions, drawing 350,000 visitors annually. The free tour offers views of the world’s largest brewer’s massive brew kettles, bottling lines and the stables that house the Budweiser Clydesdales.

A-B’s new addition will serve to attract more visitors to the city, said St. Louis Convention & Visitors Commission spokeswoman Donna Andrews. “It’s almost like a signature thing you have to do when you come to St. Louis,” Andrews said. “This will give people who have visited and done the tour in the past a reason to come back.”

A Budweiser Brew House restaurant also is planned for the first phase of the Ballpark Village development next to Busch Stadium downtown that’s being developed by Baltimore-based Cordish Cos. That restaurant will offer German cuisine, more than 100 beers on tap and a beer garden.

At the beer garden planned at its St. Louis brewery, A-B will display artifacts from its long history here.

“We have a tremendous portfolio of brands, and there’s no better place to tell that story than in our hometown brewery,” Mize said.

The 300-seat biergarten will serve a variety of A-B InBev's beers in addition to food.

Seventeen A-B beers will be available on draft, in addition to food.

The craft brewer gets closer to start of expansion.

Brewer explores possibility of using horses as part of its global push to build sales.

A-B plans to open its new 'biergarten' adjacent to the tour center at its St. Louis brewery in Soulard by mid-summer. Rendering courtesy of Anheuser-Busch.

FILE PHOTO: Workers began dismantling the iconic Budweiser sign above the Anheuser-Busch bottling plant on Monday, Jan. 26, 2013. The 150-foot-long sign, installed in 1979, is being upgraded to shine more brightly, using LED technology. Removing the sign is a difficult process - the "B" alone is 18 feet tall and weighs 2,400 pounds.  The 'B' will be featured in the brewery's new biergarten. Photo by Robert Cohen, rcohen@post-dispatch.com