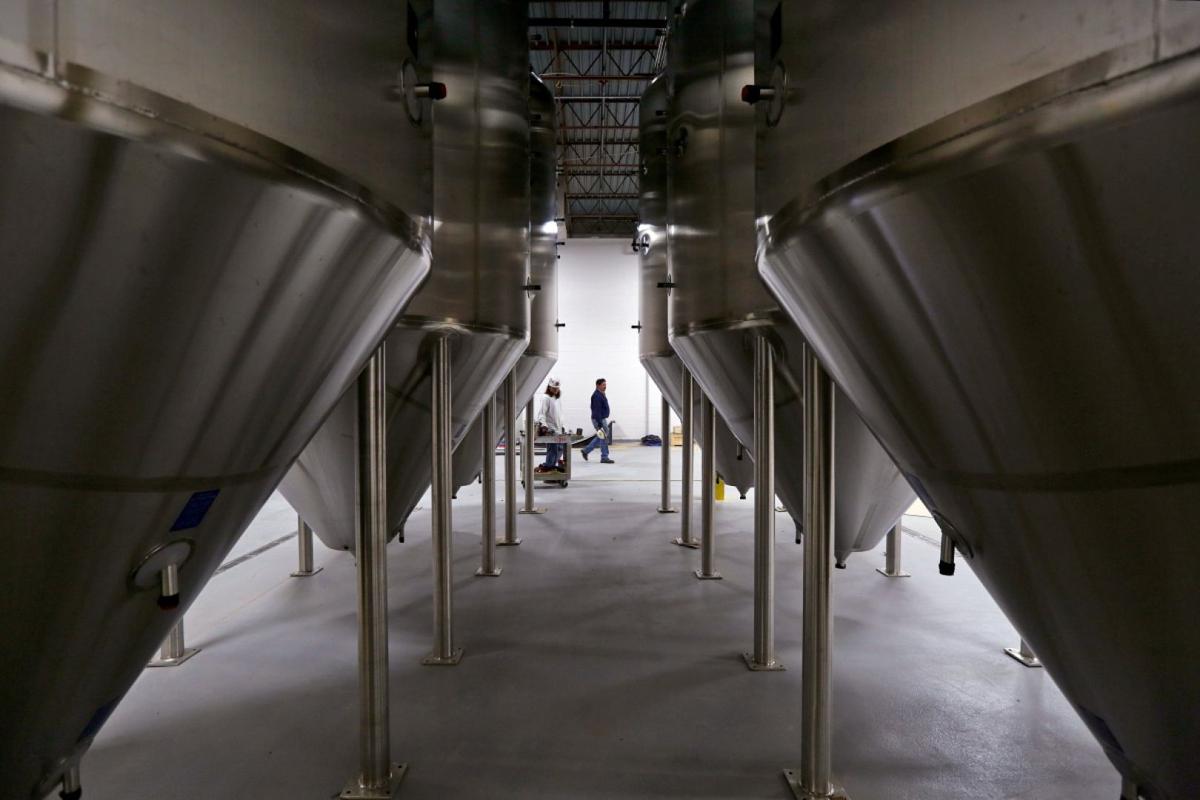 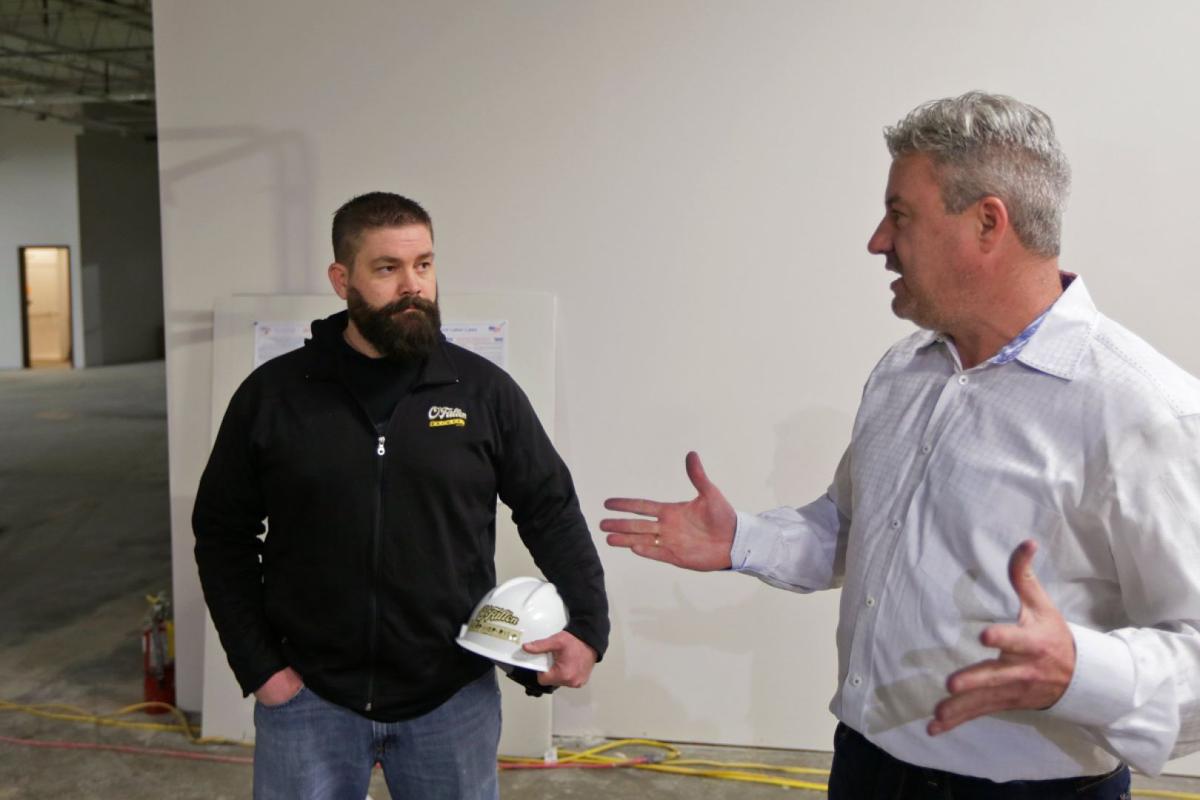 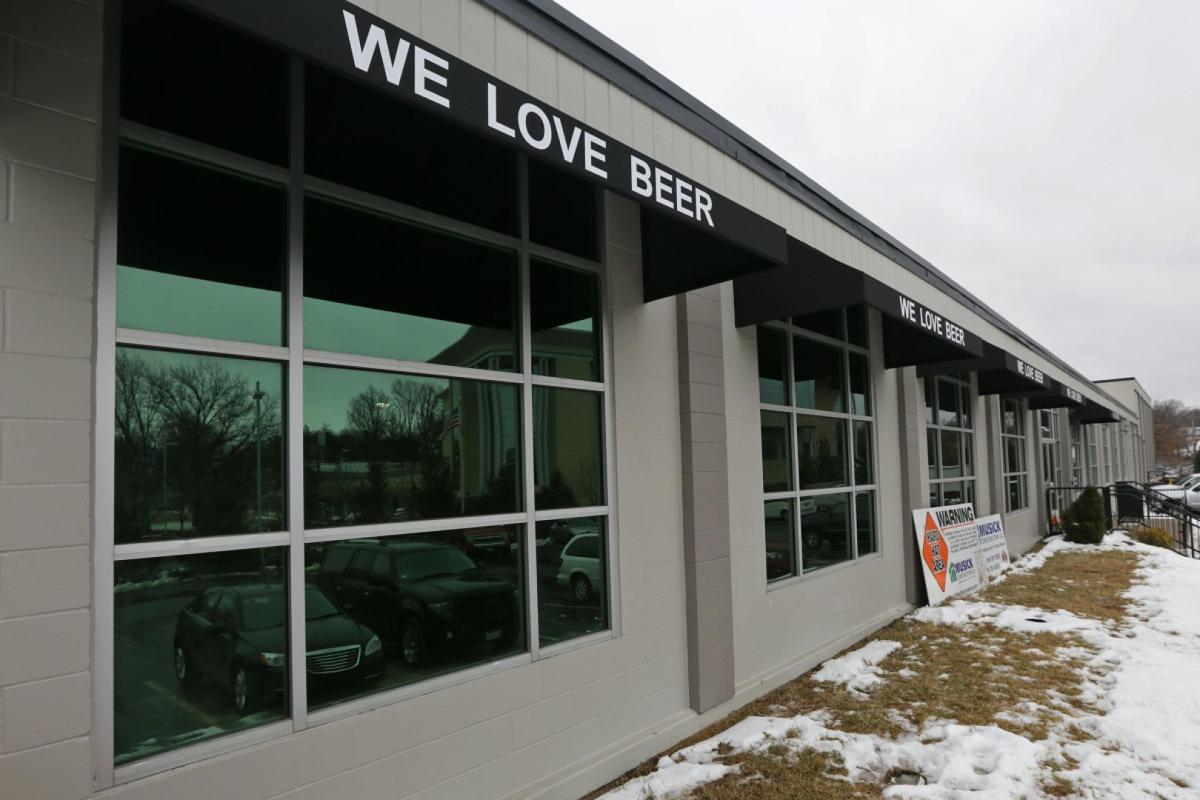 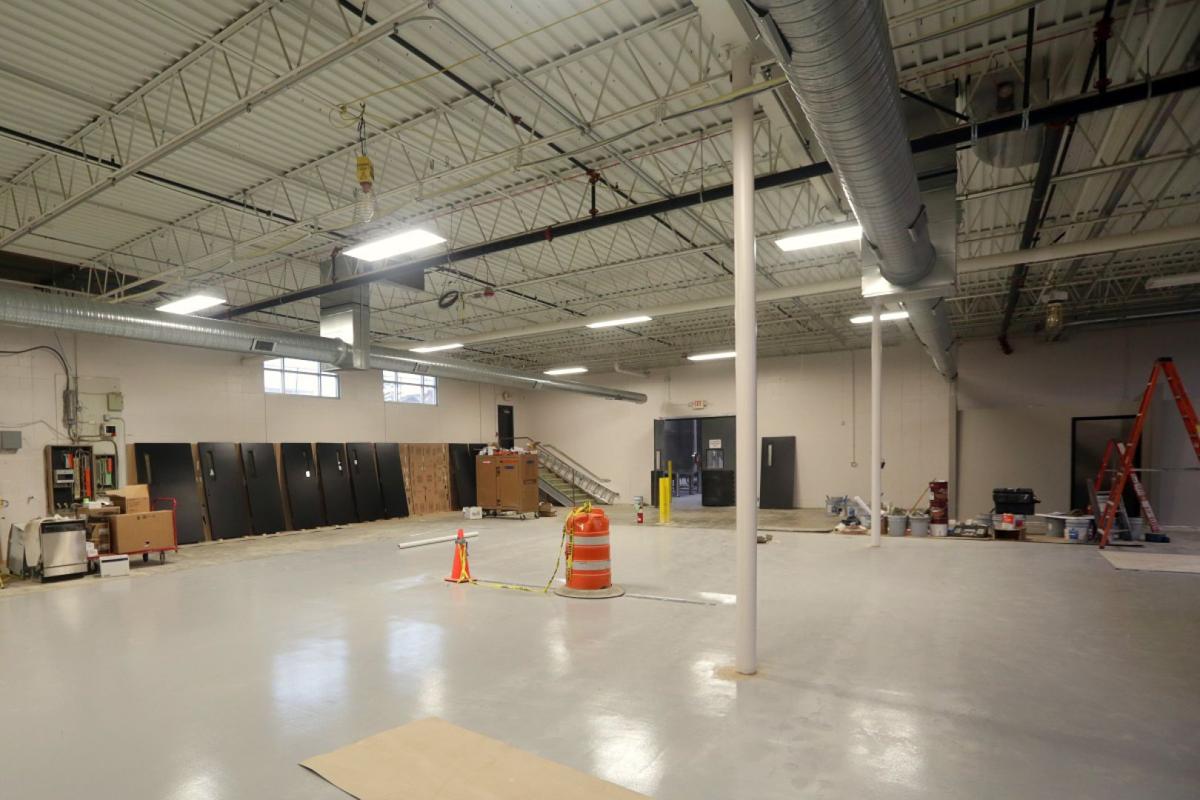 A view of the bottling area of the nearly completed O'Fallon Brewery's expansion building on Tuesday, March 3, 2015 in Maryland Heights. Photo by Huy Mach, hmach@post-dispatch.com 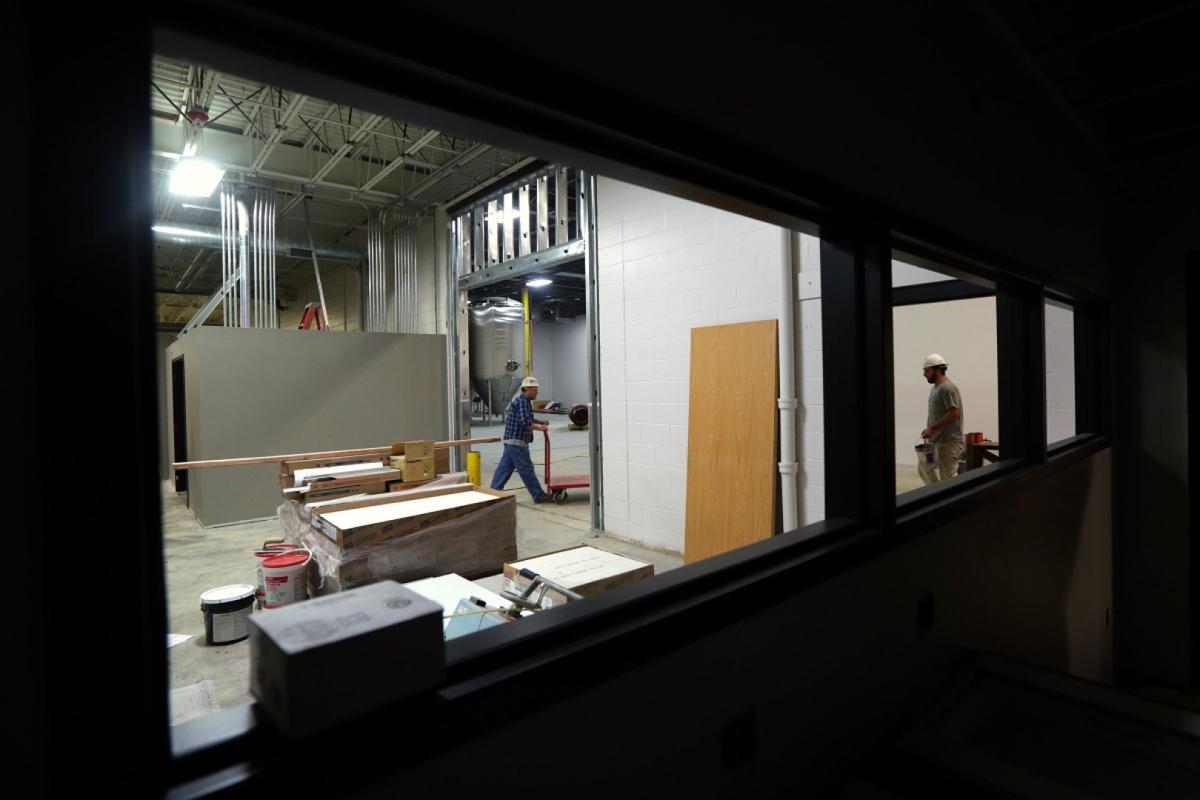 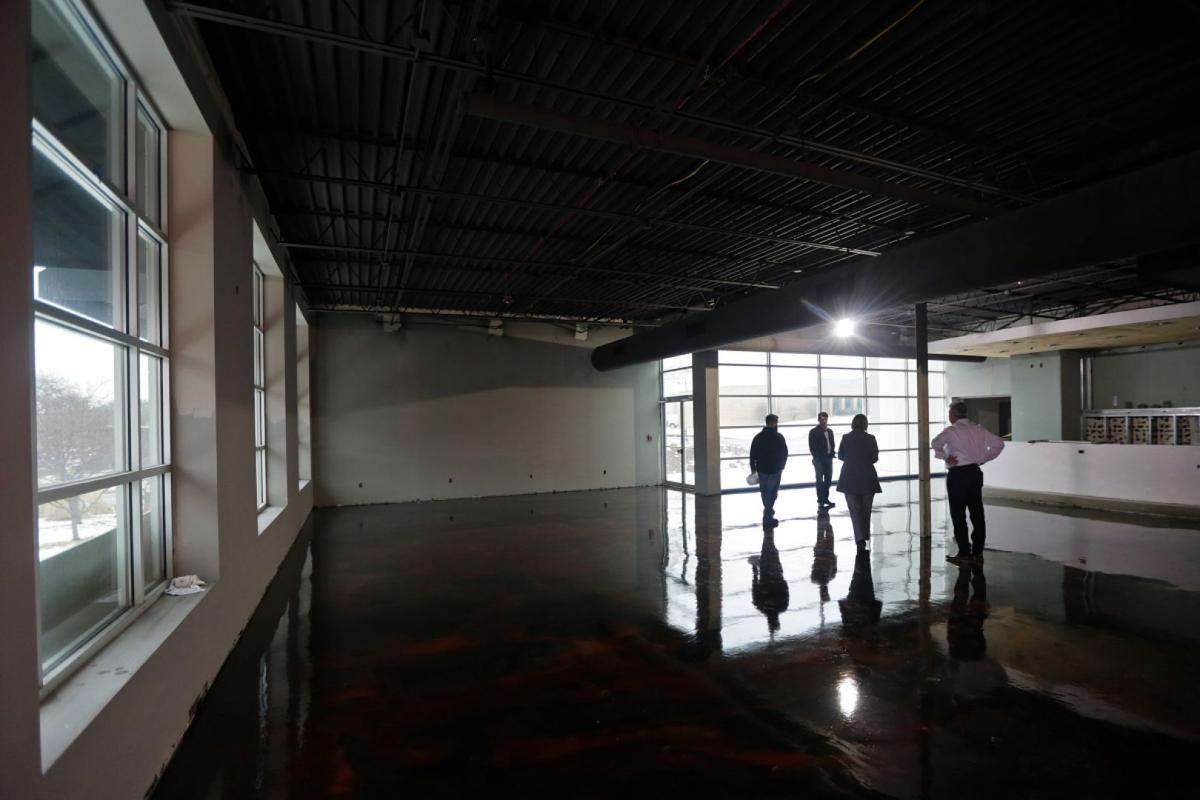 A view of the restaurant and tasting room for O'Fallon Brewery's expansion building on Tuesday, March 3, 2015 in Maryland Heights. Photo by Huy Mach, hmach@post-dispatch.com 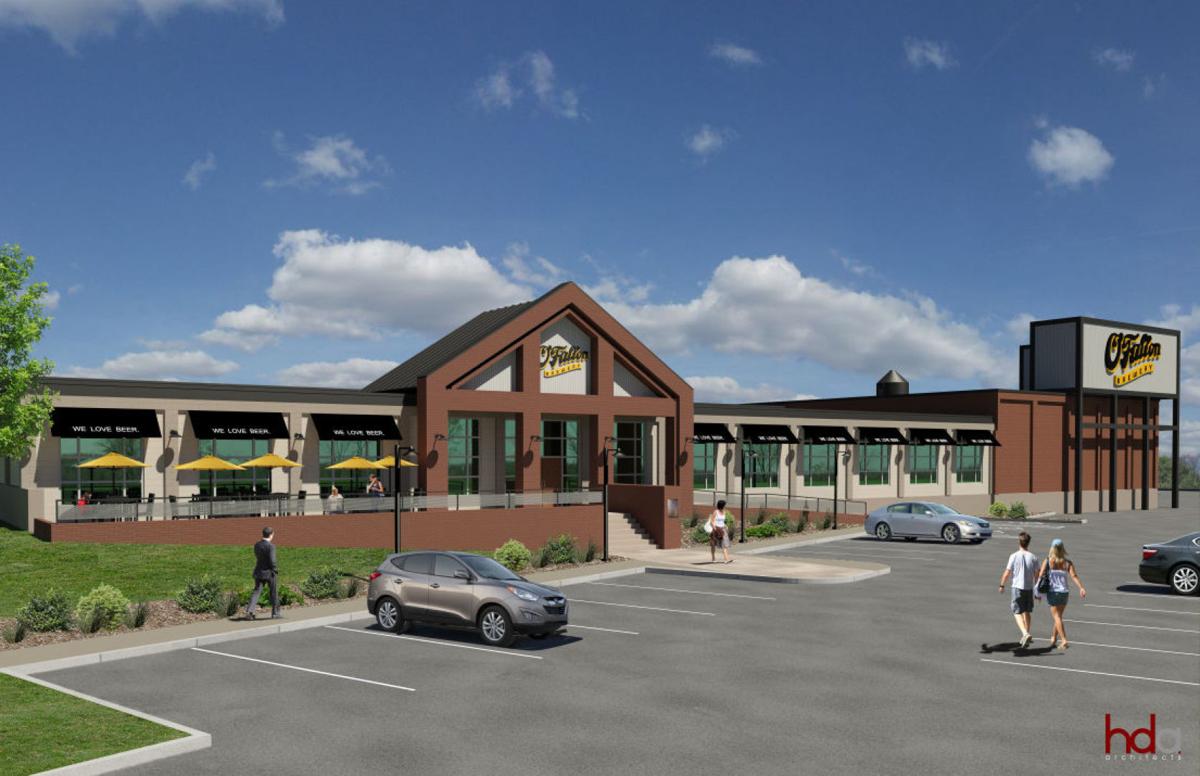 A rendering of the new $10 million O'Fallon Brewery that's set to open May 1 in Maryland Heights.

Jim Gorczyca is getting used to curious neighbors popping their heads into the industrial building he’s transforming in Maryland Heights into a production facility and headquarters for O’Fallon Brewery, one of St. Louis’ largest craft brewers.

As people who work nearby at the Westport Plaza office and retail complex see deliveries of 18-feet-tall stainless steel fermentation tanks, curiosity prompts them to ask when the brewery will open, said Brian Owens, O’Fallon’s Brewery’s head brewer since 2002.

Announced in February 2014, the $10 million project includes a restaurant with seating for 100 and a tasting room. Both are scheduled to open on May 1, with brewing to start on June 1.

Gorczyca, O’Fallon Brewery’s president and CEO, picked the site at 45 Progress Parkway in large part because of the large concentration of employers.

The 39,000-square-foot brewery building, which was formerly home to a medical equipment manufacturer, is located near Interstate 270 and Page Avenue, in an area with several large employers, including Edward Jones.

“This is a great location with so many businesses in the area, and 22 hotels nearby,” Gorczyca said. “We didn’t want to go downtown where there are many other breweries.”

With its location in west St. Louis County near a major interstate, Gorczyca said the new facility will draw from a wide pool of customers in the region.

Maryland Heights Mayor Mike Moeller said the brewery will fill a void. “It’s certainly going to bring jobs to the area and growth to the city,” Moeller said. “There’s nothing else like that there.”

The brewery and restaurant will employ about 45 people when it opens, up from about 10 current employees.

Opening the new brewery will allow O’Fallon Brewery to bring all of its production back to the St. Louis area. As sales outpaced its capacity at its small brewhouse in O’Fallon, Mo., that can only brew a few thousand barrels annually, the brewery shifted production of most of its beer in 2008 to a contract brewer in Wisconsin.

The new facility will also allow O’Fallon Brewery to bottle more of its beer that’s currently only available on draft, such as its Strawberry Best American wheat seasonal beer that will debut in bottles this year for the first time.

Gorczyca designed the new brewery to have everything that his existing brewery in O’Fallon, Mo., lacks. No tours are offered there — it’s too small to accommodate large groups of visitors.

“For 15 years, O’Fallon Brewery has produced great beer but was missing the ability to connect with customers and with the brewing process,” Gorczyca said. The CEO was head of marketing for Anheuser-Busch in Europe in the mid-2000s and bought O’Fallon Brewery in 2011 from its founders, Tony and Fran Caradonna.

When the new brewery opens, public tours will be available. A new 5-barrel pilot brewery that will be added in the Maryland Heights brewery will also allow O’Fallon Brewery to develop small batches of beer that visitors can sample in the tasting room and provide feedback on the taste.

“We’ll get feedback that we never had before without the pilot brewery,” Owens said.

This kind of interaction with brewers is a popular model for growing craft brewers, said Julia Herz, craft beer program director for the Brewers Association, a Colorado-based trade group that defines craft brewers as independent and traditional brewers that produce 6 million barrels or less of beer annually.

“Breweries are a destination,” Herz said. “They’re places customers can go to get fresh beer at the source and talk to brewers behind their favorite brands.”

One beer that will be available on draft at the tasting room later in the year, Owens said, is Maple Bacon Dopplebock, a beer with 10 percent alcohol by volume that’s aged in cognac barrels. The brewery still has to move more than a dozen beer barrels filled with aging beer — which each weigh more than 300 pounds — from O’Fallon to Maryland Heights.

Gorczyca said he’s still evaluating whether he’ll keep the 7,000-square-foot facility the brewer leases in O’Fallon open. “It hasn’t been decided yet, but we will continue to brew there throughout the summer,” Gorczyca said.

This week, one of O’Fallon Brewery’s most expensive pieces of equipment was delivered — a $250,000 centrifuge that helps clarify the beer by removing yeast.

The equipment deliveries are “like Christmas in March,” Owens said — they’re coming at a more rapid clip now as opening nears. “As you scale up, it’s more and more important to ensure consistency and quality.”

“We’re investing a significant amount of money,” Gorczyca said. “All of this will allow us to keep beer as fresh as possible, as long as possible. This is an exciting time for us.”

The brewery will open to the public June 22 at 5 p.m. following a ribbon cutting

A Michigan craft brewer is buying the brewery's old equipment in O'Fallon.

The King Louie's Toffee Stout is the first time the O'Fallon Brewery has offered a co-branded beer.

New facility near Westport Plaza will allow brewery to produce 25,000 barrels a year.

A view of the bottling area of the nearly completed O'Fallon Brewery's expansion building on Tuesday, March 3, 2015 in Maryland Heights. Photo by Huy Mach, hmach@post-dispatch.com

A view of the restaurant and tasting room for O'Fallon Brewery's expansion building on Tuesday, March 3, 2015 in Maryland Heights. Photo by Huy Mach, hmach@post-dispatch.com

A rendering of the new $10 million O'Fallon Brewery that's set to open May 1 in Maryland Heights.