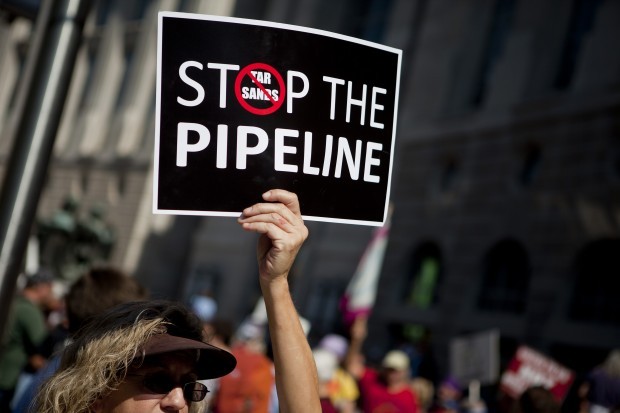 A woman holds up a sign protesting the Keystone XL pipeline outside of a State Department public hearing in Washington in October 2011. Bloomberg photo by Andrew Harrer. 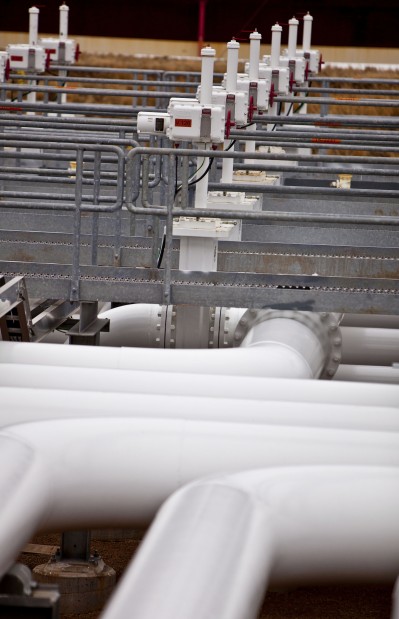 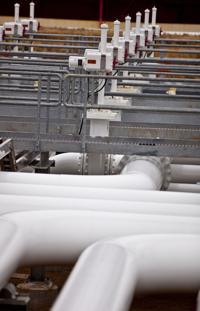 Oil pipelines run underneath manifolds at the Enbridge Inc. Cushing Terminal in Cushing, Oklahoma, U.S., on Friday Feb. 24, 2011. Oil in New York surged to a 29-month high of $103.41 a barrel on Feb. 24 as Libyan leader Muammar Qaddafi vowed to crush an uprising that threatens his 42-year rule. Photographer: Shane Bevel/Bloomberg

On a field just north of this tiny farm town along Missouri Highway 15, about 60 miles of pipe is stacked neatly in four rows that stretch almost as far as the eye can see.

In the coming months, the hundreds of pieces will be strung together as part of Enbridge Energy Co.’s Flanagan South Pipeline, a new 589-mile artery that will transport heavy Canadian oil through the nation’s midsection.

The Flanagan South line will link the Flanagan oil terminal an hour and a half southwest of Chicago with a crude oil hub at Cushing, Okla. From there, other pipelines can move oil south to the nation’s refining capital on the Texas coast.

Calgary-based Enbridge says the 36-inch diameter Flanagan South Pipeline will run diagonally across 11 Missouri counties from just north of Hannibal to Bates County, about an hour south of Kansas City. For most of the route, it will run alongside the 60-year-old Spearhead Pipeline, also owned by Enbridge.

At $2.6 billion, the project is enormous in its own right. But it represents just a piece of Enbridge’s broader plans to expand capacity for moving hundreds of thousands of additional barrels of oil a day from western Canada’s tar sands and the Bakken formation in the northern Great Plains to Gulf Coast refineries where it can be made into gasoline, diesel and chemicals.

Another Enbridge expansion, the Southern Access Extension, would connect the same Flanagan terminal with a storage hub 165 miles to the south in Patoka, Ill., about 75 miles east of St. Louis. Enbridge is also working with another company to develop a separate oil pipeline from Patoka to the Louisiana coast by converting parts of an existing natural gas pipeline.

Still, as ambitious as Enbridge’s plans are, Flanagan South and the other pipeline projects in the Midwest haven’t generated a fraction of the public backlash as the contentious Keystone XL Pipeline, which has drawn massive protests and hundreds of thousands of public comments while the oil industry and environmental groups await a decision by the Obama administration.

In fact, work on the Flanagan South Pipeline is already beginning, less than two years after Enbridge formally committed to the project. By contrast, the northernmost and most controversial piece of Keystone XL pipeline from Alberta to Steel City, Neb., has yet to move forward five years after it was proposed.

Still, for all the differences between the projects, critics say the same concerns exist with both. Among them are risks that a spill could foul water supplies; the greenhouse gas contributions of producing, processing and burning the heavy oil from Canada’s tar sands; and the destruction caused by extracting the tarlike petroleum from a mix of sand and clay beneath Canada’s boreal forest.

What’s more, environmental groups contend that the permitting process used for the Flanagan South Pipeline doesn’t require a comprehensive environmental analysis or allow for public input — a significant reason why so many who live in areas affected by the project know few details about it.

“A lot of the people we’ve talked to along the pipeline route have been pretty surprised to learn there’s a pipeline three quarters the size of Keystone XL in their backyard,” said Doug Hayes, a Sierra Club lawyer in Boulder, Colo.

Just over a week ago, the Sierra Club sued the Corps of Engineers in federal court in Washington for failing to provide access to application materials provided by Enbridge under the Freedom of Information Act. The St. Louis-based Missouri Coalition for the Environment filed a similar lawsuit a day later.

On Friday, the Sierra Club and National Wildlife Federation filed an amended lawsuit against the Corps of Engineers and four other federal agencies with responsibility for approving the pipeline for failing to analyze the project’s environmental impact.

Under the Clean Water Act, projects that involve dredging or filling of rivers, streams or wetlands require approval from the Corps of Engineers. In some cases, projects deemed to have minimal environmental impact qualify for general permits called nationwide permits that can be issued on an expedited basis.

The Flanagan South Pipeline has been authorized by three Corps of Engineers districts, including St. Louis, under Nationwide Permit 12, a general permit for utility projects that result in no greater than a half-acre of wetlands loss.

Hayes, the Sierra Club lawyer, said the use of Nationwide Permit 12 was improper for the Flanagan South Pipeline and violates the intent of the Clean Water Act by treating each of the pipeline’s 2,000 or so stream and river crossings as individual projects.

In Missouri alone, Flanagan South construction is estimated to “permanently and temporarily impact approximately 62,840 linear feet of stream equaling an area of 24.91 acres and approximately 38.23 acres of wetland,” the Missouri Department of Natural Resources said in a letter to Enbridge in April. The pipeline would also cross eight streams that already fail to meet federal Clean Water Act standards.

Lorin Crandall of the Missouri Coalition for the Environment said many of the water crossings in Missouri are also sources of drinking water, a reason why people across the state — not just landowners along the pipeline route — should be concerned about the Flanagan South project.

That’s especially true given that Enbridge is the same company responsible for the 2010 spill in Michigan that released 840,000 gallons of diluted bitumen into the Kalamazoo River. Diluted bitumen is a mix of heavy Canadian crude oil mixed with chemicals that allow it to flow through pipelines. Three years later, the cleanup from the disaster still isn’t complete.

Corps of Engineers spokesman Gene Pawlik said the agency doesn’t comment on pending litigation. But, he said, oil and gas pipelines in general are among the projects authorized under Nationwide Permit 12.

But Enbridge spokeswoman Katie Lange said the company has been more than forthcoming with information about the project since making initial contact with landowners and elected officials in January 2012 when the company committed to build the pipeline. The outreach efforts included eight open houses across the pipeline route in April 2012 and four more this summer.

Lange also said Enbridge has faced up to its role in the Kalamazoo River spill and instituted sweeping changes.

“We walked away with egg on our face, and there are definitely lessons that have been learned from that,” she said. “The improvements that we have made to the system are more than I can even list.”

Enbridge prefers to tout what it says are the benefits of the pipeline, including additional North American oil production to the Gulf Coast, home to the majority of U.S. refining capacity, millions of dollars in property and sales tax revenue and thousands of temporary construction jobs along the pipeline route.

Missouri Gov. Jay Nixon and Sens. Claire McCaskill and Roy Blunt enthusiastically endorsed the pipeline. Nixon, in fact, pledged to do what he could to expedite state approval.

Local officials in rural counties where the pipeline will pass through have been equally enthusiastic.

Glenn Eagan, presiding commissioner in Shelby County, where Enbridge has staged 60 miles of pipe, said the Missouri Tax Commission estimated the pipeline will yield almost $1 million a year in new property tax revenue for the county when it’s fully operational.

That represents about a 20 percent increase from the $5 million or so the county, located about currently generates in property taxes, with 70 percent or more of the additional money going to local schools. The county’s road and bridge fund and general fund should each get an additional $60,000, money that can be used on road repairs or do work on the county courthouse.

“It’s awesome for the county, it really is,” Eagan said.

The 485-mile pipeline will carry up to 700,000 barrels per day from Cushing to Houston.

It's expected to start Flanagan South, its 600,000 barrel-a-day line that crosses the Midwest, this year.

In Missouri, Obama cites better economy, but says more must be done

He pledges a stronger commitment to tackling the economic woes that strain many in the middle class.

Group says pipeline will restrict oil supplies in the U.S. as exporting to other countries picks up.

A woman holds up a sign protesting the Keystone XL pipeline outside of a State Department public hearing in Washington in October 2011. Bloomberg photo by Andrew Harrer.

Oil pipelines run underneath manifolds at the Enbridge Inc. Cushing Terminal in Cushing, Oklahoma, U.S., on Friday Feb. 24, 2011. Oil in New York surged to a 29-month high of $103.41 a barrel on Feb. 24 as Libyan leader Muammar Qaddafi vowed to crush an uprising that threatens his 42-year rule. Photographer: Shane Bevel/Bloomberg