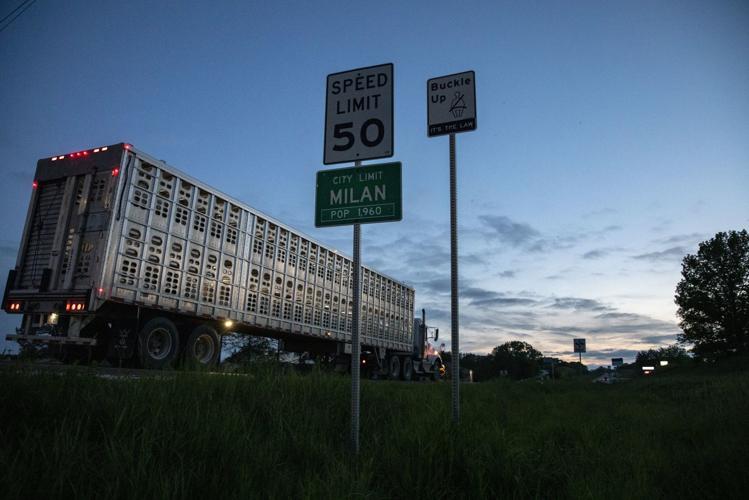 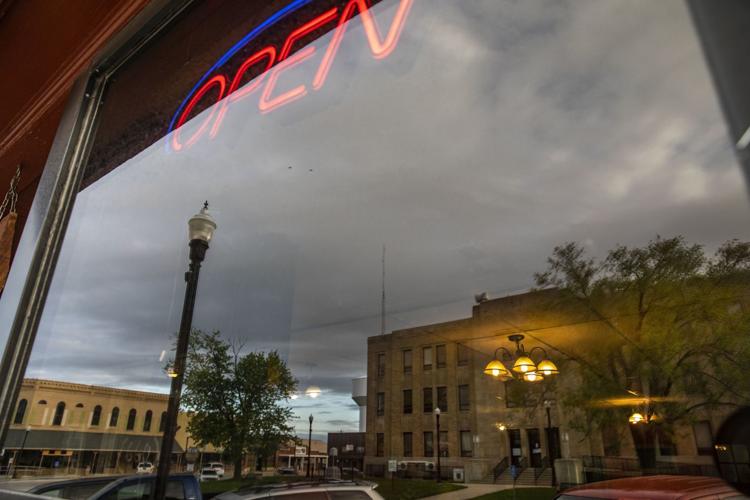 Milan City Hall and a cloudy sky are reflected in the window of the Mi Tierra restaurant in the small Missouri town on Thursday, May 21, 2020. (Colter Peterson, cpeterson@post-dispatch.com.) 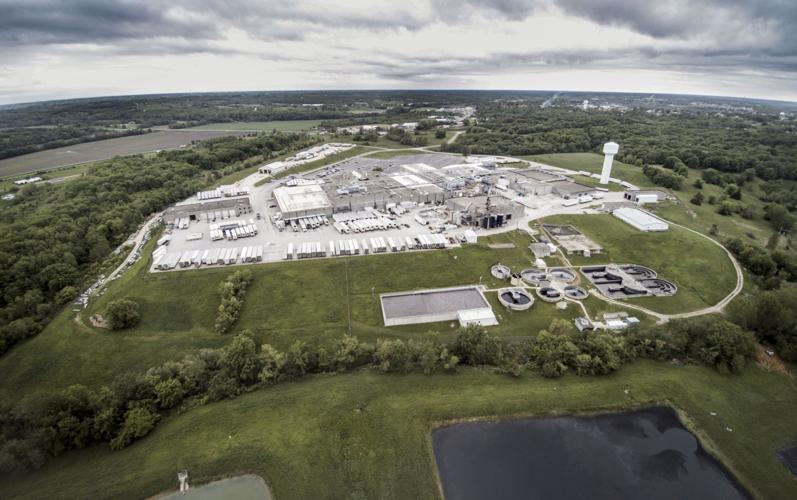 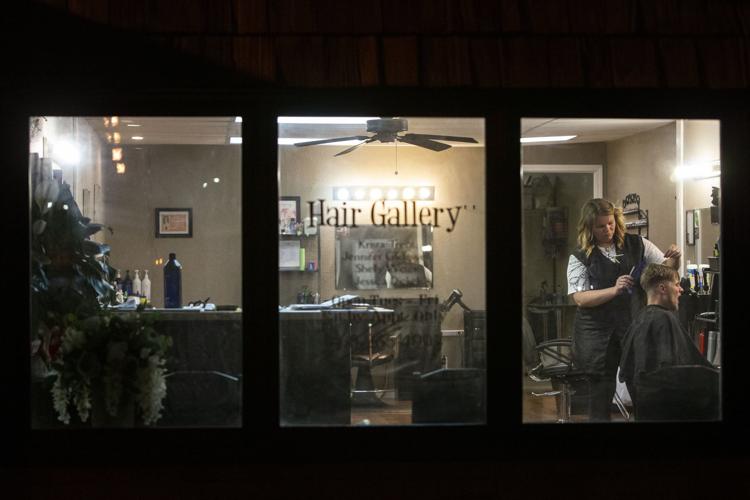 Krista Trent cuts the hair of her nephew Ian Owen Logan around 10:40 p.m. at the Hair Gallery in Milan, Missouri, on Thursday, May 21, 2020. Trent has been working long hours trying to get caught up with customers who haven't had a hair cut since the coronavirus pandemic shut down the state for several months. (Colter Peterson, cpeterson@post-dispatch.com)

MILAN, Mo. — The fortunes of this small northern Missouri town are tied squarely to meat.

Smithfield Foods, the largest pork producer in the U.S., runs a slaughterhouse and processing plant in the rolling hills here, where more than 10,000 hogs typically are butchered in a single eight-hour shift.

The plant is the local economic anchor and has brought new residents — many of them immigrants — to Milan, helping the 2,000-person town last, even as other rural communities fade.

But now meatpacking plants across the country are getting hit by the new coronavirus. Thousands of workers are testing positive. Some are dying. And that has left some in Milan unsettled.

Workers say they labor shoulder to shoulder, without mandatory or coordinated testing, and have sued Smithfield. Milan residents aren’t sure what to make of it. Some trust plant officials are doing their part to control transmission — installing plastic dividers between workers and checking worker temperatures, among other precautions.

“I feel like they’re doing a fine job,” said a masked Krista Trent, co-owner of the Hair Gallery, a salon on the square at the center of town. “What else are you supposed to do?”

“If you do testing on a plant, it shouldn’t be voluntary,” said Donna Elder, who handles payroll and tax processing for Sayre and Associates, in a downtown Milan office.

For weeks, Milan and all of Sullivan County were lucky, notching but two cases by mid-May. Then Smithfield officials started testing workers. And case numbers began to rise.

“We had zero just 2½ weeks ago, or so,” Milan City Administrator Fred Ventresco said in a May 22 interview. “They’ve been going up ever since they’ve been testing the plant over there.”

As of Friday, county officials had reported 58.

Keene said none of those people has been hospitalized. Still, the count gives Sullivan County, with just 6,000 residents, the second-highest infection rate in Missouri — trailing only Saline County, where there also is a major meat-processing plant.

Keene said he is “very comfortable” with the safeguards Smithfield officials have enacted at its plant.

Milan was at risk of dissolving into an aging, depopulated dot on the map before the mid-1990s, when the meat plant was built, residents say. The 250,000-square-foot facility began production with 400 employees in September 1994, under the ownership of Premium Standard Farms. It was acquired by Virginia-based Smithfield in 2006.

Today, residents and leaders almost universally recognize it as the lifeblood of the local economy. Pay starts at $17 an hour, residents said — Smithfield officials did not agree to an interview — and workers can earn $40,000 to $50,000 per year.

But the work is punishing. Workers are on their feet all day. The cut line moves quickly. And repetitive-motion injuries are common as workers process thousands of loins, for example, a day. Many immigrants fill the jobs, primarily those from Latin American and African countries.

And the community generally credits that influx for driving growth that would not have occurred otherwise.

“That’s how come we’re building a new part on our school,” said Anita Smith, who runs Milan’s only hotel, Hotel Stanley, with her husband, Terry.

“I’d say they’re keeping the town alive,” she said of the plant.

Hispanic churches have popped up in town store fronts. Two taquerias sit on the south side of the town square; a Mexican grocer, across from the courthouse.

Crystal Brinkley, a local school board candidate who helps on her family’s Angus beef farm and worked in former Missouri Gov. Jay Nixon’s administration, said residents have “respect and admiration” for plant employees, given the risks they face.

“The economic backbone of this community is right there, up on the hill,” she said. “Everyone in these small, rural communities are essential.”

But lately, many plant employees have been missing work, said Axel Fuentes, a local organizer for the Rural Community Workers Alliance, which advocates for improved working conditions at the Smithfield facility. Some have tested positive. Others have coronavirus symptoms or are quarantined because they’ve been in close contact with those infected.

The plant has been running with only 50% to 60% of its typical workforce, Fuentes said.

“If half of the workforce is showing up to work, that shows you a lot,” Fuentes said.

Worse, those employees keep working until they get their test results, he said.

“That’s the problem,” he added. “In that time, they passed the virus to who knows how many workers.”

Three plant workers agreed to in-person interviews with the Post-Dispatch on the condition of anonymity, fearing retaliation from Smithfield officials.

They said testing remains voluntary for workers. Locker rooms and other parts of the plant are still crowded, they said, and that bonus pay offered to employees who do not miss any shifts can provide dangerous incentives for people to work even if they might have the virus.

They are also frustrated: On one hand they’re hailed as essential — just a month ago, President Donald Trump ordered meatpacking plants to remain open. On the other, they are left exposed to the virus, and feel like “monsters” in their own families, whom they threaten to infect.

In April, Milan workers filed suit against Smithfield, arguing the facility was a public nuisance because of a lack of coronavirus protections for employees.

“I fear what will happen to me if Smithfield finds out I am participating in this suit,” wrote an anonymous worker whose description of working conditions was at the heart of the case. “However, I am more fearful of the risks Smithfield is creating for me, my co-workers, friends, neighbors, the Milan area, Missouri, and the country as a whole.”

A federal judge in Kansas City dismissed the suit May 5, citing “significant” steps Smithfield officials had taken to protect workers, and ruling that the federal government, not the courts, oversees workplace safety. Moreover, he said, there were no confirmed cases of COVID-19 at the plant then — meaning an “immediate threat” had not been established at the time.

Fuentes said the suit helped produce some changes to protect against coronavirus transmission. He said the Smithfield plant was “just running normally” until the suit was filed, and only after that point did the company begin to adjust its practices.

But Fuentes and workers said most still believe that not enough has been done. Smithfield officials now are requiring a doctor’s note, they said, to get paid leave.

Meanwhile, workers at plant after plant have fallen to the virus.

In Milan, some workers say that shutting down the plant for a couple weeks to try to quash the virus — or at least gain control of it — might be necessary. One said workers would be willing to forgo pay during such a hiatus.

But town residents, even those concerned by the outbreak, are protective of their plant.

“That plant has to be there,” said Elder, in the tax office downtown. “If it came down to shutting down the plant to stop the virus, I don’t think a lot of people would be behind it.”

“It’s not Smithfield’s fault,” said Smith, the hotelier, “that the COVID is in here.”

Smithfield, a major producer in Missouri, denied liability in agreeing to settle, and believed its conduct was always lawful.

Safety concerns have made it harder for the companies to hire and retain workers at a time when labor is already scarce and demand is booming.

Missouri and the Biden administration have sided with pork producers; Illinois is aligned with California.

The Bottom Line: Can St. Louis break out of its slow-growth trend?

The Bottom Line: Can St. Louis break out of its slow-growth trend?

Why you should pay attention to bonus offers from banks

Why you should pay attention to bonus offers from banks

Save time and money during the holidays with these apps

Save time and money during the holidays with these apps

Milan City Hall and a cloudy sky are reflected in the window of the Mi Tierra restaurant in the small Missouri town on Thursday, May 21, 2020. (Colter Peterson, cpeterson@post-dispatch.com.)

Krista Trent cuts the hair of her nephew Ian Owen Logan around 10:40 p.m. at the Hair Gallery in Milan, Missouri, on Thursday, May 21, 2020. Trent has been working long hours trying to get caught up with customers who haven't had a hair cut since the coronavirus pandemic shut down the state for several months. (Colter Peterson, cpeterson@post-dispatch.com)