As plastic pollution soars — filling waterways, air, soil and living things with the material — some in St. Louis are joining efforts to confront the crisis through new approaches.

Experts hope the shifting strategies — which include harnessing crowd-sourced data to learn more about what kind of waste accumulates and where — could result in better policy interventions and ultimately help spark widespread reevaluation of who shoulders the burden of plastic waste. That means potentially pushing greater responsibility toward producers, instead of leaning on consumers to constantly clean up the mess as disposable, single-use plastic proliferates.

“We’re trying to figure out what’s ending up on the ground, so that we can prevent it,” said Jenna Jambeck, a University of Georgia engineering professor who researches plastic waste issues.

Lately, Jambeck has focused on the Mississippi River basin. She is involved with an initiative that recently enlisted St. Louis-area volunteers to record the types of litter they picked up during a cleanup event and the precise location of where they found it. The results were fed into an online “Debris Tracker” database that Jambeck helps run alongside partners like the National Geographic Society. The work helps establish a baseline map of the litter.

Researchers ran pilot cleanup events this spring in St. Louis; St. Paul, Minnesota; and Baton Rouge, Louisiana, and aim to expand to other cities along the Mississippi in the future.

As a data collection bonus, researchers put tracking devices in a handful of plastic bottles and released them into the river at North Riverfront Park to shed light on how plastic waste moves along the corridor. The bottles tended to get stuck along the banks, among docked barges. But after a slow start, one of them covered 880 miles over 11 days, before being scooped up by a Louisiana fisherman near Baton Rouge. He contacted the researchers, as requested on a message with the bottle.

“I was just in disbelief,” said Jambeck. “Our hypothesis is it basically hitchhiked on a barge.”

Another local effort has positioned “trash traps” in urban streams and waterways, thanks to the Environmental Protection Agency’s Trash-Free Waters program, and partners including Wichita State University and some groups focused on water quality issues around the St. Louis region. Those tending the colorfully nicknamed traps — such as the “Trash Trout” in Maplewood’s Deer Creek Park and “Litter Gitter” in University City’s Heman Park — aim to quantify the junk they collect, while trying to control plastic headed for the Mississippi River, or beyond.

“You’re just surprised at how much stuff is washed down the creek sometimes,” said Josh Wilson, who cleans out the traps through his involvement with Blue2Blue Conservation, a group he co-founded and runs in his spare time. “It’s just really, really disheartening.”

The plastic-targeting efforts in the region take aim at a problem spiraling to an alarming scale and ubiquity.

But it’s not just an affliction confined to bodies of water or to single-use plastic. One study published in the journal Science last year said that “even the most isolated areas in the United States — national parks and national wilderness areas — accumulate microplastic particles after they are transported there by wind and rain.” Most of that material comes from synthetic microfibers used in clothing.

Many say the new and growing scale of the world’s “plastification” requires new methods of troubleshooting. Old tactics, like simply relying on volunteer trash pickups, “aren’t going to hack it anymore,” said Wellenkamp. His group helped coordinate the recent “Debris Tracker” work in the Mississippi watershed. The goal is for tactics like the crowd-sourced data collection to reveal the best opportunities for systemic change.

Those overseeing the data collection are hoping to identify where most plastic debris collects, where it comes from, and how it moves around. They also aim to identify the brand names on the trash, to see “whose stuff makes up the majority of what we’re discovering,” Wellenkamp said.

Already, data on the most common forms of plastic junk are coming into focus, from the recent “Debris Tracker” cleanups — with items like cigarette filters, beverage bottles, and food wrappers leading the way.

Researchers plan to present some initial findings and policy recommendations to mayors of the three pilot cities at the end of the month.

From that information, the goals are to assess how cities and local governments might be able to most efficiently combat the issue, with the least resources. Another broader goal is to explore how plastic producers can address outflow, which may require economic incentives for post-consumer waste markets, to ensure that reused stuff is cheaper than virgin material.

“We need to do what we can to incentivize that kind of corporate behavior and purchase power to really cut into all this plastic waste that’s piling up,” said Wellenkamp.

Others agree that the escalating issue demands shifting more accountability to producers. Otherwise, they say there’s a sense of futility — like the Greek myth of Sisyphus, forever pushing a boulder — as well-intentioned groups and individuals are condemned to an endless loop of cleaning up trash, only to have their work negated by an increasing cascade of single-use plastic.

That growing realization has helped spark goals, and grants, geared toward “preventing more, (and) picking up less,” said Jenny Wendt, a senior project manager in University City’s Department of Public Works, and a plastic waste reduction campaign manager for the Mississippi River Cities and Towns Initiative.

“Something actually has to change,” agreed Rachel Bartels, a representative of Missouri Confluence Waterkeeper, another group overseeing the St. Louis-area trash traps. “There’s only so much we can do as consumers.”

At the industrial level, the potential for change could be consolidated in a relatively small set of hands. For example, a report published last month found that just 20 companies — including ExxonMobil and Dow — produce more than half of the globe’s single-use plastic.

Experts like Jambeck agree that conversations about plastic waste seem to be pivoting more toward producers than in the past. And despite immense challenges, she touts signs of progress. Scientifically, for instance, the issue now receives far more attention than it did even a decade or two ago. She and others also point to the fact that some plastic waste has value as a raw material, which can help reduce pollution.

“I know that the (plastic) production curve is daunting, but the right kinds of conversations are starting,” said Jambeck. “That does make me optimistic that we’re going to get a handle on it. ‘Cautiously optimistic,’ is the right way to put it.”

Construction is expected to begin in the fall on the project, part of a $100 million plan to transform Augusta wine country into a national destination. 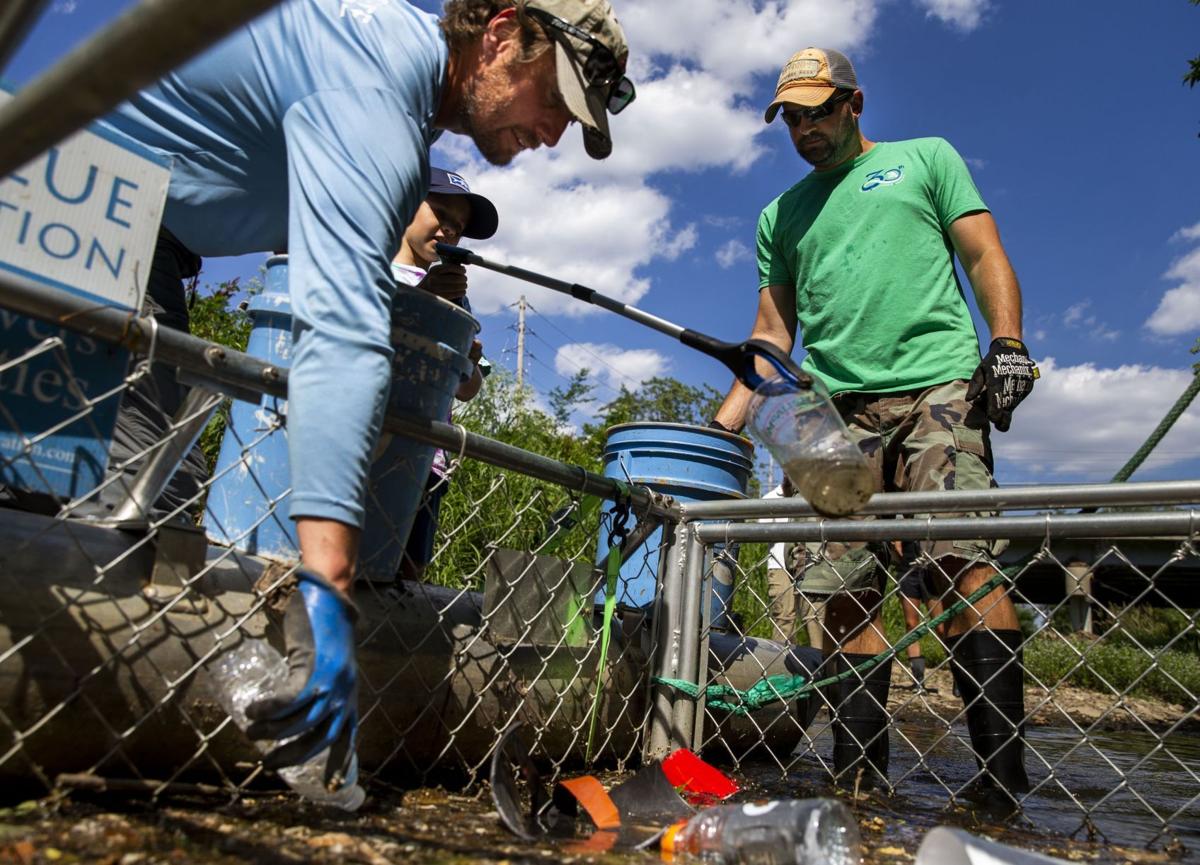 From left, Josh Wilson, co-founder of Blue2Blue Conservation, Ivy Bartels, 9, and volunteer Mark Fingerhut clean out the Trash Trout trash dam on Deer Creek near Deer Creek Park in Maplewood on Tuesday, June 15, 2021. Wilson founded Blue2Blue Conservation with his wife, Leah Wilson, after spending over a year living on a sailboat in the Caribbean and seeing how much trash is floating in the sea there. Photo by Colter Peterson, cpeterson@post-dispatch.com 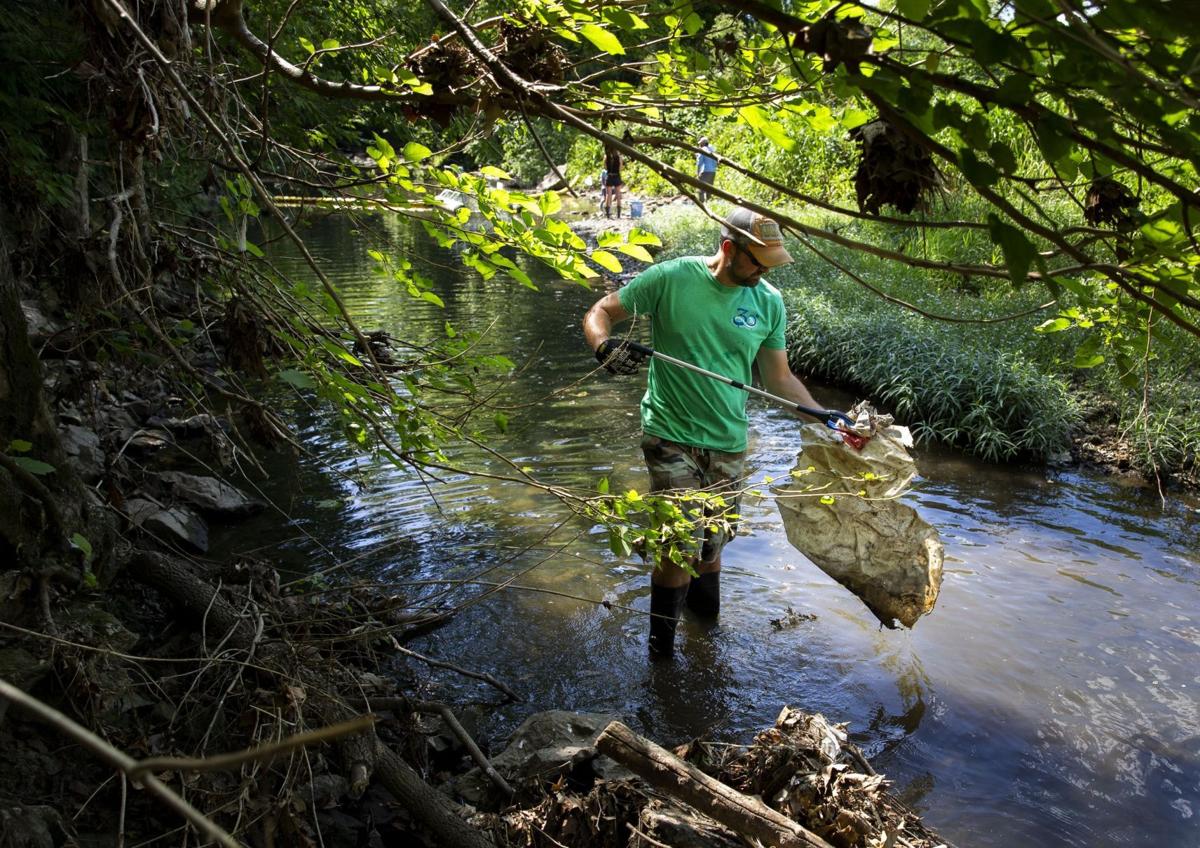 Volunteer Mark Fingerhut picks up trash downstream of the Trash Trout trash dam on Deer Creek near Deer Creek Park in Maplewood on Tuesday, June 15, 2021. Blue2Blue Conservation worked with the Missouri Confluence Waterkeeper organization to get the floating trash dam installed. The dam floats on the surface collecting trash that gets washed down the creek while fish and other water creatures can swim below. Photo by Colter Peterson, cpeterson@post-dispatch.com 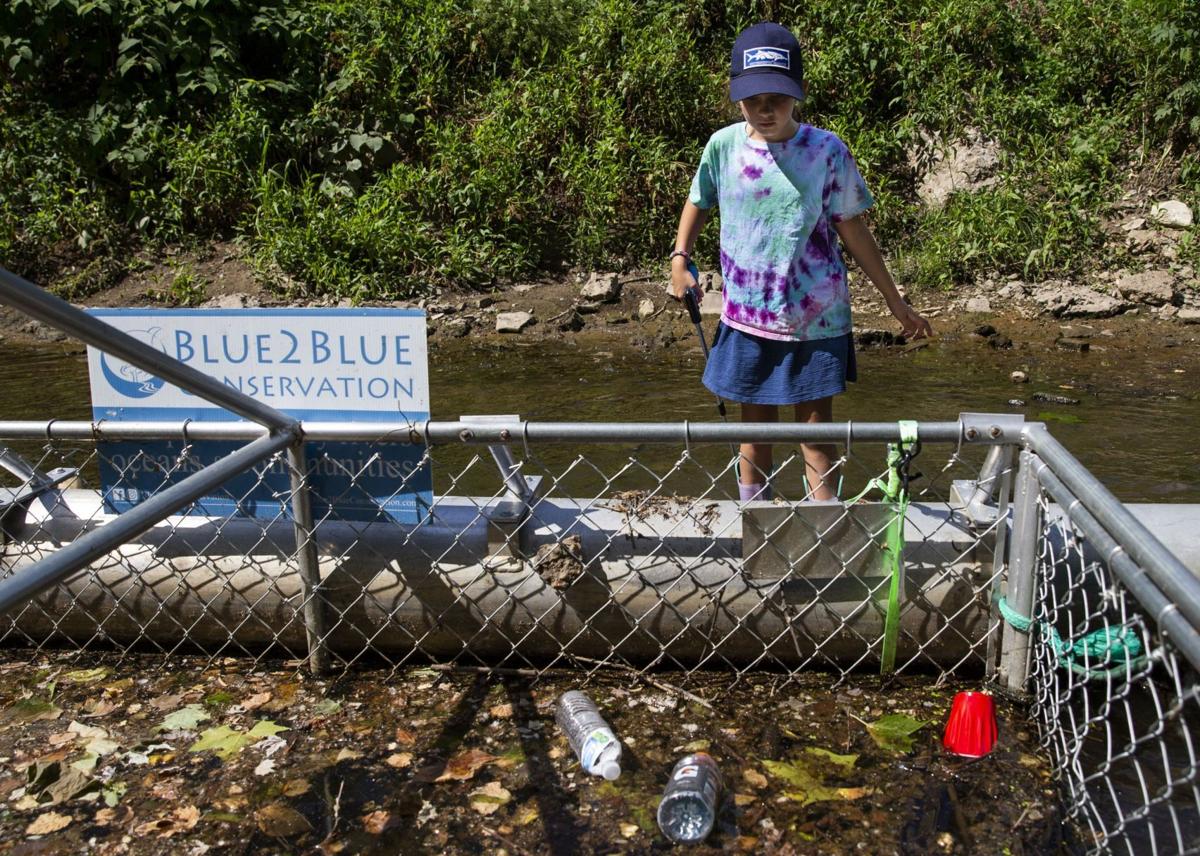 Ivy Bartels, 9, looks at the trash stoped by the Trash Trout trash dam on Deer Creek near Deer Creek Park in Maplewood on Tuesday, June 15, 2021. Blue2Blue Conservation worked with the Missouri Confluence Waterkeeper organization to get the floating trash dam installed. The dam floats on the surface collecting trash that gets washed down the creek while fish and other water creatures can swim below. Photo by Colter Peterson, cpeterson@post-dispatch.com