ST. LOUIS • Secured by decades of future taxes from Cardinals fans, investors clamored last week for the bonds that would help to finally put the “village” in Ballpark Village.

About $105 million in St. Louis Industrial Development Authority bonds had been expected to be issued publicly, part of a financing package a year in the making for the entertainment venue next to Busch Stadium. Demand for the bonds was so great, investors submitted some $1 billion in offers to St. Louis-based Stifel, the city’s bond underwriter for the project.

Now, downtown’s first new office building in 30 years, a new hotel and a 29-story apartment tower are expected to break ground before the year is out.

As the bonds hit the market, details of the complex financing package — and the significant amount of future tax revenue that has been pledged to it — have come into focus. At the same time, the Cardinals and their co-developer, Baltimore-based Cordish Cos., have offered new details to investors about future tenants and how Ballpark Village’s Phase II would compete in the marketplace.

As has been rumored, Cordish confirmed that PricewaterhouseCoopers, one of the “Big Four” accounting firms, has a letter of intent to move into the new office building planned for the corner of Clark and Eighth streets. It currently operates its St. Louis office out of the Bank of America Plaza, also downtown.

Other potential tenants, Cordish has told prospective investors, include a huge fitness facility, Onelife Fitness, that would take up the majority of a new retail building just east of the office structure. Wahlburgers, the burger chain owned by actor Mark Wahlberg and his family, is in negotiations to fill space in the existing Ballpark Village structure that opened in 2014, according to bond documents.

The public’s contribution to the project is significant. If Cordish and the Cardinals hit development targets outlined in their agreement with the city, nearly $72.7 million from bond proceeds backed by tax dollars could go to the $261 million second phase, almost 30 percent of the costs.

That’s up from the $65 million figure cited last year during debate to amend the city’s development agreement with the Cardinals and Cordish, when the project was projected to cost only $220 million.

The city’s economic development director, Otis Williams, said that’s because the project got larger, boosting office and retail square-footage and adding a 216-room Live! by Loews-St. Louis hotel that wasn’t originally part of the package. That means projections are now higher for the sales taxes, earnings taxes and property taxes the project generates to pay back bondholders.

“There have been increases all across the board on almost every function,” Williams said.

But the subsidy is only what bond proceeds will provide to the financing package put together by the developers. Including interest payments, it will cost a projected $175 million over 20 years, money generated from taxes at Ballpark Village, to pay down the bonds.

Some of that money comes from new state taxes generated by the development. Some will be from two special sales tax districts that can each charge up to a 1 percent tax on purchases in the footprint. Much of the revenue will come from city tax revenue generated by the new venues.

Like tax increment financing, commonly called TIF, supporters say the redirected taxes never would have been generated absent the new development. Conservatively, about 800 jobs are expected to be added in the second phase, Williams said. A study from planning firm PGAV Planners estimates a $34.5 million annual payroll on the site by 2021.

“We also had property that was not performing from a tax perspective,” Williams said. “And so now it will be — and it will be generating more than $2 million in economic activity taxes to the city on an annual basis in the early stages of this project.”

Skeptics, though, question whether a public subsidy was really needed to make the project a reality.

“The question is, would this happen without this? You have to wonder,” said Alderman Cara Spencer, who represents part of south St. Louis and voted against the Ballpark Village incentive package last year.

“I didn’t feel comfortable moving forward with that large of a tax incentive. That’s not to say the Cardinals aren’t a great partner to the city of St. Louis and it’s not going to be a great enhancement to that area. But we’re working with very limited resources here.”

The Cardinals and Cordish, in a statement, said the project would not have been feasible absent the incentive and that the development will serve “as an important catalyst for the further revitalization of downtown.”

The Cardinals and Cordish are financing the rest of the project with $28.4 million in equity and $160 million in debt.

The bonds financing the public piece of the project will also refinance debt used to provide $17 million in incentives for the first phase of Ballpark Village, the retail and restaurant complex that opened in 2014. There are performance measures built into the agreement and the city will retain some $30 million in escrow that the developers won’t be able to access unless they hit certain benchmarks.

The bonds are not guaranteed by the city, so if the development doesn’t perform, it won’t cut into existing revenue streams. Instead, the agreement pledges additional taxes generated from Ballpark Village if the revenue is not performing to expected levels.

“We don’t expect that to be the case,” Williams said.

Spencer, a plaintiff in a lawsuit challenging the city’s financing agreement with the St. Louis Blues for funding to update Scottrade Center, agreed that “with Ballpark Village, there are some checks and balances.”

Bond investors apparently weren’t too concerned about the lack of a public guarantee. There was enough demand, Williams said, that the underwriter cut the interest rate on the bonds, saving some $11 million in payments.

“The results of Wednesday’s pricing of the Phase II bonds, both in terms of the overall demand for the project and the interest rates, are of material benefit not only to Phase II but also to the city as a whole,” the Cardinals and Cordish said in their statement. “Since the announcement of the second phase the overall response from the retail, restaurant, office, hotel and residential markets has been extremely positive and this is a continuation of that positive feedback and another milestone as we move toward the start of construction.”

In a presentation to investors this month, Cardinals President Bill DeWitt III said the first phase of the development has performed to expectations and the ownership group would be happy even with that.

“But our vision was really for the village,” he said.

That vision appears to be on its way. Williams said the city is already in discussions over building permits.

The developers say construction on the 297-unit apartment building and 10-story, 117,000-square-foot office building, as well as the connected hotel, should begin in December. Parking garages in the structure will add almost 1,000 spaces.

The smaller retail building, with about 40,000 square feet, should start work in April but be completed first, in the summer of 2019. The office should finish up around that time, and the Loews hotel in the fall of 2019. The apartment tower will take longest, wrapping up in the spring of 2020.

“There won’t be a building like it in terms of the amenities, in terms of the quality certainly in terms of the location,” Cordish principal Blake Cordish told investors in a bond presentation, describing views into either Busch Stadium or overlooking the redone Arch grounds.

Williams said the apartment building will be a different product for downtown that will draw higher-income people downtown. Missy Kelley, president and CEO of Downtown STL Inc., has heard, too, that the apartments will be some of the nicest in the region.

“My understanding is the apartment building is going to be a level of luxury we don’t currently have downtown,” she said.

Cordish intends to aggressively market it.

“We’re going to come into the market with a product that’s substantially nicer than the rest of the product in the market and a location we think is better, and we’re going to be, you know, 50 cents a square foot lower than the top of the market in Clayton and the Central West End,” Nick Benjamin, Cordish’s vice president of development, told bond analysts.

When the first phase of Ballpark Village opened, some downtown bar and restaurant owners complained that their former customers were now spending their dollars in the new complex. Concerns over how much the second phase will actually attract new business to the city remain.

“Not all tax revenue is newly generated by the project,” Spencer, the alderman, said. “There’s a lot of cannibalization.”

Indeed, the letter of intent from PricewaterhouseCoopers is the starkest example of potential reshuffling. Cordish says the accounting firm will take 40,000 to 50,000 square feet of the office space, according to bond documents.

An analysis from a city economic development analyst before the hotel was added to the project estimated about one third of the tax revenue generated would be revenue that otherwise would have been paid at existing establishments.

Williams said the city is concerned about the substitution effect from the new venue but that it built in conservative estimates and still sees a net gain from the project.

“It would be worse if we didn’t have the new (office) space because the tenants are looking for newer space and so there is a significant need to be able to retain the businesses that we have, otherwise we will continue to just lose,” Williams said. “I do think there’s value in having new product to be able to retain some of the businesses that are currently downtown. But it also offers us the opportunity to attract new business, which will happen.”

Kelley, of the downtown group, acknowledged that the first phase hurt some businesses. But she said other businesses adapted and even benefited. Broadway Oyster Bar, near Busch Stadium, redid some of its building and was able to benefit, she said.

“It’s a significant addition, bringing more life to the area around the ballpark,” Kelley said. “It’s really becoming its own district of sorts.”

The second phase of Ballpark Village, which includes a hotel, office building and apartment tower, will cost $261 million.

To finance the cost, the Cardinals and partner Cordish Companies are providing $28.4 million in equity and $160 million in debt.

In addition, the city of St. Louis Industrial Development Authority was expected to issue about $105 million in bonds, yielding a subsidy for the Cardinals and co-developer Cordish Companies of about $72.7 million.

Including interest payments, it will cost an estimated $175 million over 20 years in taxes generated from Ballpark Village to repay the bonds.

Shark Bar replacing Howl at the Moon at Ballpark Village

The closing dueling piano bar has operated in the downtown entertainment venue since it opened in 2014.

Cardinals say apartment tower 25 percent leased despite opening over a year away; office should be complete by August.

Guess who's coming to Ballpark Village? New tenants include steakhouse and baseball-themed retailer

Hotel to open by March and apartment building expected to be complete by the middle of 2020.

The Bottom Line: The village comes to Ballpark Village

Helped by $70 million in public incentives, the second phase of Ballpark Village is about to become reality. Jim Gallagher and David Nicklaus … 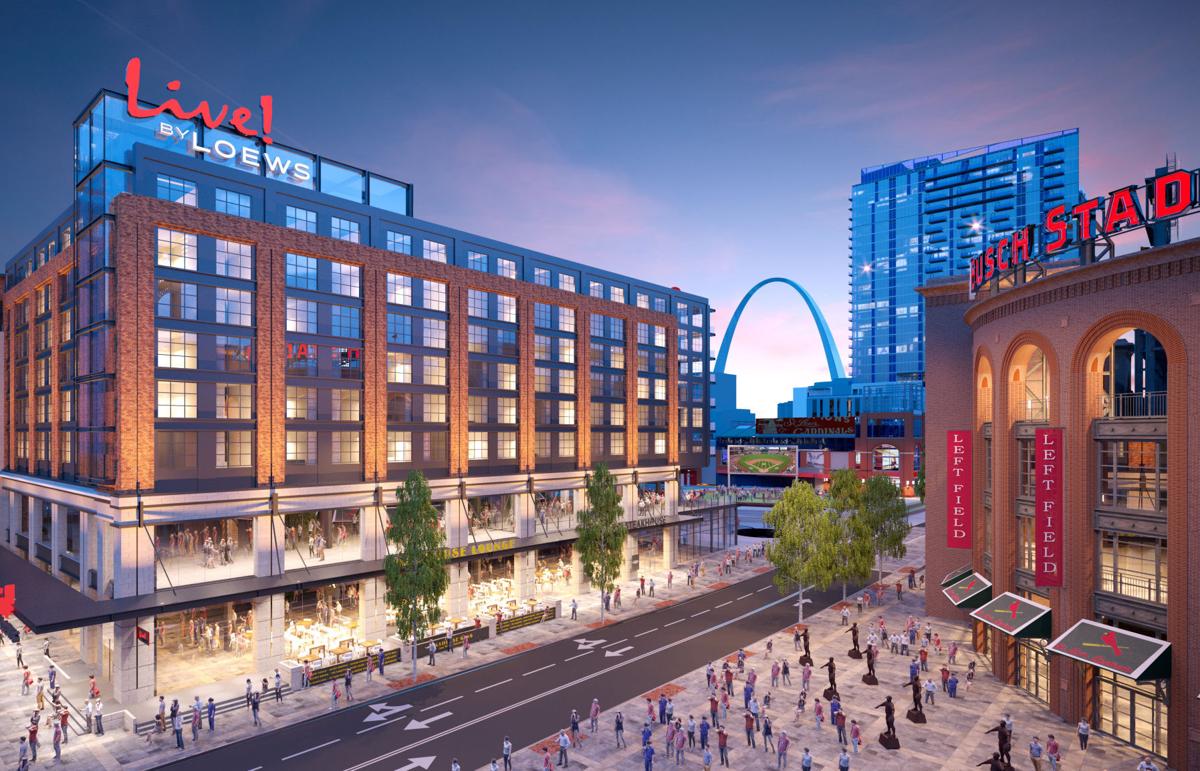 A rendering of Live! by Loews–St Louis at Ballpark Village. 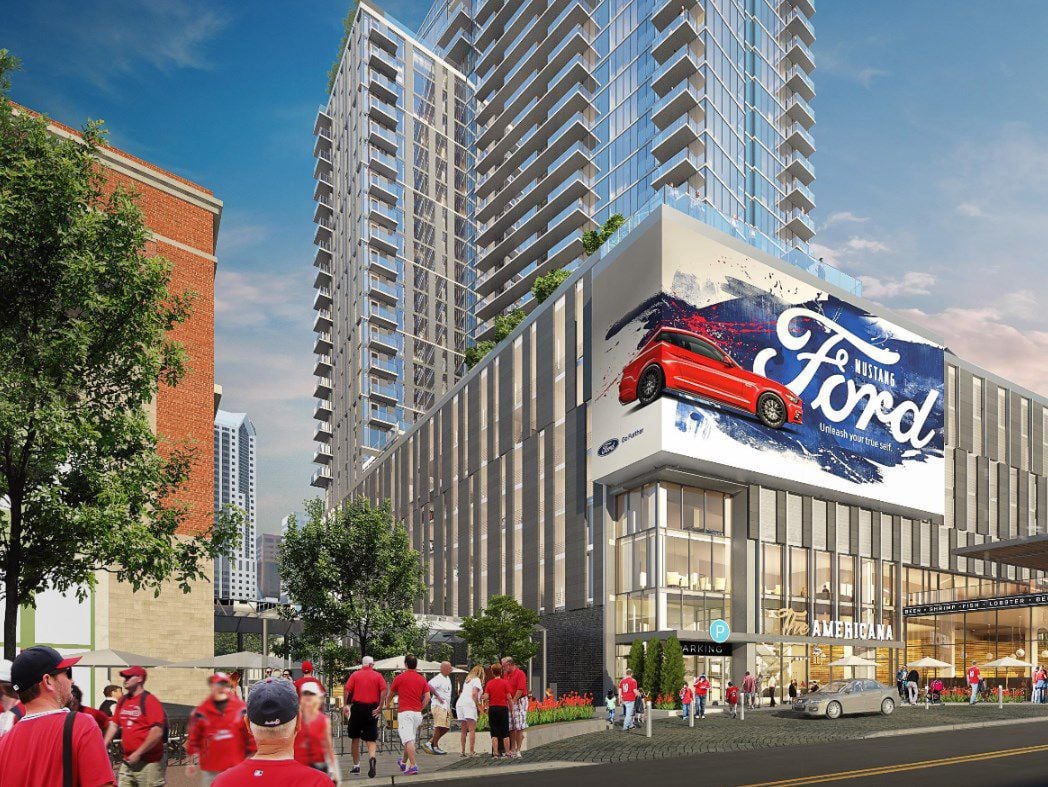 A rendering of the proposed Ballpark Village apartment tower planned to open in 2020. (Rendering via Cordish Companies).

A rendering of the office planned in Ballpark Village's second phase. PricewaterhouseCoopers, which has an office in the Bank of America Plaza downtown, is the anchor tenant. 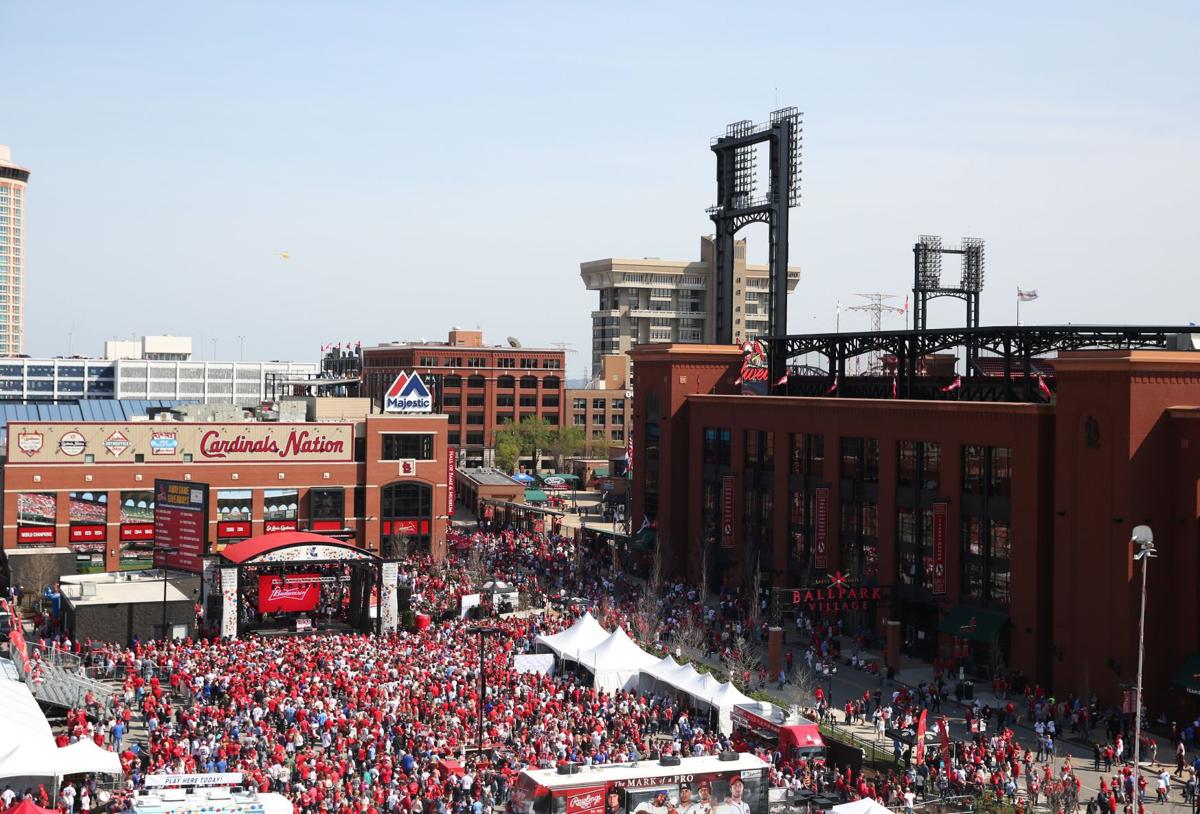