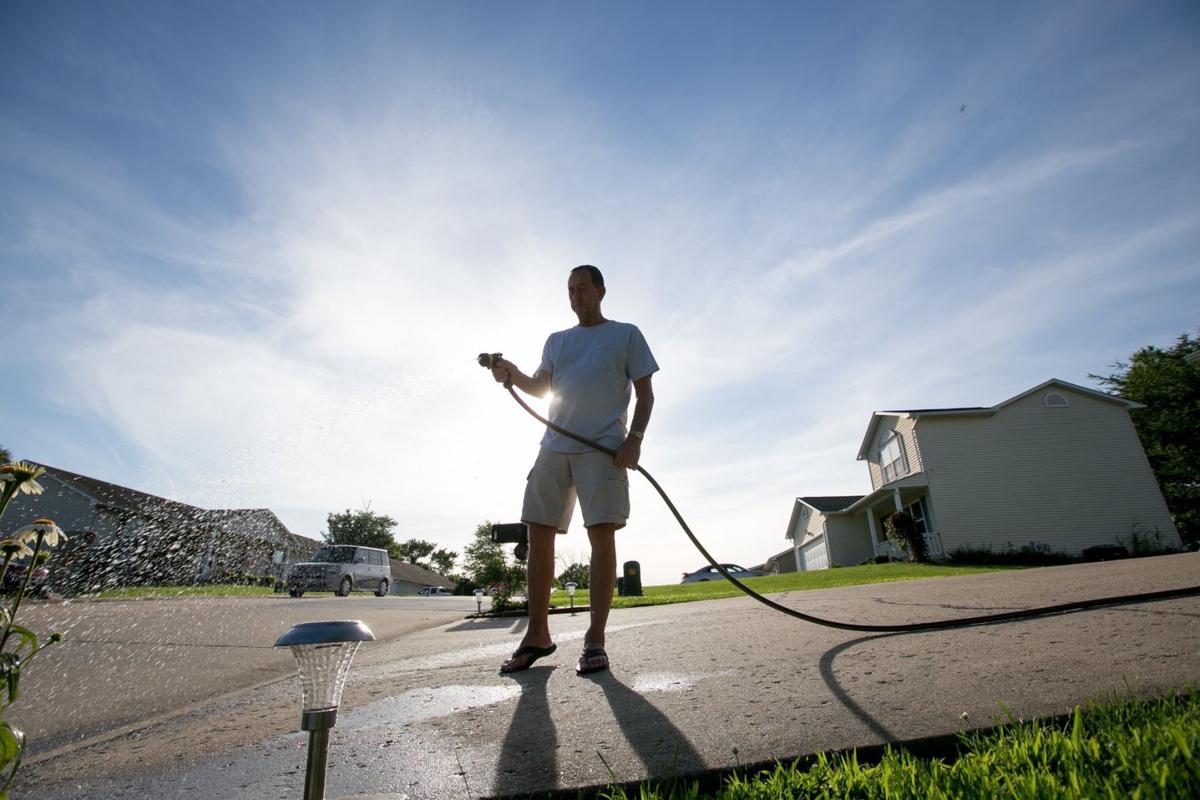 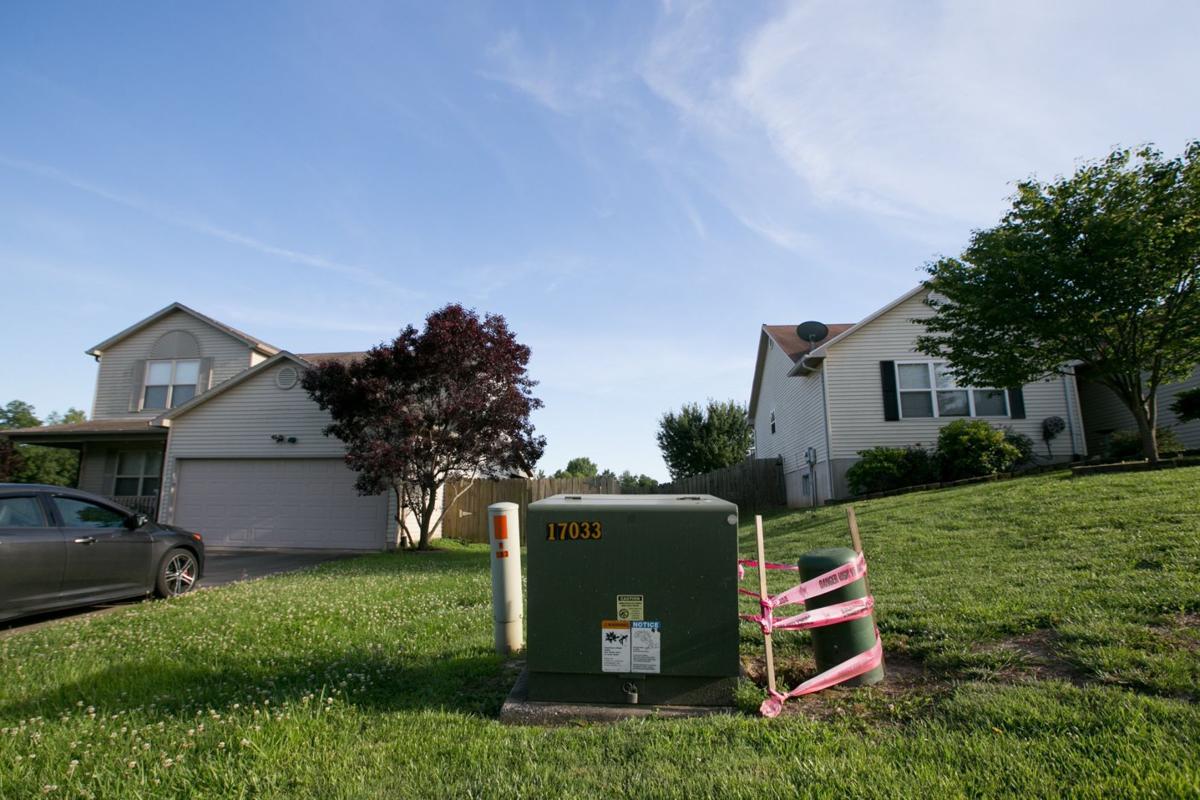 A small sinkhole in the front yard of the home of Adam South at 319 Greenbrier Drive in the Hillcrest Manor subdivision near Cape Girardeau, photographed on June 8, 2016. (photo by Glenn Landberg of the Southeast Missourian) 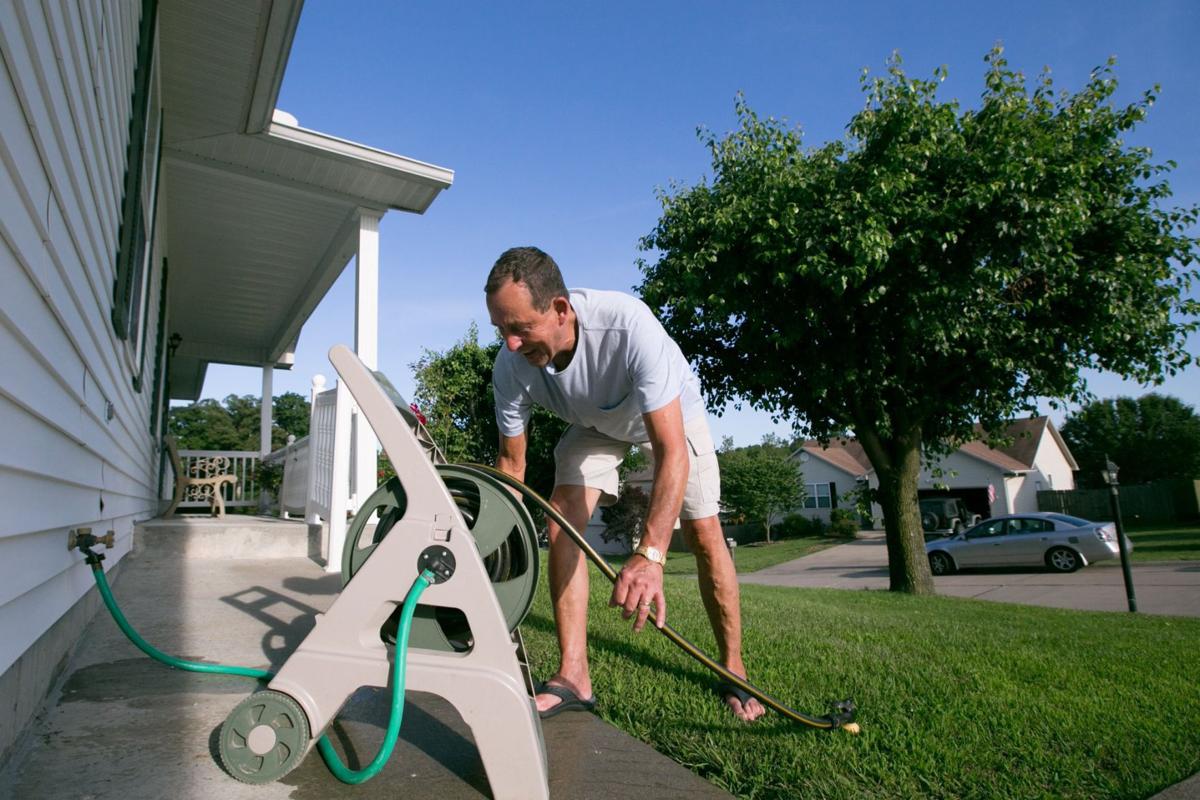 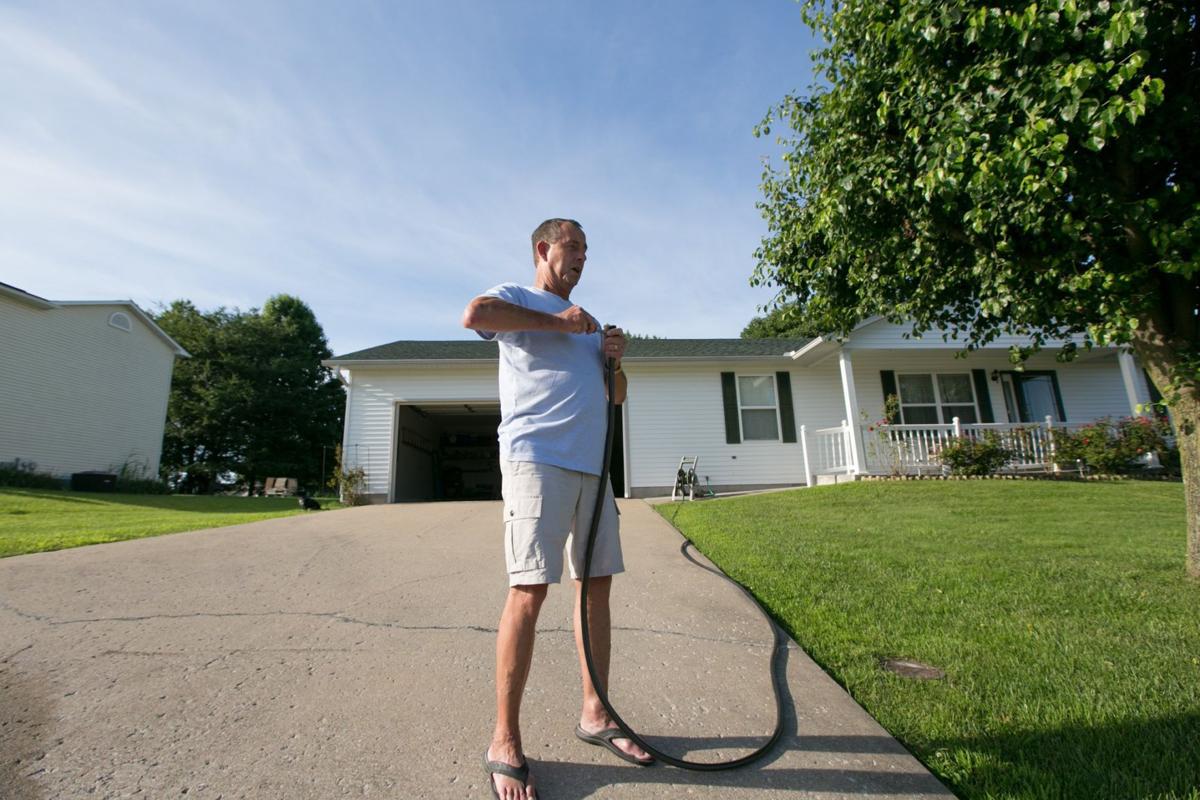 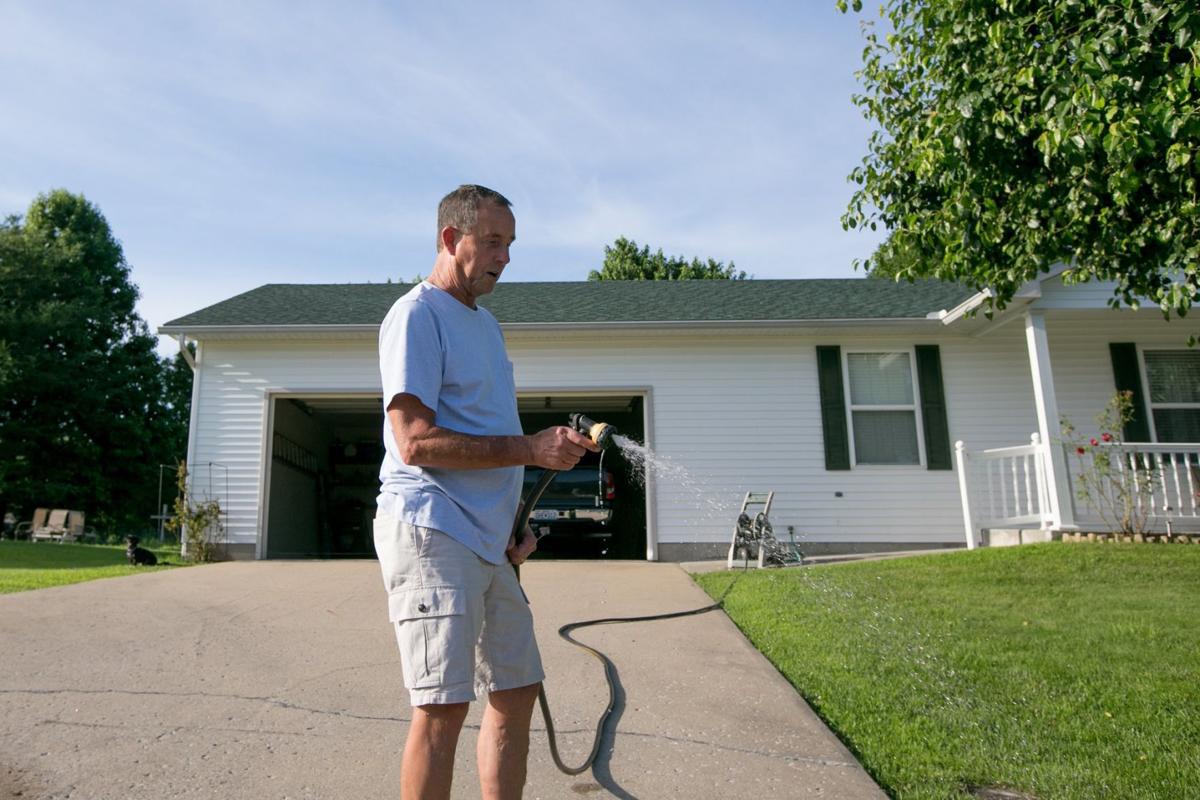 Residents of the Hillcrest Manor subdivision near Cape Girardeau, Mo., were often told not to drink their water.

Contamination led to frequent boil orders in the failing water and wastewater system that serves close to 250 homes in southeastern Missouri. But two years ago, a St. Ann company bought the utility and spent more than $1 million to fix it up.

Now, the Hillcrest residents are facing a new problem: a huge rate hike that could boost monthly bills from some of the cheapest in Missouri to some of the most expensive.

The hike proposed by the Hillcrest Utility Operating Co., from around $25 a month to nearly $150 a month, has put a vexing question in front of state regulators: How do you get investors to pay to fix up failing water and sewer systems without sending customers into rate shock?

The problem is particularly acute for small, failing systems without enough customers to spread out the costs of big capital increases.

But there’s more at stake than a big rate increase, according to the Missouri Office of Public Counsel, which represents ratepayers in front of the Missouri Public Service Commission.

While even that office sees as necessary an increase almost as large as that proposed by Hillcrest Utility, the office is raising questions about the truthfulness of the company’s president: Josiah Cox, who heads St. Ann-based Central States Water Resources Inc., the company that runs Hillcrest.

Regulatory staff and the Office of Public Counsel have both questioned whether the 14 percent interest rate on a loan made to Hillcrest to fix up the failing water and sewer system is the best deal for ratepayers. They point out that the company that holds the loan to Hillcrest is owned by the same people who hold a majority stake in Hillcrest: Robert and David Glarner, the St. Louis developers behind the Northwest Plaza redevelopment.

Beyond costs to ratepayers, the Office of Public Counsel even presented evidence that Cox may not have disclosed all of his future income and assets during a personal bankruptcy in 2014, raising questions about whether a bankruptcy trustee could reopen the case and put the utility holding company at risk.

“This has not been a very transparent or cooperative relationship so far,” said Cydney Mayfield, deputy counsel for the Office of Public Counsel. “When you’re working with regulated entities, that transparency and flow of information is critical.”

Cox says he’s providing a service no one else will and that acquiring more systems will allow it to spread the costs to fix them up over more customers.

“I saw there were a ton of water and wastewater utilities that no one wanted,” he said in an interview. “The big utilities aren’t interested for various reasons, and there was a need for someone to come in and fix them.”

Regulators agree that the systems appear to have improved from a dismal state.

“And obviously, for far too long, these residents have not been paying what they should’ve been paying,” PSC Commissioner Bill Kenney said during a hearing on Hillcrest’s rate increase. “I mean, because it’s been just in disarray.”

Cox says homeowners struggled to sell their houses due to the frequent boil orders, a problem that has since been fixed.

Resident Tonya South, who has lived in Hillcrest since 2012, worries the huge proposed increase could have similar effects. She said one of her neighbors ended up losing a buyer for her house after the real estate agent disclosed water and sewer bills could be increased to $150.

“We understand you need to raise it, but do a gradual increase,” South said in an interview.

Another resident, David Lane, said he wished there had been more warning upfront about what it would cost.

“I know they did a lot of upgrades to it and everything, but we never had a meeting on what it was going to cost,” he said. “I know the man’s got a right to get his money back, but he doesn’t have to get it all back in one year.”

But even the Office of Public Counsel is proposing a large rate increase. However, it wants to see a combined average rate of $133 per month for water and sewer phased in over two years, something Cox opposes.

Cox says that while he empathizes with the Hillcrest residents, a gradual increase won’t work.

The PSC will make a final decision on how to structure rates in a ruling expected later this summer.

‘Not really a great solution’

Part of the reason Cox is proposing a large increase is the 14 percent loan from the Glarners. Cox said in testimony to the PSC that the company wouldn’t be able to make its debt payment with phased-in rates.

But the Office of Public Counsel and the PSC staff say that Cox didn’t try to renegotiate the loan term, even after the Glarners bought Fresh Start LLC, the company that held it. They were given a nearly 90 percent stake in the utility company’s parent, far larger than the previous debt investors, but the rate on the loan stayed the same.

Cox, a builder who used to own Trumpet Builders and worked in water and wastewater engineering, filed for Chapter 7 bankruptcy in February 2014. In January, Central States Water Resources was formed, as was its parent company, First Round CSWR LLC.

By February, Fresh Start, made up of 12 investors, was formed to invest in Hillcrest Utility. Later, the Glarners bought Fresh Start and the loan. When they did, they also received 87 percent in a company that owned Central States’ parent.

In a brief, the PSC staff said that because the Glarners are both the debt and equity investors, it had concerns that the financing agreement wasn’t an arms-length transaction.

Because Robert and David Glarner are both the equity and debt investors, there is less risk, the PSC staff wrote, and thus, it recommended a lower return than pitched by Hillcrest.

Bob Glarner, in an email, said the high rate was already set by a group of California investors Cox worked with.

The high rate is appropriate, Glarner said, because the environmental liability would fall to them should the system fail or Cox fail to perform. Banks wouldn’t take on environmental risk, and Cox came to them after one bank mentioned the Glarners as possible investors, Bob Glarner wrote.

Beyond costs, the Office of Public Counsel argues Cox’s past bankruptcy raises serious questions about his trustworthiness. During testimony, Mayfield presented evidence that suggested Cox did not disclose all of his assets or income when he was filing for bankruptcy.

“There are potential criminal violations related to the fact that he signed a document under oath and was not truthful about it,” Mayfield said.

Cox, during testimony, said he was advised by an attorney through his bankruptcy. Asked about public counsel’s allegations, he told a reporter: “It’s factually not true.”

Without Cox, however, or investors like the Glarners, Missouri has to find some other way to deal with the large number of small, failing water and wastewater systems. Combining them under ownership of one company may be a better approach, Bob Glarner suggested.

“Having small independent systems throughout the state without common control or adequate resources is what has contributed to the high number of systems currently in noncompliance with (the Missouri Department of Natural Resources) and in violation of environmental regulations,” Glarner wrote in an email.

But in order to fix up small water and sewer systems and, at the same time, protect ratepayers, Mayfield said regulators shouldn’t just accept any offer they see.

“There’s not really a great solution,” she admitted. “But just because Mr. Cox presented this solution does not mean he’s the right solution.”

Rate increase sought at Hillcrest: Under the company’s proposal, monthly water and sewer bills would rise from about $25 per month to almost $150 per month.

Water and sewer customers of St. Ann company will be paying $100 more per month

A small sinkhole in the front yard of the home of Adam South at 319 Greenbrier Drive in the Hillcrest Manor subdivision near Cape Girardeau, photographed on June 8, 2016. (photo by Glenn Landberg of the Southeast Missourian) 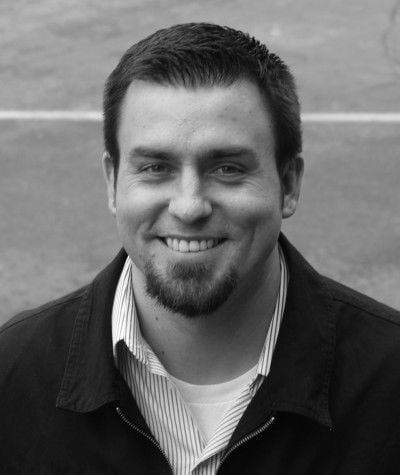 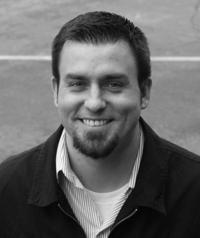