Rates rising for Ameren Missouri customers, except Noranda
0 comments
Share this
All our Winter Warm-Up coverage for 99¢
1 of 4 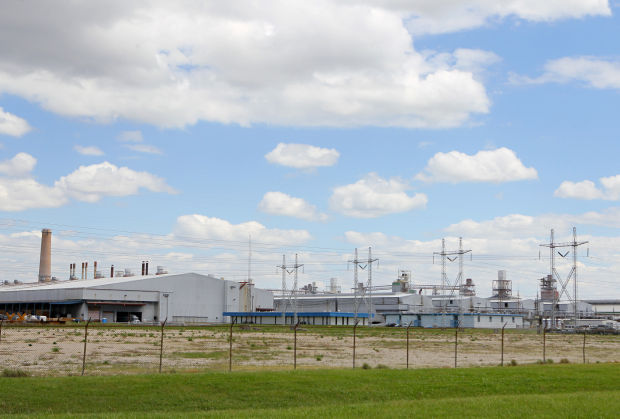 The Noranda aluminum smelting plant in New Madrid, Mo. as seen on Thursday, May 1, 2014. Photo By David Carson, dcarson@post-dispatch.com 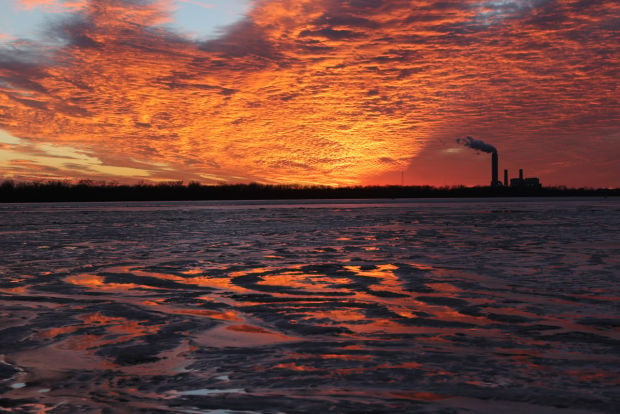 The Ameren UE Sioux Power Plant near Portage des Sioux is silhouetted against a spectacular sunset on Sunday evening, Jan. 26, 2014, with color reflecting off the ice in the Mississippi River in the foreground. The photo was taken from the Great River Road north of Alton, Ill. Photo by J.B. Forbes, jforbes@post-dispatch.com 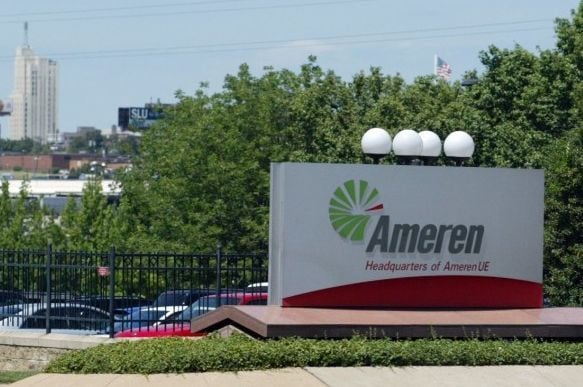 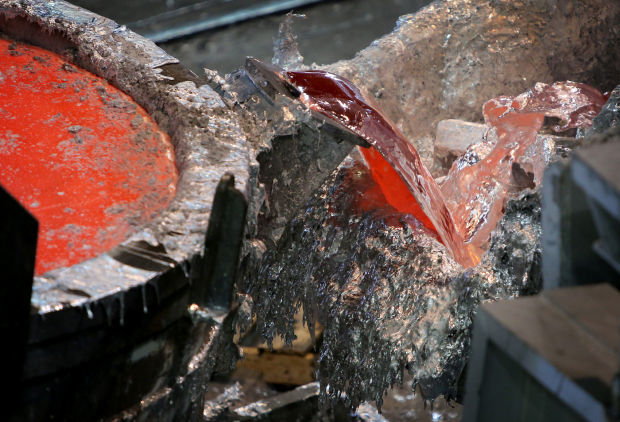 Molten aluminum is transferred into a furnace that will used to make aluminum rods at the Noranda aluminum smelting plant in New Madrid, Mo. on Thursday, May 1, 2014. Photo By David Carson, dcarson@post-dispatch.com

The Missouri Public Service Commission took the unusual step Wednesday of carving out an exception for the New Madrid aluminum plant, actually cutting prices for Noranda Aluminum. That cut will be made up by the utility’s other customers, adding an additional cost on top of the rate increase.

Ameren’s $122 million increase comes out to roughly a 3.5 percent increase in rates, but more of those costs will be borne by households rather than larger business customers because of the rate structure regulators chose.

For residential customers, Ameren estimates the rate increase amounts to about 5 percent and will add between $5.50 and $6 to their average monthly bill beginning this spring.

The decision to also cut Noranda’s rates will shift additional costs to residential and business customers. For the typical residential customer, the break to Noranda represents just less than $1 per month, resulting in an average total monthly increase of between $6.50 and $7.

Wednesday’s decision marks the sixth time Ameren has won a general rate increase since 2007, which has driven up electricity prices for Missouri customers nearly 50 percent since then. But the increase Wednesday is less than half the $264 million increase Ameren initially requested in July.

And in a reversal for Ameren that crimped its overall rate increase, the PSC opted to lower the utility’s allowed return on equity, or profit, to 9.53 percent from 9.8 percent. Ameren had requested an increase to 10.4 percent.

Joan Bray, executive director of the Consumers Council of Missouri, said she was “relieved” that the increase was not nearly as much as the utility first asked for.

“The fact that they gave them a smaller ROE, that they authorized a smaller profit ... that’s a nice trend we’d like to see more of,” she said.

The ruling caps Noranda’s effort, which began more than a year ago, to lower electric rates at its primary aluminum smelter in the economically depressed Missouri Bootheel. Noranda had argued that the plant faced closure without lower electricity prices, one of the largest expenses for making aluminum.

Noranda’s bid was supported by Gov. Jay Nixon, a Democrat; and Missouri Public Counsel Dustin Allison, who advocates for lower rates on behalf of consumers in front of the commission. Allison filed a proposal asking for a lower rate for Noranda while tying it to job numbers at the smelter. Bray’s group, which counts large industrial power users such as Noranda as allies, also supported the request.

Noranda’s political allies argued that Ameren customers would be better off if the plant continued to buy the vast amounts of electricity needed to smelt aluminum — roughly as much as consumed by the city of Springfield, Mo. Ameren, they said, couldn’t make as much money if it had to sell the power in the open market.

But Ameren and other opponents said Noranda was overstating its so-called “liquidity crisis.” Even some PSC commissioners said they doubted the situation was as dire as Noranda made it out to be.

Ameren spokesman Warren Wood said the decision could set a bad precedent and encourage other companies to ask for breaks from regulators.

“I would suspect there’s a lot of companies that would argue they have some sort of financial challenge,” he said.

Still, Noranda’s coalition was able to convince the commission this time around that a lower rate would keep the plant viable and protect other ratepayers in the long term.

“Ameren’s remaining customers would pay less than they would have paid had Noranda left Ameren’s system entirely,” PSC Chairman Robert Kenney said during the hearing.

Bray said she doubted the commission would entertain other requests because no other user is comparable to Noranda, which already pays its own, lower electric rate and buys some 10 percent of Ameren’s electricity.

Commissioners said Ameren could charge Noranda $36 per megawatt hour, $6.35 lower than what it pays currently. Regulators also capped how much Noranda will have to pay to cover fluctuating fuel costs, a charge that is adjusted three times a year.

But the lower rate granted to Noranda stipulates that the smelter must maintain at least 850 jobs at the New Madrid plant. In addition, Noranda must invest $35 million a year in the plant.

“It will make a meaningful contribution to the business,” Noranda spokesman John Parker said. “Both the employment levels and the capital spending at the smelter are consistent with historical amounts. Those are commitments to continue to invest the business.”

The decision also bars “special dividends” paid to Noranda investors, which critics of the smelter blame for its financial troubles. Private equity fund Apollo Global Management, Noranda’s former controlling investor and still its largest shareholder, loaded up the company with more than $1 billion in debt when it acquired it in 2007. It subsequently paid more than $350 million in special dividends through 2013.

“In part, Noranda’s precarious financial situation is the result of Apollo Management’s decision to milk massive amounts of cash out of the company when it purchased it in 2007,” the PSC noted in its order.

That didn’t outweigh the fear that Noranda could close the smelter and shift even more costs onto other Ameren customers.

“Right now, Noranda pays a large portion of Ameren Missouri’s fixed costs, costs that will not go away just because Noranda no longer buys electricity,” the order said.

The commission voted 4-1 to approve the rate increase, which included the cut for Noranda. The lone dissenting vote came from Commissioner Stephen Stoll.

Stoll, in a dissenting opinion, said the PSC’s order amounted to “managing an aluminum smelter over which it has no authority” and shifted Noranda’s risk from “investors who own and profit from it to the backs and pocketbooks of utility customers.”

Ameren could challenge the PSC’s decision in court, but Wood said the utility hadn’t decided whether it would.

Samantha Liss of the Post-Dispatch contributed to this report.

• $1 of increase is because Noranda Aluminum, Ameren's largest customer, gets a rate cut of 15 percent.

The New York private equity fund announced Monday it would sell its 33 percent stake in the aluminum maker.

Ameren to terminate Noranda contract by 2020, while rate ruling moves to the courts

Noranda slashing over half of smelter workforce, may close plant

Longtime consumer advocate served 18 years in Missouri senate and three years as head of the advocacy group she helped form.

Commissioners also indicate they may lower returns Ameren is allowed to earn.

Ameren rate increase could be lower than first thought

Regulators say utility should only get about a third of the 9.7 percent increase first proposed.

Regulators have granted Ameren rate increases totaling some $867 million since 2007.

Ameren Missouri's biggest customer seeks a rate cut that could prove costly to other customers.

The Noranda aluminum smelting plant in New Madrid, Mo. as seen on Thursday, May 1, 2014. Photo By David Carson, dcarson@post-dispatch.com

The Ameren UE Sioux Power Plant near Portage des Sioux is silhouetted against a spectacular sunset on Sunday evening, Jan. 26, 2014, with color reflecting off the ice in the Mississippi River in the foreground. The photo was taken from the Great River Road north of Alton, Ill. Photo by J.B. Forbes, jforbes@post-dispatch.com

Molten aluminum is transferred into a furnace that will used to make aluminum rods at the Noranda aluminum smelting plant in New Madrid, Mo. on Thursday, May 1, 2014. Photo By David Carson, dcarson@post-dispatch.com