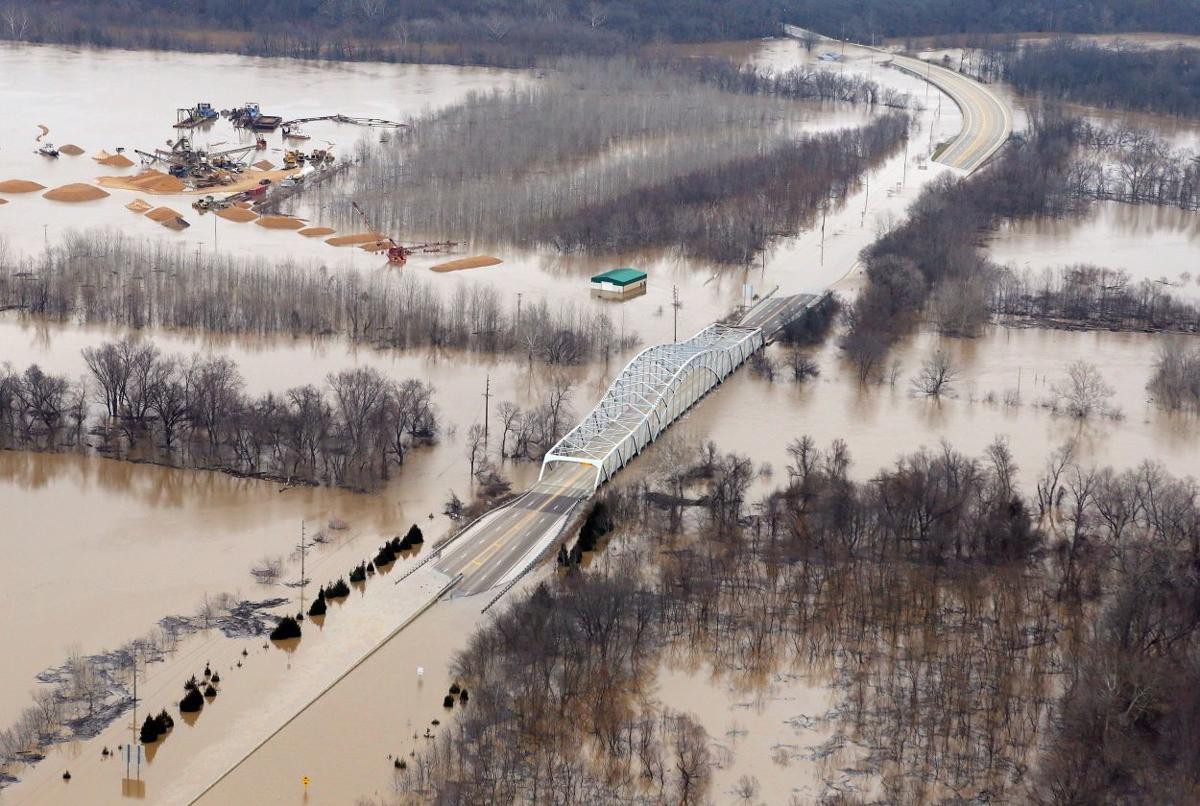 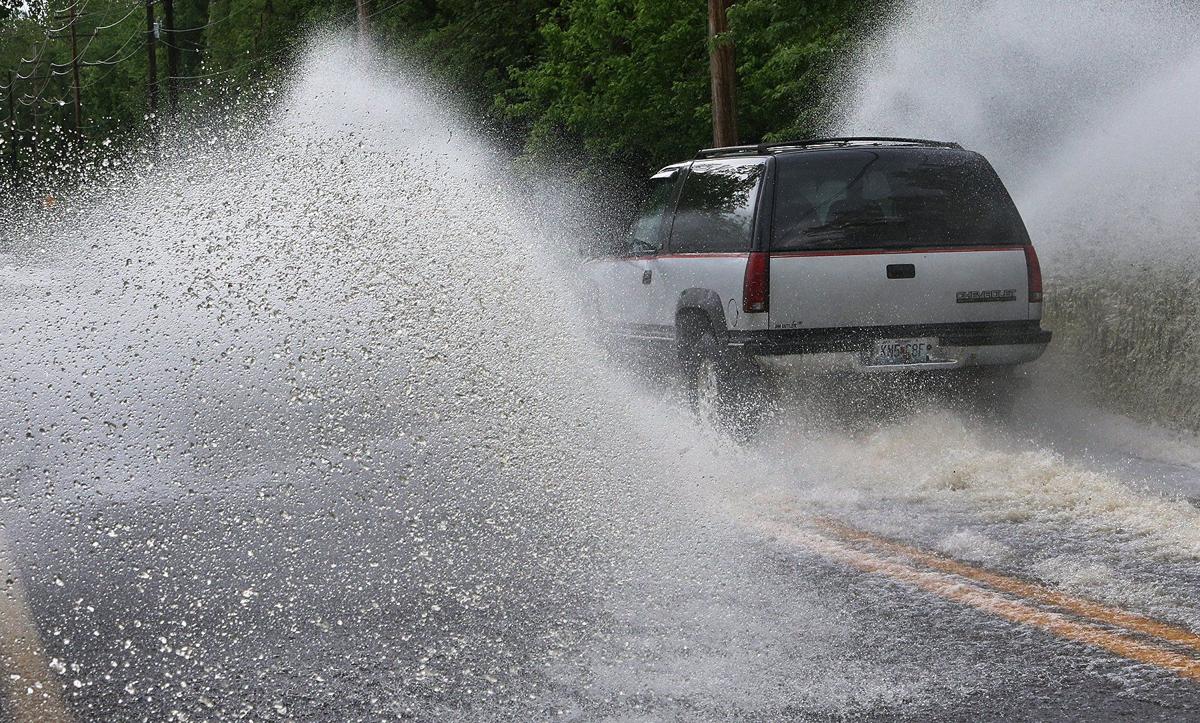 A driver plows through water covering Marshall Road in Valley Park on Sunday, April 30, 2017. The rising Meramec River is covering the road and the valley. St. Louis County Police closed the road moments after this photo was taken. Photo by J.B. Forbes, jforbes@post-dispatch.com 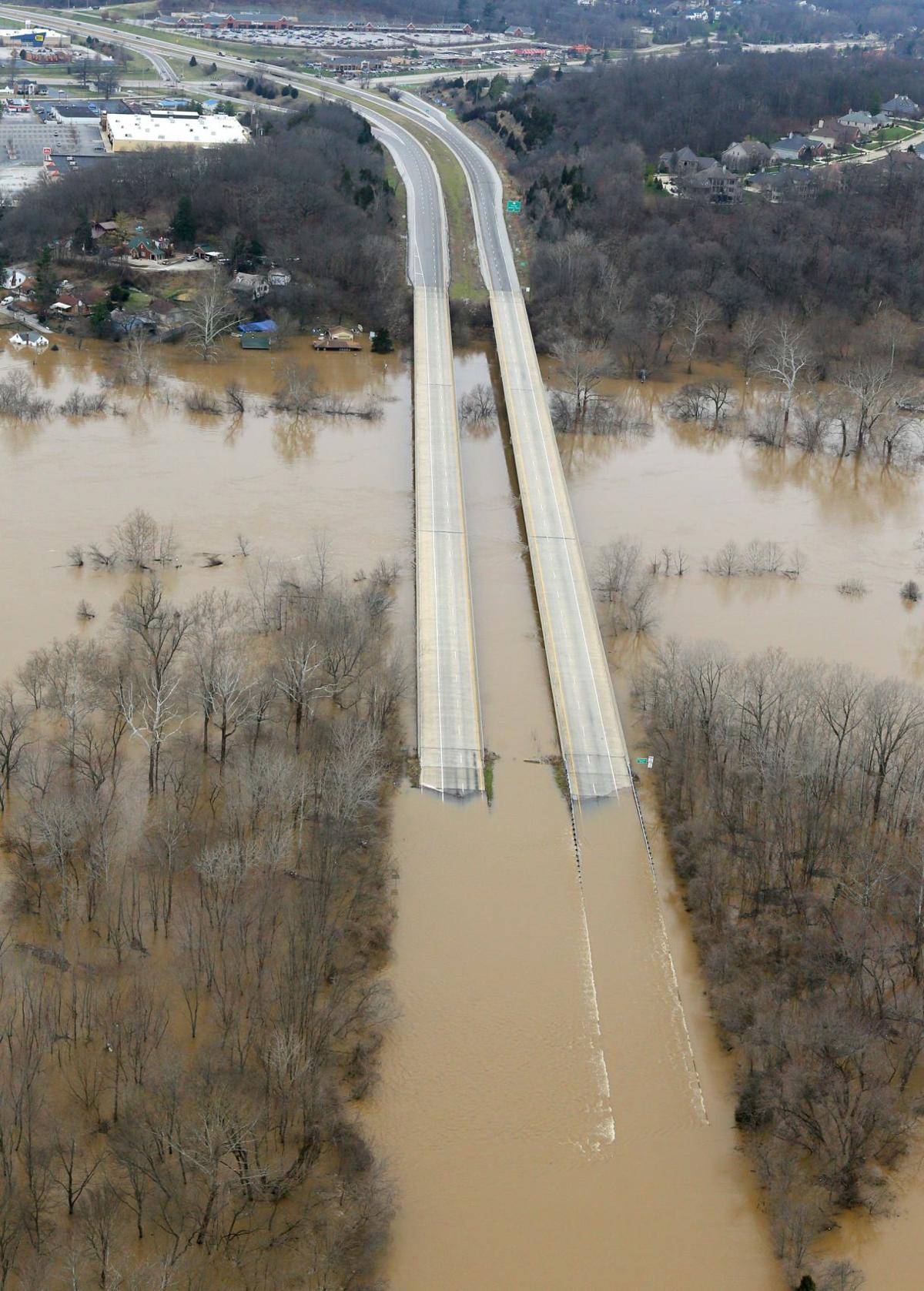 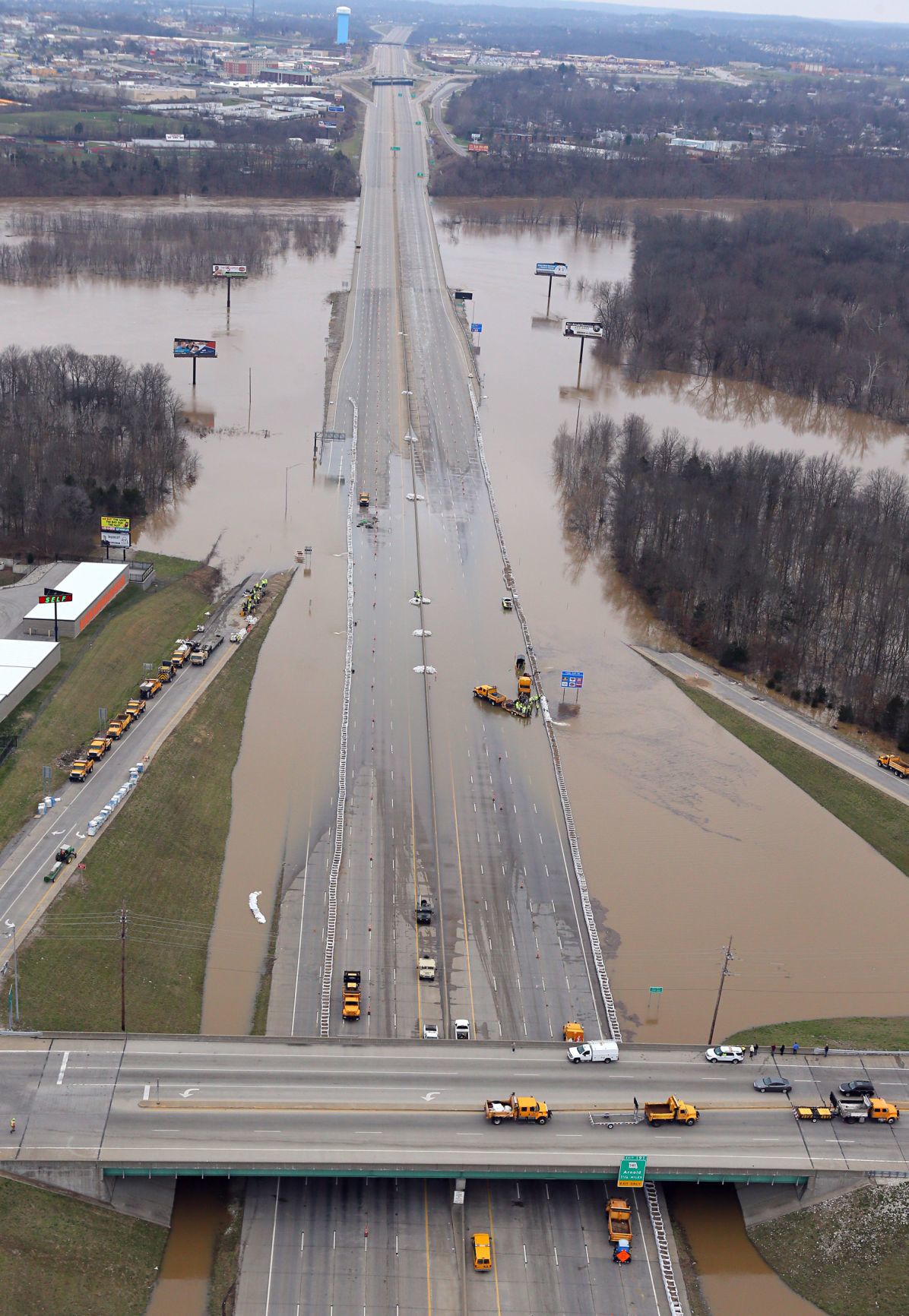 Crews from the Missouri Department of Transportation and the Missouri National Guard battle Meramec River floodwater covering Interstate 55 on Thursday, Dec. 31, 2015. The floodwater forced a complete shutdown in both directions of Interstate 55 at Meramec Bottom Road. Photo By David Carson, dcarson@post-dispatch.com 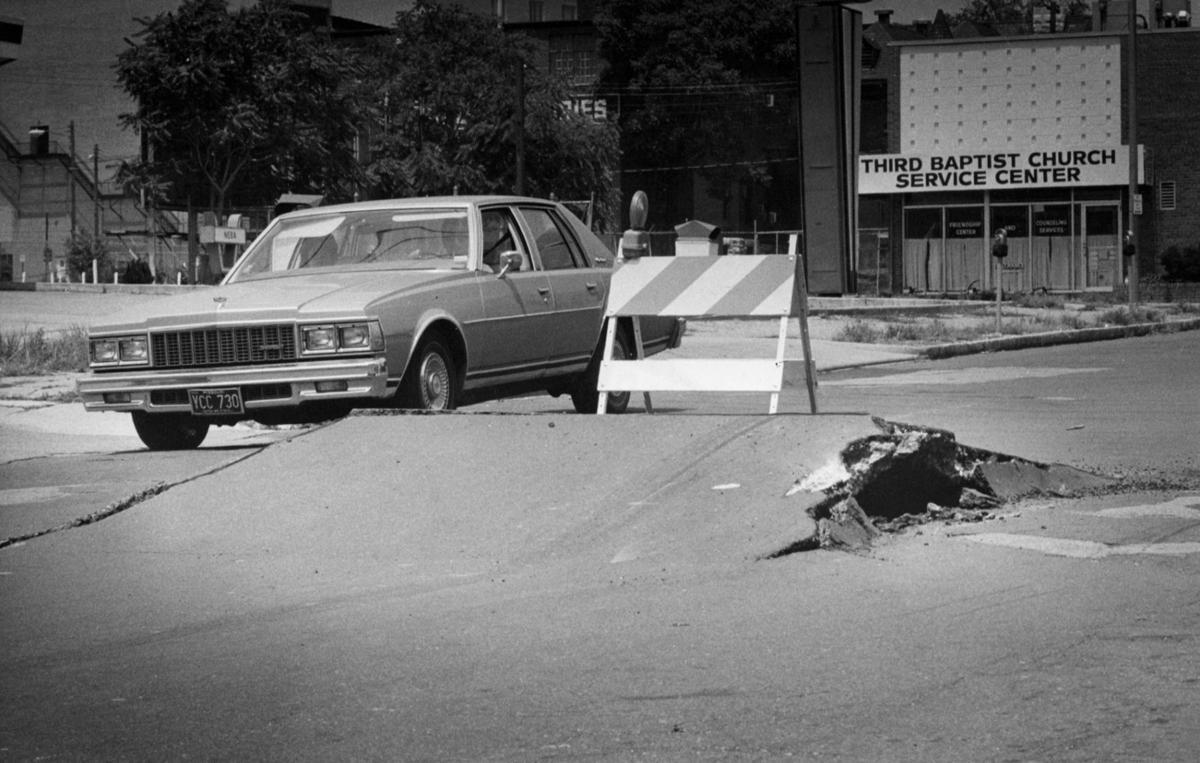 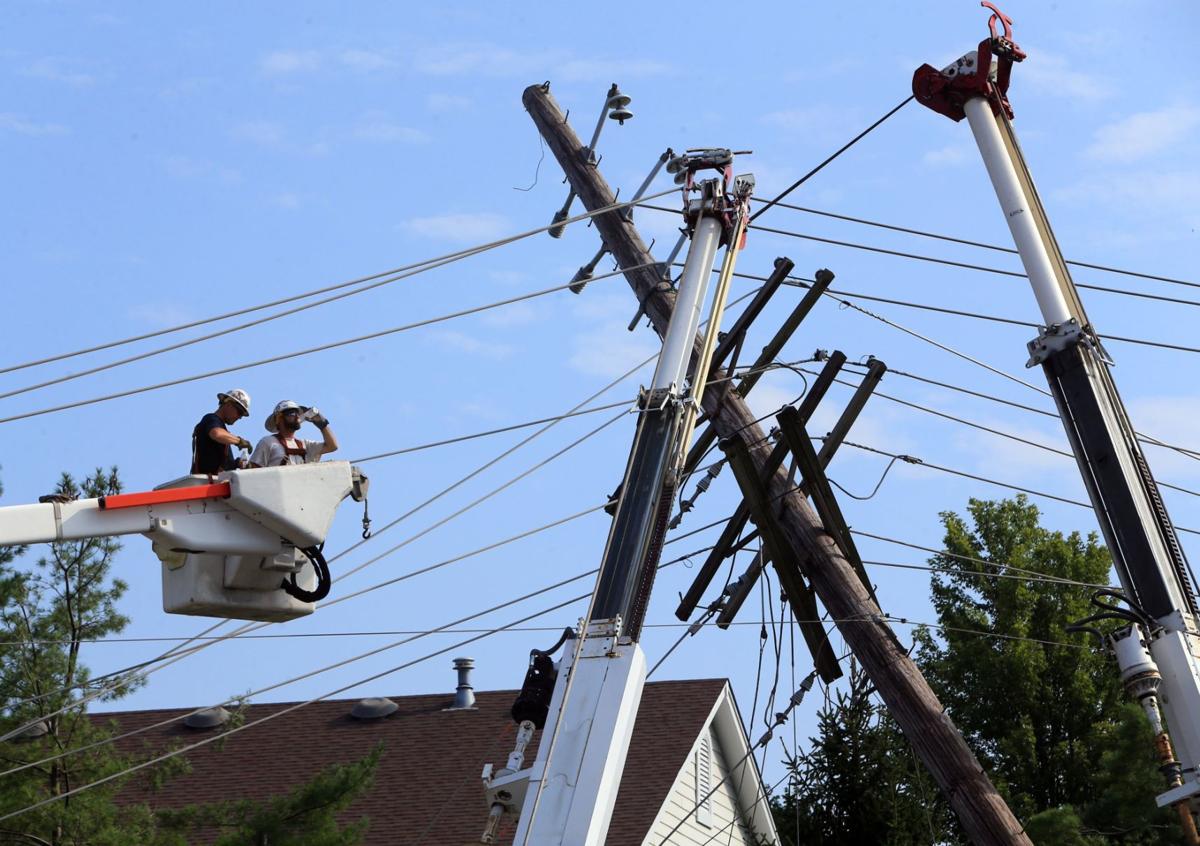 OLD MONROE — Less than an hour north of St. Louis, Missouri Highway 79 has dealt with a range of complications and closures from major flooding in recent years. But even when the nearby Mississippi River is calm, the roadway can’t catch a break from the elements — something illustrated this summer, when punishing heat caused its pavement to buckle, creating a bump that work crews had to fix.

With the region — and practically everywhere — exposed to hotter and ever more erratic climate conditions, roads like Highway 79 aren’t the only types of infrastructure pushed to their breaking points. As society confronts an increasingly unfamiliar climate, there are signs that the engineered backbones of modern civilization are at risk across the U.S.: Rising seas spoiling water supplies. Power plants idled because water from ponds and rivers, used to cool generators, is no longer as chilly as it used to be. Dams threatened by torrential rains and runoff.

New extremes are testing roads, bridges, dams and utilities to unprecedented degrees, even as they age beyond their intended lifespan.

“It’s kind of a one-two punch of more stress being put on these systems at a time when they are already fragile,” said Mark Abkowitz, a professor of civil and environmental engineering at Vanderbilt University with a special focus on infrastructure resilience to extreme weather.

Climate extremes are becoming more common in the region. St. Louis has seen record-high temperatures with greater frequency in recent years, according the National Weather Service — including a peak of 21 days of record-setting warmth in 2012. It’s also not getting as cold here, as shown by a rise in the number of “record-warm lows,” in which daily low temperatures register as the warmest on record for a given date. Overall, average annual temperatures in the city are now about 3 degrees warmer than they were 80 years ago.

That change — and unpredictability — matters for engineers who must take climate into account when designing infrastructure, by anticipating the range of conditions that it must withstand. But now, climate-related bell curves and bedrock assumptions are shifting beneath their feet. The same is true for infrastructure that already exists: Some of what was built decades ago now faces conditions that it wasn’t designed to withstand.

Rising seas mean that coastal areas not only confront increased tidal flooding, but also underground saltwater intrusion, forcing some Miami-area municipalities, for example, to shut down or relocate well fields for their municipal freshwater supply. Inland, Toledo, Ohio, briefly saw its water supply choked off in 2014 by Lake Erie’s toxic algae blooms — episodes fueled by agricultural runoff, but made more likely in the hot conditions abetted by climate change.

Elsewhere, aging dams and reservoirs are not designed to accommodate increasingly torrential runoff, as shown by evacuations and the threat of failure at California’s Oroville Dam in 2017. And widespread fires in the state, fanned by hotter, drier weather, have led utilities to deliberately cut power to hundreds of thousands of residents, to keep power lines from sparking more.

The St. Louis area offers some of its own examples of infrastructure problems amid hot and extreme conditions. Just ask the local road crews.

“Everything expands when it gets hot. And pavement does the same thing,” explained Bob Becker, a maintenance engineer for the Missouri Department of Transportation, discussing episodes of pavement buckling. “If that pressure gets great enough, it’ll pop up. It’s no different than pushing on a piece of paper from both sides.”

He says those occurrences — also known as “blowups” — typically happen on concrete pavement instead of asphalt surfaces, because the material is less flexible.

The region’s increasingly frequent major floods add to roadway woes, deteriorating asphalt and eroding support materials underneath, according to MoDOT — which, earlier this year, faced at least $30 million in unexpected damage from high water in the state. The same episodes can increase risk for bridges, by scouring away sediment from around their support structures, Abkowitz said.

Bridges are another place where heat-related complications can arise, with road joints that expand and contract. The joints are designed to wiggle with traffic, wind and weather. And occasionally all of that wiggle leads them to wear out. Temperature extremes mean they could wiggle more and wear out faster.

The heat can hurt the electric grid, too. When historic heat and drought gripped the Midwest in 2012, one power plant shut down because it couldn’t access cooling water. Water levels had dropped below the plant’s intake pipe, according to the Midcontinent Independent System Operator, or MISO, tasked with managing the electric grid around St. Louis and across parts of 15 states. Multiple plants had to ramp down production that year because cooling water was too warm, according to a report in the New York Times. St. Louis power company Ameren said it had not run into similar issues.

Flooding can also complicate operations for riverfront power generating facilities. Amid the region’s major floods earlier this year, one Missouri plant had flood debris clog its intake pipe, according to John Grotzinger, the vice president of engineering operations and power supply for the Missouri Public Utility Alliance. Grotzinger didn’t identify the plant.

When floodwater was near its apex in early June, the industrial plant that runs a “steam loop” to supply heat and hot water to many downtown St. Louis buildings and hotels was overwhelmed by 10 to 12 feet of water, after a Mississippi River pump station failed. The system’s ensuing shutdown came at a highly inopportune time, right as the Stanley Cup Final came to the city, and sparked a desperate scramble to bring in temporary boilers from as far as Chicago, Indianapolis and Minnesota. The substitute boilers served a dozen buildings, including major hotels, a city jail, and parts of Busch Stadium, where the St. Louis Cardinals hosted a weekend series with the Chicago Cubs.

Experts say all of these events are just hints at what might come.

Some are working to prepare. Ameren, for instance, is installing 12,000 new utility poles — “many fortified with composite materials to better withstand severe weather.” It is also adding 400 miles of new cable underground.

MISO said the grid is designed with hot extremes in mind.

Others worry governments and utilities aren’t investing in maintenance, and won’t adapt fast enough to climate change. And there are immense technical challenges, like the absence of historical precedents, as engineers design things for a more unpredictable, extreme climate.

“There’s no question that the folks that construct and maintain our infrastructure are not keeping up with, in my opinion, the practices that they need to consider, going forward,” said Abkowitz. “A lot of the design and construction that’s going on is sort of based on knowledge that we’ve accumulated up to this point in time.”

A driver plows through water covering Marshall Road in Valley Park on Sunday, April 30, 2017. The rising Meramec River is covering the road and the valley. St. Louis County Police closed the road moments after this photo was taken. Photo by J.B. Forbes, jforbes@post-dispatch.com

Crews from the Missouri Department of Transportation and the Missouri National Guard battle Meramec River floodwater covering Interstate 55 on Thursday, Dec. 31, 2015. The floodwater forced a complete shutdown in both directions of Interstate 55 at Meramec Bottom Road. Photo By David Carson, dcarson@post-dispatch.com