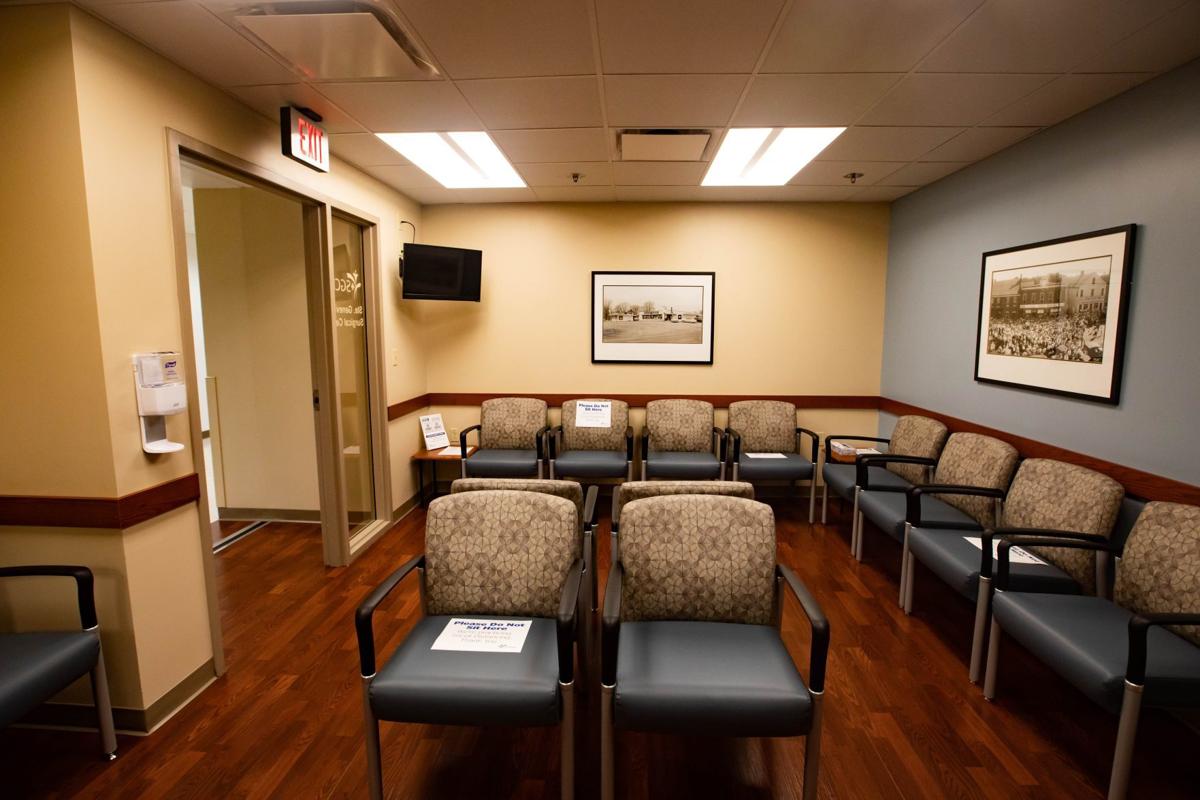 A view of an empty surgery waiting room at Ste. Genevieve County Memorial Hospital in Ste. Genevieve on Wednesday, April 29, 2020. Since the spread of the coronavirus, all elective surgeries have been postponed or cancelled to protect individuals from unnecessary visits to the hospital. Photo by Rachel Ellis, rellis@post-dispatch.com 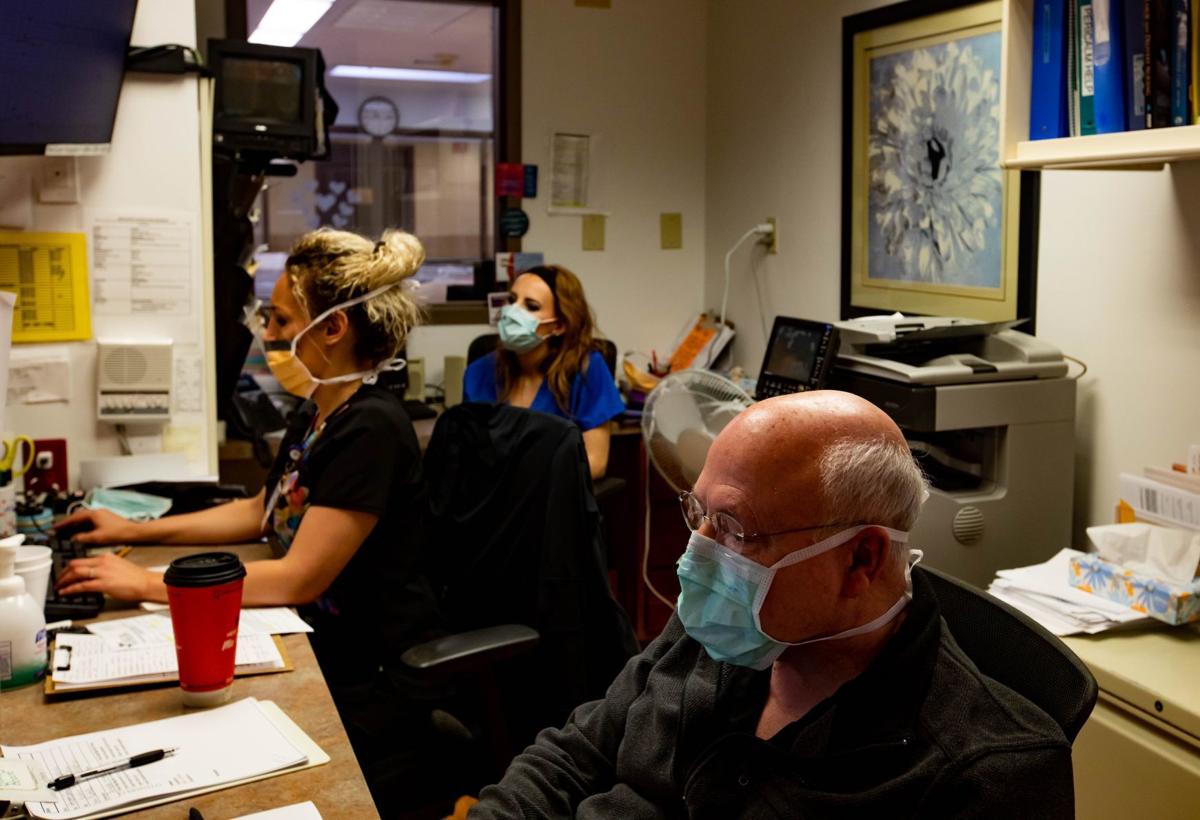 The hallways of Sullivan County Memorial Hospital have emptied out.

The 25-bed, 90-employee hospital in northern Missouri near Kirksville normally has 11 or 12 full beds every day. But not now. The coronavirus outbreak has cut its numbers in half, or worse. CEO Tony Keene is expecting a 50% to 55% decline in revenue for the month of April, compared to the year before.

“Basically, the spigot was turned off,” Keene said.

Weeks ago, hospitals across the country canceled elective procedures, sent non-essential workers home and ramped up preparation for incoming coronavirus patients. Some big-city facilities have since been swamped by the sick and dying.

Not rural hospitals. Many in the Missouri and Illinois countryside are nearly empty, hospital officials and industry leaders say. Residents are avoiding them out of fear. But coronavirus patients also haven’t appeared, at least not in the numbers anticipated.

Now, with many beds empty, rural hospital administrators are increasingly worrying about how they’ll pay their bills.

The rural health landscape was already difficult before the pandemic. Rural hospital closures have been on an uptick in recent years, with 18 closing last year in the U.S., up from 10 in 2009.

“We were like a congestive heart failure patient,” said Dr. Randy Tobler, CEO of Scotland County Hospital, 200 miles northwest of St. Louis, near the Iowa border. “They can go down and pick up the mail, but you better not put them on a stress treadmill.”

“And guess what? COVID is a stress treadmill,” he added.

As COVID-19 spread throughout the world early this year, hospitals began spending more money fortifying their stocks of protective gear for employees, and losing revenue as patients avoided hospitals. Many started canceling elective procedures in order to preserve equipment and limit potential exposure for patients, visitors and employees.

Money has since been made available for rural hospitals through a number of government sources, like the Small Business Administration and the Federal Emergency Management Agency. Missouri healthcare workers and organizations received $618 million through the first round of the Coronavirus Aid, Relief and Economic Security (CARES) Act, and about half of that went to hospitals, according to the state hospital association.

But some hospital leaders fear that if the crisis stretches on much longer, they will need much more relief.

Worse, they worry that chronic illnesses could go untreated in their communities.

The pandemic has compounded existing struggles. About half of Missouri’s rural hospitals already had negative operating margins before the novel coronavirus hit, according to Missouri Hospital Association spokesman Dave Dillon.

The most vulnerable are independent hospitals without the backing of larger health systems, plus those in poor, remote areas, and those in states — like Missouri — that have not expanded Medicaid, Tobler said.

The hospital association recently estimated that hospitals in the state are now losing between 60% and 70% of their outpatient business, and 40% of inpatient business.

In Pilot Knob, 85 miles south of St. Louis, the 15-bed Iron County Medical Center had been in bankruptcy for two years when the pandemic hit.

Often these hospitals will have 10 to 30 days of cash on hand, he said.

“That can dry up in a heartbeat when your total revenues are dropping by, you know, 50% to 60% for a month. That can spell the end,” Gilmore said.

He projected total patient volumes for April would be down 50% to 60%.

Still, Gilmore said Tuesday that he had not sent any workers home. The hospital had already scaled down to 75 employees under the bankruptcy, and with the industry’s existing workforce shortages, if he let employees go, he couldn’t get them back. Besides, the situation is so dire, Gilmore said, even if he laid off the entire staff, including himself, the hospital would still operate at a loss.

“Our rural health care system is so fragile right now,” Gilmore said. “We’ve already been cut to the bone. There’s nothing left to give for rural health.”

At the 17-bed Pinckneyville Community Hospital, about an hour southeast of St. Louis in Illinois, business is down at least 75%. Revenue had fallen by about $11,000 per day in March.

“People are scared to come back,” said CEO Randall Dauby.

Dauby said the novel coronavirus pandemic is an unprecedented time for hospitals, worse than the Great Recession. People stayed away then, he said, because they didn’t have money to spend.

“This is even worse because people don’t have the money to spend, plus they have the fear of COVID,” Dauby said.

Melissa VanDyne, executive director of the Missouri Rural Health Association, said revenue decline has been greater and faster even than the 2008 recession.

Ste. Genevieve County Memorial Hospital, off Highway 61 about 60 miles south of St. Louis, has been seeing far fewer patients during the pandemic. Hospital revenues are down about 50%, said CEO Tom Keim.

“We were fortunate enough that we were in a very good financial position going into this,” Keim said.

The hospital had moved into cancer treatment and other services over the years, he said, and last year did more than 2,700 surgeries.

“We can make it through,” Keim said. “But I’d hate to see if we had to go another couple months.”

His biggest concern echoed that of doctors from Pinckneyville to Sullivan County: Residents delaying care for chronic illnesses.

This past week, the city of Ste. Genevieve was essentially shut down. Downtown businesses were closed, or switched to curbside pickup. Schools were locked up, sports canceled, the local community center dark. The Ste. Genevieve Catholic Church guest book had a six-week gap in entries, with none between March 11 and April 22.

“It’ll get better,” said Barb Friedman, the only person inside the church on Wednesday afternoon.

When the first cases of the novel coronavirus were detected in the Midwest, patients started rescheduling appointments, said Dr. Erika Leung. Her routine visits have declined by about half, she said, which has made her concerned.

Still, rural doctors, even now, see hope on the horizon.

Pinckneyville’s Dauby thinks his hospital may be able to start adding back some elective procedures this month.

Gilmore said Iron County Medical Center had applied for a federal Paycheck Protection Program loan, which he said would “keep the doors open.”

And Leung has started to see some of her patients come back. They realize, she said, that the hospital is taking precautions:

Patients with suspected COVID-19 enter the hospital through a different door, and those who walk through the main entrance are screened for symptoms. Cleaning has increased between appointments. Staff are asking patients to self-quarantine in the seven days leading up to an elective surgery, and take their temperature daily. Hospital staff are calling each day to check on those patients.

“We’re just treating every patient as if they have COVID,” said Anne Wolk, a family nurse practitioner at the hospital’s clinic in Bloomsdale.

Physicians are starting to reschedule postponed appointments, as the hospital prepares to ramp up in the coming week with some elective procedures.

Keim said he knows people are scared, but he does not want patients to allow their conditions to worsen.

He is eager for life to go back to normal for his patients, and for his hospital.

Hospitals are running out of beds or lack the intensive care units for more than one or two seriously ill patients.

A view of an empty surgery waiting room at Ste. Genevieve County Memorial Hospital in Ste. Genevieve on Wednesday, April 29, 2020. Since the spread of the coronavirus, all elective surgeries have been postponed or cancelled to protect individuals from unnecessary visits to the hospital. Photo by Rachel Ellis, rellis@post-dispatch.com