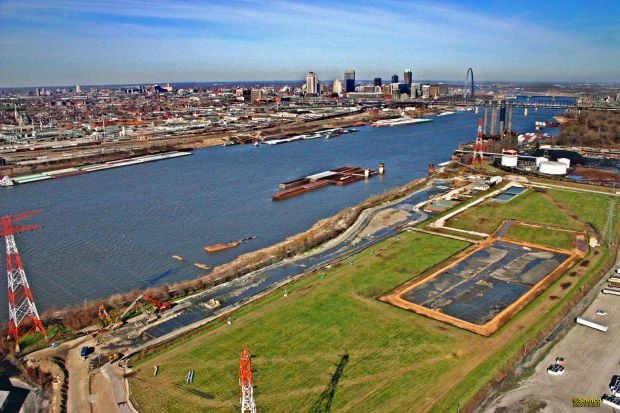 Looking north toward downtown St. Louis on Nov. 29, 2003, a containment wall along the Mississippi River is under construction at Solutia's Site "R" in Sauget. Photo by Robert Srenco 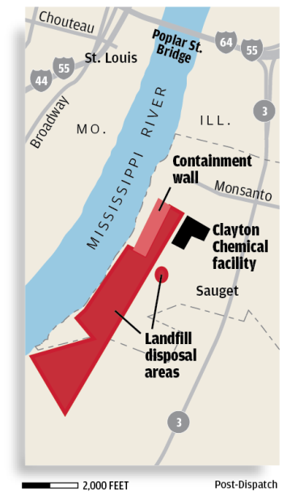 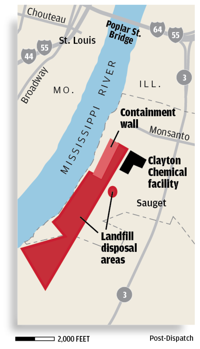 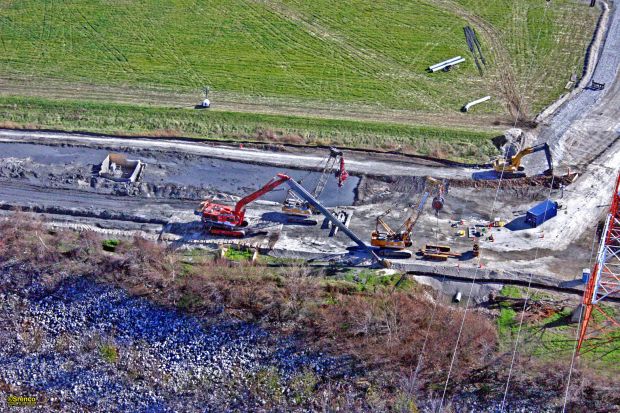 Looking east, a containment wall is under construction at Solutia's Site "R" along the Mississippi River in Sauget on Nov. 29, 2003. Photo by Robert Srenco

Dealing with the hazardous chemicals dumped years ago in Metro East landfills could end up costing nearly 250 businesses, government agencies and nonprofit groups in the region — even though most never operated east of the Mississippi River.

Solutia Inc. and Pharmacia LLC — two companies formerly affiliated with Monsanto — are suing other businesses and organizations in an effort to recoup millions of dollars they spent to keep toxic waste from reaching the Mississippi.

Among those being asked to cough up money are high-profile employers, such as Anheuser-Busch InBev, St. Louis University, BJC HealthCare and Kansas City-based Hallmark Cards. Even the federal government is named as a party because of waste from the departments of Defense and Agriculture.

The lawsuits are complicated, illustrating just how tangled environmental law can be. Companies are being sued for actions that took place years ago and involve businesses that, in some cases, changed ownership and operations — or no longer exist.

At least 80 of the recently named defendants have settled, and a motion is pending to settle with an additional 38. But more than 100 still have to decide: write a check and be done with it, or take up the complicated task of defending against something that happened decades ago and is governed by the far-reaching federal Superfund law.

“The amount in controversy may not be that great for any particular party, so it can be awkward to defend because it’s complicated and it’s old,” said George von Stamwitz, a partner at Armstrong Teasdale who leads the firm’s environmental practice group. “And if there’s not a lot at stake, it feels to many people just like it’s a tax.”

The lawsuits, which were filed over the last year and as recently as late May, are some of the most recent actions in 15 years of litigation and EPA orders stemming from the agency’s efforts to contain the worst effects of a legacy of chemical manufacturing and heavy industry in Sauget.

At issue are toxic chemicals that Solutia and Pharmacia say the companies sent to the Clayton Chemical Co. and later Resource Recovery Group, both of which operated a waste oil and solvent recovery business that took hazardous substances from hundreds of businesses from the early 1960s to the late 1990s.

Chemicals from the Clayton site would be seeping into the Mississippi River were it not for an underground wall more than 120 feet deep and over half-a-mile long that Solutia and Pharmacia built in 2005, the companies say. The $28 million wall and treatment system handles groundwater contamination related to Monsanto’s history of chemical operations in the area, but it also keeps pollution from the nearby Clayton Chemical site from leaving Sauget via the river, they say.

It’s an example of how the far-reaching and still-controversial federal Superfund law puts companies at risk of being drawn into cleanups years after even only remote involvement, regardless of whether they mishandled waste or not.

As long as a party can show waste was produced by another company and it caused the government or a private entity to incur a cost, “theoretically, there’s the beginning of a claim,” von Stamwitz said.

The National Association of Manufacturers says the Superfund law imposes “effectively perpetual liability” on businesses. For most companies, any liability stems from actions before the 1980s, prior to the Superfund law and stricter environmental rules for disposing of dangerous chemicals. Since then, liability markets have evolved to deal with the risk of chemical contamination, von Stamwitz said, and companies make sure they get proof their substances were destroyed or handled properly.

“If you don’t know where your waste went pre-1980 or pre-1985, you could get one of these letters in the mail,” he said. “The statute can reach back decades and decades.”

Business may not like the broad liability imposed by the law, but it has led to a degree of self-policing in the hazardous waste management industry as companies attempt to minimize their risk. It’s also kept much of the cost of dealing with toxic pollution in the hands of the industries that created it, rather than general taxpayers.

And for areas like Sauget, with a history defined by the chemical companies and manufacturers lured there with lax local regulations in the early to mid-20th century, it has forced action to contain and remediate the most dangerous contamination.

Sauget was originally incorporated as Monsanto, Ill., in 1926, a place where Monsanto Co., once a huge chemical producer, could operate with a friendly local government. Its chemicals business was spun off as Solutia in 1997 and is now a subsidiary of Tennessee-based Eastman Chemical Co., which acquired it in 2012.

The agriculture-focused Monsanto of today was spun out of Pharmacia in 2002, which had merged with the company two years earlier. Pharmacia was acquired by Pfizer shortly after.

Monsanto and Solutia, not Pharmacia, carry the future liability for the legacy chemical business. Solutia is managing the legal actions, a spokeswoman said. It is responsible for paying for much of the remediation costs related to Sauget’s contamination, but the Monsanto of today still acts as a financial backstop to Solutia for some of the liabilities related to the chemical business in Metro East.

That chemical business produced cancer-causing polychlorinated biphenyls, or PCBs, used in pesticides, transformers and paint until they were banned in 1979. A host of other chemicals were produced in Sauget plants, producing byproducts buried in a landfill near the river.

Several landfills in the village, many owned or operated by the late Mayor Paul Sauget’s Sauget & Co., accepted all sorts of waste from throughout the area and the heavy industries nearby, according to court filings. At one of the landfills, encompassing more than 200 acres along the Mississippi River, “open dumping” continued until the early 1990s, Solutia’s lawsuit says.

“When the Environmental Protection Agency issued the order to design and install (the underground wall and removal system) to over 70 parties, Solutia and Pharmacia were the only parties who responded and complied with the order,” Eastman spokeswoman Maranda Demuth said in an email. “Solutia and Pharmacia are now seeking to recover some of those costs from the many parties responsible for impacting the groundwater in the Sauget area, including those who sent hazardous materials to the Clayton Chemical site.”

The companies named this year range from the big — like car rental giant Enterprise Holdings — to small auto body shops. There are so many that the firm that has handled much of the Superfund litigation for Solutia, Husch Blackwell, had to bring in another law firm to avoid conflicts of interest. Three federal judges in East St. Louis have also recused themselves from the case, citing potential conflicts.

In addition to seeking reimbursement for past work, the lawsuits appear to ask a judge to make the named companies liable for future costs related to Clayton Chemical. That could prove significant, because next steps for the EPA-mandated cleanup are coming.

The EPA issued decisions for the next phases in the Sauget cleanup process late last year. One, which involves a new cap and layers of soil, asphalt and rock over the contaminated areas, is expected to run north of $20 million, according to the EPA. Another governs sites further east along Dead Creek and is expected to cost some $14 million.

Meanwhile, the wall and filter system along the river costs roughly $2 million a year to operate and treat 210 million gallons of contaminated groundwater a year. Some of that $2 million pays for waste from Clayton Chemical, and the entities that produced the pollution there need to chip in, Solutia and Pharmacia say.

“The whole issue of contribution is an ongoing legal conversation,” said David Shorr, a former director of the Missouri Department of Natural Resources and an attorney with Lathrop and Gage. “It’s appropriate for the main (potentially responsible party) being tagged with the tar baby to pursue potential contributions.”

Often, it takes a lot of research and even some “creativity,” Shorr said. But “just because you make your claim doesn’t mean you’re going to get it.”

1926: Sauget is incorporated as Monsanto, Ill., and the former chemical manufacturer and other heavy industries flock to the welcoming municipality. Decades of byproducts from chemical production and manufacturing are buried in landfills in the village, later renamed Sauget.

1990s: Environmental Protection Agency and companies that operated in Sauget begin cleaning sites east of Illinois 3, including portions of the once dangerously-polluted Dead Creek.

1999: Federal government, on behalf of the EPA, sues to recover costs of containing and cleaning hazardous waste sites in Sauget east of Illinois 3. Private companies negotiate and litigate during the next 15 years over how much each will pay.

2002: Solutia and Pharmacia, under a consent decree with the government that also named dozens of other potentially responsible parties, agree to build a 3,500-foot long, 120-foot deep wall west of Illinois 3 to keep contaminated groundwater in Sauget from leeching into the Mississippi River.

2005: The companies complete the $28 million wall project, which includes an extraction and treatment system for contaminated groundwater near the river bank.

2013-2014: U.S. sues to recover more oversight costs for the projects west of Illinois 3 and issues decisions for the next steps in the cleanup process. Pharmacia and Solutia begin suing companies that allegedly produced waste sent to the Clayton Chemical, which operated a hazardous waste recycling facility for several decades. Pollution from that site is mitigated by the groundwater treatment system, they say.

Cleanup could be ordered at Metro East zinc smelter

Looking north toward downtown St. Louis on Nov. 29, 2003, a containment wall along the Mississippi River is under construction at Solutia's Site "R" in Sauget. Photo by Robert Srenco

Looking east, a containment wall is under construction at Solutia's Site "R" along the Mississippi River in Sauget on Nov. 29, 2003. Photo by Robert Srenco