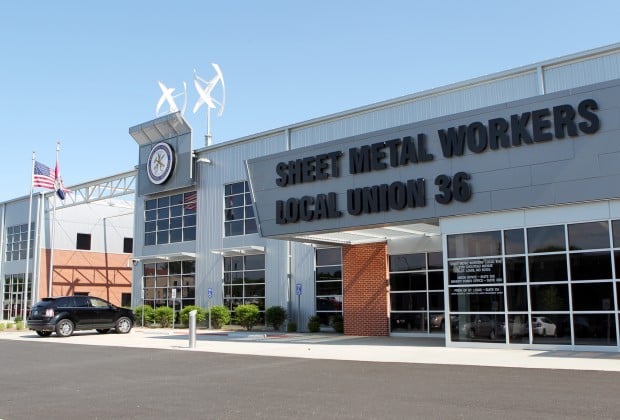 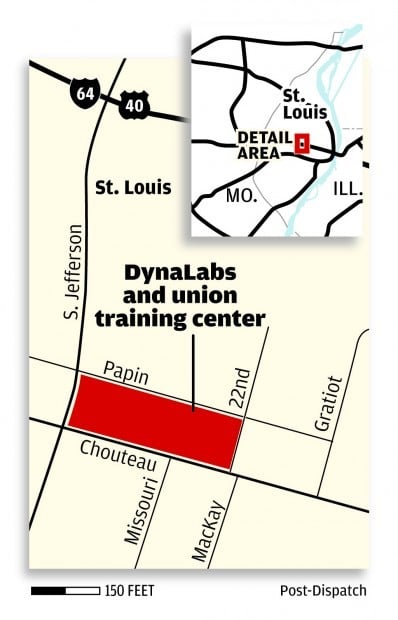 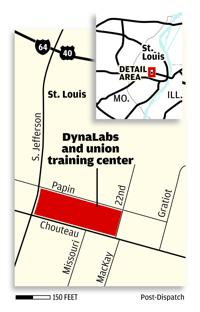 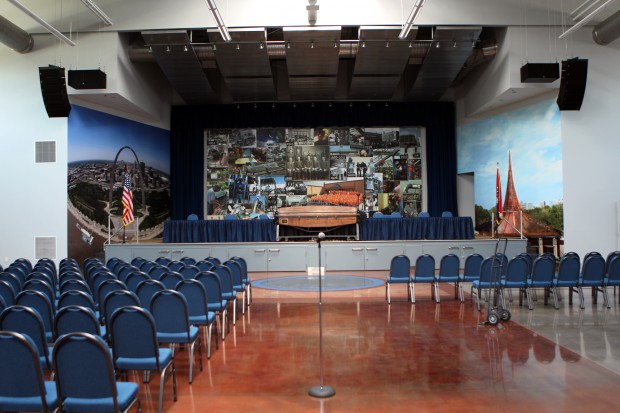 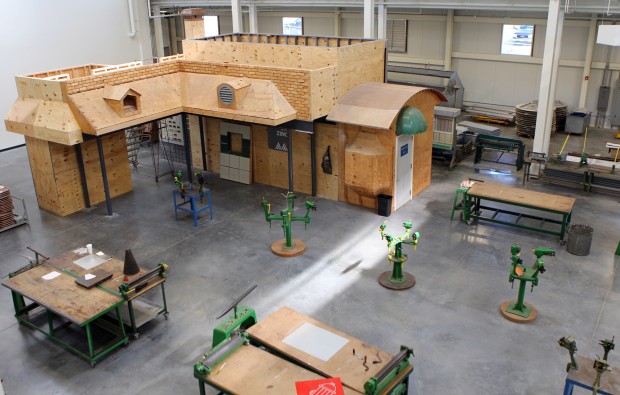 As pleasing as it is the eye, plants in metal trays have just a bit part in making the 96,000-square-foot building the latest in energy efficiency. Dan Andrews, coordinator of the local’s training program, said the structure shows what can be done to retrofit an old building to make economic sense in an age of ever-rising energy costs.

Local 36 plans to dedicate the building in a ceremony today, although its offices and training center have occupied the facility for months.

Also contributing to the project was the St. Louis chapter of the Sheet Metal & Air Conditioning Contractors National Association.

Local 36 officials anticipate their building, which dates to at least the 1940s, will earn LEED Platinum designation, the highest level in the U.S. Green Building Council’s rating system.

Except for the quartet of rooftop wind turbines, the building appears much like a typical low-rise factory. But the building is far from ordinary. The exterior is constructed primarily of recycled steel. The light-colored metal roof reflects summer heat while the wind turbines, plus arrays of water-filled rooftop tubes and 357 photovoltaic panels provide the building with hot water and much of its energy needs.

Three-fourths of the rain falling on the site never makes it to sewers. Some of the runoff is piped to the parking lot’s landscaped islands. More runoff is held in a detention pond, where it is released slowly to the ground and sewers. Some is collected in cisterns and directed to the structure’s low-flow urinals and dual-flush toilets. Rainfall nourishes the rooftop plant beds, which also help insulate the roof.

Inside, office floors are covered with sustainable cork and carpet tiles made of recycled material. Baseboards are made of bamboo. Office furniture includes wheat board, a material made of crushed wheat stalks and glue.

Andrews and Bob Barrett, Local 36’s marketing director, said the union needed more space for its training center, which formerly was a few blocks away on South Ewing Street. While the construction market remains in a deep funk, demand for retrofitting existing structures is growing, they said. Many sheet metal workers are retiring, resulting in a need for new apprentices trained to install the latest HVAC equipment, metal roofs and other projects that require sheet metal work.

Over the next 12 years, as many as half of the area’s 1,500 union sheet metal workers will retire, Barrett said.

“We have to speed up our training,” he said.

Barrett said the new training center and office also is a showcase for how an old building can be redone economically.

“It’s an investment in the future,” he said.

U.S. Bank was the development’s lender and buyer of federal New Markets Tax Credits allocated to the project, which also got tax-increment financing and 10-year tax abatement from the city. The state awarded the project $660,724 in brownfield tax credits to pay for removal of asbestos, lead paint and other hazardous material from the building.

Also on the site is DynaLabs, formerly at a St. Louis Enterprise Center business incubator at 3830 Washington Boulevard. DynaLabs, which does drug testing for pharmacists and hospitals, occupies 33,000 square feet of space, more than quadruple the size of its the space it had before.

Like its trades union neighbor, the new DynaLabs facility has rooftop solar panels and lots of natural light.

“We’re in a growth stage at this point,” he said. “We have some area on the second floor geared up for expansion.”

What happens when a bar wants solar panels in historic part of St. Louis?

Bar owner wants to go green, but historic standards stand in the way.

Work is to begin next month on Chouteau Crossing, the future site of a sheet metal workers' training center and a drug testing lab within a fa…

The Missouri Department of Economic Development said this morning that it has approved $660,724 in brownfield tax credits for a St. Louis project.