African Americans, also, are disproportionately dying: Black residents make up 12% of the state’s population, but well more than one-third of Missouri’s coronavirus deaths. In St. Louis and St. Louis County, they are dying at nearly double the rate of whites.

Even as coronavirus patient counts continue to fall at the region’s hospitals, the most recent COVID-19 statistics, as of Friday afternoon, show a marked demographic split in the death toll. Just six of about 800 dead in Missouri were under 40 years old; just two were under 30.

And yet the virus has found its way into the homes of the elderly and into senior living facilities throughout the St. Louis region, and in almost every county in the state.

No one, in this pandemic, has been more vulnerable than people like Essie Belinda Johnson.

COVID-19 deaths in Missouri by age

Johnson, 69, who was black, worked at the downtown Post Office before retiring. She started out sorting mail, and over the years she worked her way up to the position of shop steward. At home, she was loved for her cooking, and her menu stretched from greens to caramel cakes to sweet potato pies. She never measured, her daughter said — she just went by smell.

“She should have opened up a restaurant,” said daughter Tawanda Johnson. “She always talked about it.”

Her mother always wore jewelry, and always had her nails done. Lately she had worn her hair in a short, natural style.

But Johnson had aphasia from a stroke, and she had survived a heart attack years ago. She had been in a rehabilitation facility for two weeks for treatment of an ongoing respiratory issue, and then came home to her daughter’s house.

She was home for several days before she started feeling ill, again.

Many of those have contracted the disease in nursing homes: More than 1,700 nursing-home and assisted-living residents in St. Louis County have been infected, the county said Friday. More than 300 have died.

Nursing homes, with large groups living in close proximity, are a “perfect storm” for COVID-19, said Elvin Geng, a professor of infectious diseases at Washington University.

The racial disparities in infections and deaths are driven by several different issues, experts say.

Angela Fleming Brown, CEO of the St. Louis Regional Health Commission, said people of color are already disproportionately affected by chronic diseases, food insecurity and lack of access to health insurance — all of which can lead to poor health outcomes.

Historically, Fleming Brown said, it has been difficult to make progress on public health disparities because the region and the country have been slow to release data by race.

In 2015, the Ferguson Commission report included a call to action to require data from public institutions to be examined by race, gender and ethnicity. That data is becoming increasingly available, but there are still gaps.

“I think a lot of people who follow racial disparities in health outcomes across a number of different conditions were sort of anticipating this, but how quickly it played out and how large the differences are, I think, still caught everyone by surprise,” Geng said.

Chris Prener, an assistant professor of sociology at St. Louis University, said there is no evidence that there are biological or genetic risk factors that would explain these disparities. They are a result, he said, of historical disenfranchisement, persistent experiences of segregation and discrimination, and higher exposure to environmental risk factors.

“This is unsurprising, and I say that with a heavy heart,” Prener said. “This is not just a St. Louis story … I think St. Louis is a microcosm of the racial inequities that exist all over the United States.”

‘I wish people would take it more seriously’

Carol Strawbridge, 73, who was black, was a retired school principal. She spent her life as an educator and an active proponent of voter registration.

“Her biggest joy was going to work every day and educating children,” said brother Michael Strawbridge, a special education teacher who lives in the city’s Penrose neighborhood. She stood up for what was right and ran her school effortlessly, he said.

She was active in her sorority, church, and the League of Women Voters.

She had diabetes, Michael Strawbridge said, but it was under control. She was living at the Village North Retirement Community in north St. Louis County, but Strawbridge said he does not believe she contracted the virus there. The community took precautions to prevent transmission of the virus, he said, and his sister was also very careful.

He said she had become the matriarch of the family, after their mother died in 2006.

“She was well-respected, and she knew her craft inside and out,” he said.

Carol Strawbridge went to the hospital on May 3, and died May 21.

Evelyn C. Slater, 92, who was white, grew up in St. Charles County. Her father was a farmer, and she was one of eight siblings. She went to work as a nurse’s aide at hospitals in St. Charles and Hermann, Missouri.

She embroidered and made quilts, but was happiest with family. She had 10 grandchildren and 19 great-grandchildren.

Her son, Joseph Slater, of Audrain County, said she had several underlying conditions: heart disease, emphysema, COPD and diabetes. She was living in a senior facility in Washington, Missouri.

In April she tested positive for COVID-19. She died days later.

“I wish people would take it more seriously,” said Joseph Slater. “You see folks walking around without masks, or looking at the social distancing thing like it’s not a serious issue. But it really is.”

Vanessa Trotman, of the Penrose neighborhood in St. Louis, lost both her mother and her mother-in-law over just two days in April.

Her mother, Carol Ann Todd, 69, who was black, had traveled the world singing with choirs. She raised three children and worked for Charter Communications until the company’s headquarters relocated. Her grandkids called her “Granny,” and her great-grandchildren called her “G.G.”

But Todd, who lived with Trotman, had cancer, had recently undergone chemotherapy, and went to the hospital for an appointment, even as hospitals were beginning to send patients away to guard against the spread of the new coronavirus. Later that day, she was feeling ill, and went to the emergency room. She later tested positive for COVID-19.

Trotman’s mother-in-law, Lula Mae Redd, 87, who was black, lived in the Central West End. She had retired from working as a housekeeper in Ladue. Her late husband was a minister.

“She loved praying for people. She prayed every day for everybody,” Trotman said. “She just was a very spiritual person.”

“The hospital would call the house to give updates,” Trotman said. “And they would say, ‘I’m calling about your mom.’”

Tawanda Johnson was staying with a friend when her mother got out of the rehabilitation facility, but Tawanda was in and out of their Ferguson home, checking on her. Her brother was at the house full time, caring for their mother.

Then Essie Johnson got sick again.

The ambulance took her to nearby Christian Hospital, which wasn’t her normal hospital and didn’t have her medical records, family said.

The next few days were frightening. Family couldn’t go see her. They tried to manage her care from afar.

Johnson tested positive for COVID-19 on April 9, and died on April 11.

Then, just days after her mother died, Tawanda Johnson herself started feeling sick.

“My chest was real tight… I was gasping for air,” Johnson said. She had a fever, and her appetite was gone.

She went to the hospital on April 16, and tested positive for COVID-19.

She was released after six days, and has fully recovered.

But in the hospital she was largely alone, then had to quarantine for 14 more days, and said she feels like she still hasn’t properly mourned the death of her mother.

“It was very hard to grieve in this state,” Johnson said. “You’re alone. Everything is alone.”

She lost her job in the pandemic. Now Missouri wants her to give back $8,000.

‘Even the ones that turn out to be valid, they were not applicants trying to game the system,’ says a nonprofit attorney helping people appeal Missouri’s demands for repayment.

Next to Normandy High, a giant dumping ground on land owned by St. Louis County

For 20 years, the county's LCRA has collected land throughout the inner-ring suburb of Wellston. The mayor is fed up.

New homes on cusp in Wellston. But developer struggles to win resident support

Philanthropic builder Equity Homes, funded by a private foundation long active in the Normandy area, struggles to win over some in Wellston.

The only two female "market sales leaders" were fired and replaced by men, a former employee's lawsuit says.

The CBC report cites a briefing note from the president-elect’s transition team.

Sold-out sewing machines and quilt subscriptions: Sewing rockets 'off the charts' during the pandemic

With fewer cars on the road, the St. Louis region's air quality has improved in the pandemic

Experts are curious about what happens next. Will some changes to behavior and energy consumption stick? And will air quality stay better? 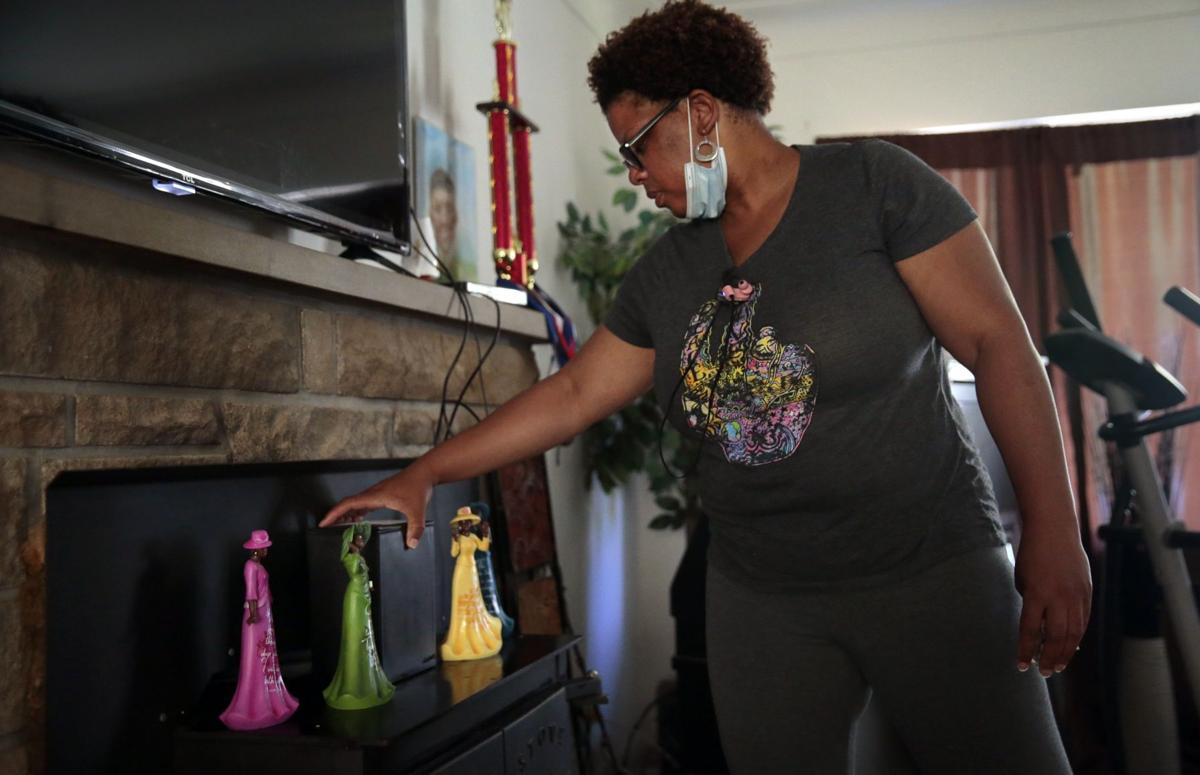 Tawanda Johnson sanitizes the box holding her mother's ashes and surrounding prayer ladies after picking up her cremains on Tuesday, June 2, 2020. "She's home," said Johnson of her mother Essie Belinda Johnson, who died at 69 from COVID-19. "She's going to bless this home while she's here." Tawanda Johnson also contracted the virus but survived after a six day stay in a hospital. Photo by Robert Cohen, rcohen@post-dispatch.com 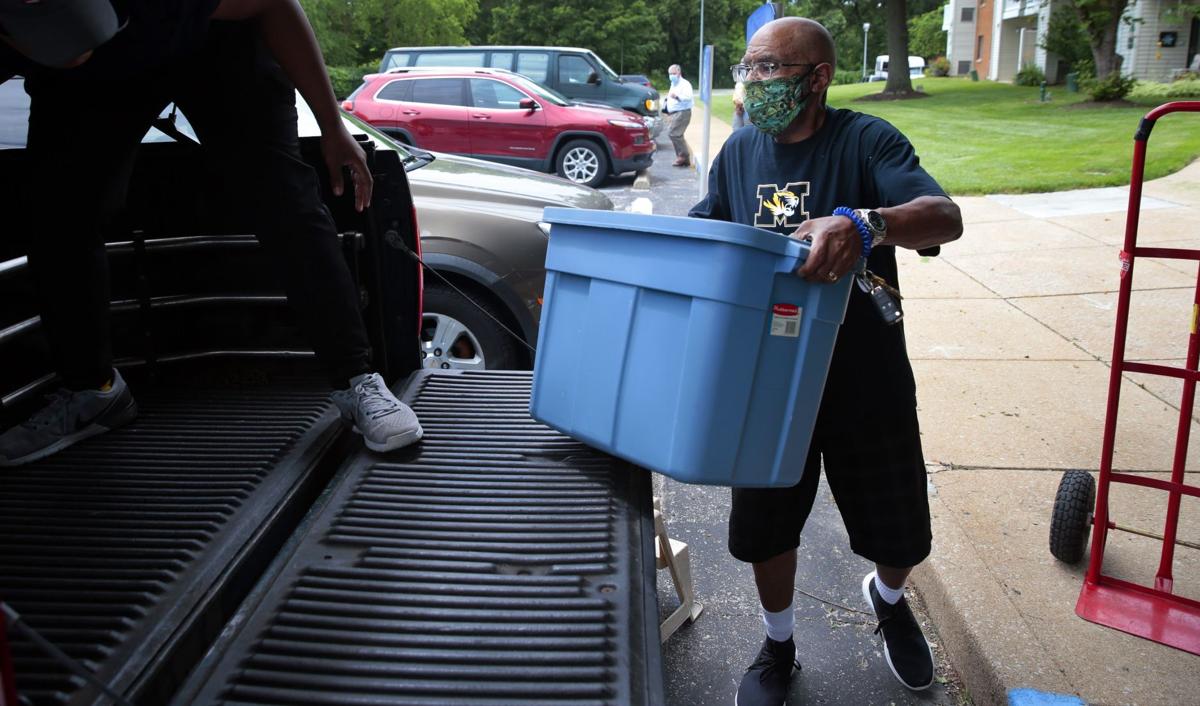 Michael Strawbridge removes the belongings of his sister Carol Strawbridge from her apartment at the Village North Retirement Community on Thursday, June 4, 2020. The 73-year-old retired educator died May 21 of COVID-19. Photo by Robert Cohen, rcohen@post-dispatch.com 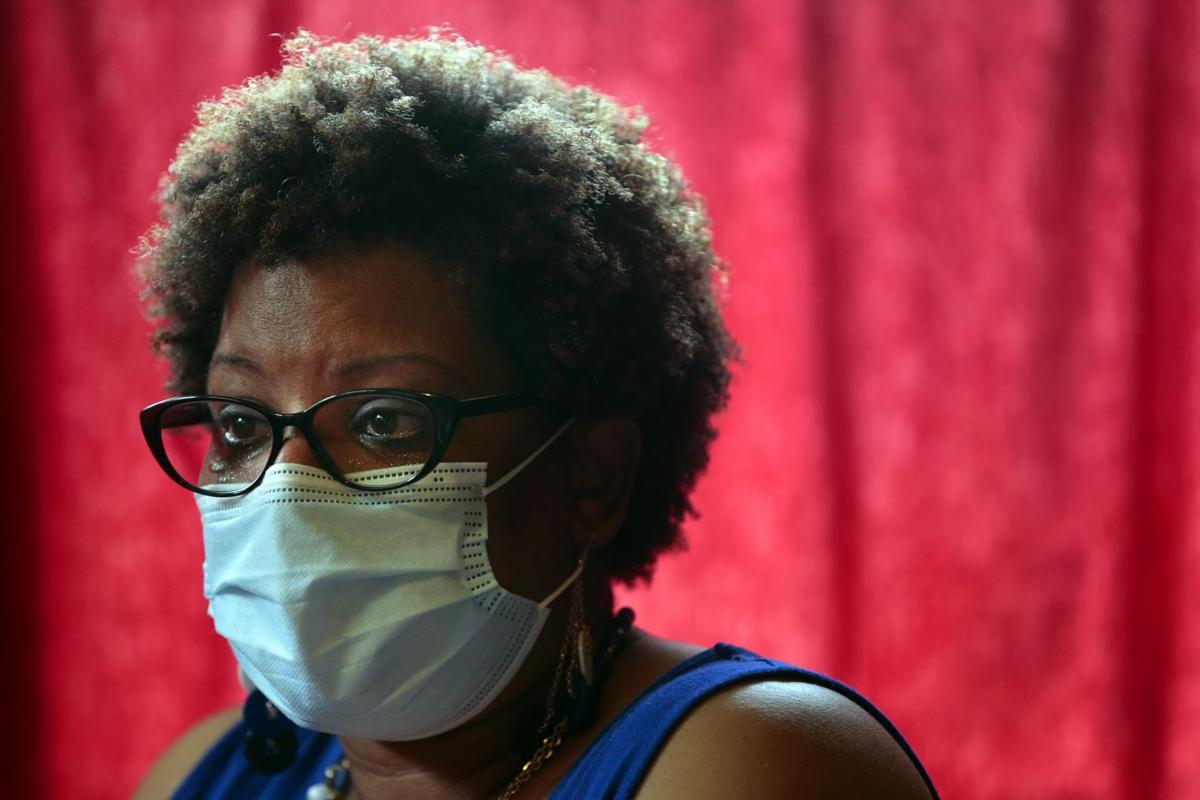 Tawanda Johnson speaks about recovering from COVID-19 herself after losing her mother to the virus, during an interview at her home on Friday, May 29, 2020. "It was very hard to grieve in this state," Johnson said. "You're alone. Everything is alone." Photo by Robert Cohen, rcohen@post-dispatch.com 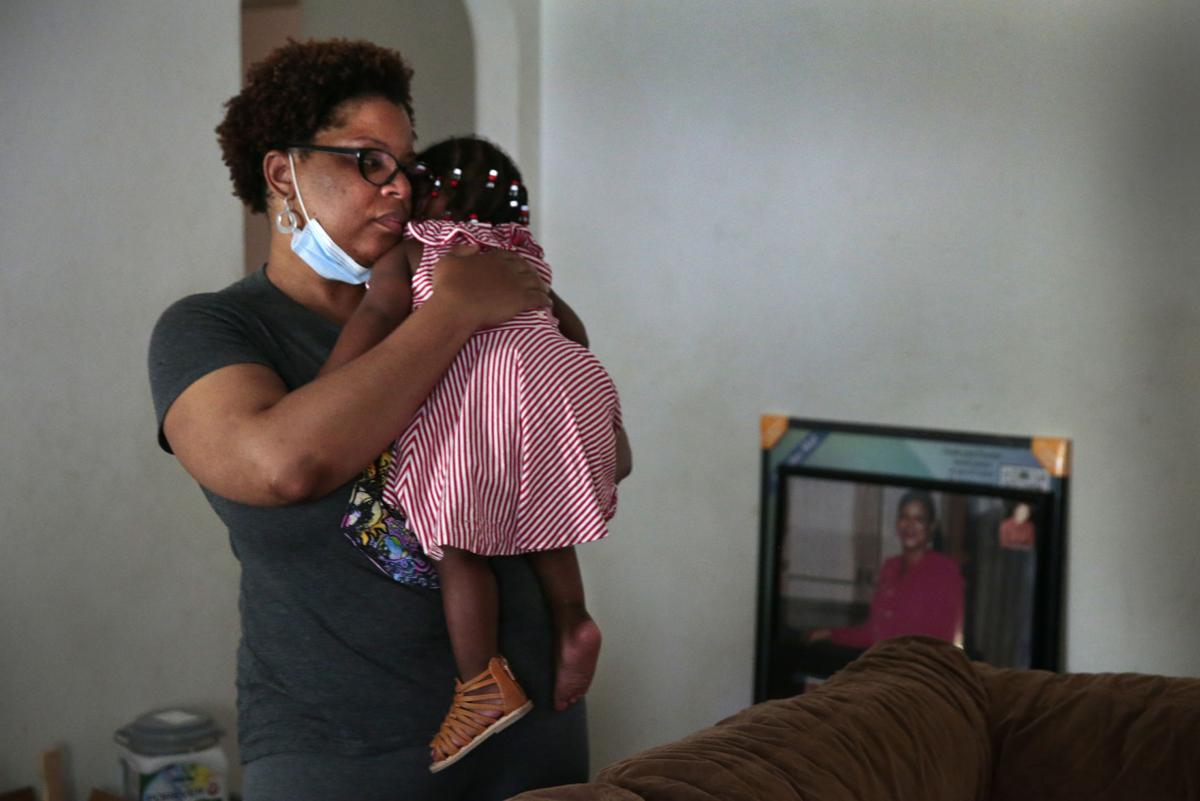 Tawanda Johnson gets her cousin Treasure Rhone up from a nap at her Ferguson home on Tuesday, June 2, 2020. A photograph of her mother Essie Belinda Johnson, who died at 69 from COVID-19, rests on the wall behind her. Johnson also contracted the virus but survived after a six day stay in a hospital. Photo by Robert Cohen, rcohen@post-dispatch.com 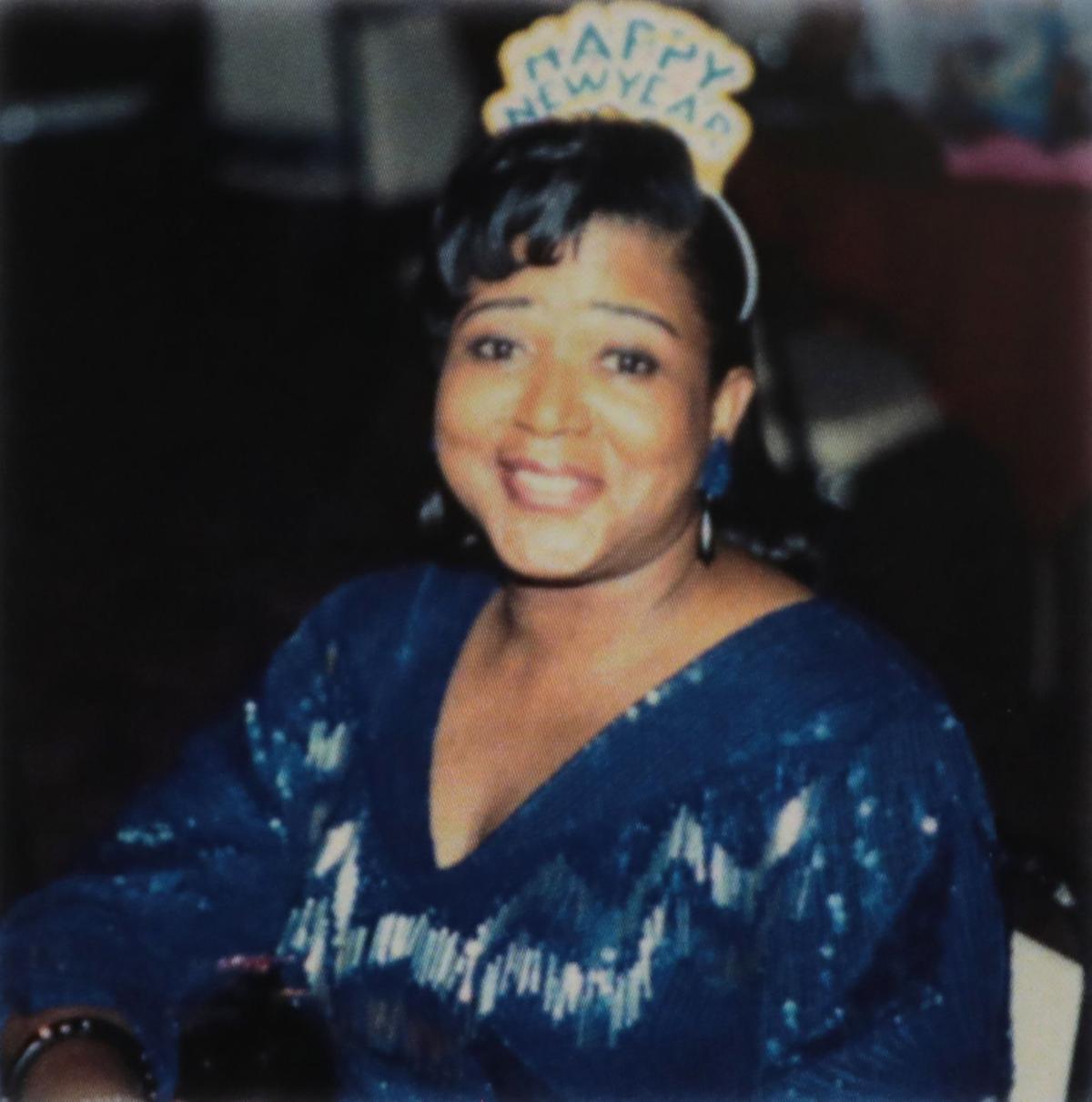 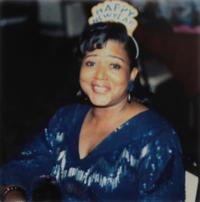 A photograph of Essie Belinda Johnson, 69, from her obituary program. Johnson died days after contracting COVID-19. Photo courtesy of the family.