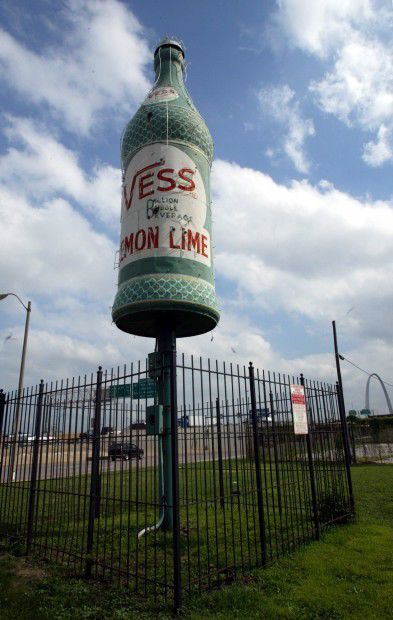 A giant Vess soda bottle, shown in a 2004 file photo, gave the Bottle District its name. Photo by Jerry Naunheim of the Post-Dispatch.

ST. LOUIS  •  Sometimes, a simple conversation can be worth $1.5 million. It was this week.

A chat with developer Paul McKee was what it took to get Alderman Freeman Bosley Sr. to change his tune and revive a bill he'd shot down last week that will let McKee tap nearly $1.5 million in state tax credits for his NorthSide Regeneration project.

Indeed not just revive it, but push the thing all the way through the city's Board of Aldermen in a quick series of votes on Friday.

The bill was a measure to combine the long-vacant Bottle District site with McKee's massive NorthSide plan, which would make McKee eligible for Distressed Areas Land Assemblage tax credits to reimburse his $12 million purchase. A bookkeeping fix is how McKee and city officials had described the bill, and it sailed through a committee hearing last month.

But apparently no one had briefed Bosley, whose Third Ward includes nearly half of NorthSide's two-square-mile project area. And so last week, as the measure moved through votes before the full board, the veteran alderman proposed tabling it until he could talk with McKee.

“No one has ever sat down with me and said what they were trying to do,” Bosley said at last week's meeting. “I don't see anything wrong with just holding this bill.”

The bill's sponsor, Alderman Tammika Hubbard, declined to do that. So when the bill came up for a vote, Bosley voted no. Seven colleagues joined him, and with more than half the board either abstaining or absent, that was enough to derail the bill.

It was a highly unusual break of the City Hall tradition of aldermanic courtesy, in which members don't block projects in other wards. And it was a rare rebuke of a big-dollar development deal, one that's had the strong support of both Mayor Francis Slay and Aldermanic President Lewis Reed.

But it didn't last long.

Aldermanic rules hold that a bill that is voted down on the floor can be revived a week later if an alderman who cast a “no” vote requests it. And 20 minutes into Friday's meeting, Bosley stood up and did just that.

From there, the tide swiftly turned.

With every alderman present, members voted 26-3 to place the Bottle District bill back on the agenda. Then they voted again to pass it on to third reading — the next stage in a bill's advancement. Then, a few minutes later, they agreed to suspend the rules and hold a third and final vote at the same meeting. They gave it final approval, 26-3. By 11 a.m., the Bottle District bill was on its way to the mayor's desk.

That was good news for Larry Chapman, a developer who's partnering with McKee on the Bottle District and who also sat down with Bosley this week. Now he's planning early next year to start marketing the 17-acre site to retail and office tenants, at a lower cost thanks to the tax credits.

"I'm thrilled. Now we can go do some work," he said. "We can cut loose and get going here."

A few other aldermen, particularly Scott Oglivie of the 24th Ward, objected to the plan, saying the city ought to wait until the Missouri Supreme Court rules on a lawsuit that has stalled NorthSide for more than two years. Others, like the 13th Ward's Fred Wessels, said aldermen should do what they can to help McKee.

But the key voice in the room Friday was Bosley's.

The board's longest-serving member picked up a big chunk of the NorthSide footprint in ward redistricting last year, but said he has never received a full briefing on it.

After his sit-down with McKee this week,  Bosley feels like he can explain the giant project better to his constituents, most of whom live in or near the neighborhoods McKee hopes to re-make over the next 20 years.

“He kind of took me for granted,” Bosley said after the meeting. “He's going to have to work closely with me, because this ain't the end of it.

“But I think he got the message.”

Measure, which would let McKee tap $1.5 million in tax credits, could be revived next week.

A giant Vess soda bottle, shown in a 2004 file photo, gave the Bottle District its name. Photo by Jerry Naunheim of the Post-Dispatch.