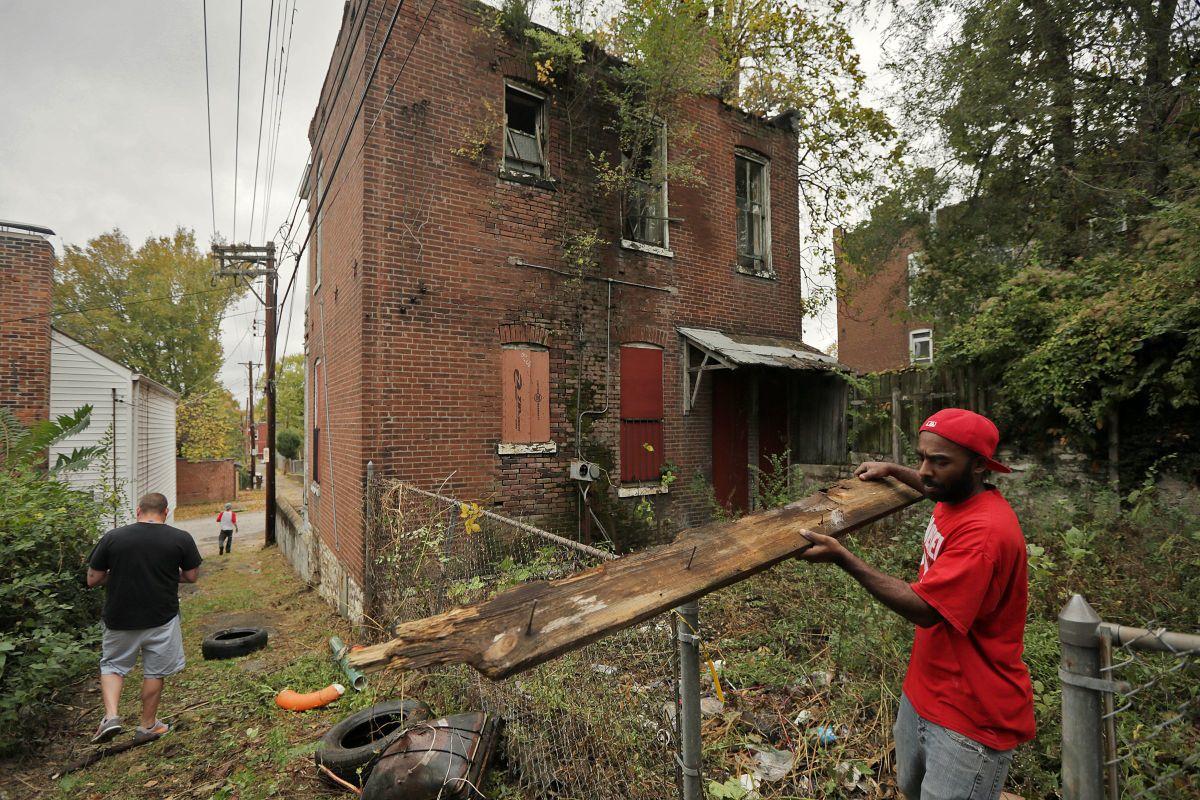 Craig Stevens (right) clears some of the debris at a vacant house on the 3600 blocks of Oregon Avenue, a property owned by developer Giro Katsimbrakis, on Wednesday, Oct. 28, 2015 in St. Louis. Photo by Huy Mach, hmach@post-dispatch.com 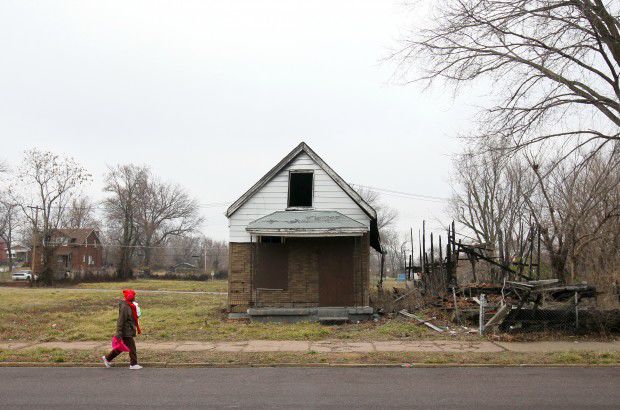 Ann Holmes, 46, of St. Louis, walks past a row of vacant lots and a pair of burned out homes owned by the St. Louis Land Reutilization Authority in the 4300 block of St. Louis Avenue on Thursday, Feb. 16, 2012. Photo By David Carson, dcarson@post-dispatch.com

Looking to chip away at the thousands of abandoned properties throughout the city, the St. Louis Development Corporation agreed Thursday help fund a new attorney at the region’s premier nonprofit legal clinic.

The city’s economic development arm approved spending $100,000 over two years to help fund a new position at Legal Services of Eastern Missouri, which is launching a vacant property initiative. Also contributing is the Bar Association of Metropolitan St. Louis.

“One of the main initiatives we have ongoing is vacancy,” said SLDC Director Otis Williams.

A lawsuit filed by the city this week argues Proposition NS, which allows the issuance of bonds to rehab vacant property, passed under state law.

The program is modeled after a similar effort in Kansas City, which provides $600,000 annually to Legal Aid of Western Missouri to help fight vacancy and return property to productive use within neighborhoods, according to an SLDC report.

“The essence of it is to ultimately make property available for the clients that we serve,” said Legal Services of Eastern Missouri Executive Director Dan Glazier.

The extra legal help should aid the city in getting the thousands of properties either abandoned or owned by its land bank, the Land Reutilization Authority, “back on the rolls,” Williams said. He hopes the extra legal aid can help the city clear property of liens so it can more easily transfer real estate to new owners, something he called “a big issue.”

Properties owned by the LRA

Source: Post-Dispatch analysis of data from the City of St. Louis Assessor

“We know that vacant properties have such a difficult and negative impact on a neighborhood and a community and on crime,” Glazier said.

The new effort is an extension of its existing community development work, Glazier said. He pointed to the group’s community economic development program, which helps entrepreneurs set up their own businesses or community groups establish nonprofit organizations.

“This is a new project for us,” he said of the vacancy effort. “But it is very consistent.”

Like other programs run by Legal Services of Eastern Missouri, not only does its own staff work to help its clients, but it gets local attorneys looking for volunteer opportunities involved in its various missions. The new work on vacant property and community development should not be different.

“The decision by SLDC to make this kind of commitment is a real tangible example of the city’s support for this effort,” Glazier said.

Craig Stevens (right) clears some of the debris at a vacant house on the 3600 blocks of Oregon Avenue, a property owned by developer Giro Katsimbrakis, on Wednesday, Oct. 28, 2015 in St. Louis. Photo by Huy Mach, hmach@post-dispatch.com

Ann Holmes, 46, of St. Louis, walks past a row of vacant lots and a pair of burned out homes owned by the St. Louis Land Reutilization Authority in the 4300 block of St. Louis Avenue on Thursday, Feb. 16, 2012. Photo By David Carson, dcarson@post-dispatch.com