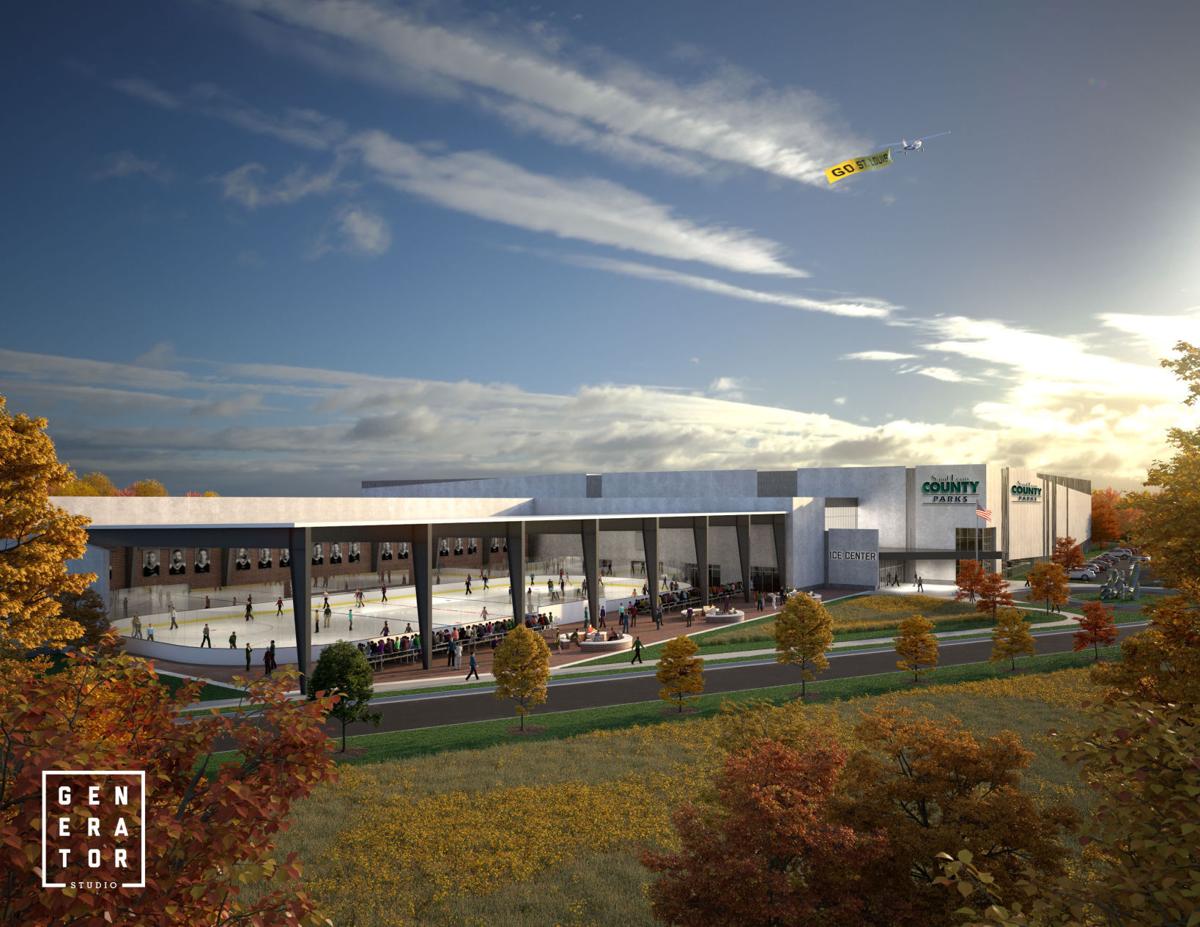 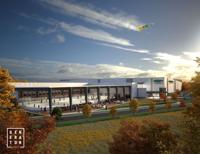 A rendering of the proposed four-rink ice complex in Creve Coeur Lake Memorial Park that would be developed by St. Louis County and the St. Louis Legacy Ice Foundation. 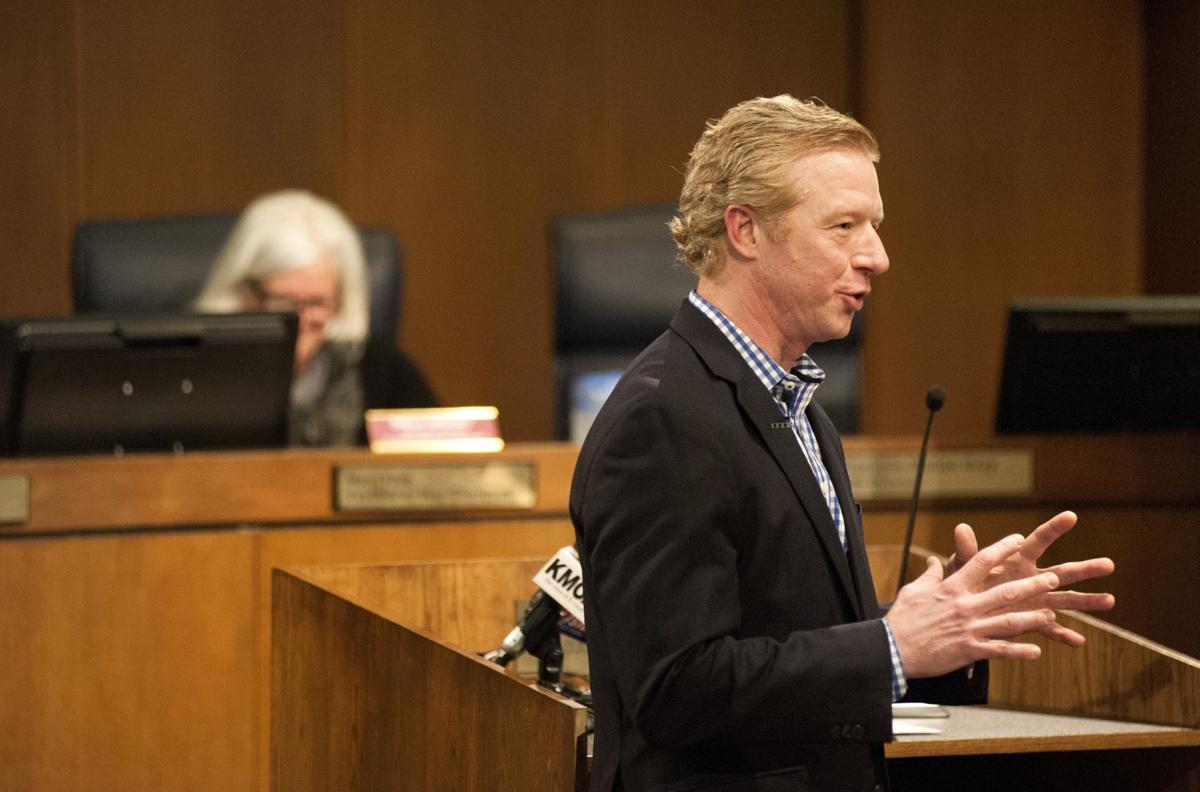 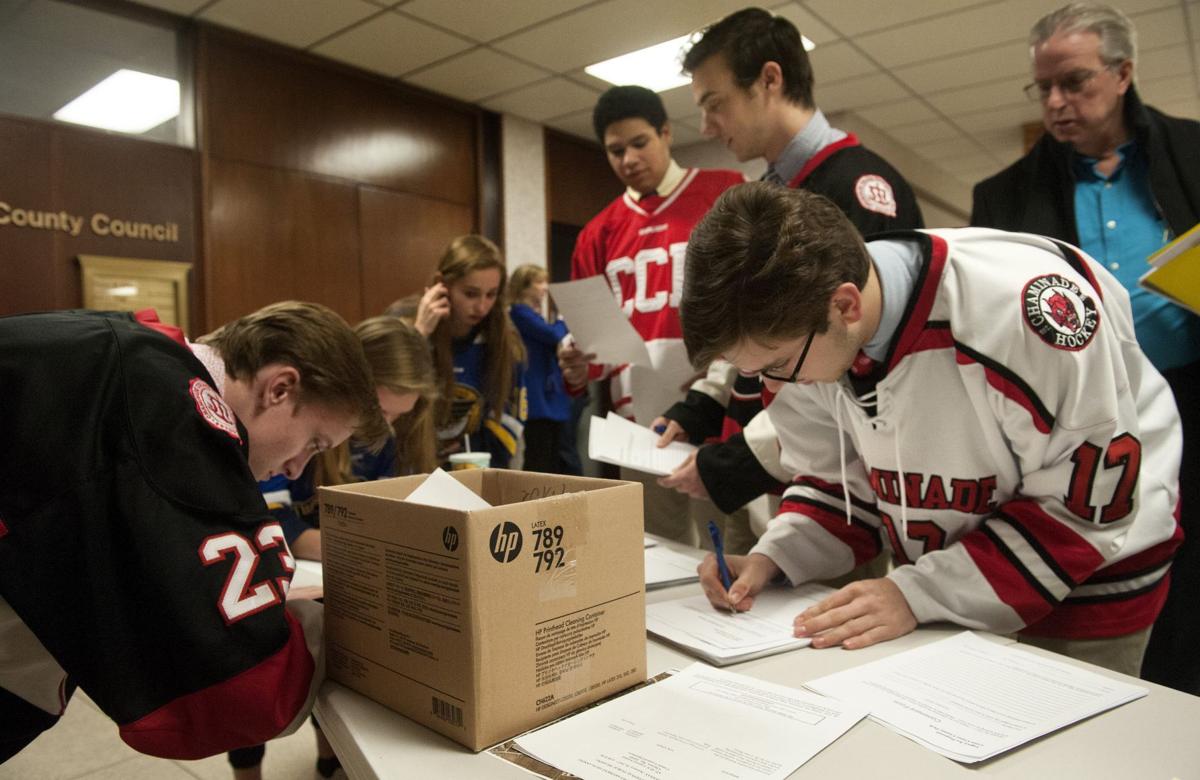 CLAYTON • A new practice facility for the St. Louis Blues moved closer to reality Tuesday after the St. Louis County Industrial Development Authority gave preliminary approval to issue up to $45 million in tax-exempt bonds that would help finance the complex.

But whether the professional club, youth hockey groups and the public ultimately get access to a new four-rink complex is far from a done deal.

St. Louis County and the group spearheading the project, the St. Louis Legacy Ice Foundation, are still firming up a financing package dependent on many organizations beyond the Blues committing to long term leases of ice time. Plus, the National Park Service will need to sign off on the facility’s proposed location, in the northeast corner of Creve Coeur Lake Memorial Park.

“It’s such a tremendous project, I hope we can bring it to fruition,” said Sheila Sweeney, executive director of the St. Louis Economic Development Partnership, whose staff oversees the county’s industrial development authority. “It’s a great addition to the park and it’s great for youth and sports.”

The county would own the land and buildings and lease them to the Legacy Ice Foundation, which would operate the St. Louis Ice Center. Documents submitted to the IDA identify $14 million in project equity, which Legacy Ice Foundation Chairman Patrick Quinn said would come from “many donors that have stepped up to make our vision for a world-class skating facility a reality for our region and its citizens.”

Financing details submitted to the board say the Blues would make a $7 million capital contribution toward construction costs and a $500,000 contribution from the Blues for Kids Foundation to support operations during the first three years. IDA documents also list a $7 million bridge loan for the facility and indicate the remainder of the financing would come from $38.3 million in IDA bonds.

The St. Louis County Council in December approved a measure giving County Executive Steve Stenger the authority to negotiate a lease with the Legacy Ice Foundation.

“The (St. Louis County) Council approved what they needed to,” Sweeney said. The final bond package would have to come back to the IDA board for final approval “if the negotiations go well,” she said.

The bonds, which would be paid from Ice Center revenue, could receive at least a partial guarantee from the county. “It’s a possibility, but we’re just still negotiating it,” Sweeney said.

Another hurdle is an apparent requirement to secure approval from the National Park Service to build on the site. Local environmental groups contend such a complex would violate federal rules.

“We do know it’s part of the designated area the federal government identified as being restricted to outdoor recreation only,” said Charles Bell, an architect who has followed the project.

He said the organization he belongs to, the American Institute of Architects St. Louis, along with the Open Space Council, the Sierra Club and the Missouri Coalition for the Environment, all oppose building the facility near the park and plan to submit a formal opposition letter to the state and federal park service soon.

“It looks like there may be a reason to have additional hockey facilities, especially for kids, but just not in the worst environmental location they could have chosen,” Bell said.

Kat Dockery, executive director of the Open Space Council for the St. Louis Region, said it has been difficult to get information on the project from the county.

“The county hasn’t been very clear about who’s paying for what and who’s doing what,” she said.

The St. Louis County Port Authority has been supporting the project using its revenue stream of lease payments from the River City Casino in Lemay. The entity has established a “Sports Recreation Initiative” that has paid lawyers for the efforts behind the ice rink and a nearby youth soccer complex that started construction in April.

Sweeney said St. Louis County hopes to submit an application to the Missouri Department of Natural Resources next month. It needs to conduct an in-depth environmental assessment as part of the application, she said. The Port Authority held a special meeting in April to approve a $150,000 contract with Geotechnology Inc. for environmental services on the site.

While project documents submitted to the IDA board say construction could start next month, Quinn said construction wouldn’t begin in July. Sweeney said she expects it will take several more months to secure state and federal support for the project.

Once construction on the $44 million structure begins, Quinn said the group hopes to finish the facility in 14 months. Total project costs are estimated at $59.3 million, including bond reserves and interest costs, according to financing details submitted to the board.

The Blues, currently practicing on a rink at the St. Louis Outlet Mall in Hazelwood, would be only one of many users.

The plan lists several youth and amateur hockey organizations that would commit to leasing space, including AAA Blues Youth Hockey, Lady Cyclones, Lindenwood University and Maryville University. The plan also lists BJC Star Rehab as a potential user of 13,000 square feet of space. A 3,000-square-foot retail store and a small pro shop are also part of the plan.

Legacy Ice also mentions an expansion team from the United States Hockey League, made up of players 20 years old and younger that Quinn called “a launching point to the NHL.” Plans call for a 3,500-seat venue and dedicated locker rooms for the team.

The plan emphasizes that the potential tenants are “preliminary expectations” and that many of the user agreements need to be finalized.

The city of Maryland Heights has already said it will provide up to $6 million for site preparation in exchange for public programming and community events hosted at the ice rink facility.

Editor's note: This article was updated to clarify that the Great Rivers Habitat Alliance has not taken a formal position on the ice rink.

The total project cost is estimated at $40 million. The 250,000 square foot facility would hold four ice rinks, including one outdoors, and would be on land owned by St. Louis County on the north side of Creve Coeur Lake Memorial Park.

A rendering of the proposed four-rink ice complex in Creve Coeur Lake Memorial Park that would be developed by St. Louis County and the St. Louis Legacy Ice Foundation.