ST. LOUIS COUNTY — A St. Louis-area debt collection company has been ordered to pay more than $24 million after allegations that the company and its co-owners pursued money that consumers did not actually owe, and employed a range of unlawful practices, according to Wednesday filings in U.S. District Court.

According to the legal complaint from the Federal Trade Commission, Midwest Recovery Systems, a third-party debt collection business based in Earth City, would collect “phantom payday lending debts, purported medical debts, and other debts that (the company is) consistently unable to verify.”

The lawsuit said that since 2015, the defendants, representing Midwest Recovery Systems, have reported more than $98 million to consumer reporting agencies for a range of debts including unauthorized or counterfeit payday loans, debts involving unresolved claims of fraud, “and even debts that consumers already paid.”

“Defendants have continued to collect millions of dollars’ worth of these alleged debts despite being inundated with thousands of consumer complaints each month,” the lawsuits reads.

Court documents state that the defendants have collected money using tactics such as “debt parking,” where the company adds alleged debts to consumer credit reports without first trying to communicate with those customers about the money in question.

“Defendants have continued to collect these debts even after receiving multiple red flags that these debts were invalid,” the lawsuit says. “When consumers have been able to dispute the existence of these purported debts, Defendants have regularly concluded that 80-97% of disputed debts are either inaccurate or invalid. Defendants have obtained an estimated $24.3 million in gross revenues as a result of their unlawful debt collection practices.”

The legal complaint against MRS stated that the company fielded more than 24,000 disputes tied to debts from one specific source “notorious in the debt-collection industry for being unauthorized or counterfeit,” with a history of fabricating loans and facing FTC enforcement actions.

Although Midwest Recovery Systems “could not or did not verify” more than 87% of the debts from that source, identified as Joel Tucker, the company continued to collect on them, “including by parking these debts on consumers’ credit reports,” according to the complaint.

The company has now been ordered to pay back a matching sum of $24.3 million, according to a corresponding court order, also filed Wednesday.

Additionally, the order permanently restrains the defendants and anyone involved with them from providing information to any consumer reporting agencies without first informing consumers of information about the debts in question, including the amount and the creditor associated with each. Consumers must now also be given a 30-day period to dispute the validity of any debts.

Tumber said his company was a collection agency that received information about debts from clients, and was then held responsible for errors in the data by the FTC. He said any errors were limited, and were among millions of accounts that they serviced. He said the partners ran out of money to fight the federal government.

Tumber said MRS was sold to CACi, another debt collection agency, in September 2019. He said the FTC forced Tumber and the others to forfeit their profits from the sale, including Tumber’s interest in CACi, “and took every dollar I had to my name.”

The order filed Wednesday was signed in early October. It specifically demanded payment of $56,748 from Tumber, and also required him to sell or divest his ownership interest in CACi within 21 days, while surrendering the proceeds of the deal.

Other co-owners of MRS, Kenny Conway and Joseph Smith, were also named as defendants. The order they signed neither admitted nor denied the allegations in the legal complaint. 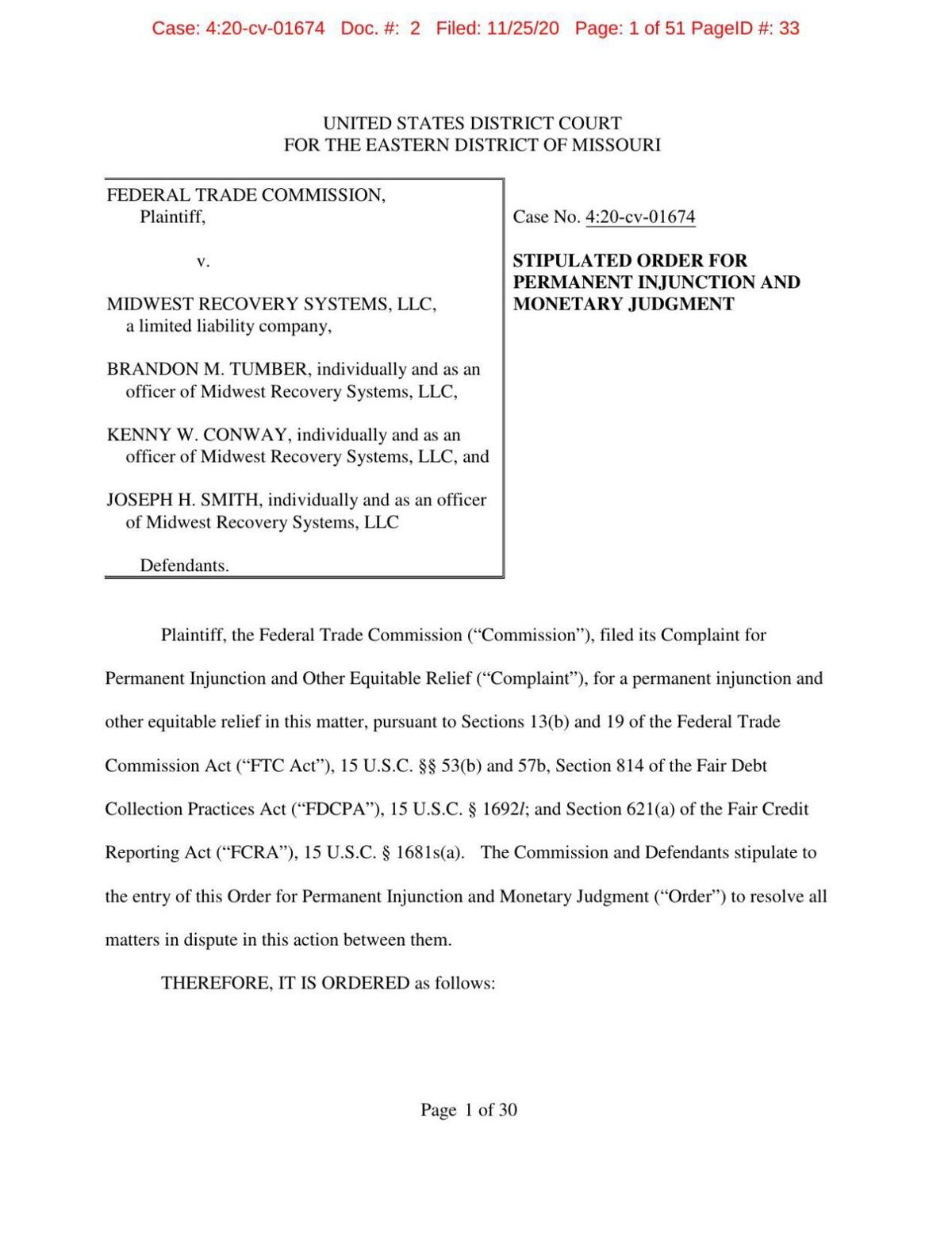