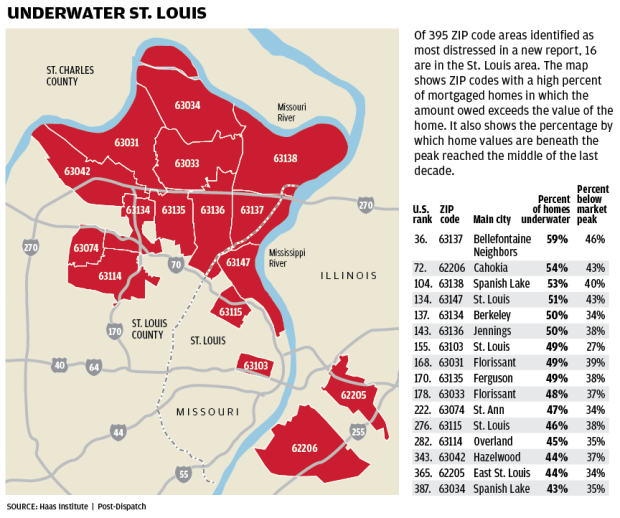 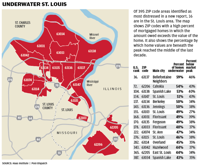 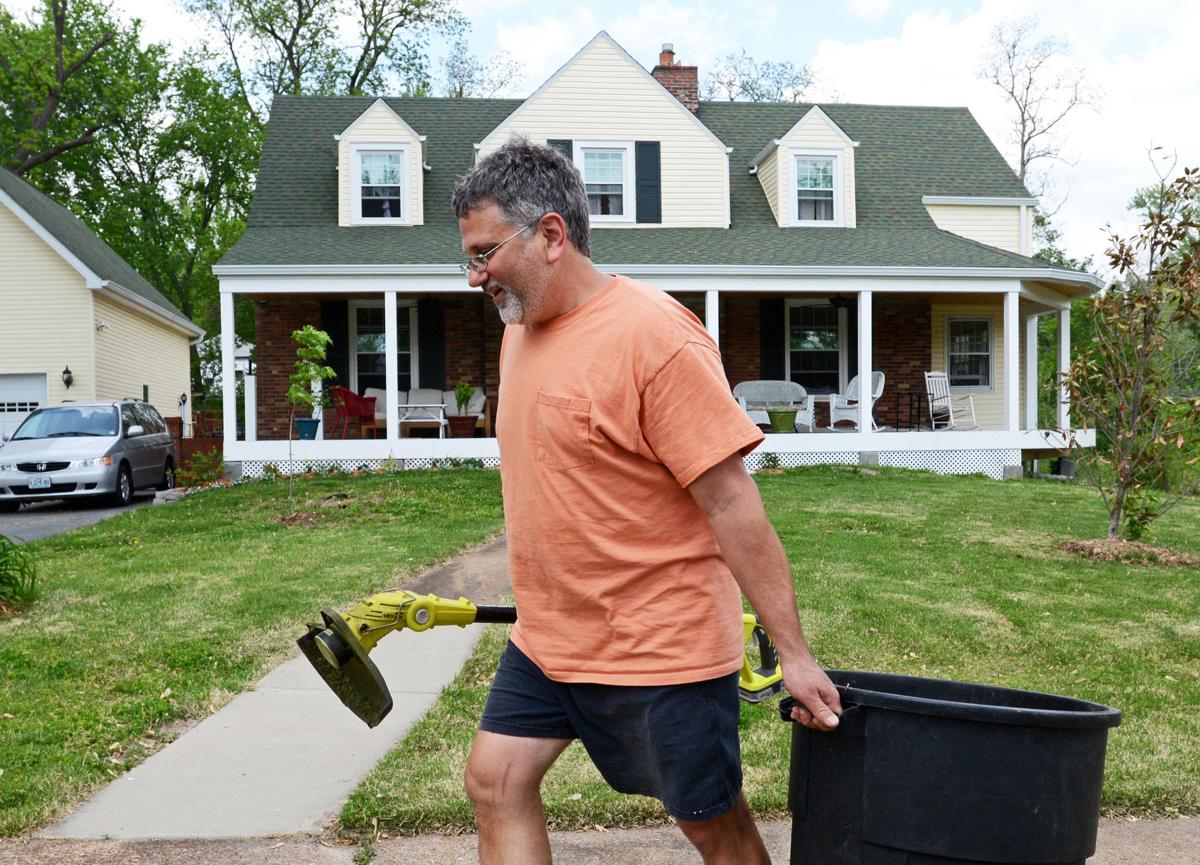 Nick Kasoff finishes doing yard work on a rental property he owns located next to his home in Ferguson, in background, Thursday, May 8, 2014. Photo by Roberto Rodriguez

Metro St. Louis is a national hot spot for “underwater” mortgages, according to a new study, and the problem is particularly acute in north St. Louis County.

Half or more of homeowners with mortgages owe more than their homes are worth in ZIP code areas covering Bellefontaine Neighbors, the Spanish Lake area, Berkeley and Jennings. The same is true in Cahokia, Ill., according to the study by the Haas Institute in Berkeley, Calif.

In all, 16 St. Louis-area ZIP code areas ranked among the nation’s worst in terms of homeowners stuck with their houses due to mortgage debt. Of that number, 11 were in North County, three in St. Louis city and two in the Metro East area.

People who owe more than their homes are worth can’t sell unless they can bring a big check to the closing, or convince the bank to take less than it is owed. They are said to be “underwater” or “upside down” on their loans.

They are roughly twice as likely as others to default on their mortgages, leading to foreclosure. Some argue that stressed owners are less likely to improve their homes, or even maintain them, and that can affect the surrounding neighborhood.

“I decided in 2011 not to make a major new investment in it, like a new kitchen or new floors,” he said.

Then he took a job in O’Fallon in St. Charles County, and found himself commuting an hour to work. “I’m a father, and I don’t want to spend all that time on the road,” he said.

So, he moved his family close to his work and put his house on the market in March. “The highest offer we got was for $70,000,” he said. That offer was from an investor who wanted to rent it out.

While paying for two homes, he’s hoping to persuade Bank of America to accept less than it is owed — a so-called short sale.

The Haas Institute is a think tank at the University of California at Berkeley. It used estimates on underwater homeowners and home values from Zillow, the real estate website.

Zillow says that 24 percent of homes with mortgages in the St. Louis area were underwater as of December. CoreLogic, a private real estate data firm, puts that estimate at a much lower 12 percent.

By Zillow figures, the St. Louis area ranked 13th in underwater mortgages among all metro areas with more than 1 million people. The 16 local ZIP code areas were ranked among 395 across the U.S. with the highest concentrations of underwater homes.

Most of those neighborhoods also had large concentrations of “subprime” mortgages issued through the middle of the last decade. Such high-interest loans were made to people whose income or credit history ruled out conventional mortgages, and many eventually defaulted.

When home prices fell, and unemployment rose, North County neighborhoods developed some of the region’s highest rates of foreclosures.

Until recently, North County had been trailing behind the rest of the region in the housing market’s slow recovery. But the most recent Zillow estimates give hope that North County prices might be starting to rise.

As of March, Zillow estimated home values had risen over the year in Berkeley, Ferguson, Florissant, St. Ann, the Spanish Lake area, Jennings and Overland — all areas with big underwater problems. Prices were lower in Bellefontaine Neighbors and Hazelwood.

As prices rise, they will slowly bail out homeowners, but some could have a long wait. Prices in the metro area are still 15 percent below their 2007 peak, according to Zillow, but the hole is deeper in much of North County.

“It’s not a crisis for me because we’re not looking to move,” says Kasoff, a work-from-home computer consultant and part-time landlord. “We just put a front porch on our house.”

But one of his neighbors in the same situation simply left for a job in Louisiana, letting the bank take the house. Kasoff bought it for $30,000 and rents it out.

There is debate about whether underwater homes harm a neighborhood. Chris Krehmeyer says he hasn’t noticed any damage in his work as president of Beyond Housing, a nonprofit organization that works on housing in the troubled Normandy School District.

“It’s clearly not good for the psyche of the homeowner,” he said. “But if you have a good job and are comfortable with the neighborhood, you can live with being underwater,” he said.

Homeowners who can’t leave have a special interest in keeping the neighborhood nice, notes William Rogers, an economist who studies local housing at the University of Missouri-St. Louis. They might become better neighbors with more civic involvement.

But an underwater mortgage puts that homeowner in extra peril, he notes. People with equity in their houses can sell them if they hit financial trouble, walking away with money in their pockets and a good credit rating. That’s not an option for an underwater homeowner who loses a job.

That leads to a higher foreclosure rate for underwater homeowners, says Peter Dreier, a professor of politics at Occidental College and an author of the Haas report. Boarded-up buildings damage neighborhoods, he says.

“It is devastating, not only for the families, but for neighborhoods and entire cities,” he says.

The Haas report argues that Freddie Mac and Fannie Mae, the big federally controlled mortgage companies, should solve much of the problem by simply reducing mortgage amounts to the current value of the home. If they won’t, then cities should follow the example of Richmond, Calif. That troubled town wants to take mortgages by eminent domain, paying the banks less than they are owed and passing the savings to homeowners.

A spokesman for the Missouri Mortgage Bankers Association was unavailable for comment.

Improvements in North County could make progress toward city-county unification

The unification of the city and county is a possibility, if you get some of the problems in North County off the books. All you had to do was …

Lots of opportunities to buy in North County

Regarding your front-page headline “ ‘Underwater’ in North County” (May 9):

As the president of the Hazelwood School District Board of Education, I am writing to you on behalf of our 18,000 students, members of our Boa…

The city's director of housing and community development talks about new program to lure in new residents.

Mortgage rates may be feeding shortage of homes for sale

About half of current home owners have below-market mortgages.

Real-estate agents say they have more buyers than sellers in metro St. Louis.

Home building: Residential construction is still depressed, even as demand for houses seems to be picking up. Jim Gallagher and David Nicklaus…

It's below 1 percent for the second month in a row.

Nick Kasoff finishes doing yard work on a rental property he owns located next to his home in Ferguson, in background, Thursday, May 8, 2014. Photo by Roberto Rodriguez