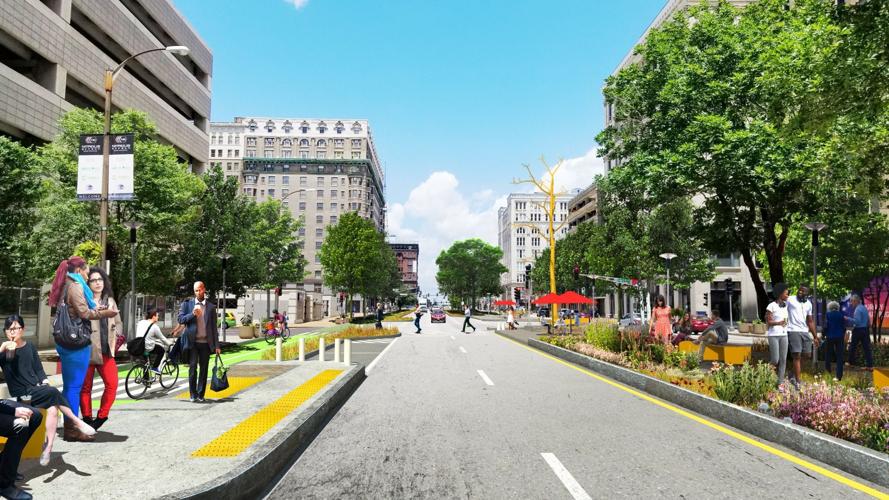 A rendering of Tucker Boulevard as imagined by Design Downtown STL 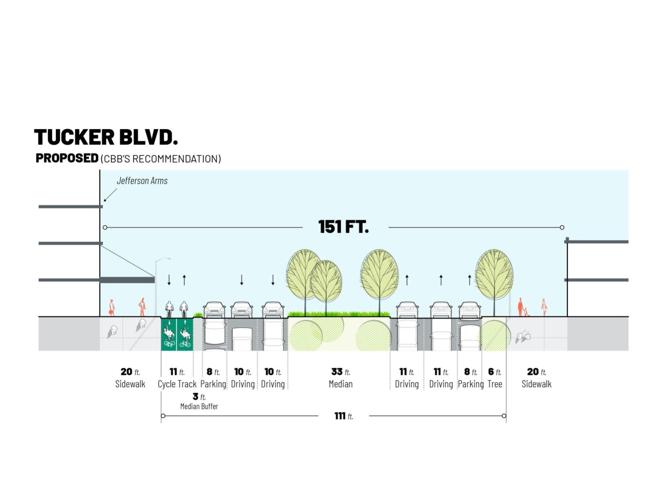 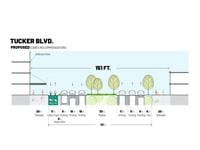 A rendering by Design Downtown STL of Tucker Boulevard with the proposed changes. 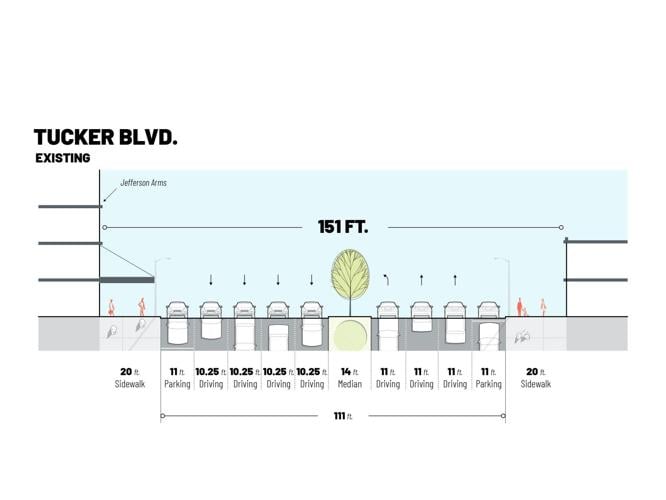 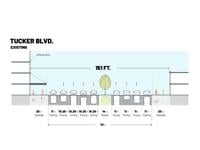 A rendering by Design Downtown STL of Tucker Boulevard showing the existing configuration of traffic lanes. 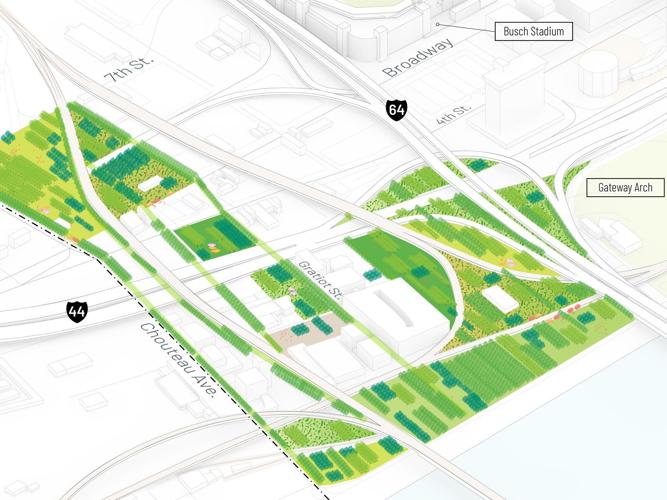 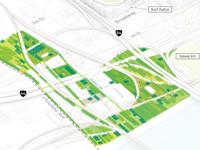 A rendering by Design Downtown STL of Chouteau's Landing orchard and park. 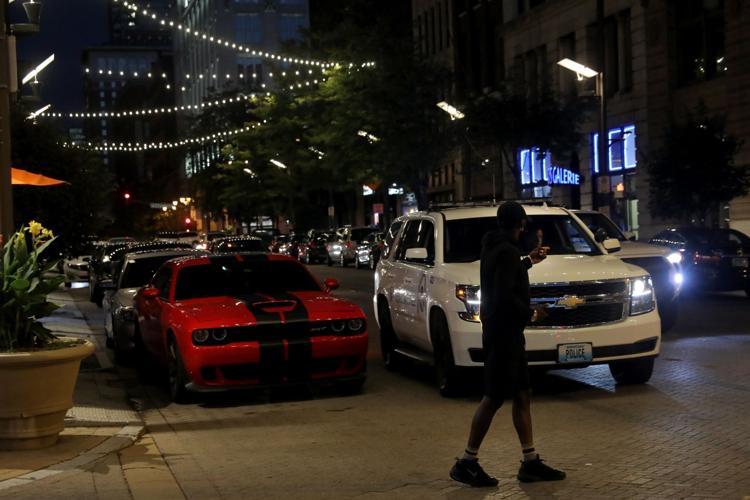 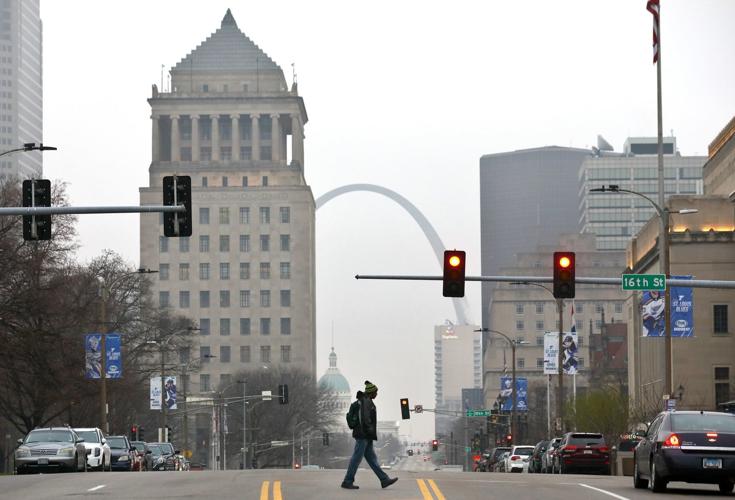 Market Street in downtown St. Louis on Wednesday, during the city's second full day of a stay-at-home order designed to slow the spread of the coronavirus.

Those are some of the key recommendations of a new plan, developed over the last year, meant to guide investment in Downtown St. Louis over the next decade. The new “Design Downtown STL Plan” updates older downtown plans conducted 10 and 20 years ago. Now nonprofit Downtown STL Inc. wants residents from around the region — not just people who live and work downtown — to send their feedback.

“This is the downtown for the region,” Downtown STL President and CEO Missy Kelley said.

Building regional interest and ownership of downtown is one of the key hurdles facing the plan’s backers, particularly as the area, like other downtowns, suffers the effects of the coronavirus pandemic more acutely than most neighborhoods. Activity is down as daytime office employees work remotely, and tourists and visitors are absent without conventions, sports and events. Small businesses and restaurants have shuttered, and crime has spiked. City officials have had to block some streets to deter cruisers who have taken advantage of downtown’s wide, empty streets in recent months.

Some of the problems from low foot traffic predate the pandemic. Despite the doubling of downtown’s residential population in the last decade and hundreds of millions of dollars spent on downtown projects — Ballpark Village, Union Station, Kiener Plaza, the Gateway Arch Grounds, Soldier’s Memorial and the Central Library — too much of the area’s activity occurs in pockets, during the workday, or during major events.

Public safety issues can be alleviated with more activity, the plan argues, be it more residents, more events or more small businesses.

In the middle of a pandemic, more activity is a tall order. But Scott Page, a principal with Philadelphia-based Interface Studio, which led the planning process over the last year, said the coronavirus doesn’t mean much of the work called for in the document has to wait for a vaccine or a return to normalcy. Just look at parks that are “overrun with folks looking for opportunities to get outside.”

The city and Downtown STL can start to work on initiatives to narrow thoroughfares such as Tucker Boulevard, Page said.

“Tucker is wider than the highways that go through downtown,” Page said. “You look at a Tucker Boulevard, or Market or Olive, streets that are really, really wide and you start to realize there are opportunities there to integrate more green space that allows people to be outside and socially distance. But we also need to couple that approach with programming.”

The Design Downtown STL plan, a $600,000 document funded by Downtown STL’s private foundation, will go to the city planning commission after public comments close Oct. 4. When adopted as an official city neighborhood plan, it will help guide how the city spends money downtown.

The downtown Community Improvement District, which levies a special property assessment that collects about $3.5 million a year, may also pay for some initiatives. But the district expires at the end of 2021, and needs approval from downtown property owners and the city Board of Aldermen to extend its life another decade. Kelley said she hopes to have aldermanic approval by the end of the year.

If extended, the district would split off from Downtown STL Inc. and focus solely on safety, beautification and infrastructure, leaving economic development and marketing to Downtown STL Inc.

But it’s running up against a group of disenchanted downtown residents and investors. They formed their own group, Citizens for a Greater Downtown St. Louis, and are opposing the extension of the CID without a change in strategy on more pressing issues, such as public safety.

Les Sterman, a member of the group and a former planner himself at the East-West Gateway Council of Governments, said the Design Downtown plan is too focused on the physical environment and won’t be relevant until “we establish a sense of order downtown.”

“The best economic development strategy is to provide the right conditions for growth, and in our case that’s making downtown clean, safe and attractive,” Sterman said. “But this plan is likely to be obsolete long before we deal with any of the problems and have the resources to actually implement it.”

Nicklaus: Civic Progress, a leader and lightning rod in the past, cedes its role in favor of ‘bigger umbrella’

As five civic organizations merge, the group that once epitomized corporate power in St. Louis will essentially cease to exist

Economic Partnership to launch own strategic planning effort, one of five in region

Contract with New York-based HR&A Advisors, Inc. is the latest strategic planning effort by regional economic development organizations amid a shift in leadership.

The projects have bicyclists in mind as several groups work to build more pedestrian-scale infrastructure connecting the city.

Why gas prices are finally letting up and for how long

Why gas prices are finally letting up and for how long

A rendering of Tucker Boulevard as imagined by Design Downtown STL

A rendering by Design Downtown STL of Tucker Boulevard with the proposed changes.

A rendering by Design Downtown STL of Tucker Boulevard showing the existing configuration of traffic lanes.

A rendering by Design Downtown STL of Chouteau's Landing orchard and park.

Market Street in downtown St. Louis on Wednesday, during the city's second full day of a stay-at-home order designed to slow the spread of the coronavirus.