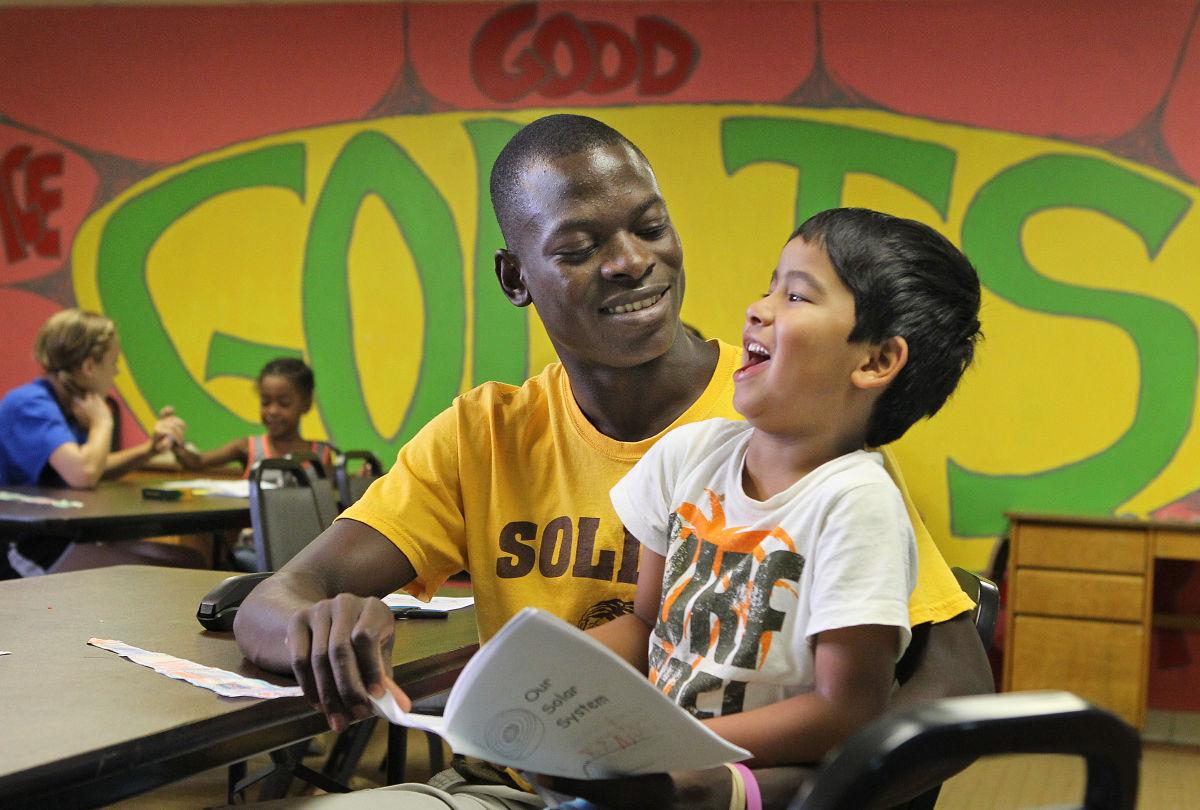 Nyonbio Yorke, 17, a Soldan student originally from Liberia, reads with Rahin Guragai, 6, during a summer school program run by New City Fellowship in St. Louis on Wednesday, July 10, 2013. Yorke is working as a teacher's assistant during the summer program. Photo by Stephanie S. Cordle, scordle@post-dispatch.com 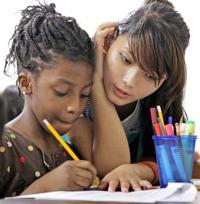 Manju Bhattarai, 18, originally from Nepal, helps Gbenesira Linus, 7, with math during a summer school program run by New City Fellowship in St. Louis on Wednesday, July 10, 2013. Bhattarai is working as a teacher's assistant during the summer program. Photo by Stephanie S. Cordle, scordle@post-dispatch.com

ST. LOUIS • Nyonbio Yorke isn’t sure what else he’d be doing this summer. Maybe playing soccer. Hanging out.

Instead, the 17-year-old Soldan High School student is getting up with the sun and walking to work at a summer school program for young children at New City Fellowship Church in the city’s Tower Grove South neighborhood.

“Sometimes it’s kind of hard to get up so early,” Nyonbio says with a smile. “But it’s a lot of fun.”

Nyonbio is one of about 200 teens heading off to work through a new summer jobs program being launched by MERS Goodwill, the Incarnate Word Foundation and the city of St. Louis. It’s a $400,000 effort — organizers are already raising money to grow next year — to help boost several city neighborhoods and the young people who live there.

The summer job has long been a rite of passage for many teens. But lately jobs been harder to come by. Competition from adults — many of whom are also struggling to find work — cutbacks in government spending and a sluggish retail recovery mean fewer opportunities are out there. The number of 16- to- 19-year-olds in Missouri with a job has fallen by more than 50,000 since 2003, according to Labor Department figures. That’s a 38 percent drop, most of it since 2008.

“Those first jobs are harder to get now. There are actual legitimate adults taking these positions,” said Hilary Wagner, vice president for program services at MERS Goodwill. “That makes it hard to get good work experience.”

The area has long had programs to help teens find summer jobs — run by St. Louis County, the Urban League, the city’s workforce office, among other groups. This one, called STL Youth Jobs, is funded by the city and donations from a wide range of banks, foundations and local companies. What makes it unusual is that it is intensively neighborhood-focused.

All of the kids, and most of the employers, are in seven specific city neighborhoods, four on the north side, three on the south. Organizers picked places that had large teen populations and relatively high crime rates, then went door-to-door to businesses in those neighborhoods asking if they’d be willing to take on a summer worker, with the paycheck covered by the program.

“We wanted to try and concentrate our effort so we could see what kind of impact it could have,” said Bridget Flood, executive director of the Incarnate Word Foundation. “We focused on places with lots of youth and high youth unemployment.”

Along with teaching valuable job skills and giving kids a chance to earn some spending money, city officials hope the program will have another side benefit: Reducing crime. Getting young people into jobs and off the streets makes them less likely to get into trouble, said Maggie Crane, a spokeswoman for Mayor Francis Slay.

That’s one reason the city contributed $100,000 in public safety funds — enough to cover 50 jobs — and why Slay worked the phones to raise private donations from local companies for more. It was also important, Crane said, to put these jobs close to where the kids lived, instead of making them schlep across the city every day.

“We knew that we had to reach youth more readily in these areas, where services were not as plentiful,” Crane said. “And we specifically went after businesses in these areas so that kids had an opportunity to get to work. We don’t want them spending an hour each way to get there.”

That certainly made it easier for Treviel Sanders. The 18-year-old, who’s going to be a senior at Oakville High School in the fall, has worked after-school jobs at Busch Stadium and at a Delmar Gardens nursing home in Chesterfield. But walking the few blocks from her home in Keokuk Street in Dutchtown to her summer job at Refabulous Clothing Exchange on Meramec Street makes for a much simpler trip to work.

And, really, Treviel is glad to have a job. She’d been looking all over for something this summer, but wasn’t finding much. After a cousin got into STL Youth Jobs, she tried too, and now works 20 hours a week helping out around the store.

The program also helps the store, said manager and co-owner Toni Fox. The three-year-old resale boutique has two summer workers, paid for by STL Youth Jobs, which means it could hold off a few months on hiring extra paid staff. Meanwhile a couple of neighborhood kids get some work experience.

“They have definitely helped us out and we’re glad to help them out,” Fox said.

For New City Church, the two high school-age kids they hired replaced college-age volunteers who’ve helped with the summer school in recent years, said Kristin Boe, the church’s children’s ministry coordinator. That volunteer program was on hiatus this year, and when Boe heard about STL Youth Jobs, she saw an opportunity. Then she heard that two teenage members of the church had signed on. She hired them right away.

“They’re younger than some of our helpers in the past, but it has been fun to watch them take ownership of their jobs,” Boe said. “You see a lot of growth.”

For Manju Bhattarai, it’s a first job. The 18-year-old Nepali immigrant had been looking for part-time work when she heard about this program. Now along with Nyonbio she’s helping the teachers and doing office work at New City’s summer school.

“It’s been a little harder than I expected,” he said. “But it has been great.”

Networking and job-skills group ran for years past original plan.

Report's author thinks results could be teens' "reaction to what happened to their own family circumstances."

Nyonbio Yorke, 17, a Soldan student originally from Liberia, reads with Rahin Guragai, 6, during a summer school program run by New City Fellowship in St. Louis on Wednesday, July 10, 2013. Yorke is working as a teacher's assistant during the summer program. Photo by Stephanie S. Cordle, scordle@post-dispatch.com

Manju Bhattarai, 18, originally from Nepal, helps Gbenesira Linus, 7, with math during a summer school program run by New City Fellowship in St. Louis on Wednesday, July 10, 2013. Bhattarai is working as a teacher's assistant during the summer program. Photo by Stephanie S. Cordle, scordle@post-dispatch.com