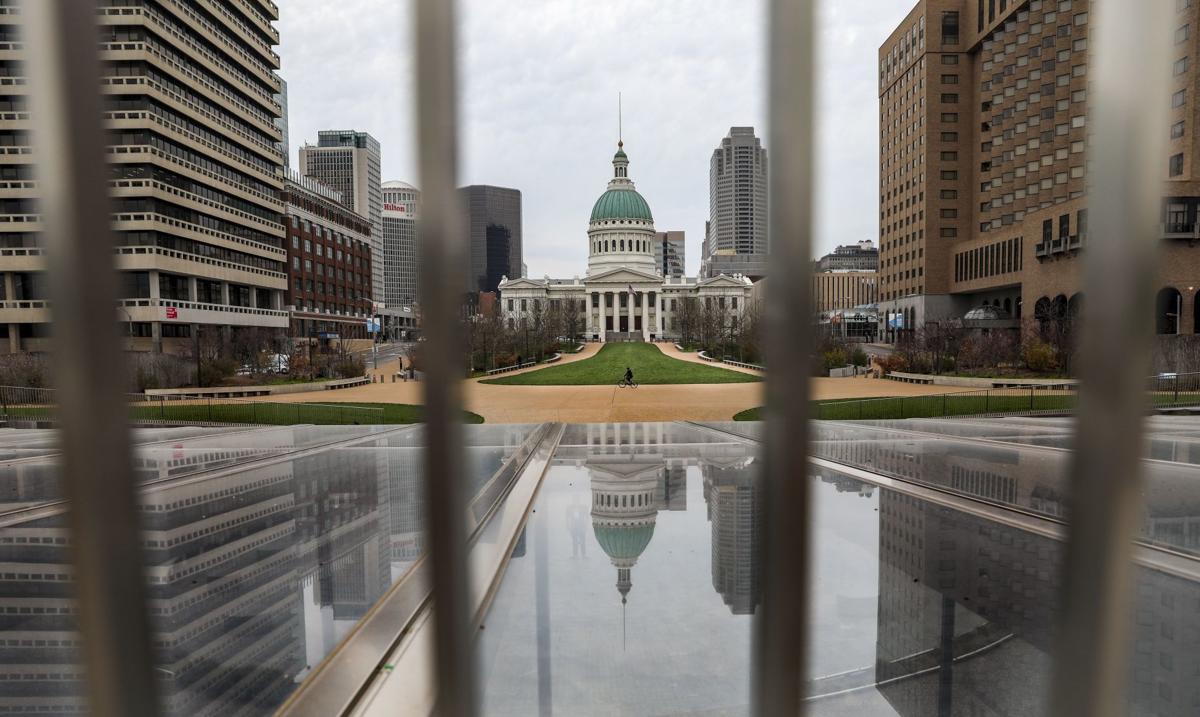 A person bikes in front of the Old Courthouse on the Gateway Arch National Park grounds in St. Louis on Friday, March 27, 2020. With a stay at home order in effect across St. Louis city and county many popular St. Louis attractions sit empty as the coronavirus pandemic halts normal life across the country. Photo by Colter Peterson, cpeterson@post-dispatch.com. 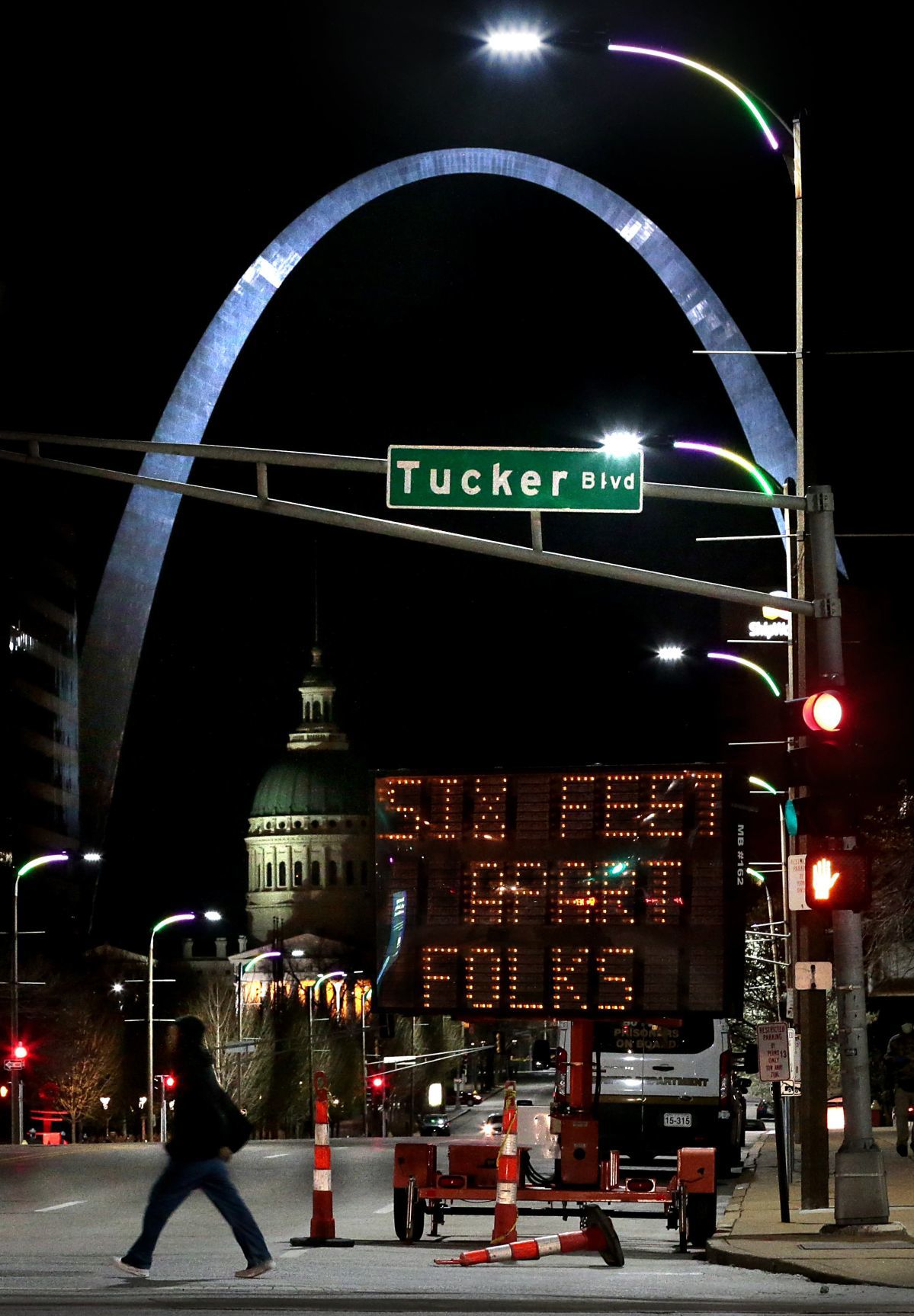 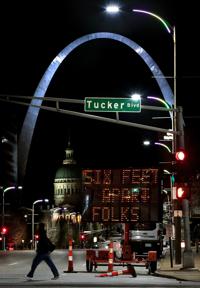 A message board reminds people about social distancing during the coronavirus pandemic at the intersection of Market Street and Tucker Boulevard in downtown St. Louis on Monday, March 30, 2020. Photo by Robert Cohen, rcohen@post-dispatch.com

ST. LOUIS — The massive surge in unemployment insurance claims during the coronavirus shutdown has created a backlog of applicants in Missouri that, at times, may have stretched past 100,000, leaving residents frustrated and checkless.

But new data from the U.S. Department of Labor now also sheds light on the backlog created by the deluge:

In Missouri, only about 230,000 of the 399,000 claims filed from March 15 through April 18 were added to the unemployment rolls, according to the federal figures. That processing rate, at about 58%, puts Missouri behind many other states. Illinois, for instance, added about 558,000 people out of the 738,000 who filed in that time, or about 76% of the new claims.

The data indicates that the state is either not keeping up with the unprecedented number of claims, or denying benefits to people it deems ineligible.

“In normal times, the second point tends to apply generally,” said Ben Herzon, an economic analyst and executive director at IHS Markit in Clayton. “Not all claims become insured unemployment because the claimants do not qualify for benefits. But in the current situation, I’m inclined to lend more credence to the first point.”

Part of the issue, he said, could be that many self-employed workers and gig workers who did not previously qualify for unemployment applied in March or early April. They became eligible for unemployment under the federal stimulus legislation, but until last week, Missouri’s unemployment program was not able to process those workers.

A spokeswoman for Missouri’s Department of Labor said Thursday that the state has paid more than 76% of the claims covered under the state’s unemployment program. The “vast majority” of those who haven’t been paid, she said, are still within the employer protest period — the 10-day period after an employer is notified one of its employees filed a claim.

Regardless of the reason, the delay has left some angry at what they call the state’s slow response to sometimes desperate claims.

Paul Bergman, a self-employed sales and marketing consultant in the St. Louis area whose clients dried up during the crisis, said he applied in March, before the state changed its system, and was denied. Now he would likely be eligible but he can’t get through on the phone to explain his situation.

“I have tried calling every day since I was rejected,” Bergman told the Post-Dispatch in a text message.

It’s like calling into a radio station contest, he told his wife.

“But it’s not fun,” he said. “And you have no way to earn money or get assistance.”

From March 15 to April 11, the state added about 204,000 of 340,000 claims, or about 60%, to its unemployment rolls. That put Missouri behind 36 other states, according to calculations by the New York-based Century Foundation, a progressive think tank.

But in the new figures released Thursday, which reflect claims filed the week ending April 18, the state added 26,000 to the unemployment program while some 59,000 Missourians applied that week. Illinois, on the other hand, added 113,000 people to its unemployment rolls, more than the 103,000 who made initial claims that week.

New U.S. Department of Labor data from earlier in the week showed how few initial claims in March resulted in quick payments. In Missouri, only 7,232 workers received their first payments in March, despite over 196,000 initial claims filed — making Missouri the 45th-worst. Only South Carolina, Florida, Minnesota, Arizona and Indiana were worse, according to the Century Foundation.

The think tank noted that federal rules give states up to 21 days to make an initial payment, and that the rate will likely be far higher when April data is released. Many people have told the Post-Dispatch that they have begun receiving their Missouri unemployment benefits in recent weeks.

Still, the data underscore the delay many have endured awaiting unemployment checks.

“We’ve heard countless stories across the nation of the record number of workers who tried to file for unemployment, only to be met with crashing websites, unreachable phone lines, and states unable to process claims,” said Andrew Stettner, senior fellow at The Century Foundation.

“Even among the workers fortunate enough to have their claims processed, the overwhelming majority did not receive emergency relief in March.”

Missouri took five years to recover from the Great Recession, and unemployment now is higher than the peak of 9.8% in 2010.

As unemployment slows and St. Louis region readies to reopen, some workers will lose benefits

The reopenings put workers at odds with bosses, who must report to the state if employees refuse offers to return to work.

Missourians filed 27,000 unemployment claims last week, the lowest level since the shutdowns to control the pandemic began in mid-March but still well above weekly claims numbers even in the depths of the Great Recession a decade ago.

The last time that many unemployment claims were filed in the state, it was January 2010, as the country began its long recovery from the Great Recession.

Another week of high jobless claims in Missouri and Illinois, but pace of new filings slows

‘What are we supposed to do?’ Service workers hardest hit by coronavirus closures

For thousands of workers in St. Louis — and millions around the country — there is no ‘working from home.’ There’s just no more work.

A person bikes in front of the Old Courthouse on the Gateway Arch National Park grounds in St. Louis on Friday, March 27, 2020. With a stay at home order in effect across St. Louis city and county many popular St. Louis attractions sit empty as the coronavirus pandemic halts normal life across the country. Photo by Colter Peterson, cpeterson@post-dispatch.com.

A message board reminds people about social distancing during the coronavirus pandemic at the intersection of Market Street and Tucker Boulevard in downtown St. Louis on Monday, March 30, 2020. Photo by Robert Cohen, rcohen@post-dispatch.com