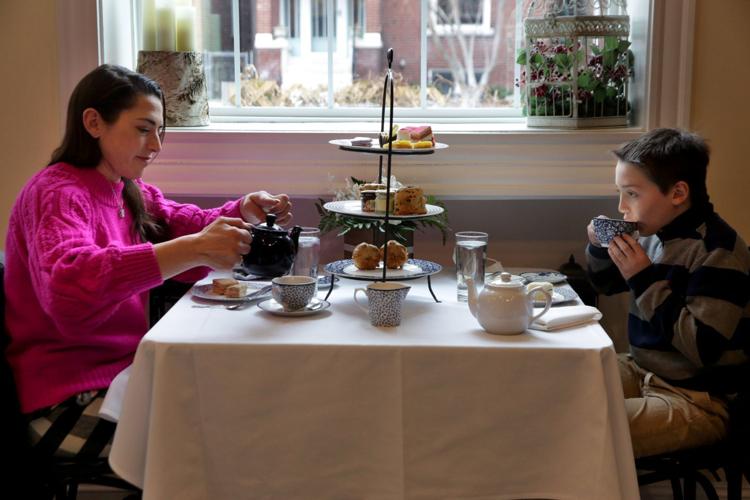 Anna Sweeley, and her son, Oliver, 10, enjoy Afternoon Tea, which includes tea and an assortment of pastries and finger sandwiches, Thursday, Jan. 27, 2022, at the London Tea Room. Oliver saved up his money to treat his mother to a special day. Photo by Hillary Levin, hlevin@post-dispatch.com 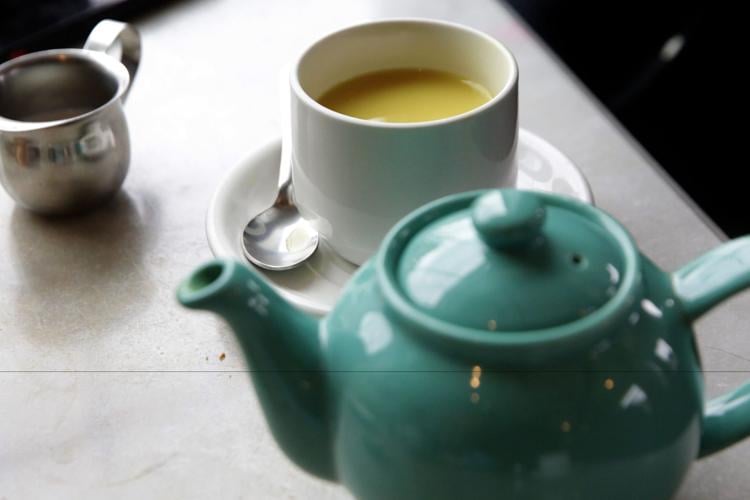 A customer's cup of turmeric ginger tea sits on a table, Thursday, Jan. 27, 2022, at the London Tea Room on Morgan Ford in St. Louis. Photo by Hillary Levin, hlevin@post-dispatch.com 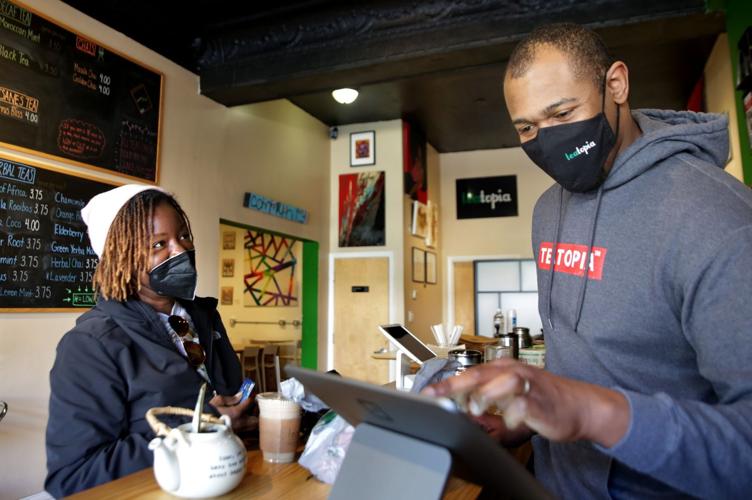 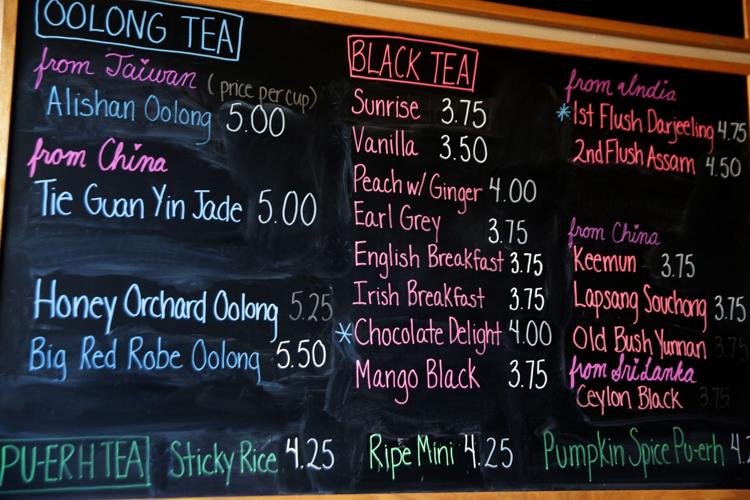 A view of one of the menu boards at Reginald Quarles' Teatopia on Cherokee Street, in St. Louis. His shop offers made-to-order teas, smoothies and wraps. Photo by Hillary Levin, hlevin@post-dispatch.com 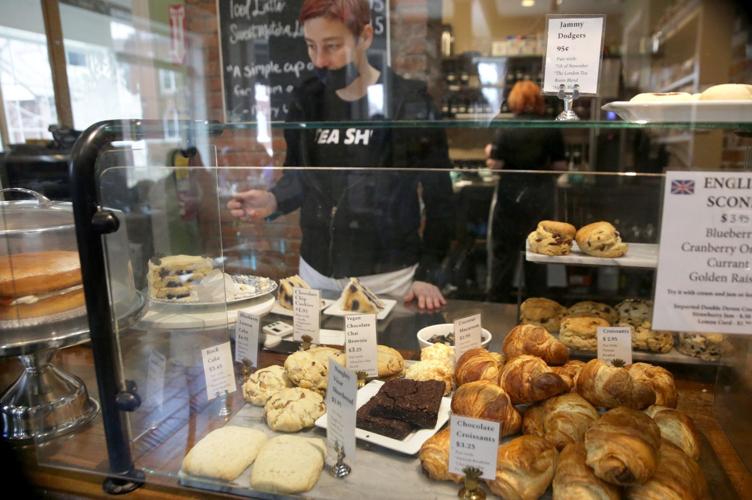 Barista Trisha Paige plates an order from the pastry case, Thursday, Jan. 27, 2022, at the London Tea Room on Morgan Ford in St. Louis. The tea room offers a large selection of teas and pastries to pair with the teas. Photo by Hillary Levin, hlevin@post-dispatch.com

ST. LOUIS — Michael Foster of Kansas City thawed out during a cold Saturday of sight-seeing last month with a stop at Teatopia on Cherokee Street.

The college freshman was visiting his girlfriend while on winter break. The couple studied chalkboards listing dozens of choices before Foster settled on honey orchid oolong — $14.50 for an ounce of loose leaves.

Teatopia owner Reginald Quarles topped off the bag with an extra scoop to accommodate any margin of error in brewing, and slipped Foster a business card so he could email with any questions.

“One of the great things about tea,” Quarles told Foster, “is that you could never know everything about tea.”

The beverage — the second most consumed in the world, behind water — is following an upscale trajectory similar to craft beer, coffee and artisanal cheese. High-end tea drinkers are consuming 20% more tea than they did two years ago, according to the Tea Association of the United States. And they’re not supermarket teas: They’re blends like maple walnut sencha, jade cloud and peppery purple tulsi.

In the past few years, St. Louis-area tea sellers have been expanding their shops and commandeering space on retail shelves and in coffee houses. Changing consumer tastes have fed the growth, business owners say, but so has a preference for natural, sustainable ingredients and an appreciation for the deliberate, unhurried brewing-and-sipping experience.

For Quarles, making tea is meditative.

“I can’t reach that moment of clarity just sitting still,” he said.

The calm settles in while he is weighing out the dried leaves, spooning them into an infuser, waiting for the water to heat and keeping time as the tea steeps.

Quarles earned a degree in psychology and was working in managed care when he opened Teatopia five years ago — as a different means of promoting mental health, he says. The store, a few doors down from his current location, was so small he could touch both side walls at the same time.

He moved into a space twice as big a year later and expanded his menu, which includes tea-infused smoothies. In early 2020, he upgraded his website to accommodate the demand for online sales, which had spiked even prior to the pandemic.

Tea can be calming or invigorating, social or solitary. Studies have found its antioxidants and polyphenols reduce inflammation and cell damage and improve blood pressure. Tea drinking has been linked to a lowered risk of certain cancers.

‘Tea is a lifestyle’

Lisa Govro wanted to promote “food as medicine” when she started selling Big Heart Tea a decade ago from a trailer she would park at farmers markets.

Her first flavor, Cup of Sunshine, like all herbal teas, isn’t technically a tea at all. Teas — black, white, green and oolong — are brewed with leaves from the camellia sinensis plant, a native of East Asia. Herbal drinks, made of edible flowers, barks and spices, get lumped in because they are also infused. Cup of Sunshine includes turmeric, ginger, peppercorn and cinnamon.

“We use simple blends,” said Govro. Most of Big Heart’s products have no more than five ingredients.

In 2018, Big Heart won a $50,000 Arch Grant, for St. Louis startups, to help source directly from growers. By then, the company had ditched the trailer in favor of a permanent home in the Gravois Park neighborhood. They make eight “signature” teas, like minty blue Royal Treatment and chamomile Cozy Night, plus about a dozen specialty flavors.

The pandemic flipped their business model, from selling loose blends to restaurants to targeting consumers directly through grocery and online sales. Bagged tea — free of plastic and sporting heart-shaped “you are awesome” tags — became their main vehicle.

In December, the company was awarded a $100,000 follow-on Arch Grant, which Govro says will help with supply-chain issues and rising material costs as Big Heart extends its reach and introduces new products, like mix-your-own matcha sticks.

“People are looking for alternative drinks,” Govro said. “Tea is a lifestyle.”

Steve Findley of Maplewood dropped coffee in favor of tea about a decade ago, then upgraded to loose leaf after receiving some as a gift. He lives just a couple blocks from Traveling Tea on Sutton Boulevard and gets his fix there.

Irish breakfast, a robust black tea with a reddish tint, is his go-to, but lately he’s been unwinding in the afternoon with green teas.

“I have expanded my horizons a little bit,” said Findley. “In the same way I learned about wines, I’m learning a whole lot about geography with tea.”

Traveling introduced Kateri Meyer to tea’s possibilities back in the early 2000s. It was when she was home in St. Louis that she felt hemmed in by her choices.

“There was nowhere to really get tea,” she said.

When she would complain about it, her friends urged her to do something. So in 2009, Meyer set up Traveling Tea as a stand at Tower Grove Farmers’ Market, offering a dozen varieties. By 2013, she had squirreled away enough money to open the Maplewood storefront. She now stocks more than a hundred types of tea.

Even when she switched to online and curbside ordering during the pandemic — the 500-square-foot shop just reopened in December — her sales kept increasing.

“People are becoming more conscious about where their food comes from across the board,” Meyer said.

Sarah Hirsch of Kirkwood likes tea for the connection it creates between her and her third child, 12-year-old Lucas. The mother of four tries to carve out time for a special activity with each of her kids, and Lucas took to tea early.

“It pairs really well with the whole ‘being present in the moment’ thing,” Hirsch said.

Lucas likes to fix mugs for the two of them, and he’s not too fussy about the procedure.

“I just use our fridge water,” he said. “I make it in the microwave, not on the stove.”

Hirsch took the sixth grader to the London Tea Room last year to sample something a little more gourmet. The outing was a hit.

“I want to expand my tea tastes,” said Lucas.

The London Tea Room boasts owners who brought their tea expertise here from England. Jackie James’ parents opened the café in 2007 as an adjunct to their imported furniture store on Washington Avenue. Five years later, they stopped selling furniture and, in 2014, the tea room relocated to Tower Grove South.

Their bestseller — by a 2-to-1 margin — is a black tea blend, the Naughty Vicar.

“I think it’s partly the name,” said James, with a laugh.

Sally Kent, who drives over from Belleville once a month to stock up, prefers an oolong with hints of apricot, buckwheat, toasted rice and dandelion. It’s called Iron Goddess of Mercy.

That was John Wolbers’ experience as a kid when he would try his dad’s tea.

“I thought it was disgusting,” he said. “In retrospect, I think my father was just buying terrible tea.”

During college, Wolbers embraced coffee. But when he began courting his wife a dozen years ago, they would meet up at the London Tea Room. Now, they take their 3-year-old daughter with them.

“We go through a pot a day,” Wolbers said. “It’s just nice to curl up with tea.”

Neman: Iced tea and beer outside the COVID cocoon

Our intrepid food writer slowly begins to emerge from his pandemic hibernation and discovers a whole new world of food.

Anna Sweeley, and her son, Oliver, 10, enjoy Afternoon Tea, which includes tea and an assortment of pastries and finger sandwiches, Thursday, Jan. 27, 2022, at the London Tea Room. Oliver saved up his money to treat his mother to a special day. Photo by Hillary Levin, hlevin@post-dispatch.com

A customer's cup of turmeric ginger tea sits on a table, Thursday, Jan. 27, 2022, at the London Tea Room on Morgan Ford in St. Louis. Photo by Hillary Levin, hlevin@post-dispatch.com

A view of one of the menu boards at Reginald Quarles' Teatopia on Cherokee Street, in St. Louis. His shop offers made-to-order teas, smoothies and wraps. Photo by Hillary Levin, hlevin@post-dispatch.com

Barista Trisha Paige plates an order from the pastry case, Thursday, Jan. 27, 2022, at the London Tea Room on Morgan Ford in St. Louis. The tea room offers a large selection of teas and pastries to pair with the teas. Photo by Hillary Levin, hlevin@post-dispatch.com