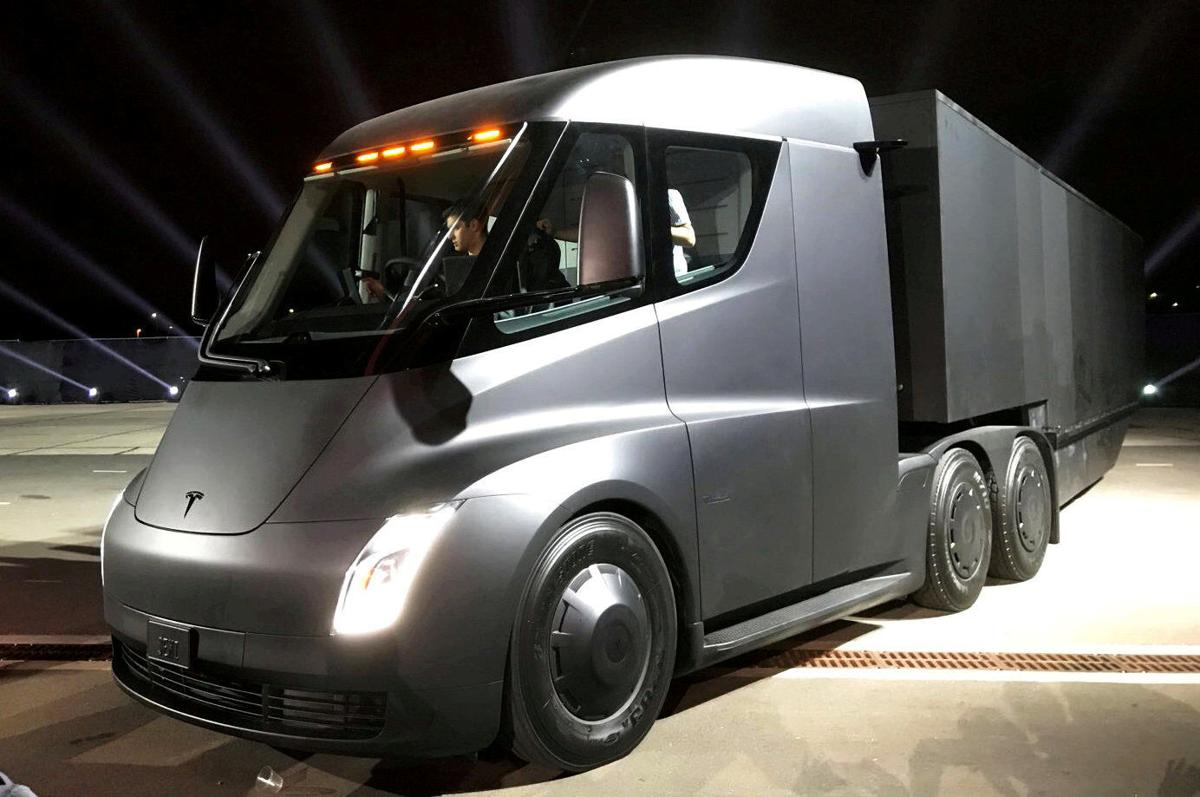 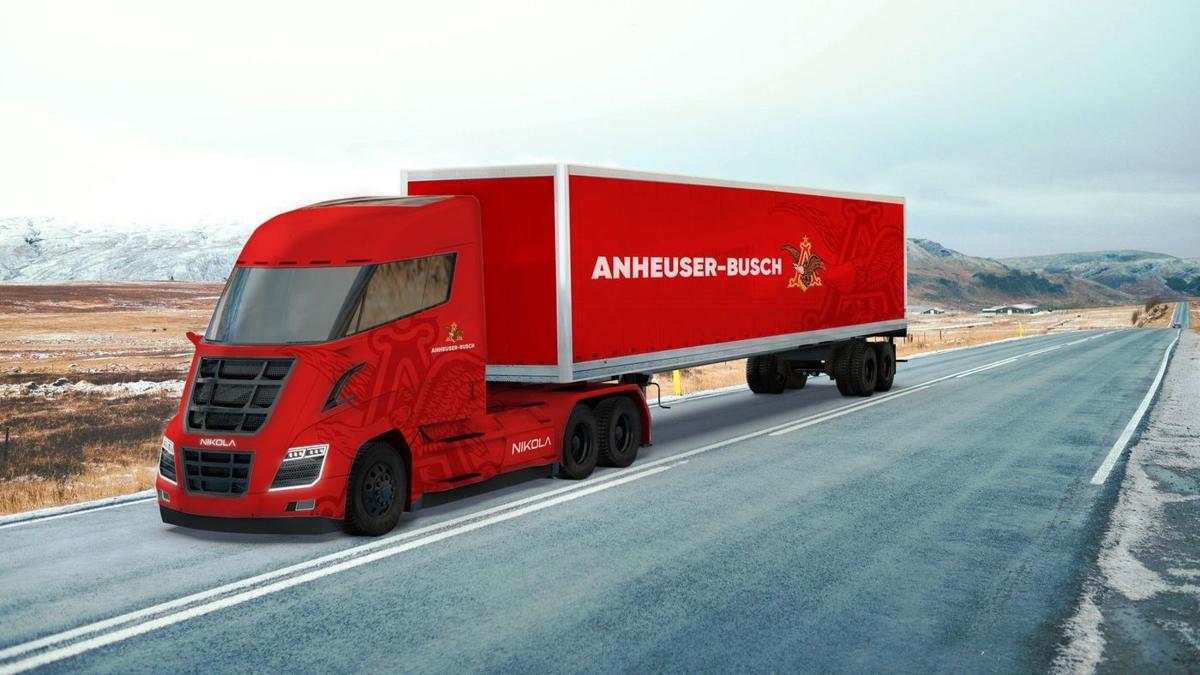 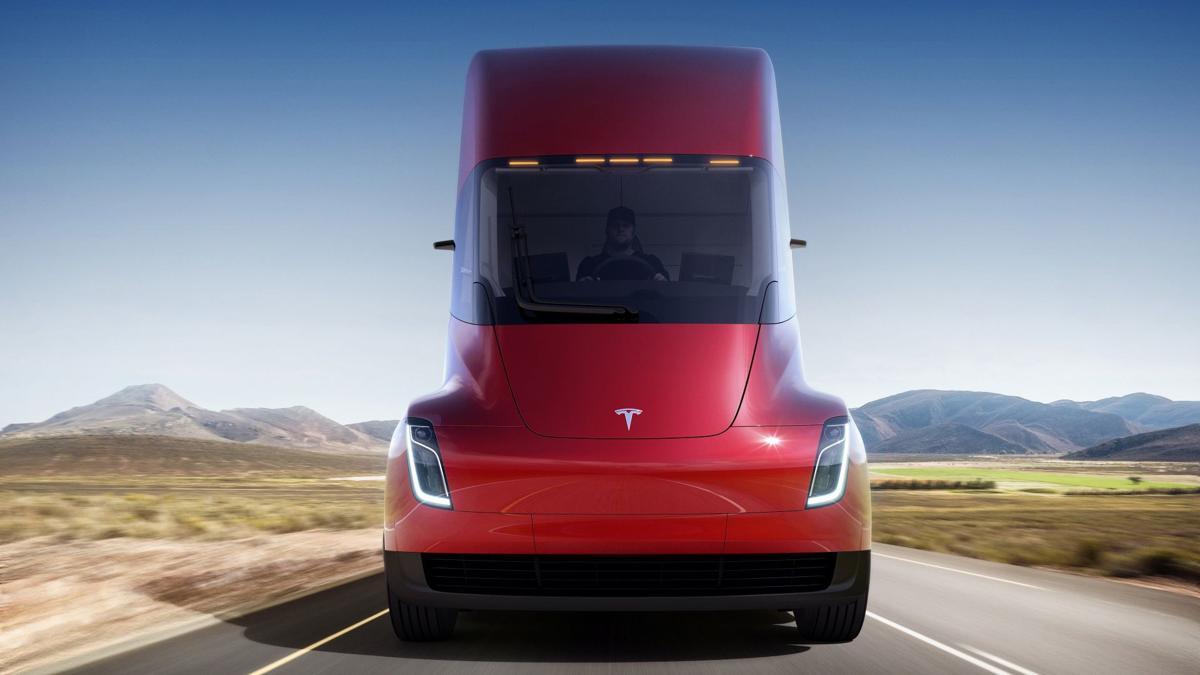 This photo provided by Tesla shows the front of the new electric semitractor-trailer unveiled on Thursday, Nov. 16, 2017. The move fits with Tesla CEO Elon Musk's stated goal for the company of accelerating the shift to sustainable transportation. (Tesla via AP)

Tesla Inc. Chief Executive Elon Musk put electric heavy commercial trucks on the map in November 2017 when he presented the company’s futuristic, battery-powered Semi, booked hundreds of orders and said he would start delivering the vehicles by 2019.

Now, 2020 looks like the big year for electric big rigs. Incumbent truck makers are accelerating their electric truck projects toward launchings that year, while Musk told investors in June that production of the eye-catching Semi freight hauler should begin “basically (in the) first half of 2020” instead of 2019.

Driven by regulatory pressure to cut diesel pollution, commercial truck makers have made a flurry of fresh announcements to deliver battery electric or hydrogen-fueled vehicles. They have landed orders from big fleet operators such as Walmart Inc., United Parcel Service Inc. and Anheuser-Busch InBev, which has its U.S. headquarters in St. Louis.

The challenge is gauging how big the market for electric commercial trucks will be, especially outside of China.

The limited range of most first-generation electric or hydrogen commercial trucks and a lack of charging infrastructure threaten to limit sales to short-haul operations.

In China, regulators are considering a long-term plan to replace 1 million diesel big rigs with cleaner trucks, including electric models, and some Chinese ports and cities are banning diesel trucks, which could significantly boost sales.

In the United States, the outlook for electric truck demand is cloudier. Some analysts estimate that by the mid-2020s, U.S. annual electric truck sales may number only in the hundreds. Over the last 12 months, North American diesel and so-called semitruck orders totaled 497,000 units.

Toyota Motor Corp.’s experience at the Ports of Los Angeles and Long Beach illustrates the potential and the problems for clean truck technology.

The first of Toyota’s working hydrogen fuel-cell trucks was designed with a 200-mile range for daily operations and has already logged more than 10,000 miles running short routes around the ports.

The newer second iteration has a 300-mile range, still well short of the 1,000 miles or more diesel trucks can run between refueling stops.

Toyota has not provided a production timeline, but executive program manager Chris Rovik said that “so far we feel confident the technology is absolutely applicable to this type of use case.”

Fueling infrastructure is a major headache for electric and hydrogen trucks.

Battery electric trucks can take hours to recharge, and charging stations are scarce in most U.S. states. Hydrogen trucks can be refueled in about the same time as a diesel truck — but hydrogen refueling stations are even rarer, with most concentrated in California.

“Fueling infrastructure is a very important first step,” said Chris Cannon, chief sustainability officer for the Port of Los Angeles. “The trucks may work great, but if they can’t get any fuel they can’t operate.”

Last month, the California Air Resources Board announced $41 million in grants to the port toward building 10 hydrogen fuel-cell electric trucks to be developed by Toyota and Paccar Inc. unit Kenworth. The grant will also partly-fund two new hydrogen fuel stations to be built by Royal Dutch Shell Plc.

Most manufacturers see short-haul routes such as drayage services to or from ports or rail yards as likely first adopters of electric or hydrogen trucks.

“We think the first applications are going to be shorter haul,” said Denny Mooney, Navistar International Corp.’s vice president of engineering. “We’re going to start out where the business makes sense.”

Tesla customers such as Deutsche Post unit DHL, which has ordered 10 Semis, say they could save tens of thousands of dollars on maintenance and fuel annually.

CEO Musk said the Semi’s range could hit 600 miles. But a spokesperson said running uphill with air conditioning on or running other appliances would cut that range. Many modern 18-wheelers contain televisions, refrigerators and other appliances.

Package delivery giant UPS has preordered 125 Tesla Semis and will use them on daily routes hauling packages between hubs and on UPS Freight routes between businesses — mostly shorter routes.

“In many ways we are ideally suited to be an early adopter of this technology because we don’t have much long-haul business,” UPS spokesman Glenn Zaccara said.

Tesla is working with potential customers including UPS, Pepsico and Anheuser-Busch to build charging stations at their facilities.

Nikola Motor Co., a startup offering a fuel cell truck, has ambitious multibillion-dollar plans to build 700 U.S. hydrogen fueling stations over the next decade, starting along the major routes of Anheuser-Busch, which has ordered up to 800 trucks, says CEO Trevor Milton. Nikola has secured funding for those stations, he said.

This photo provided by Tesla shows the front of the new electric semitractor-trailer unveiled on Thursday, Nov. 16, 2017. The move fits with Tesla CEO Elon Musk's stated goal for the company of accelerating the shift to sustainable transportation. (Tesla via AP)