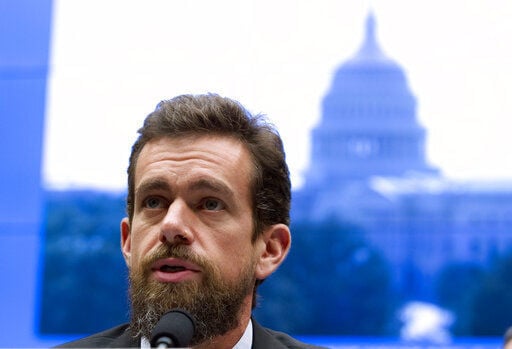 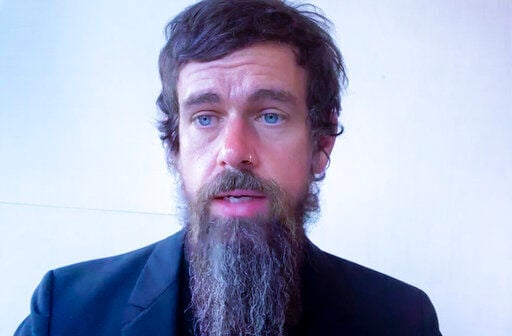 In this Wednesday, Oct. 28, 2020, file photo, Twitter CEO Jack Dorsey appears on a screen as he speaks remotely during a hearing before the Senate Commerce Committee on Capitol Hill, in Washington.  (Michael Reynolds/Pool Photo via AP, File)

Twitter Inc.’s decision to suspend President Donald Trump’s account will test a truce made last year between CEO Jack Dorsey and top shareholders of the social media company that allowed Dorsey to remain in the top job.

In early 2020, Dorsey faced calls from Elliott Management Corp. to step down, after the hedge fund argued he was paying too little attention to Twitter while also running payments processing company Square Inc. He fended off this pressure by giving Elliott and its ally, buyout firm Silver Lake Partners, seats on Twitter’s board.

Since then, Twitter shares had risen more than 70% as of this past Friday — the day Twitter suspended Trump — as users flocked to the app for news in the wake of the COVID-19 pandemic. Yet its stock has dropped 11% this week amid investor concerns that banning Trump would alienate some of his 88 million followers from the popular social media platform and trigger a new push by lawmakers to regulate it.

An agreement that prevents Elliott and Silver Lake from seeking to influence Twitter’s content moderation and user policy expires this spring. The two investment firms declined to comment on whether they would seek to intervene once the agreement expires. Twitter did not respond to a request for comment or make Dorsey available for an interview.

Elliott’s founder, Paul Singer, is a major financial backer of Trump’s Republican Party. The hedge fund took a 4% stake in Twitter when the stock was hovering around $30, and is still in the black with the shares now trading at around $47. Silver Lake invested $1 billion in Twitter’s convertible bonds that give it the equivalent of a 3% stake.

Analysts and investors said the impact of the ban on Dorsey’s standing with investors will hinge on whether the move weighs on the company’s longer-term growth prospects, and that the chances of a regulatory crackdown on the app were difficult to assess. Many said, however, that they expected most Twitter users to remain on the platform and top shareholders to stick with the company.

“We think other Tweeters can replace Trump, and note that since Nov. 17, Trump’s follower count is down by about 180,000, and President-elect Biden’s is up by over 4 million,” Bank of America analysts wrote in a note.

The reaction of advertisers, from whom Twitter derives the bulk of its revenue, will be key. Many are drawn to the platform because of its high user “engagement,” a measure of how active and involved people are when they use the app, and are fearful of being mired in controversy, said Mark Douglas, chief executive of SteelHouse, which provides advertising software to help marketers reach audiences across TV, Web and mobile media.

Advertisers often pull their ads in times of political or cultural turmoil, such as the aftermath of George Floyd’s death in May. Twitter has acknowledged this risk, warning investors in October that the U.S. election could affect its ad sales.

“We just worry that last week’s news flow will remind advertisers how dark of a sewer that Twitter’s environment truly is,” said Michael Nathanson, an analyst at MoffettNathanson.

Some investors said Dorsey could argue he was left with no choice but to suspend Trump after his rally of supporters in Washington, D.C. seeking to overturn the outcome of the U.S. election led to the storming of the U.S. Capitol and the deaths of five people. Other internet giants, such as Facebook Inc. and Google owner Alphabet Inc., also cracked down on content produced by Trump and his supporters.

“We think Twitter is undergoing a turnaround and will show very nice growth numbers,” said Sahm Adrangi, founder of Twitter shareholder Kerrisdale Capital Management. “Replacing a CEO in the middle of that effort would interrupt all of those good things.”Additional reporting by Ross Kerber in Boston and David Randall in New York.

Liz Weston: How the pandemic has shaken up retirement

While some employed older workers look forward to retiring when restrictions ease, others say teleworking has made staying on the job more tenable.

In this Wednesday, Oct. 28, 2020, file photo, Twitter CEO Jack Dorsey appears on a screen as he speaks remotely during a hearing before the Senate Commerce Committee on Capitol Hill, in Washington.  (Michael Reynolds/Pool Photo via AP, File)